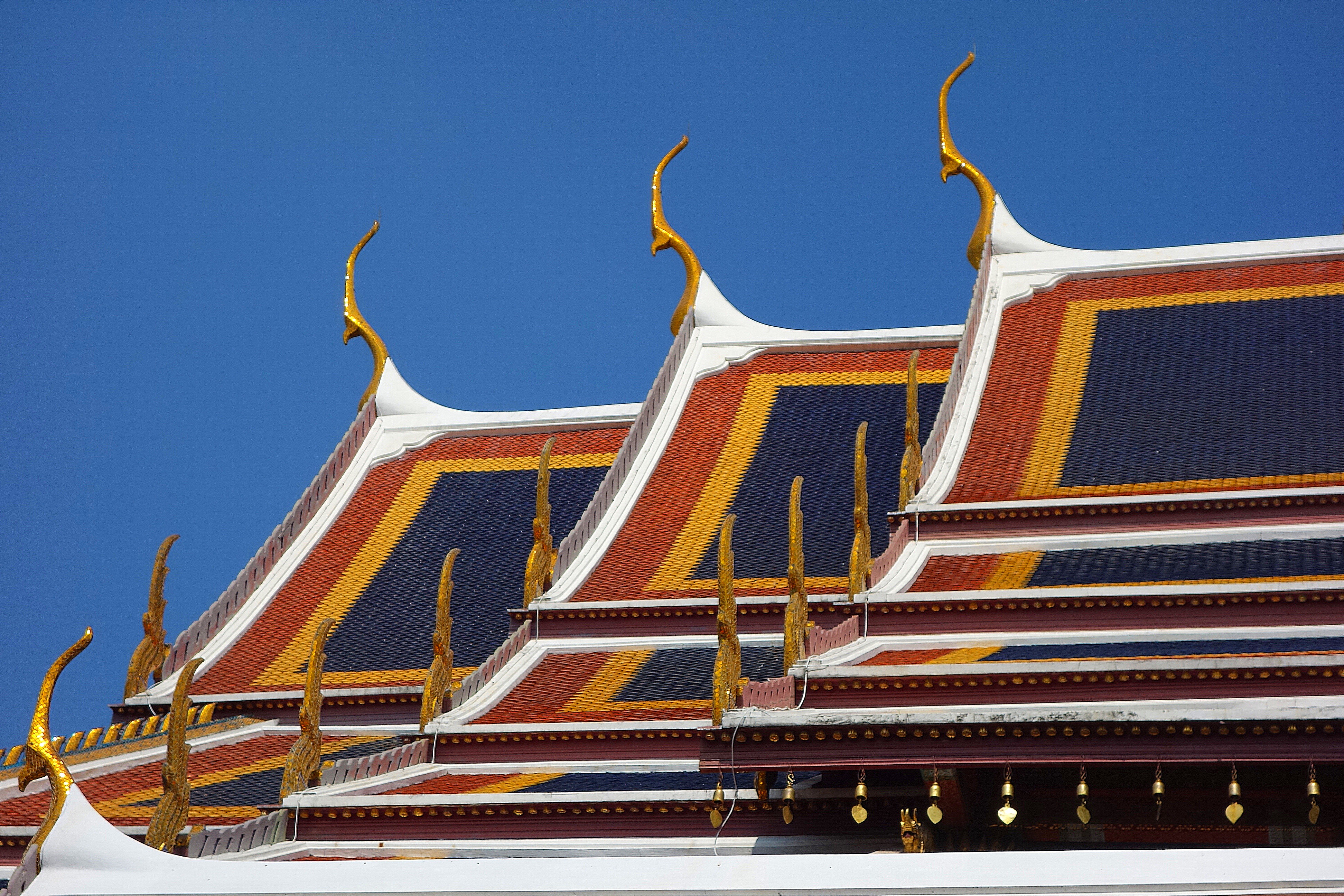 After almost 18 hours in transit, we finally made it to Thailand.  Can’t say the trip was quick, or especially comfortable, but the connection works…  First, there was a flight from Munich to Frankfurt, which is a joke in itself, as the total flying time barely reaches 30 minutes.  Gives you a deceitful feeling that walking could have been faster…
Then a couple of hours in transit in an airport full of crying toddlers, the highest concentration of which was alarmingly right at the gate to the flight boarding for Bangkok.  This looked wrong – I was dreading 11 hours crammed into an airplane seat as a grown-up in wonderful company.  The idea of spending the same amount of time in the same space with a crying baby on my lap would be absolutely horrifying.  The Mommies and harassed-looking Dads waiting to board the plane did not seem to mind. It’s not like they had a choice, anyway…

Another surprising thing was an unusually high number of names on the waiting list – over 20!  A family with the last name of Hoffman left an especially lasting impression – a stressed-out Dad, a fidgety Mom, and three offsprings aged between 2 and 7.  All three cranky, whiny, and in particularly shitty predispositions towards everything and everybody around.  The family’s name was called up 3 times, but consistently remained on the waiting list.  Judging by the fact that they were not spotted anywhere on the place after take-off, they must have spent the night in Frankfurt.

11 hours in coach, in the very front row behind the partitioning separating it from business, with no possibility to stretch out our legs, were far from humane.  Why aren’t we the children of billionaires?…  Nevertheless, the plane diligently delivered us to Bangkok overnight, and unloaded there into the lunchtime of the following day.  Our destination was warm and sunny, and did not look scary at all.  Huge, brand-spanking new, and very well organized airport, fast baggage service, taxis lined up at arrivals to pick up dazed and disoriented tourists, friendly-looking and smiling people – all in nice contrast to many places I had dubious pleasure to visit.  Despite my initially gloomy premonitions about Asia, there were no immediate scamming or mugging attempts either.

Considering my virgin status in regards to the continent, and the desire to have at least a rough plan of action for the beginning of the trip we booked a hotel for two nights in Bangkok in advance.  By local standards (which were not especially high: the ultimate majority of visitors stay in hostels, or simply drink the nights away in clubs and bars), our lodgings were quite fancy and boasted a shower and toilet en suite, functioning Internet connection, and clean bedding.  I was sure luxury won’t last throughout the whole trip, but it was nice to have some at the beginning, to ease the pain of diving into the unknown.  Getting a bit ahead of myself, these expectations did not prove true either.

We were not planning to stay long in Bangkok, but according to all guidebooks it was worth seeing at least once.  Considering the fact that the plane brought us right there, we decided to take a look. Having arrived at lunchtime, and made it to the hotel by early afternoon, we spent the evening walking around the neighborhood, trying to adjust to the weather and get into the holiday mode.  The hotel was located in an old part of Bangkok near Khao San Road, famous for its buzzing night life, rave discos, shops full of fake Versaces and Pradas, and other attractions of similar sort.  All of the above was present, as promised, plus some extras: a live break-dance show, performed in the middle of the street by a group of skinny and seemingly boneless teenagers.  We were sitting in a small bar with a band playing good rock-n-roll and blues, and the teenagers were performing bone-breaking pirouettes right outside it on their heads, hands, and God knows what else to rock-n-roll, which only added to the surrealistic atmosphere.

In an attempt to get rid of the side-effects of an 11-hour flight, we also tried the local art of massage, offered in abundance on every corner.  The results exceeded all expectations – after half an hour, during which a tiny Thai girl walked all over my back and shoulders, all signs of lengthy confinement in a tight space disappeared, and the shape of my body no longer resembled an airplane seat.

As for the shops, full of fake Versaces and Rolexes – all true. In addition to T-shirts, boxer shorts, suits and watches with designer labels, they also offered fake driving licenses of all countries of the world, press passes and other handy documents.  These were advertised openly and on every corner by underage guys on little fold-up chairs, who printed the desired paperwork off their iPads right there. The documents will hardly survive close scrutiny, but were quite popular with tipsy tourists of all walks of life.

The first day turned out to be quite long, even without counting in the flight time.  Downtown Bangkok does not go to bed early, and the disco pulse, as well as numerous live bands competing with each other in the street bars could be heard in our hotel room loud and clear till 3 in the morning.

Still tired after the musical night, we spent the following day sightseeing.  Thailand has been extremely unfortunate in regards to its world fame – everybody heard about sex tourism, rave discos, and quality pot on exotic islands and beaches.  At best, visitors to the country are looking for a good massage, and cheap tasty food. For some reason, centuries-old Thai culture and impressive artistic miniature grandeur seem to be completely ignored.  Even dirty, poor, and generally unfriendly India attracts pilgrims striving for “culture”!…  While incredibly friendly, peaceful, and highly cultural Thailand has been forever branded as the “Sex Tourism Mecca“!…

Speaking of miniature grandeur – this reminds me of my younger days, spent guiding groups of tourists through the State Hermitage Museum in St. Petersburg.  The total disinterest of all Asian visitors to Rembrandt & Co was as surprising and shocking, as their overwhelming joy over some tiny ivory box, or a wood-carved bench collecting dust in the corner.  This generalizes Asian art quite well. Painting did not really make it here, while applied arts flourished and reached sky-high levels.  People built impressive temples, and whole towns, decorated all over with mosaics, with doors several stories high, covered with mother-of-pearl ornaments, and towers covered in tiny flowers made of pieces of glass and mirrors, reaching into the sky.  Those were our impressions from visiting the Grand Palace in Bangkok, along with a couple other temples, the interior of one (Wat Pho) completely taken over by a golden Buddha, the size of several football fields, towering over the visitors to a couple storeys high, lying on his side in a relaxed pose.

Bangkok also impressed with the good looks and thin frames of its police and military force.  Local road police were directing traffic in white gloves, and were dressed in impeccably clean and pressed uniforms in +40C heat.  All policemen we’ve seen could also boast lean and fit figures of magazine cover models.  We have not spotted a single fat cop!  Quite in contrast to many other countries, where the situation with the size and weight of law enforcement officers makes you remember the proverbial “it’s easier for them to shoot you than chase after you” warning.

We also happened to be in Bangkok in the middle of political unrest, which represented itself by people gathering quietly on the main square in the evenings after working hours, chanting songs, and looking extremely peaceful.  The military forces, gathered outside of the square, did not wear white gloves, but could easily compete in good looks and fitness with the police.

Street traffic was, as expected, crazy, but there was some logic to this madness. In all seeming chaos there were no accidents.  Cars and buses squeezed into tiny alleys among pedestrians, along with impressively large motorbikes, scooters, and other exotic (but always motorised) means of transportation.  Somehow, there were no donkeys to be seen…

A lot of local cars, and most taxis run not on petrol, but on propane. Which has a visible and positive result on the environment. In stark contrast to Bangalore in India, which I happened to pay a fleeting visit 5 years ago to, the air in Bangkok did not smell of kerosene, and there was no cloud of black smog lingering above you.

Street food can be consumed without much fear – the city is full of little food carts, filled with noodles, shrimps and all sorts of other soy beans, which the cart owner turns into a delicious meal in a matter of seconds right in front of you.  Competition is high, and street vendors try to outdo each other in culinary arts.  True, you can also see fried caramelized scorpions and other arthropodic Thai beasts on offer, but you don’t have to eat them.  All this is being offered with enviable zeal on every corner, just like the equally useless Bavarian “chachka” in Munich during the Oktoberfest.  Which only proves the universal predictability of human nature: depending on the percentage of alcohol consumed, a drunk tourist would buy anything.

A little more than 24 hours in Bangkok, and the impressions  already managed to fill a couple of pages!… On the following day, we were planning to continue our exotic travels – at 7 in the morning a bus was going to pick us up and take in the direction of Cambodian border. There we hoped to get all necessary visa formalities done, and continue to Siem Reap, situated near one of the oldest cities on planet Earth – ancient town of Angkor Wat, and our interim destination.  If we manage to survive an 8-hour bus trip and won’t be eaten on the Cambodian border, the story will be continued…