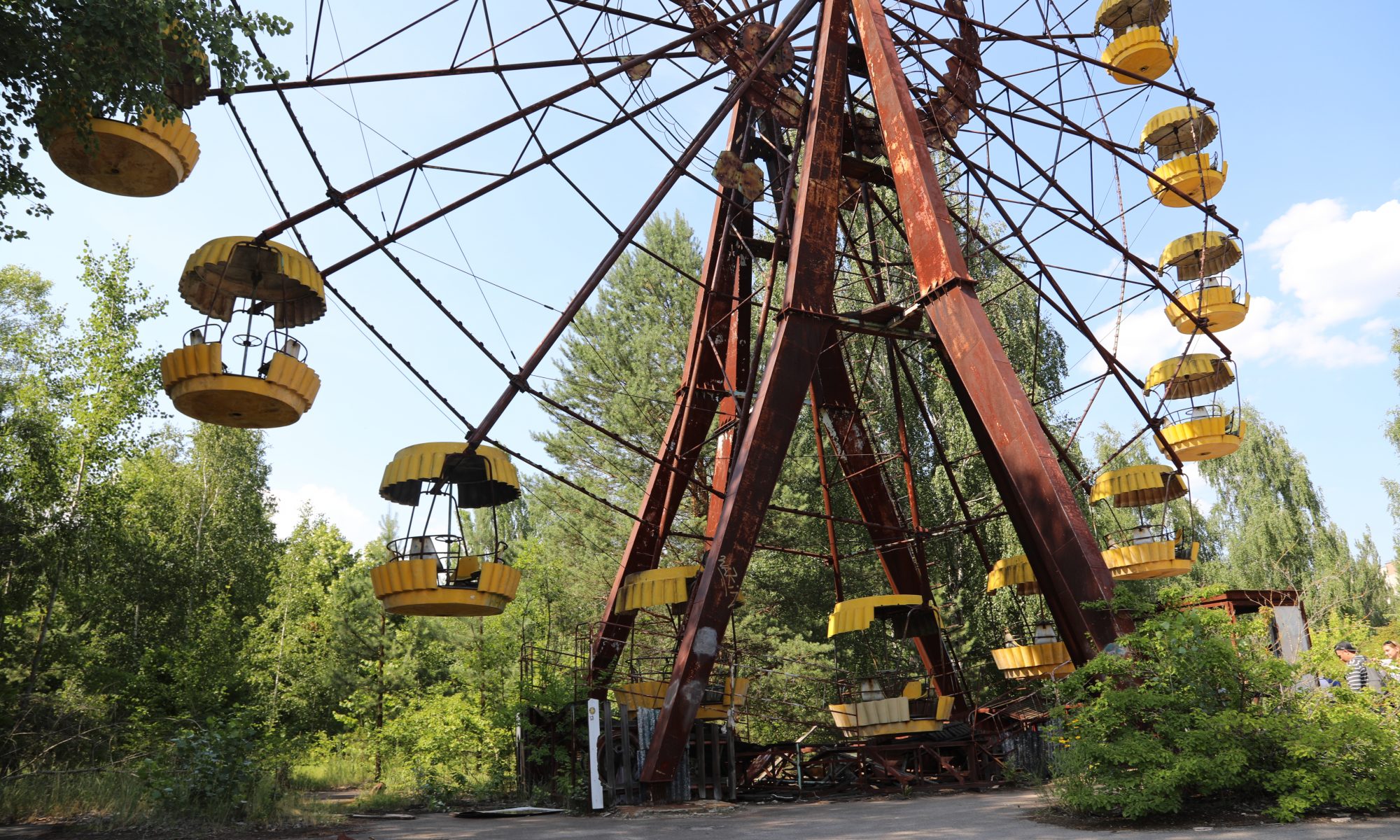 Vacations in the mountains or on the beach?  This is last season’s fashion! Follow the path of true adventure, and visit the Chernobyl Exclusion Zone – a 30-km exclusion area around the site of the Chernobyl nuclear reactor disaster.

33 years ago, at 01:23 in the morning on April 26, 1986 reactor #4 of the Chernobyl Nuclear Power Plant blew up as a result of an incorrectly conducted safety test, causing the meltdown of the nuclear core, and releasing huge amounts of highly radioactive materials into the air.  This created one of only 2 nuclear energy disasters rated at the maximum severity classification level 7 (the other one was the Fukushima Daiichi nuclear disaster).  The Soviet authorities at the time denied the accident not only to the rest of the world, but to its own citizens.  More than a 100,000 people in the nearest towns and villages remained in the highly contaminated area for over 36 hours after the accident, and were exposed to lethal doses of radiation before the evacuation started.  When it did, people were told this was a temporary measure and were instructed to take only documents and basic necessities, leaving all their belonging behind. They were never allowed back.

Next came the “liquidators” – firemen, army soldiers, reservists and regular power plant workers, who were thrown into the midst of the nuclear inferno, where electronics and machines broke down due to high level of radiation.  They were not informed about the nature of the disaster they were called to fight, nor were they equipped for doing so.  Nicknamed “biorobots“, most of them died either right away, or over the period of the following years due to all sorts of health problems caused by exposure to inconceivably high doses of radiation.

Now, the Chernobyl Exclusion Zone remains a time-capsule of the Soviet era – a haunting amusement park, a monument to the people who left, and an environmental recovery zone, where nature is reclaiming its space.  The 30-kim Zone covers an area of about 2,600 km2, and visitors are allowed in the Zone only if accompanied by guides of several tour companies accredited with the Zone administration, who also arrange for entrance permits and transportation. Before you ask – it is relatively safe. During a 2-day trip to the Zone, one receives the amount of radiation equivalent to a one-way transatlantic flight. The visitors are also provided with a Geiger counter that shows level of radiation, and are screened for radiation when exiting both at the 10 km checkpoint and at the 30 km checkpoint. If you respect the rules and don’t do anything stupid, like roll on the ground (which still remains highly contaminated), or pick up souvenirs to take home, you will be safe and won’t glow in the dark upon return.

I can honestly say, that the 2-day trip to the Zone was one of the most bizarre, and most memorable trips I have ever done.  We went to Chernobyl in a small, 6-people group of friends, and had a chance to see the Chernobyl Nuclear Power Plant per se (with the sarcophagus, covering the infamous Reactor #4), visit the ghost town of Pripyat (once a model Soviet city, built to house 50,000 people supporting the operations of the power plant), and come up close to the gigantic and super-secret Duga Radar facility (an over-the-horizon radar (OTH) system which was part of the Soviet missile defense early-warning radar network). It was the Radar facility and the Pripyat ghost town that made the most unforgettable impressions.

The first thing you realize in the Zone in general is how quiet everything is. You hear nothing, but the wind and the birds. No traffic noise, no people, none of the sounds you normally associate with human habitat.  When you enter Pripyat, at first you don’t even realize you are actually in a town. We were there in June, and with all the trees and leaves around, we had a complete sensation of being in a middle of a very dense forest. Only when our guide pointed out the multistoried apartment blocks hidden by the nature happily re-claiming the area, did we notice them.

Getting inside the buildings is not exactly legal, but still possible, and facilities like School #2, or the Hospital Complex #126 give you a glimpse into the Soviet life, forever frozen in time in this ghost town. I even found one of my history school books from the 80-es on the floor of one of the classrooms in the school.

The left-over personal belonging of residents were collected and buried in the aftermath of the disaster, to prevent looting and further contamination spread. Without people or their personal items, the place looks empty and spooky, but the spirit of the 80-ies is still there.

The Duga Radar was impressive due to its sheer size. A huge steel mega-structure with the two out of the original three antennas still standing: 1st 150 meters high, and 550 meters long, 2nd 80 meters high and 220 meters long. The third, a much smaller circle antenna was dismantled and looted years earlier. The radar system used to broadcast a sharp tapping sound, which earned it the nickname “Woodpecker,” and was so powerful, that the sounds disrupted legitimate radio broadcasts and communications all over the world. Ultra-high-tech when it was built back in the 70-es, it is now horribly outdated (an average iPhone contains more technology than this gigantic structure), and stands abandoned as a remnant of the long-gone era.

We also went inside the huge concrete dome of the un-finished cooling tower of reactor #5 – it was being built when the neighboring reactor #4 blew up, and any further construction works stopped. The echo inside was unreal – bouncing off the slopes of the cooling tower several times before dying out, it sure added to the surrealistic magic of the place.

Several tour companies specialize on the trips to the Zone, with the oldest one being “SoloEast Travel“. The 2-day trip organized by them, and our guide Igor was a truly amazing, heartbreaking and unforgettable experience.

The Zone is a one of a kind place, and if you want to visit – do it soon! The buildings in Pripyat, initially designed to last for 25 years won’t last long, and will soon either fall apart, or will get swallowed by the surrounding forest.