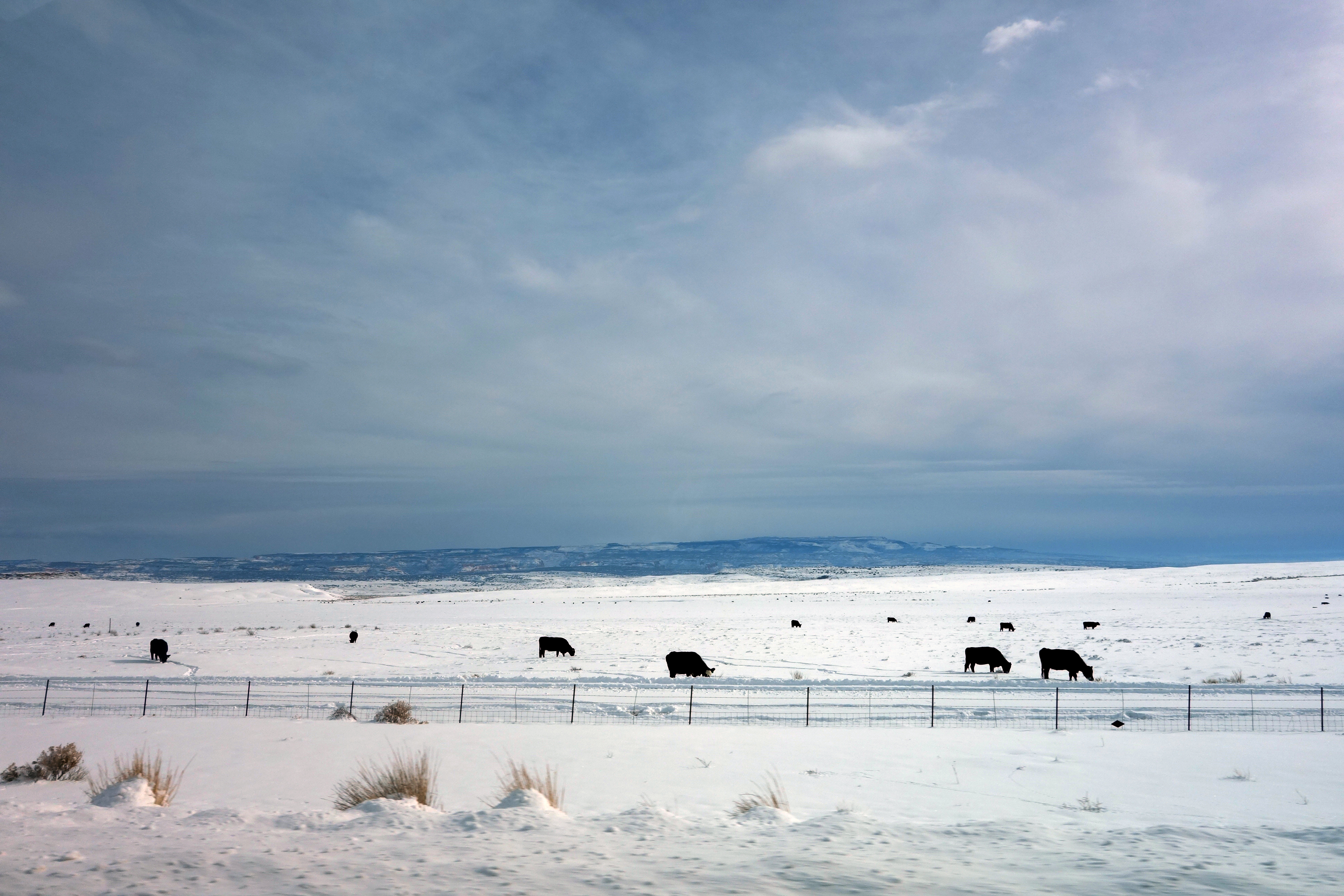 Colorado was not much to write home about – all I remembered was bitter cold and snow.  However, the sole fact of escaping Utah called for a celebration, and having spotted the first joint that looked like it might have a liquor license, we landed there.  The place turned out to be a Mexican restaurant, and the wine that WAS present on the menu, was probably a rather disgusting liquid, but at that point in time there was nothing better in the world for me.  Birthday was toasted in with a glass of red wine!

Not willing to take any further risks, I insisted on stopping at the nearest liquor store to stock up.  The place proudly advertised the fact that they had moonshine.  I was not quite ready for that, but bearing the sad experience of Utah in mind bought two bottles of Australian red wine.

In addition to the expected mountain skiing business, Colorado turned out to be quite famous for other sporting activities, such as mountain biking.  Apparently, every summer hordes of biking fans stream there from all parts of the States, and even Europe.

Apart from the long-awaited glass of wine, Mexican food, snow and cold, Colorado did not leave any other memories.  Oh yes, on the way to our next pit stop (right on New Year’s Eve), we spotted a remarkable number of cars in ditches on both sides of the road.  Ok, it was snowing quite heavily, bordering on snowstorm, and the road was icy and covered with snow, but the number of vehicles that got off the road was still surprising.  Looks like in all countries and climate zones the short- or long-lived summer makes the population completely phase out the winter, erases all skills, and kills even the remote memories of driving in snow…

Kansas did not leave any memories either.  It could have been the inevitable emotional overload by the end of The Roadtrip, but the absence of any sights worth mentioning on the way definitely contributed to this lack of impressions…  In this context, Dorothy’s longing to leave the magic land of Oz and come back to Kansas can only be explained by home-sickness, regardless of what kind of shithole this home is based in.

On the evening of the 1st of January, having driven 4,200 miles, we came back to where we started – Missouri.  This concludes the notes from The Roadtrip itself, but still leaves some random memories of Missouri and the rest of Midwest compared to East Coast, as well as endless musings on the variety and rating of this planet’s shitholes.

Speaking of which…  The term is rather vague, and by far not unique. Apart from the classical one, there are various shit-butt cities, bum-fuck zones, and other middles of fucking nowhere.  However, the classical term “shithole” still remains the most common and widely used, so I will stick to it.

Despite its international and universal nature, the concept of shithole is rather vague, and the world keeps surprising with the sheer numbers, variety, and depth of its shitholes.  At times it almost seems that there is some sort of unannounced competition going on. Just when you happily classify some place as an ultimate shithole (and sometimes confirm your classification through numerous visits and even lengthy stays), the Universe hurries up to prove you wrong and shows you that the place was just a walk in a park compared to what can be!…

A real-life example: during the X number of visits to the Philadelphia area, and more precisely a nearby place called Fort Washington (even though the area never boasted either medieval fortifications, or the flavor of the capital), I formed a strong opinion, classifying it as a shithole.  And yes, compared to Europe in general, Saint Petersburg or even Buenos Aires, it definitely deserves the title.  However, if we start comparing it with, excuse me, Oklahoma, or South Missouri (regardless of what it sounds like, it’s the name of the place, and not a breed of cats), Fort Washington turns out to be a center of culture and civilization.

Well, to be honest, Oklahoma suffered some bad-mouthing on my part behind its back, as I only drove through the place without stopping anywhere.  However, during the drive-through, the area with surprising consistency called for being classified into the “shithole” category.

With Southern Missouri, on the other hand, I had the dubious pleasure of making a closer acquaintance.  Close and personal enough to start suspecting that it was exactly there that at least the North American capital of shitholes was located.  Fort Washington can at least boast of a mall (and not just A mall, but THE 2nd largest one in the US!), has decent restaurants, bars, cinemas, and other landmarks of civilization.

The Southern part of the cat-named state in general, and the town of Sikeston (the birthplace of my road trip friend) in particular, could not boast any such thing.  Here, by the way, is a chance to admire my cosmopolitan nature, intercultural awareness, tolerance, etc. – my road-trip companion was a Republican, a Baptist, and a pro-life gun enthusiast.  It’s actually interesting how these two seemingly contradictory things: the right to bear and use arms and the belief in the embryos’ right to life seem to co-exist in people’s heads…  A two-day nucleus in the body of an underage idiot is sacred, but let’s give an assault weapon to every moron eager to sort out obstetricians, or shoot a dozen or two of their countrymen in a supermarket out of boredom or depression…  And these people teach me how to live!.. To my friend’s credit he did not really rub his beliefs into my face, and fully observed the trip-long peace treaty, that consisted of not touching upon any politically-religious topics.  This undoubtedly helped with avoiding any mutual incidents of manslaughter.

But OK, we strayed away from the main topic.  Now, about the North American capital of shitholes.  There were no decent shops there (I am not even mentioning museums…), and food can be bought only in Walmart.  For those unfamiliar with this giant of commercial industry – this is a place that decent people are afraid to be spotted at even leaving the parking lot, not to mention the horror and shame of being seen inside the premises.  All the indecent people (who, as we very well know, represent the majority) love Walmart with all their hearts, go there dressed in a bathrobe and slippers to stock up on cartloads of frozen carcinogenic shit.  It is in Walmart, that one can see the 400+ pound (200+ kg) people, exhausted by week-longer hangovers, in wild outfits with shopping carts full of frozen pizzas and doughnuts. All this is well summarized in one of the phrases from my bottomless collection of everyday wisdoms:

If you want to eat out, you have only fast-good “restaurants” to choose from.  There is no shortage of Subways, McDonald’s and other smelly and unhealthy joints.  But if you want a steak, or an edible salad – you have to drive to a nearby town for about 40 min.  The town does have a cinema (one).  And a liquor store (also singular).  Malls or department stores selling clothes and shoes are unheard of there.  If you want to buy clothes, you again have to drive to yet another nearby town for a couple of hours, but even there the choice would be at a level of a village variety shop.

And yes, I totally realize that my sarcasm here is totally chauvinistic and out of place. Somewhere in Yuzhno-Sakhalinsk (this is on the Sakhalin Island in the very East of Russia, for those who don’t have a clue), or the Sakha Republic, everything described so far would to this day have been considered the height of civilization.  Had it only existed…  I am hyperventilating over the presence of only one (but huge and open 24/7) supermarket, while in some Petropavlovsk-Kamchatsky (that’s another Russian city on the Kamchatka Peninsular for those interested) food is probably being thrown down from helicopters, and only on national holidays or equally rare special occasions.  Not to mention the miscellaneous Indias and Africas of the world…

BUT, we are talking about America here!  The land of plenty!  And most of all – the country that guarantees everyone freedom of movement!!!  In a situation, where you can choose to live anywhere – from California & Florida, to New York & Chicago, isn’t it strange that people consciously choose to live in places not touched much by the civilization, and which lack in basic primitive conveniences, considered as a given in the majority of areas of that same country?… A mystery, worthy of the archeologists of the future…

This wraps up my procto-anthropological musings, and finishes the notes from the 10-day Mad Christmas Dash across 10 states, covering 4,200 miles and some 6,760 kilometers.