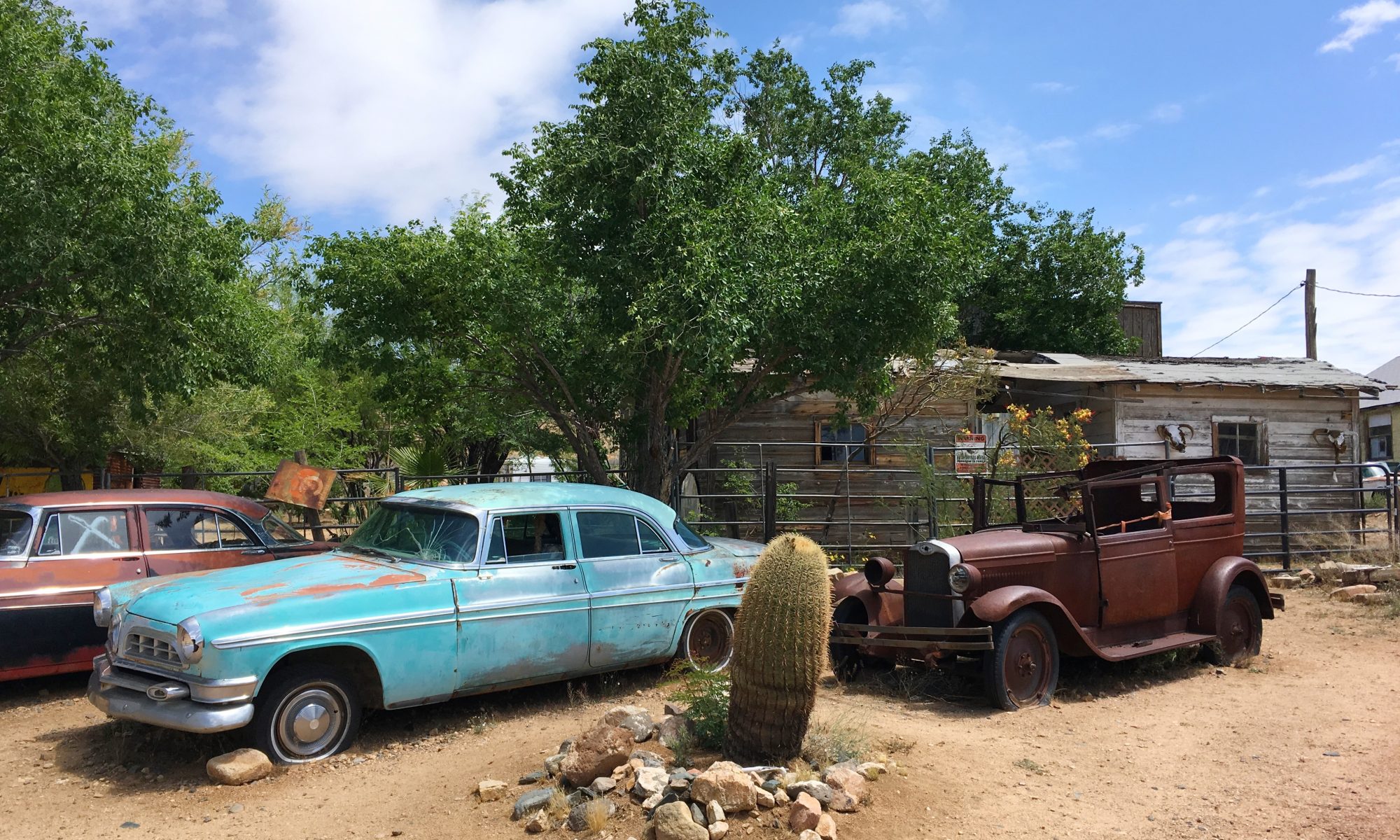 We woke up the next day to clear blue skies, sun and piercing cold.  The bikes had a thin layer of frost on them.  What the hell?….  It was the middle of May, for fuck’s sake!  Whatever…  After all the cataclysms we’ve been through on this trip, a little bit of frost would not scare us away, especially so close to the end point of our trip – the warm California!  We stoically scraped the unwanted ice off the bikes, and took a quick 40-minute dash on the Interstate to Seligman, AZ.

Although initially we only had one place in Seligman marked on our route planner, Angel & Wilma Delgadillo’s Shop, the town turned out to be an absolute Route 66 goldmine, full to the brim with quirky memorabilia.  But all in its turn.

Angel & Wilma Delgadillo’s Shop, the first ever gift shop on Route 66 started out of the owners’ barber shop and pool hall, which in itself would have been enough to make it stand out.  However, the gift shop part was just a side effect of a much more colorful, interesting and proud story of Angel Delgadillo – a native of Seligman, who has lived there ever since 1927, and to whom, in all honesty, Route 66 probably owes the fact that it still exists in people’s memories and is going strong as one of America’s main landmarks.  Seeing the devastation and distress that the opening of Interstate 40 brought to his previously thriving town in 1978, Angel brought together small business owners of Seligman and other Arizona towns along the former historic Route, and in 1987 founded the Historic Route 66 Association, becoming its president.  Through campaigning and lobbying, by November 1987 the Association managed to have the State of Arizona officially christen the stretch of US-66 between Seligman and Kingman as “Historic Route 66”.  By making this stretch historic, Arizona preserved 159 miles of the route, which remains the longest uninterrupted stretch of Route 66 in the country.  And that was just the beginning!…

The freshly-awakened public nostalgia for The Neon Highway helped Angel and the Historic Route 66 Association in their efforts.  They organized car rallies and events, invited celebrities and promoted the Mother Road every way they could.  Eventually, seeing the rising interest in Route 66 memorabilia, Angel converted his barber shop and pool hall into the gift shop.  His father’s 1926 barber chair he had been using for work ever since graduating from the American Barber College in Pasadena, CA still occupied an honorary place in the corner.  Seligman has since become known as “The Birthplace of Route 66”, and Angel acquired the respectable nicknames of “The Mayor of the Mother Road” and “The Guardian Angel of Route 66”.

Even with all the fame and attention (the gift shop is listed at the top of the must-visit places in every history- and guidebook about Route 66), at the age of 91 Angel remains a happy-go-lucky down-to-earth man, genuinely delighted with every visitor to his home-town.  He even occasionally gives shaves and haircuts in his father’s barber chair in the corner of the gift shop!

We weren’t as lucky as to see Angel in person, but were definitely glad to visit the place and honor the man, whose efforts to save his family’s and town’s livelihood turned into a rocket fuel for national and world-wide interest and revival of America’s most famous road.  The place was magic.  It looked like a time-capsule of the carefully preserved years, when the Neon Road was at the peak of its glory.  A life-size cardboard figure of Angel by the barber chair could not replace the original, but added to the general surrealism of the moment.

Much as we enjoyed the shop, we were more than ready for breakfast.  And we had just the place in mind – the Roadkill Café down the main road from Angel & Wilma’s shop. It was found on Google Maps last night by pure accident, and was just the place our empty stomachs and adventurous souls called for.  With a motto of “You kill it, we grill it!” how could it not?!…

Open from 7 in the morning till 9 in the evening, and featuring such amazing dishes as “Flat Cats”, “Smear of Deer”, “Splatter Platter” and “Rigor Mortis Tortoise”, it was all we could dream of on a cold morning.  We opted for the “Awesome Possum” (for me) and “Guess that Mess” (for Nic), and in addition to smart-ass names, the food that showed up on the table without any delays was incredibly delicious.  For the squeamish ones out there – the ingredients did not really contain any possums or tortoises, but were a clever marketing call to everyone’s wild side.  We embraced ours and dug in.

After an hour in this oasis, sated and thawed out, we raided the Roadkill Café’s gift shop, and became proud owners of the hungry vulture T-shirt with the cafe’s motto, a bottle of Tabasco sauce with a simple and clear name of “Death” printed on it, and a couple more nondescript, but equally craved for souvenirs.  It was time to move on…

No Route 66 road trip is complete without visiting numerous abandoned places, businesses and towns that fell victim to civilization moving in in the shape of the Interstate Road system.  We missed quite a few of those due to inclement weather in the first half our trip, and were fully intent on catching up by the end of it.  John Osterman’s Service Station in Peach Springs was next on our list.

From Seligman, we avoided the Interstate and followed the Historical Route 66 through county-side.  It was still chilly, but the thoughts of the Golden State, awaiting us ahead, warmed us up.  That, and the hearty Roadkill Café breakfast, of course!  The Osterman Gas Station was, as expected, still closed, and in all honesty was not much to look at.  It obviously was not the architectural value that made it famous, but something else entirely.  Opened by a Swedish immigrant John Osterman in 1925 as a trading post and rebuilt in 1993 when the realignment of Route 66 called for a larger station with garage, the place remained in operation till 2007.

Unlike Seligman, Peach Springs did not have much to offer.  Even though according to online sources Peach Springs remains the tribal quarters of the Hualapai Indian Reservation, only two businesses keep running – a grocery store and a post office.  We looked around, took a couple of photos, and followed the country roads to the next sight.  It was quite ironic, actually, how THE main highway of the US back in the day could only be considered a minor country track less than a century later.

An easy 20-min cruise brought us to Hackberry General Store still in Arizona, but closing in on California border.  The place was marked as a must-see in all Route 66 guidebooks, and was right on our way anyway.

With the derelict car shells strategically positioned up front with picturesque cacti in-between, old gas pumps, and an astonishing mix of shit cramping the insides of the store, the place was hard to miss. Creepy mannequins were mixed in with old photos, rusty lamps, and mountains of miscellaneous chachka of varied levels of uselessness.  The shop was a dusty twilight labyrinth of narrow aisles and passages, leading from one cramped room to the other.  We were glad to get out, and spent most time taking photos of the exterior.

Still full of the amazing Roadkill Café breakfast fare, we did not really think about lunch.  A pit stop for drinks and a bathroom (we did not have the heart to brave the facilities at the Hackberry General Store), however, seemed like a good idea.  30 minutes down the road we found just what was needed – a bright- and welcoming-looking turquoise & pink Mr. D’z Route 66 Diner with a mint-condition old truck parked in the front.  The food looked amazing, but we could not fit any more in, and opted for 2 big teas with a slice of cake to share.  We sipped our teas, and basked in the bright and kitschy atmosphere of the quintessential Route 66 diner, in operation since 1938.  The menus were made in the style of vinyl records, the walls were peppered with colorful framed photos of old cars, pink seats were bright-colored plastic, and happy faces of Elvis and Marilyn greeted the patrons at the gents and the ladies.

Kingman seemed much more alive and happening than even Seligman – it was also full of Route 66 memorabilia, but other business seemed to be thriving as well.  Gas stations, post offices, diners, even banks were right there, and in full operation.  The trick to Kingman’s prosperity was probably the fact that not only was it both, on the Interstate and Route 66, but also had a railroad going through the town, even having its own train station.  The place was, in fact, named after a railroad engineer, Lewis Kingman, and laying only 50 miles away from the border with sunny California remained an important connecting point between Arizona and California.  The climate was also definitely better than in the heart of Arizona.

Pie and teas in, we move on direction California.  The remaining 58 miles to Needles, CA we opted out of the Interstate, following instead the Oatman Highway, going through the beautiful Golden Valley, and then snaking down at a steady 6% angle, with each mile adding to the warmth of the surrounding environment.  By the time we crossed into California, we had to stop and take off our leathers.  It was suddenly hot.

Needles, CA was busy with road construction, which our ancient built-in Harley GPS refused to recognize, nearly leading us under the roller of a huge construction vehicle at some point, and causing just fury on the part of its operator and a couple of his nearby mates.  We persisted in search of accommodation.  We came prepared – we had 4 relatively central motels and hotels with addresses marked on our road map, and we were intent on finding decent digs for our stay.  Turned out, it was not so easy.

The first place on our list, America’s Best Value Inn, represented a pile of burned out rubble that looked like an insurance claim job (successful or not, it was not our place to judge)…
The 2nd one, a Route 66 Motel, looked more like an undercover brothel snd a drug den, than a motel per se, so we decided to give it a miss.
The 3rd place we called upon, an Imperial 400 Motor Inn was closed down.  We started doubting ourselves.
Luckily for us, though, #4 on the list turned out to be the charm – the Best Western Colorado River Inn hotel not only was open and looked decent, but also had a room for us, and parking for our bikes.  As a bonus, there was a diner next door, where we dragged our tired and hungry asses after a quick shower, and enjoyed a couple of drinks accompanied by a humongous salad with fried chicken.  As a healthy sign, avocado was present on the plate.  We were finally in California!