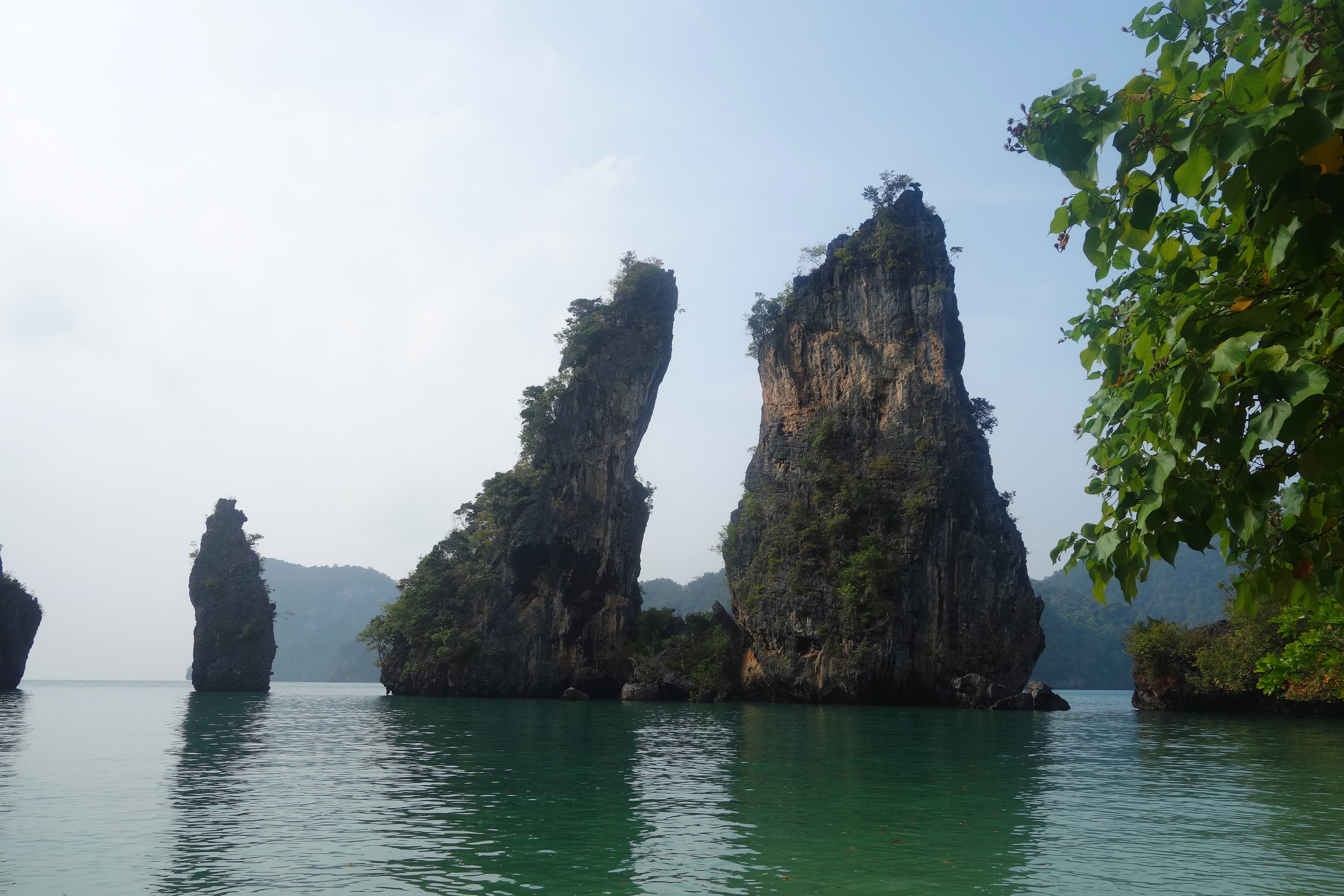 Despite the birthday celebrations and alcoholic excesses with bikers, we actually managed to figure out our further plans, setting our eyes on a Northern island called Ko Yao Noi. According to all guidebooks the island was supposed to be beautiful, quiet, and relatively non-polluted by tourists. The tranquility and absence of hoarders of travelers were all true. Beauty is a relative term, so the guidebooks can be excused. What they shyly forgot to mention, was that the island had no beaches whatsoever. Which explained its quiet nature and lack of tourists. This, however, was verified only upon arrival.

For a change, we did not reach the island by ferry, all tickets to which were sold out by the time we showed up, but instead arrived in style on a speed boat. Generally, we liked the boat much better – it moved quicker, did not make any unnecessary stops, and connected in open waters with all sorts of vessels from fishing boats to ferries, letting passengers cheerfully jump and throw their luggage over.

Ko Yao was green, quiet, and not overburdened by the signs of civilization. The total population – 4.5 thousand people (I had to look this up in Wikipedia – personally, I would not have given it more than a couple hundred), most of them Muslim. So the general friendliness of people, as well as accessibility of alcohol were limited. In general, booze could be found only in one restaurant and in a Rastafarian bar on the beach. And it’s not that alcohol should be an essential part of any vacation… But in cases of any limitations, especially in this area, the stubborn nature gets appalled, and immediately starts demanding exactly the thing missing on the menu…

The low tide during the day turned the perimeter of the island into a swamp, and ocean waters could be seen by the banks only at night and early in the morning. Even though the high tide at night covered up the swamp, the memories of the slimy grime the bottom was made of, stopped any calls for swimming. The three days we spent on the island were literally and figuratively the driest of our Asian vacation. Since Ko Yao itself was not much to write home about, it got remembered due to some completely irrelevant and totally concomitant reasons. Like cows and egrets. The cows were not too numerous, and were randomly placed around the island. Each came in a package with an egret or two. The birds either eat the mosquitoes buzzing around the cows, or fed on frogs in the grass disturbed by them, but the symbiosis apparently worked, for not a single cow was spotted without an egret companion.

Another memorable representative of local fauna was an iguana that happened to be crossing the road while we were scouting out the surroundings. With about 2 meters in length it called for attention, and made us break to the best of our abilities in order not to run over this beauty. The meeting was of a chance nature, and did not leave enough time for commemorating it on a photo, but it left some warm memories.

The island’s Rastafarian business on the beach was a shaky hut made of bamboo and palm leaves, had coconuts and beer on the menu, as well as some other interesting things off it. The owner had the widest smile I have ever seen (either due to absence of any Muslim inclinations, or thanks to the quality of the weed he was smoking), randomly positioned teeth, and a huge collection of wigs (although, maybe those were the scalps of enemies) – from waist-long dreadlocks to an Afro-Boni-M piece, blocking the horizon. At 2-meter’s height, the Rastafarian looked impressive and attracted us from the first minute of making his acquaintance, which we continued throughout our stay on the island.

It was on Ko Yao that purely by accident we met wonderful companions for the remaining two weeks of our vacation. Unloading ourselves and luggage from the speed boat, and arguing with local cab drivers attempting to explain to them which part of the island we needed the transfer to, we ended up in the back of a pickup truck next to a couple with very similar predispositions. They asked where we were planning to land, we cheerfully replied that we had absolutely no idea, they fully supported the sentiment, and the contact was established! While shaking in the truck going through the un-populated jungle, we learned that the couple was of English residence, the guy’s name was Jamie, the girl was called Irina, and neither their looks, worldviews or lifestyles fitted any cultural stereotypes. Jamie spent all his life on the sea, first as a mechanic on ships, and later as an engineer for some complicated deep water drilling equipment for the oil industry. 25 years ago he met Irina when his ship docked in the port town of Yalta on the Black Sea, married her to take her out of the then very Soviet Union, and since then they have been travelling the world together.

The pickup truck unloaded us on the beach, Irina and I sat down with our luggage in a friendly-looking bar, the boys hired two scooters, and went on a scouting mission around the island in search of accommodation. The situation was complicated by the upcoming New Year’s Eve, so everybody who planned celebrating it on the island already settled there, limiting our options. Having spent half an hour over cups of tea in the beach bar, we felt mutual sympathy with Irina, despite common birth roots.

Here, by the way, is another curious fact I noticed during the years of travel. Citizens of most countries are usually happy to meet compatriots away from home, and start cheerfully socializing, feeling mutual attraction. In stark contrast to that, most Russian tourists and travelers are normally suspicious of each other and rarely own up to their origins. If the meeting does happen, some magneto-cosmic force drags the parties apart into the opposite corners of the room, from where they stare at each other without the slightest sign of affection. No socialization, cheering, swapping of jokes, or joint consumption of national alcohols take place… Meeting fellow countrymen “in the big wide open” mostly makes one wary of possible inadequacies in behavior and general “weirdness”. This gives one a very strange and unsettling feeling, similar to that you get when visiting the primate area of a Zoo. With the logical side of your brain you understand, that on a global scale of the Universe you have common ancestors, which makes you ashamed that you are here, and they are there; but at the same time you feel equally embarrassed for these universal relatives, and want to distance yourself from them by all possible means.

But back to the trip. On the following morning after arriving on Ko Yao, thanks to Irina’s relentless energy and organizing skills we left it for the whole day, embarking on a long trip of surrounding waters and islands. As a result, we had a chance to visit the following sights:

On our way back to Ko Yao, we had another adventure in the form of a broken down boat. Technically, it was not the boat that broke download, but it’s engine. Which, however, did not simplify the situation. We were doing our sightseeing not in the crowds of other visitors herded into big tourist ferries, but in a rather authentic manner, on a real Thai longboat. The boat was flat, elegant, with a nose decorated with colorful ribbons, and was powered by a car engine on a long pole, welded to its rear. Depending on size and age, longboats were equipped with engines of varied calibers – from an appliance of a lawn mower to the device that in its pre-maritime period powered a German-made mini-van. Our vessel had a mini-bus engine, and was steered by the son and father crew, with the son doubling up as a guide and translator. Both had unpronounceable names, wide smiles, and throughout the day spent together, showed themselves to be exceptionally nice company. When the boat engine broke down, we were truly and genuinely sorry for them. However, in addition to the boat, the father and son also had a mobile phone, with the help of which they called for help. It arrived in a form of a toothless grandpa in a run-down boat, who escorted us on a rope to the peer.

The quiet island brought more impressions, but these will follow later.