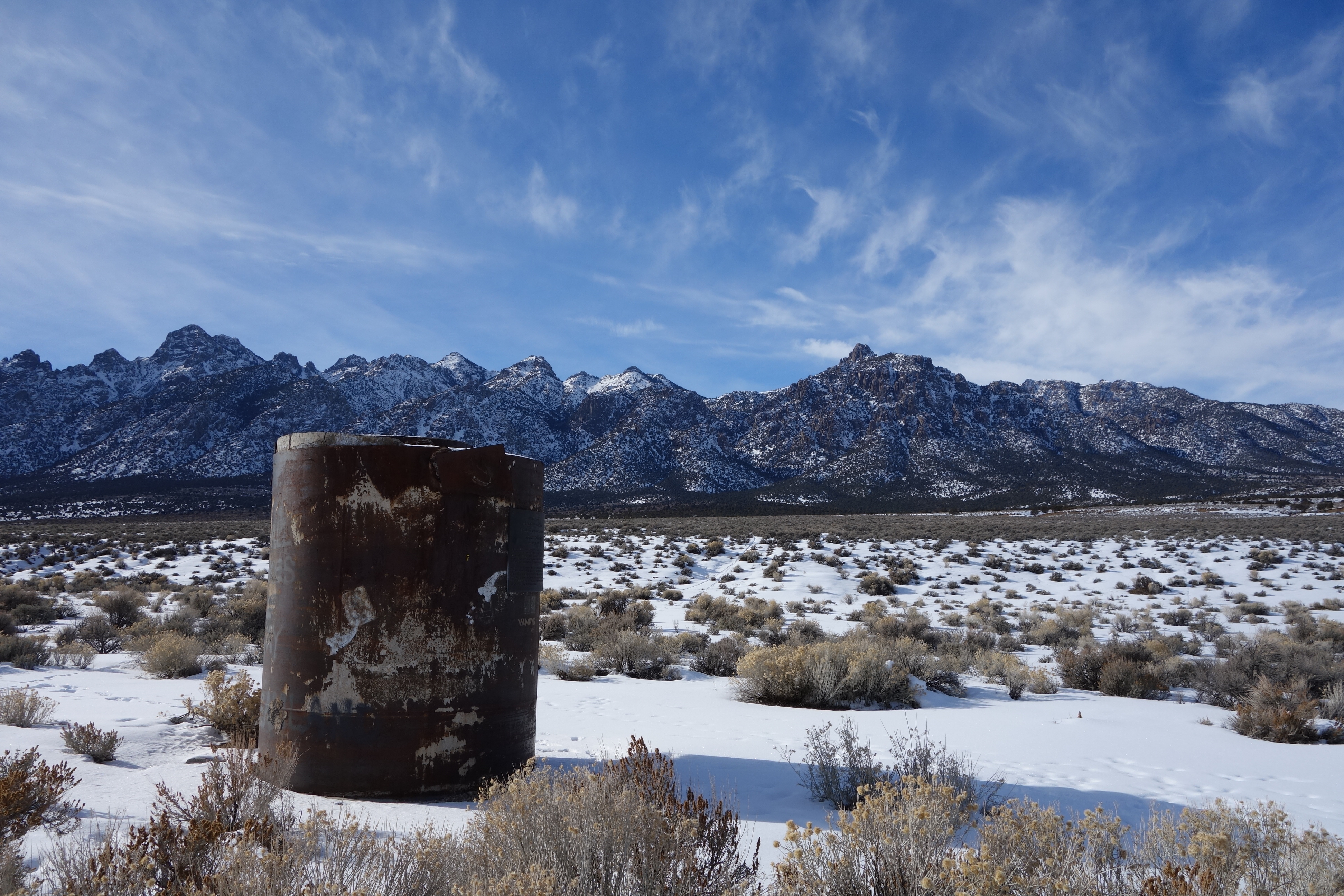 Continuing with the desert part of the story, our next destination was a place known in even narrower circles, than Rachel.

In mid-60-es the state of Nevada in general, and the Mojave Desert in particular were widely used for testing various nuclear-radioactive toys, as part of the popular “whose dick is bigger” Cold War competition between the United States and the USSR. Endless wilderness and absence of curious masses of population presented an ideal ground for these exercises, and to this day continues to attract military-research enthusiasts.

One of the lesser-known, but still epic events within the nuclear research program was “Project Faultless” – underground detonation of a megaton nuclear bomb right in the middle of the Mojave Desert. The reason for this particular test was quite peculiar – ordinarily, hydrogen and other big-ass bombs were detonated much closer to Las Vegas, getting on frayed nerves of one Mr. Howard Hughes, an elderly Texas multi-billionaire, enjoying his retirement in one of the hotels on The Strip. The race for nuclear armament sped up to a point when a bomb was going off in the vicinity of the Desert Inn, a hotel, chosen and then bought by Mr. Hughes for his residence, every three days. A pissed-off multi-billionaire is a force to be reckoned with, and Mr. Hughes‘ angry letters to all sorts of officials, and personally to President Johnson quickly got the attention of the Atomic Energy Commission. They agreed to move the testing site deeper into the desert, which they hoped would reduce the shaking of the ground near The Strip, and calm down the pestering billionaire.

Those conducting the experiment probably could have guessed that its results would not be too cheerful, but the nuclear curiosity combined with military determination and the desire to get rid of Mr. Hughes, got the better of them. The bomb with a yield of 1.0 megatons (“only” about 67 times the energy of the one dropped on Hiroshima) was put a thousand meters under ground, and happily detonated there. The results were devastating: the ground in the radius of several miles collapsed, forming a huge underground cave at the point of detonation. Radiation levels on its bottom were similar to the core of a nuclear reactor and will stay this way for the next couple thousand years.

The force of the explosion pushed the steel pipe used for putting the bomb down almost 10 feet up (initially it was level with the ground) and at the moment it remains the only sign of the past outrage.

This was the sight we intended to find and visit. Which was not all that easy. Armed with GPS coordinates and directions found on the Internet, we drove to the end of the Extraterrestrial Highway, pushed on for another hour down an adjacent road, and then for another 40 minutes along the snowed-under dirt track. After that we had to open up our eyes and start searching for the pipe. Big and tall close up, it was completely lost in the endlessness of the desert. Our tireless efforts paid off, and the pipe was localized. It towered up in the middle of nowhere, surrounded by lame warning signs, blabbering something about petroleum pollution, and notifying the visitors not to drill, dig, or pick up rocks from the site.  Sure… Petroleum…  Just what we thought!…

The plaque on the side of “Project Faultless” (quite an ironic name, considering the consequences…) did explain what it was all about, but only in very general terms.

For the record, even though I did not happen to have a Geiger counter in my luggage, according to all available information the level of radiation on the surface had nothing in common with the insides of a nuclear reactor, and was not expected to have any ugly consequences for visitors to the site. Which is basically confirmed by free access to the epicenter of the past horror. Just in case, I decided to follow the advice of the warning signs, and abstain from excavations in the vicinity of the pipe, or pocketing rocks for souvenirs.

The pipe, however, made an impression, and took a well-deserved place among lesser-known sights of the North American continent. Come to think of that – any moron can go and take a look at the Grand Canyon, but only the rare few would make it to “Project Faultless” in the middle of the Nevada (sorry, Mojave) Desert… Not to mention, that even the existence of the latter is probably known only to a handful of completely fucked up nutters… What can I say – I am proud to join the screwed up minority.

Esoteric and exotic as “Project Faultless” was, it was still a side-effect of the program, and the 2nd main destination after Rachel was Area 51. Since coffee with wine, combined with ogling at the walls at the Little A’Le’Inn and searching for the pipe in the middle of the desert took quite some time, we got down to this part of the program already in twilight. Which only added the spice to the moment.

Area 51 spawned so many legends, stories, and myths, that retelling them all here would be an exercise in futility. The curious are free to browse the Internet in search of truth and folklore. There are dedicated web sites, updated on a daily basis by nutters, chronicling the history and everyday life (real or imaginary – is up to the reader to decide) of Area 51.

The desire to visit the surroundings of this sight (clearly, I was not invited to The Area itself), was partially caused by the curiosity to verify whether everything said about its security and mysteriousness was really as serious and conspicuous as the UFO-nutters tend to believe. Upon verification, turned out that it was.

Area 51 (aka Edwards Airforce Base facility, aka Nellis Bombing & Gunnery Range) is a military base, belonging to US government, and reporting to US Airforce command. At the same time, the Area is guarded by a private security company, protecting the base from those same individuals supporting the websites and legends that for the duration of many years have been stubbornly combing the Mojave Desert for aliens, government conspiracies and various evil plots of inter-galactic proportions. I cannot really vouch for the aliens or inter-galactic conspiracies, but the fact that Area 51 is protected very seriously has been verified through personal experience.

For starters, it is located deep in the desert, about 20 (if not more) miles off Extraterrestrial Highway, in a valley surrounded by mountains. The valley was formed by drying out of a big-ass lake, that a couple of centuries BA (before The Area) represented a nice change to the surrounding rocks and sands.

An inconspicuous dirt road runs off the Extraterrestrial Highway somewhere into the vicinity of the Black Mail Box and disappears into the mountains on the horizon. This was the road we took, hoping to see if not the gates of the mysterious base, but at least something – warning shields, “cammo dudes” in white jeeps (according to the Internet folklore, these particular vehicles are favored by the Area‘s security), anything that would prove the base really exists.

It took us about 40 min driving at pretty high speed in rapidly thickening twilight, when we saw the warning shields on both sides of the road, that continued further into the mountains. The shields were notifying trespassers that continuing down the road would cost $60,000 (!) and more in fines and a minimum of 10 years in prison time. They also stated in no uncertain terms that the use of deadly force within the perimeter behind the shields was authorized and very much encouraged. The cacti in the desert on both sides were generously mixed with antennas, video cameras and microphones, with absolutely no attempt at disguise. The nearest high hill was decorated (just as was promised by the nutters at the UFO websites!) with a big white jeep with two dudes in camouflage with binoculars. When we stopped at the signs on the road, the dudes started the engine of the jeep, and pointed their binoculars in our direction. They looked like they meant business.

I have to admit, that while driving along the Extraterrestrial Highway, and even on the way to the Area, all the stuff I read about Area 51 on the Internet seemed to be just shit and giggles. However, the sight of the white jeep with “cammo dudes” in the darkening twilight in an empty desert, quickly made us change our minds, turn around, and get the fuck out of there. The road back to the Extraterrestrial Highway was driven not just in twilight, but in almost complete darkness. What’s interesting, is that some ten minutes after we turned back at the warning signs, a pair of Xenon headlights flashed up on the dark road behind us, and started closing in in on us with disturbing speed. This became an additional incentive to flooring the gas pedal, and getting back to the highway as quickly as possible. Having followed us for about five minutes the headlights flashed one last time, and disappeared.

The desert left not only great sightseeing memories, but also some of the most remarkable culinary and accommodation impressions. Due to historical allergy to the gaming industry I had no intention of staying in Las Vegas, and we ended up spending two nights in a town of Alamo, that was chosen for its closeness to Rachel and could easily beat up the latter in size and crappiness. Even though the place we chose for accommodation had the ZIP code of Alamo, it was situated well outside the town border in the desert, and represented an oasis of comfort in the form of a dozen of huts with own restaurant and (of all things!) a bakery. The Windmill Ridge of Alamo, was an oasis of comfort and luxury in the desert. Each hut was the size of a spacious hotel room, and had top-notch facilities. All owned by a family that also managed the oasis. Everything was fantastic – from rooms to steaks that melted in our mouths. Our applause and other ways of supporting and promoting small business!