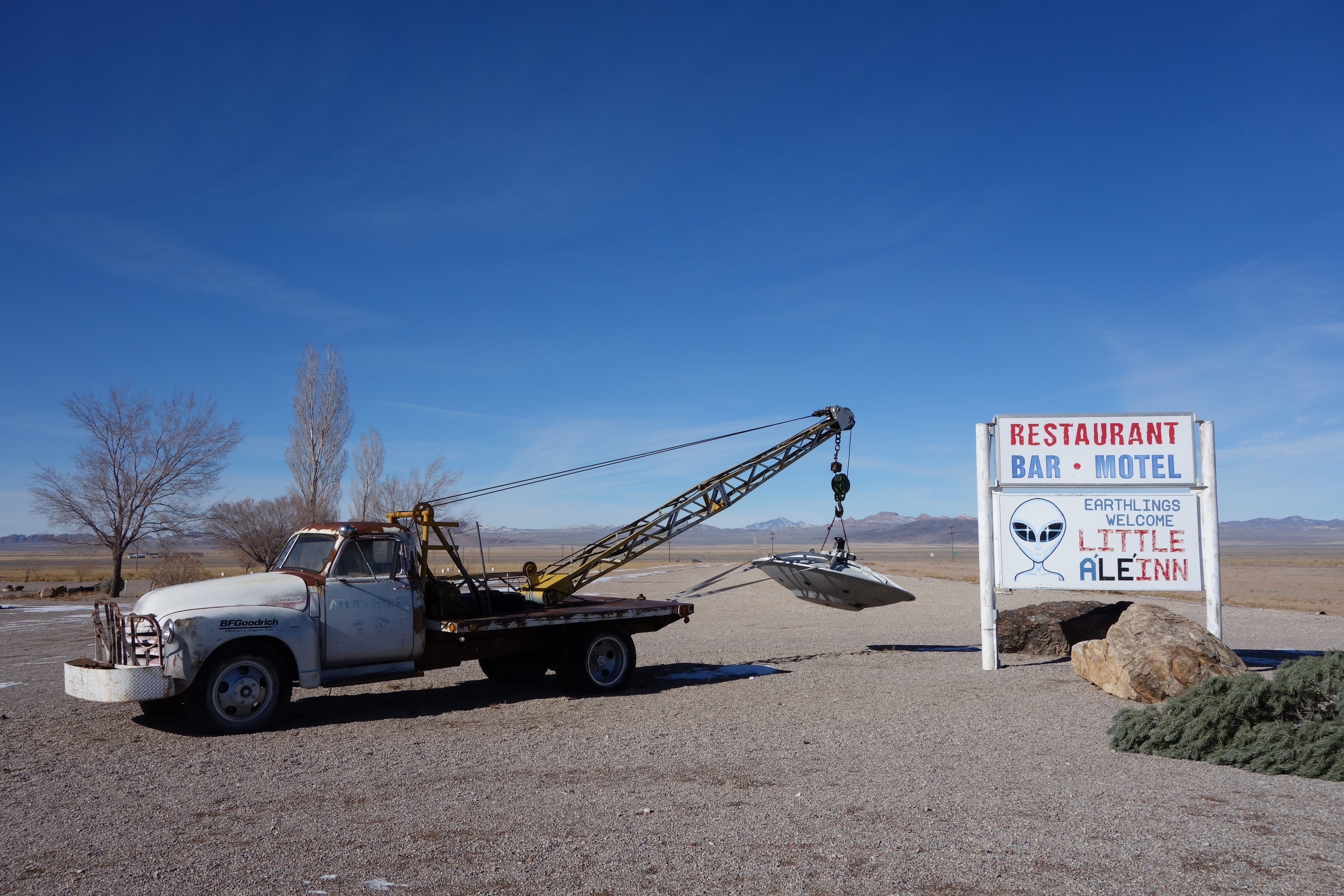 To finish with the Canyon part of the story, during the 2nd day of our stay there, I got a chance to take a look at it from a totally different perspective – a helicopter. Somehow, despite numerous airplanes I spent endless hours in, I have managed to reach the advanced age of 38 without a single helicopter experience. My birthday present to myself was to remedy that. And if I were to climb on board something that looked incredibly small, noisy and unsafe, what could be better than to experience it in style – over one of the most mind-blowing and picturesque places in the world?

It worked. The trick is to get a modern helicopter (then it’s not at all noisy, and does not feel so unsafe), and a pilot who knows what he is doing (turns out that even the most modern and advanced helicopters don’t fly well in rain and darkness). The fantastic impressions made by the Canyon were confirmed, and we continued on our way.

The next item on the agenda was the Silver State of Nevada with the self-proclaimed UFO capital of the world, the desert and Las Vegas (the latter was planned to be ignored altogether). As soon as we got down from the Canyon heights, the climate got immediately warmer, the snow almost completely disappeared, and the scenery became more cheerful. At some point in time, seeing the road sign pointing to Los Angeles, we had to fight the almost uncontrollable urge to make a sharp turn in that particular direction and in some 5-6 hours bask in the warm California sun. But true to our intentions, we decided to stick to the original plan, and moved on into the midst of the Nevada desert, listed on all maps and guidebooks as the Mojave Desert. Quite unexpectedly, this very desert became one of the main highlights of the trip.

Nevada can hardly be considered overpopulated. For the whole duration of our stay in the Silver State (with the exception of a brief drive through Las Vegas), the number of cars and people encountered on the road was minimal (I almost added “the way it should be”, but restrained myself). The desert seemed endless, the road was running to the horizon and beyond, and some seriously tall mountains could be spotted every now and then. Even from afar they looked huge, and judging by the fact that even after driving several hundred miles through the desert we did not seem to get anywhere nearer to them, up close and personal they must be absolutely humongous. But to hell with mountains: the desert – this was the most fascinating thing of all!

Despite the linguistic suggestion of emptiness, the desert was full of stuff – rocks, snow, cacti, cows and lots of other shit. Most of it is free range, meaning that nothing separates the cows and the road from each other. Based on observations, however, the road is mostly used by the cows for toilet needs – they literally get on the road only to shit, and spend the rest of the time peacefully grazing on bleak dry grass and probably cacti (since nothing else could be spotted there) in the desert, in strict observation of the “Don’t shit where you eat” rule.

Besides cows, the desert could also boast tons of rocks of all possible shades and colors – from bright yellow to predominant carmine-red ones. The snow provided a very flattering backdrop to those.

The first item on the agenda was the Extraterrestrial Highway (this, by the way, is the official name of State Road 375) and Rachel.

As has already been mentioned, the total population of Rachel is 90 humans and X aliens, and the town itself, made up of a handful of run-down double-wides, is barely balancing on the verge between a village and a trailer park. Despite all this, the “Little A’Le’Inn” diner, the main bar in town, is open for extraterrestrial encounters daily, and attracts idiots from all over the world. Even though Rachel can definitely be classified as the ultimate shithole (or, at least, one of them – our planet somehow boasts more shitholes than wonders…) the number and variety of customers at Little A’Le’Inn can beat any cultural capital of the world. Having spent an hour at the bar, we met 2 Germans, a Denver family of five of Dutch descent, a couple of Mormon teenagers in suits with badges identifying them as “elders” (don’t know what the deal is there, but thinking back to the hordes of them on the streets of post-Soviet cities, I assume, it’s a common thing with them), several inevitable Asian tourists with big-lens cameras (the fame of the UFO capital reached the Asian continent as well!), and a dozen other individuals of unidentified race, sex and origin.

When planning the trip, I toyed with an idea of an overnight stay at the Little A’Le’Inn at some point, but having read about “outdoor facilities” and the limited number of rooms, the idea was, luckily, short-lived. Having seen Rachel and its sights first-hand, I did not have a shred of doubt that the decision to not stay there longer than was necessary for a coffee and a drink was the right one. This way, we avoided any first-hand experience with the motel part of the business (probably for the best), but had a chance to enjoy the diner/cafe/bar/whatever. The front yard of the diner located in a run-down double-wide, was decorated with an old truck, towing a flying saucer. The sign on the parking lot was asking UFOs and other means of air and ground transportation to self-park and observe house rules. The graffiti on the diner’s side door happily informed the Universe that the facility welcomed all forms of life.

The interior of the 500-something square feet diner was chaos with weak attempts at organization and predominantly alien (of course!) themes. The ceiling above the bar was decorated with one-dollar and other small denomination foreign currency bills with visitors’ autographs (considering the huge amount of those the total worth of “decorations” could easily reach a couple thousand dollars). Rude Republican stickers, plastered all over the bar, were cursing Obama and Clinton, and encouraged the population to stock up on guns (looked like democracy was not overly popular on intergalactic roads). The space between the toilet doors was decorated with three rubber alien dolls, all three with huge sad eyes, and of bright green color. The bar served shitty coffee (America is a great nation, but somehow it completely phased out on coffee – the watery brownish liquid that usually passes for the drink here has nothing whatsoever to do with the real thing), and drinks of varied alcoholic content. They also carried “Alien Wine” – THE most disgusting liquid I had the dubious honor of putting in my mouth, a bottle of which I purchased nonetheless as a souvenir. Can always come in handy for serving to random enemies stumbling onto the premises…

The corner of the diner housed a gift shop, busy selling green alien head coffee mugs, copies of posters prohibiting entry and fly-in into the borders of Area-51, and other artefacts. The place is epic – should definitely be on everybody’s bucket list.

On the way to Rachel, we paid our respects to another landmark widely known in narrow circles – Black Mailbox. To stress the idiocy of the outside world, the mailbox is not at all black, but bright-ass white altogether, wildly decorated with UFO-fans’ autographs, meaningful “X-files” quotes and other inter-galactic memorabilia. The fame part, or why it continues, is not quite clear, for the story of Black Mailbox is quite trivial. The original Black Mailbox was, indeed, black – a standard-issue American mail box, of which there are thousands all over the country. The mailbox belonged (and still does) to the only local farmer Steve Medlin (whole name is still [though barely] visible through all the graffiti).

For Mr. Medlin the main downside of having his farm located near Area-51 was the fact that his mail was regularly stolen by UFO-maniacs. They were 200% sure that the farm was just a cover for various inter-galactic indecencies happening there, and could not wait to be part of those. At some point the farmer got tired of this shit with mail, and his street smarts told him to sell his old (and original) Black Mailbox on eBay to one of the UFO-nutters for nothing less but a thousand American dollars, and weld a thick-leave iron box with a padlock on the pole where the old one used to be.

Mail heists stopped, and the farmer went back to the quiet farmer’s life. Only the UFO-fans, used to camping next to the Mail box, stayed true to form, and continued with the agenda, which with the exception of stealing the mail, went pretty much uninterrupted.

We stopped by the Mail Box early in the morning in the middle of winter, so the place was not too crowded. However, they say that in good weather with clear skies in summer, the nutters are still camping outside, burning fires, trying to spot a random UFO test flight. To each it’s own…

The “Nevada-desert” part of the story is still far from finished, but I will try to stop at the most interesting place, to tease the readers and wet their appetite – the cheap tricks always work…