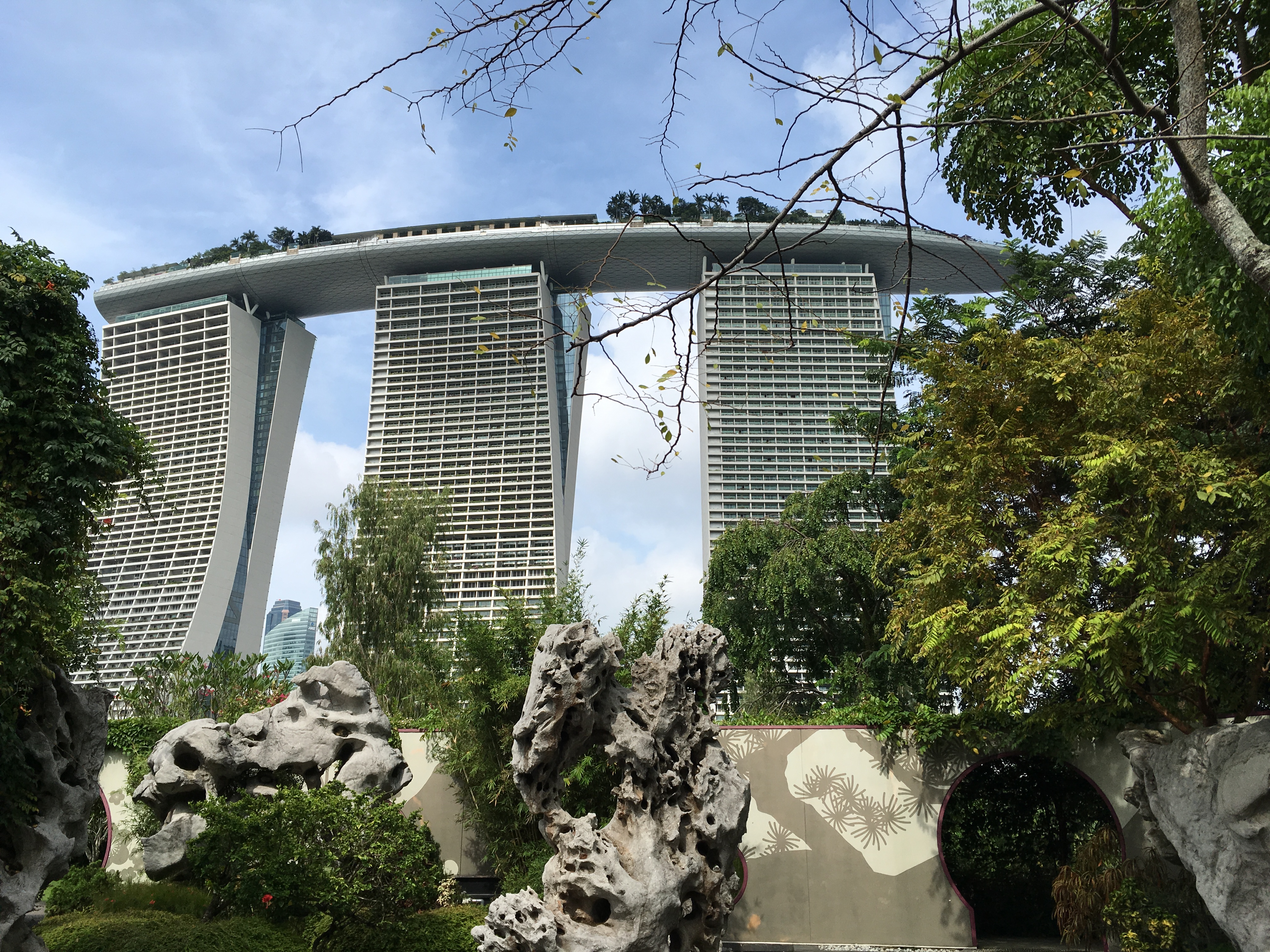 What can I possibly say about Singapore that nobody already knows?… That it’s far, it’s small, and it’s expensive?… Despite the really, REALLY long flight, we only spent 2 days in this city, posing as a country, pretending to be an island. Or is it actually an island, pretending to be a country, posing as a city?… We were confused, as are so many visitors, and I have to admit the actual visit to the place did not really clarify matters much. However, in spite (or maybe because) of the brief nature of the visit, we did manage to add a couple more things to the generic list.

Here I do have a confession to make, though – Singapore has never really been not only on my bucket list, but even on the travel map of places I potentially thought about going to. Ever. The “small, expensive, and far away” triad was never a winning combination for me. Yet, somehow the place started appearing on the horizon – first with Anthony Bourdain’s documentaries, announcing Singapore to be the food mecca of the world, then with the realization of it being the 2nd gateway to Asia after the already familiar Bangkok. This time we had our eyes set on the further parts of South-East Asia, and never ones to pass on a good meal or a convenient flight connection, we thought “Why not?” and opted for Singapore.

We arrived in torrential rain, and a 5-second dash from the taxi to the doors of the far-sightedly booked Clover 5 hotel, left us both soaking wet. The rain was warm, though, which was definitely a new experience, and within the ten minutes it took us to check in and drag ourselves and our suitcases to the room, fog started steaming off us in the air-conditioned hotel environment.

Our room was shiny clean, chilled to perfection and absolutely tiny. This was not a surprise, for by definition the country/city/island should be limited in space, and in any case the room was really well-organized – we even managed to find place to put our suitcases in without blocking the door to the bathroom! Island or no island, the hotel rooms of European capitals still beat Singapore in size. I remember a hotel in Rome I once stayed for work in, where I could easily touch all 4 walls of the room while lying on the bed. The ceiling was luckily out of reach. Compared to that memorable experience, our room in downtown Singapore was gigantic – there was space for a bed, one bedside table, a narrow table under the TV bolted to the wall, 2 suitcases and 2 people. We had to jump over the suitcases to get into bed, but after an eternity spent confined to airplane seats, any exercise was a welcome change.

The need for exercise and fresh air sent us on a late-night walk in the neighborhood. Although, I have to admit that hunger and thirst did not play the last role either. A lot has been said and written about airline food, and while it never really made it to the 1st pages of Zagats or Michelin Guides of this world, a steady and inevitable decline has been one of its primary attributes ever since the birth of commercial aviation. All the more reasons to search for freshly-prepared, non-nuked food on the ground.

Here I have to say that during our 2.5 days in Singapore we definitely found some really good food. We had some non-descript fare as well. Two constants, prevalent in all our meals, though, were that none of them were really bad, and all of them were quite pricey. It’s easy to eat well in Singapore, eating on a budget (or at least not breaking the bank) is an art one has to master. We quickly figured out that food markets, aka hawker centers, were our best option. They are plentiful, open most of the time you might want a bite, competition is fierce (which makes the food fresh and the service fast), and you can try a lot of different local delicacies in one sitting and at a reasonable price.

Satay by the Bay and the Chinatown Food Street are just the two out of a myriad of hawker centers worth the visit. If you visit these two (watch out for opening times, though – despite Google’s claim that Satay by the Bay is open 24 hours, it does not start waking up until 11:00 in the morning), you will see that Singapore brought the concept of a food court (locally known as a hawker center) to a whole new level.

Not surprisingly, it is in Singapore that you can find a hawker stall that not only has its own website, but has been awarded a Michelin Star. Unfortunately, although we did manage to find the Tai Hwa Pork Noodle soup stall the following day, the place turned out to be closed on Mondays (just our luck!…), so the only thing we took home with us was a photo of it.

The Raffles Hotel was deliberately NOT on our list – everybody and their mother goes to Raffles, sits at the bar and orders a Singapore Sling, feeling on top of the sophisticated world. Raffles is the Singapore equivalent of the Hofbrauhaus in Munich – every visitor considers it an authentic local experience, and not a single local would be seen dead within a 100 meter radius of the entrance. Anyways, our aspirations lay with the far less conventional crowd, we were content exploring the back alleys and street food stalls, and who likes Singapore Sling anyway?…

We did not completely opt out of the tourist program, though. While we were happy to skip The Raffles, something else was definitely on our sightseeing agenda. Gardens by the Bay – a futuristic city park, blending the concepts of nature, urbanization, technology and science into something that could easily be found in the latest movie by Steven Spielberg, or Luc Besson. Ironically, the Gardens weren’t modelled off a sci-fi fantasy, but became an inspiration to some: the Guardians of the Galaxy’s Xandar planet was created having the Gardens as its prototype.

The Gardens is an ongoing project by the government of Singapore to transform their already quite green city/island/country from the “Garden City” it is commonly referred to, to a “City in a Garden“. Even though most visitors get familiar with the Bay South, the largest part of the Gardens, the complex comprises two more parts – Bay Central and Bay East, the latter still being mostly a work in progress. All three span 101 hectares (250 acres) and are built on reclaimed land, with the cost of the project of over $1 bln. To the joy of the visitors, the Gardens can be visited free of charge, with the exception of the two conservatories – Cloud Forest and Flower Dome, where you have to pay an entrance fee of 28 Singapore dollars (~19 Euros).

The signature Supertree Grove with its famous hi-tech giant trees is there for each visitor to admire for free. The supertrees, towering over the Gardens in their 16-storey magnificence, are not trees at all. They are vertical gardens, that perform a multitude of functions – from being home to a variety of ferns, vines and orchids, to being the environmental engines for the gardens. They harness solar energy that is further used for lighting of the Gardens, they collect rainwater for irrigation and fountains, and even serve as air intake and exhaust pipes for the conservatories’ cooling systems. AND they look really, really cool! They say the best time to admire the Gardens is after sunset, when the Supertree Grove is all lit up, but even during the day, it looks absolutely amazing. Even if you are not into high-tech environmental stuff, the sheer size and beauty of the place will not leave you indifferent.

There is something in the Gardens for everyone – the geeks will enjoy the technology bits, the nature aficionados will appreciate the beautifully recreated tropical and desert climates inside the domed conservatories, those looking for a quiet retreat from the hustle and bustle of the busy metropolis will appreciate the secluded corners of the park designed for meditation. The Gardens are quite central, easy to reach by the fast, convenient and easy to navigate Singapore MRT (Mass Rapid Transit) from everywhere in the city, and should be on the must-visit list of every tourist that happens to be in the area.

MRT is another must-do Singapore experience. With its impressive coverage of 170.7 kilometers (106.1 mi), it is fully automated with trains operating without the need for drivers. The system is reliable, spotlessly clean, safe and fast, with the network covering the whole city/island/country. MRT is also one of the main reasons for the infamous chewing gum ban in Singapore. Yes, unless you did not know, bringing chewing gum to Singapore, even for personal use is illegal! After several quite costly incidents on the MRT, when the carelessly spat out chewing gum blocked the doors of the automated trains and paralyzed the whole system, the Prime Minister decided on the ban, which prohibits chewing gum to be sold, bought, or brought into Singapore, and introduces a hefty $700 fine for spitting out gum on the streets. Even though the ban was viewed as harsh and controversial when first introduced, and people complained at the beginning, such complaints fell on deaf ears of the government. One of the later Prime Ministers of Singapore is even credited with the “If you can’t think because you can’t chew, try a banana” response to claims that the draconian anti-gum ban stifles creativity in the nation. Judging by the highly-innovative society and hi-tech environment of the island, bananas must have helped, for there were no further claims to revert the ban.

We did go for cocktails in the end. Although not in the Raffles bar, but in Jekyll & Hide, that we found on the pages of our Lonely Planet, and took the time locating in the maze of downtown streets. The cocktails were imaginative, with wacky names like “Vaping Geysha” and “Captain Boomerang”, beautiful and pricey, so we limited ourselves to one each (otherwise we would be required to cut our just beginning holiday short), and retreated to a nearby pub for the comparatively cheap $10 beers. We tried not to think that back in Munich double-sized beers of an astronomically higher quality cost only a third of an asking price on the island, and patted ourselves on the back for good thinking and not planning more than 2 days in Singapore.