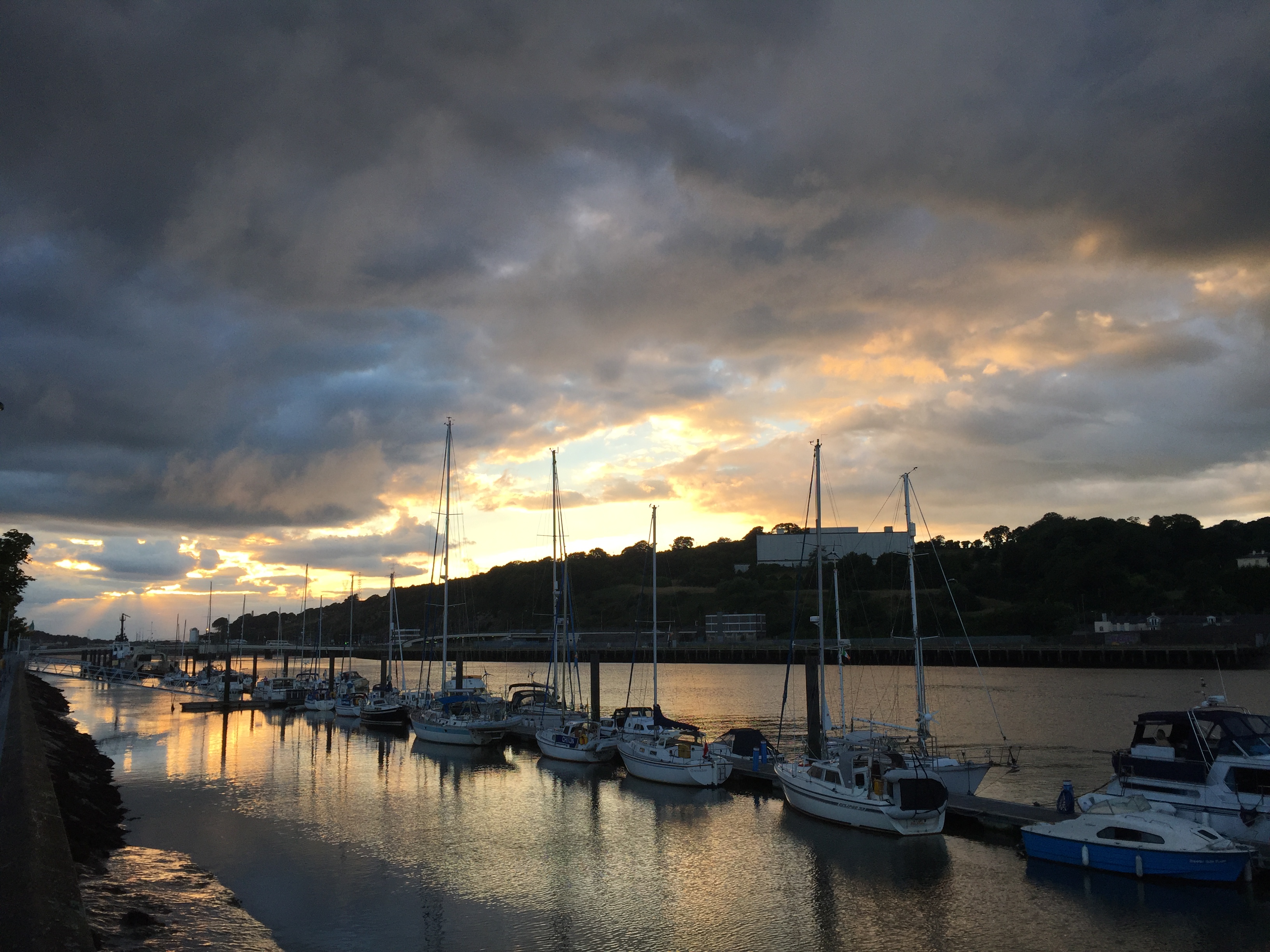 The following morning was painful, indeed. I have long noticed – the more fun you have in the evening, the more you pay for it the morning after. This painfully acquired knowledge had nothing to do with trying to avoid the after-effects, though. Some people will never learn, and we definitely belonged in those ranks…

Squinting at the inconsiderately appearing rays of morning sunlight (where are the dark clouds full of rain when you need them?!), we generally felt like two Draculas caught without cover in the midday spotlight. We crawled out of the hotel trying not to catch the eye of the prim lady owner, and having said good byes to our last night’s drinking companion, who looked annoyingly fresh, decided to give the cliffs another go.

This time, the cliffs presented themselves in the best possible condition – in crisp morning sunlight, with puffy white clouds above them and not a gust of wind in sight, they were gift-wrapped, picture-framed and ready to be admired. If I remember correctly, the part with the O’Brien’s Tower was featured in “The Princess Bride” as “The Cliffs of Insanity“.  Even on the backdrop of blue sky with white innocent clouds and in bright daylight, they looked vaguely menacing, so you could understand the director’s choice of location. We could have done without the hangovers, obviously, but these were self-inflicted wounds, so one can’t be too picky, really. Seeing the cliffs up close and personal (or as close as we could get without falling down and breaking our necks), it was hard to imagine that less than 20 hours ago this grandeur was completely hidden and covered by fog and rain. Eat your heart out, David Copperfield – you got a lot to learn from Irish weather!

At this point I have to make a confession and admit my historic, geographic and linguistic ignorance. Up to the moment when I started writing this bit of our trip notes, I was somehow convinced that Cliffs of Moher and mohair sweaters had common origin. I was already gloating at a catchy name for this chapter, with “Cliffs and Cardigans” and “At the Birthplace of Wooly Sweaters”, being just a few possible options. However, having googled what I believed to be a true fact, I was bitterly disappointed – to my dismay, the mohair sweaters made from the fur of funky-looking Angora goats from Tibet were not only spelled differently, but had absolutely nothing to do with the famous Irish landmark. A shame, really – this would have made for a neat story!…

We walked half the way along the 120-meter tall rim (this time without the rain gear!), took a couple of hundred pictures of the majestic cliffs, trying to avoid having at least a dozen other visitors in the shot, picked up our bikes from the parking lot, and moved on, direction in-land. We had only 2 days left with the bikes (time really does fly when you are having fun!), and were already thinking of getting back to Gorey, even if the route to it was not the most picturesque one.

Cutting across the country made us realize how tiny the island actually was. Riding on the Wild Atlantic Way, and following every nook and cranny of the coastline, it was easy to imagine why the route was considered the longest coastal road in the world – following the intricate maze of country roads and goat paths on any given peninsular could easily take a full day of riding out of your schedule. When crossing the island in an almost straight line, it took little more than 3 hours from coast to coast. Talk about relativity of distances!…

Our run through the country was un-eventful and un-memorable, apart from one short stretch of the road, passing by the Magners cider factory just outside of Clonmel. Now, that’s the neighborhood I would not mind living in! True, it was ugly as sin, but it smelled fantastic! Even me, not being a big fan of ciders, had to admit that the whole area smelled of violets and rose petals. True, the Magners ciders that you normally drink at the pub do not, but I attribute it to the general ambiance of the places they are usually encounter at – with the overpowering smell of Guinness and body odor of the patrons reigning strongly over any flowery petals lingering in the background. Yet, our quick ride past the factory gave us that deceitful feeling and illusion of experiencing the magic of nature for once taking its toll over the human reign…

Waterford greeted us with an unexpected street festival, and most of the roads downtown blocked by police guarding the happily drunk crowds. The ultimate majority of hotels and B&Bs seemed to also be fully stocked for the night with visitors from nearby villages and small towns. We almost forgot we were closing in on the weekend, and our painful hotel deprivation experiences of just a week ago seemed to be being re-lived over again… This time, however, we were in town at a decent hour, when all tourist information offices were still open! Having quickly located one on the waterfront promenade while scouting the area, we parked the bikes in the back street, and after only 5 minutes were the proud owners of a provisional reservations made in our name at a nearby hotel by a lovely lady at the tourist office. We hurried down the road, and confirmed that the room was, indeed, ours!

There is nothing more needed, welcoming and relaxing after a day on the road than a hot shower! Having parked the bikes at the hotel parking lot, and unloaded our gear, we thoroughly enjoyed ours, and went on to explore the town. We missed most of the street festival, though, and by the time we hit the streets, the musicians and street sellers were all packing up, and crowds blocking the streets just a couple hours earlier were slowly dispersing.  Only a group of stray clowns was left marching around town in seemingly random patterns, playing pipes and drums. They seemed to be everywhere – turn around the corner, and suddenly there they were, circling around you in their sunny yellow wigs, and oversized shoes, humming to a tune that only they knew.

Last time the clowns were spotted much later in the evening, leaving a pub. Still with all the gear, including the pipes and the drums, they were moving down the street in a proud and well-thought-out formation. Probably in the direction of another pub.

Despite the fact that we missed the festivities, Waterford presented us with a breathtaking sunset that was hard to forget – dramatic colors of evening sky mixed with the changing shadows of the clouds reflected in the waters of the river. All this was a perfect backdrop to our relaxing evening in town.

However, it was the people of Waterford that left the most lasting impression of the place. Having missed the festivities, we had to feed our social cravings in other ways, and after admiring the sunset landed in The Reg – a bar/nightclub right opposite the hotel, where all our entertainment yearnings were satisfied to the fullest. The club was THE place to be for any aspiring anthropologist.

At 8 in the afternoon, the club was semi-deserted, and the Friday night crowds were just starting to sip through. We ordered 2 drinks at the bar, and took a strategic position at a high table in the corner with an open view of the dance floor. The DJ was just warming up, the dance floor was empty, and we could survey the surroundings with no obstacles of either physical or audio variety. Across the dance floor from us, two skinny bitches dressed up to the nines were nursing un-identifiable alcoholic drinks in martini glasses. They weren’t really drinking them – just stroking the thin stems of their glasses, and hungrily eyeing every male approaching the bar. Throughout the evening they did not have any food, or order any more drinks. They did not get lucky either – either they were two very picky skinny bitches, or they had some other agenda for the evening, that was not visible on the surface.

More people arrived, and the place started packing up with more interesting characters. A heavily pregnant woman with a mother landed at a table next to us with two beers (we could only hope that at least one of them was non-alcoholic), and within minutes we could see her being seriously chatted up by a decent-looking bloke: judging by the rather obvious conversation that was hard to ignore – a complete stranger, who did not seem to be the future happy father. They stayed in the club for a good couple of hours, and with every minute their acquaintance seemed to be progressing in a warmer and closer direction, up to the point that we started worrying that all this excitement could cause the baby to want to come out earlier, if only to slap Mommy on the wrist for being naughty. the woman’s mother did not seem to mind. The skinny bitches were eyeing the trio from across the dance floor with an open mix of amazement and disgust.

Just when we thought that the evening could not get any better, a hen party showed up. The bitches and the pregnant aficionados at the next table were quickly forgotten, and all our attention switched to the new arrivals. In a very business-like manner they camped at a big table on the side of the dance floor, ordered a round of cocktails and two bottles of bubbly, and got ready to show off their dancing moves. Once they all gathered on the dance floor in a circle around their hand bags, you could see that the group was an odd assortment of characters, indeed. There was one really big lady (she turned out to be the only one who could do at least a couple of dance moves), one painfully thin anorexic girl with no sense of rhythm whatsoever, another heavily pregnant one (this must have been the season, or the place!), and the bride-to-be appeared to be wearing a curtain.

Hers was not the award-winning outfit of the night though. A new group stormed the dance floor in just about an hour, and we had to hold our breaths. Hello, 80-es! There were oversized and ill-fitting leather short, paired up with white lace bodies, one-piece pant suits that would flatter nobody, transparent blouses with what seemed to be men’s underpants worn over checkered leggings. Now we’ve seen it all! The club in Waterford appeared to be a time-capsule that catapulted you right back into the days everyone was desperately trying to forget about…

Having had our doze of the 80-es for the night (and probably a couple more years to come), we went to bed.

The following day was short – just a 100 km run from Waterford to Gorey, where we handed our babies back into the loving and capable hands of the Overlanders for taking them back to Munich, a familiar 1.5 hour bus ride to Dublin, and the road trip was officially over. Due to time restraints, we could have done only half of the Wild Atlantic Way, that all the way from Kinsale (where we started) to the most northerly point of Ireland at Malin Head, but we sure received the full range of impressions and memories. Definitely to be repeated one day before we get old and feeble, and next time we might as well do the other part!