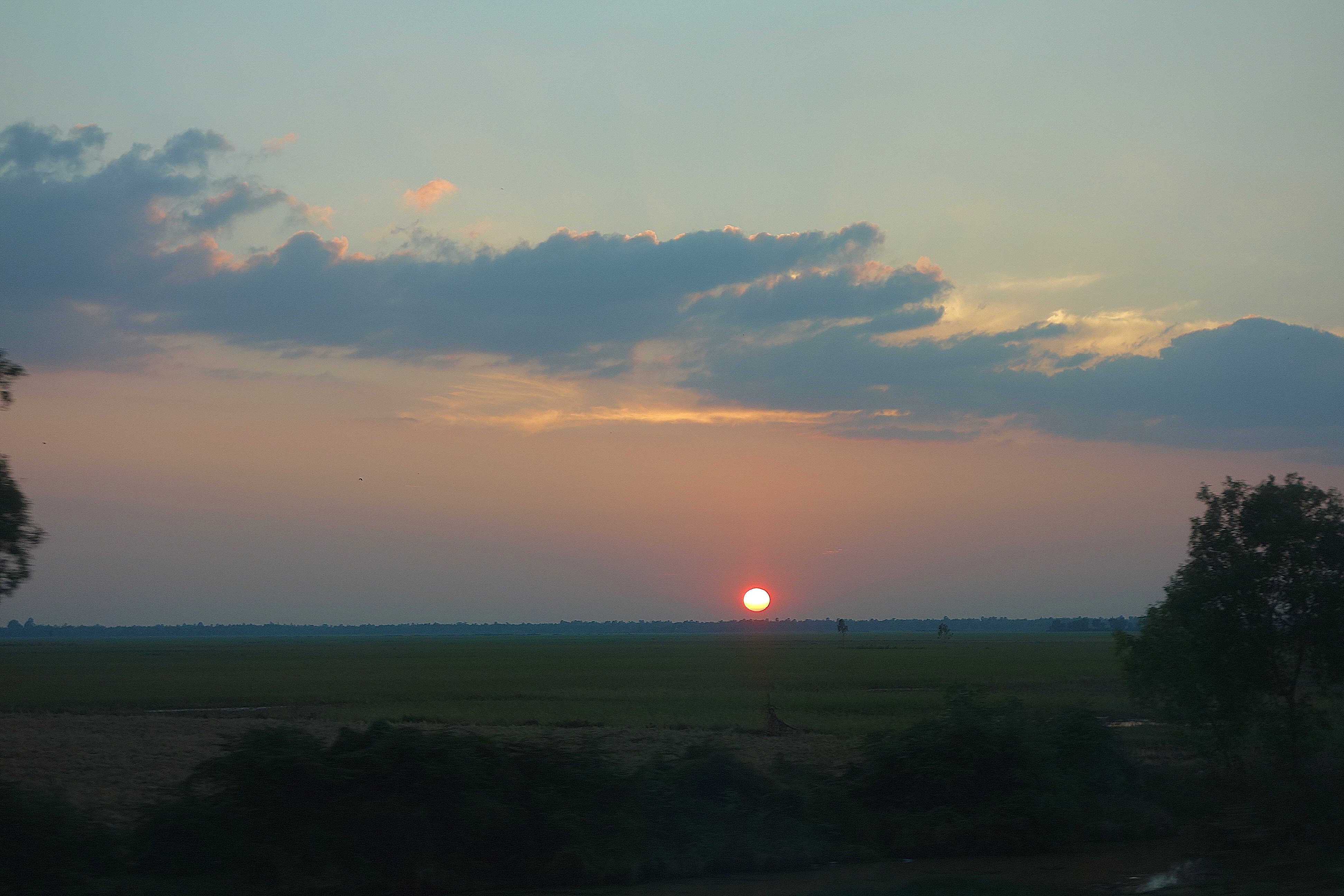 At first glance, not as easy, or quick, as one would expect… However, never ones to shy away from difficulties, we were intent to get to our destination no matter what.

All in its turn, though. Out of purely exotic inclinations, and with the recent 11-hour airplane confinement still fresh in our memories, we decided on the ground means of transportation to Cambodia. Having visited four different travel agents of varying caliber and trustworthiness along Khao San Road, we left enriched with a variety of offers, ranging from 400 to 1,700 local monetary units per capita (excluding the actual visa costs). The agencies agreed only on one aspect – the duration of the journey – assessing it at 7 hours on the road.

In reality, both, the price and the duration, turned out to be pure fiction and bullshit: regardless of how much you pay at the beginning of the trip, by the end of it the price at least triples. We chose the budget option for 400, and in the end parted with 1,700 in local cash anyway. Although, the price for those who coughed up 1,700 at the beginning most probably increased exponentially as well. Time on the road also seemed to stretch proportionally to the price, and compared to the initially announced, almost doubled.

The ground transportation to Cambodia is done by bus. It leaves Bangkok at 7 in the morning, and according to all travel agents arrives in Siem Reap (the “cultural capital” of Cambodia – more on it later) at 4 in the afternoon, which in reality is closer to 8-9 in the evening. A mini-van, booked by several local travel agencies, collects tourists from nearby hotels, packs them inside together with luggage (the total absence of anything even remotely resembling a trunk or a luggage compartment in the van seriously complicates the process), and sets off on dusty Thai roads in the direction of the Cambodian border. Our 10-seater van accommodated a lucky number of 13 motley passengers of varied origins. Since 2 seats were taken solidly by backpacks and suitcases, the driver had to share his seat with two skinny Chinese girls, who seemed to be quite happy hugging the gear shift. The average age of the passengers ranged between 18 and 25, so the two of us represented the mature age group of backpackers. This set us thinking about the years running by, and similar philosophical concepts…

Although, come to think of that, at the time when the rest of the world set off on their adventures, hitchhiking through various exotic destinations, travel wasn’t quite on our agenda due to absence of money, as well as (at least for me) acceptable passports, visas, etc. Which made us start exploring the world and various styles of travel at respectable middle age. Probably for the best. What do I remember, for example, about my first ever trip to the United States on a school exchange program at a tender age of 18? Practically nothing. While now the possibilities, desire, and vocabulary allow to thoroughly document the impressions, in a feat to fight the memory loss and senility that are already on their way.

OK, back to the road. On Thai territory, the terrain was flat as a pancake, and lacked in any sights or impressions. The impressions started upon reaching the coveted Cambodian border. We came prepared and did our homework, finding all visa requirements and formalities for entering the country. Citizens of most countries (to my surprise, holders of Russian passports included) are let in on a point of entry visa obtained on the border. Our motley bus crew included Canadians, Israelis, Germans, English, French, and to add to the truly international flavor – the Russian me. Cambodian visas were stamped in our passports in a wooden shack in the middle of an empty field near the border. A smiley girl, busily frying noodles on a portable gas stove with one hand, simultaneously doubled up as the visa official, and diligently filled in the names and other details in our passports with the other hand. Closer to the border the cost of the Cambodian visa increased from the initially announced 1,000 Thai Baht to 1,200. Tourists who did not happen to have a passport photo with them (of which there was a majority – only the two of us and a serious-looking German teenager, whose home country’s bureaucracy could give any Cambodian border officials ten points forward) were quickly photographed right there in the shack for a handy price of 30 Euros (!). Long live commercial initiative! After that, putting the wallet back in the pocket was not even worth the effort, as the contents were demanded on a permanent basis.

Our motley crew had colorful stickers with numbers put on our clothing, based on which we were further sorted into various buses depending on our final destination. Right before the border, we were uploaded from the bus, and introduced to the Cambodian representative of the tour company. A chain-smoking middle-aged guy with a smile plastered across his face, wearing a wrinkled suit and sandals over mismatched socks, introduced himself as Jim, and led our organized crowd forward in a cloud of cigarette smoke. The “no-man’s land” between Thailand and Cambodia stretches for around half a mile (about a kilometer), and due to the change from a Thai mini-van to the Cambodian one, was walked by us on foot. Having received a “departure” stamp in our passports from Thailand, we move on in an organized formation to “enter” Cambodia. With our suitcases and backpacks we veered among carts filled with vegetables and live chickens, trying to avoid mopeds carrying families of five all talking simultaneously on their cell phones, and other local exotics. The new country was getting more visible by the minute: the colors were getting greyer, the roads dustier, and the people more serious.

The Cambodian border was not exactly closed, but was not within easy reach either. A couple hundred people queue was snaking in front of it, filling up all available space. Seeing our sour faces, our guide immediately announced that for a handy price of 200 Thai Baht a head to be paid to the immigrations officer, the latter would escort us through the VIP corridor, and personally stamp our passports in the best possible way without the need of our physical presence. This immediately struck nostalgic notes in my memory, reminding me of the wild 80-s and 90-s in my home country… Our further stay in Cambodia continuously supported this de ja vue…

Having distributed to us our passports (appropriately stamped, as promised) on a bus stop on the Cambodian side of the border, our guide put us in a regular city bus. After a 15-minute ride the bus unloaded us at an inter-city bus depot, the total chaos of which painfully reminded me my childhood summer trips to the Black Sea, and bus stations and markets of Yevpatoria on the Crimean peninsula. There we were once again offered to part with some cash in exchange to a possibility of upgrading our further travels from a “regular” bus to a mini-van, and even to a VIP taxi. We proudly refused, and were very efficiently sorted by our colorful stickers into buses, on which we continued our journey.

During the following 6 (!!!) hours, we forcefully enjoyed first the DVD with The Best Of Cambodian pop hits, and then a Kung-Fu film in Chinese with Cambodian subtitles, that was first shown from the middle till the end, and then from the beginning to the middle. We picked up the bus driver’s grandma with a basket full of laundry in one roadside village, and dropped her off in the next one. There we picked a couple other relatives with several boxes of canned food and gave them a lift to their destination. We also stopped in the middle of the fields at a cafe that obviously belonged to yet another relative of our bus driver, and waited there for an hour, while the driver was enjoying a late afternoon meal. As a result, we reached our destination only by 8 in the evening, tired, but happy that the journey was finally over.

What is Cambodia, and what happened next, is the topic for the next piece.