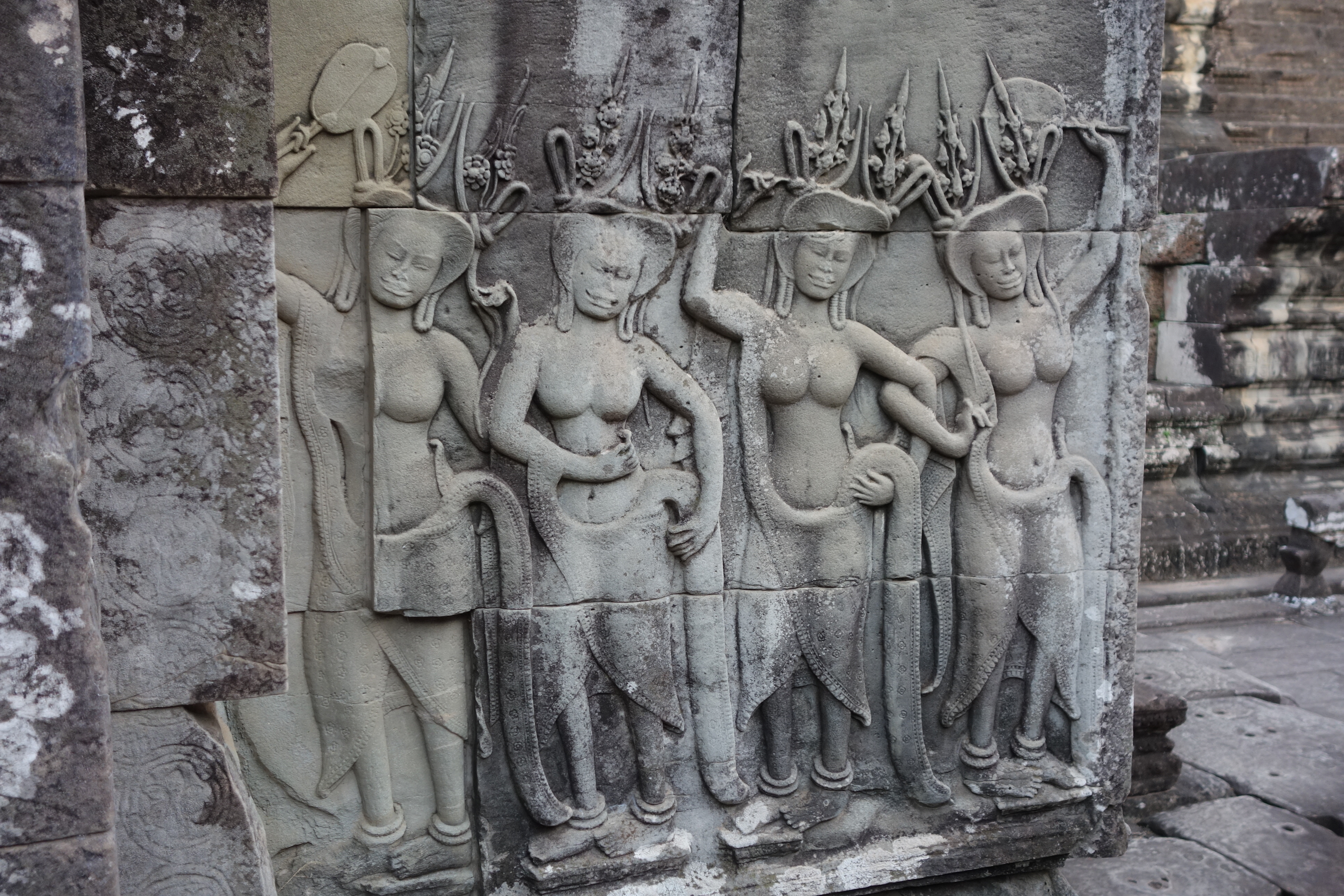 OK, Cambodia. Based on my first, very superficial, but fresh impressions, Cambodia is Russia 20 years ago. Throughout the country you see deterioration and decay, shortages of electricity, dusty roads in dire need of repair, carts and buggies filled with chickens, geese and God knows what, gloomy-looking people with grey faces and run-down shacks on the sides of the road. In big cities (of which there are two – the official capital of Phnom Penh, and the “cultural” one of Siem Reap) the situation is reversed: neon lights all over, fancy restaurants and clubs, shops and stores full of brick-a-brack, swarms of street sellers pushing varied chachka to everybody around, and prices in US dollars.

Every minute with enviable consistency you are being offered a tuk-tuk, a massage, and miscellaneous souvenirs. To the credit of Cambodian street sellers, they are mostly friendly, and refusals are not taken personally by anybody. In stark contrast to Russia of the late 90-es, tourist chachka is pushed not by teenagers, offering everybody “amihuts” (or “army hats”, linguistically disguised by entrepreneurial kids who skipped too many English classes at school to pursue their commercial endeavours), but by quiet old ladies. Their merchandise included T-shirts, wooden frogs, and also hats, although of traditional and not military variety. All grandmas were polite and smiley, each wearing about a dozen hats of varied colours and sizes that were being primarily offered for trying out to tourists, sitting in street cafes and restaurants.

Siem Reap could boast bars, restaurants, and clubs of all sorts, colors and designs, all with exceptionally low prices by tourists standards (under $10 for a meal in a classy restaurant) and absolute unaffordability for the locals. Thinking back to the Perestroika years in Russia, where the situation was pretty much the same, I was wondering how life had a funny way of repeating itself and bringing stuff back at you. The one thing I would never have imagined back in the 90-es, though, was to find myself on the other side of the table….

The French heritage is also very visible in Cambodia. For a long time the country used to be a French colony, which left a lasting mark in the form of two ingredients, absolutely foreign to most other cultures on the continent: bread and wine. In Thailand and (according to witnesses) other Asian countries, bread in the form familiar to us simply does not exist, and although wine can be found, one cannot even look at it without tears. In Cambodia, a family of five on a scooter (all five on one) carrying several bags of baguettes is a normal everyday sight. Every restaurant and street eatery will have French, or at least South-African/Australian wine on the menu, predominantly of decent quality. Which is quite surprising, considering that the French were thrown out in the middle of the 20th century, after which Cambodia suffered through dictatorship, Paul Pott’s “Khmer Rouge” genocide, war, desolation and starvation (all this in less than 50 years!). Mysteriously, the wine and baguette survived…

Upon arrival, we realized that Cambodia also turned out to be a kingdom. This was proudly announced on the gate over the border. Throughout our brief stay we did not come across any other signs of the King (or Queen?..) As opposed to Thailand, where the portraits of the monarch (a pleasant looking skinny man in old-fashioned glasses with thick lenses and an intelligent face of a stereotypical engineer), decorated with colorful ribbons and flowers, can be spotted on every corner and could compete only with the statues of Buddha, which were also aplenty. In Cambodia, the only frequently- and publicly-seen (also on very corner) image was that of Buddha, while the monarchical head of state wished to remain unknown to the masses.

The “Viva Hotel” above the Mexican restaurant we booked for two nights on the Internet proved to be a complete flop: the constantly leaking toilet with no drainage and a rave disco right next door were two things that the website shyly forgot to mention. After a quick scout of the area, we quickly jumped boat, and moved to a fantastic newly-renovated “Neth Socheata” hotel within a 5-min walk for half the price we were paying at the Mexican joint. The super friendly guys on Reception provided us with a tuk-tuk and a driver even before we moved in. The driver was a friendly chap with a wide smile that has never seen the dentist’s eyes, and a Coca-Cola addiction, which we supported at every stop during our trip over the temples. He also spoke exceptionally good English, which he said he learned from the Buddhist monks.

The “cultural” capital of Cambodia is situated in the vicinity of the most famous monument of the Khmer Empire, and the most frequented attraction of the country – Angkor Wat. Built in 12th century AD, the size of a city, Angkor Wat is a complex of temples that also happens to be the biggest religious site in the world. Angkor Wat was the main reason for our trip to Cambodia, and upon closer inspection completely justified the 12-hour bus ride. Just as a side note: the trip to Bangkok took only 30 minutes by plane…

One more trivia fact – the name “Siem Reap” is translated as “Defeated Siam” (i.e. Thailand), which for a city, situated in the immediate geographic vicinity of the Thai border, is rather ballsy. Would be equivalent to re-naming the city of Kaliningrad on the Russian/German border to “Death to Nazis“…

Now, about Angkor Wat. It is a city, made up of both, half-ruined and quite well-preserved temples that were initially built as an Hindu sanctuary, but got quickly re-built and re-converted into Buddhism. The actual name of “Angkor Wat” means “the city of temples“. The size, footage, planning and architectural design of the place are mind-boggingly impressive. How, and by what means this grandeur came to be in the times, when the only tool for creating architectural masterpieces was plain physical labor, is impossible to imagine! All those roads, stretching into the horizon, flawlessly planned walls and tall temple towers, decorated with delicate stone carvings, part of which survived till this day, looked like they would be an impossible feat to create even today. Carved flowers, plants, dancing women in traditional costumes and jewelry were covering every square inch of the surface. According to some historical experts’ calculations, all this should have taken at least 300 years to built. Somehow, the architects and builders of Angkor Wat managed this in just 40…

Practically from the first minute on the premises, Angkor Wat resembled something very familiar. After painful attempts to figure out what exactly, I got it – the abandoned underground dwarf Kingdom of Moria, from the “Lord of the Rings” trilogy by J. R. R. Tolkien! The way I imagined Moria when reading the books (and long before the famous films came to be), looked exactly like Angkor Wat. A weird unity of art and reality…

Visitors to the site can get in on a ticket valid for either 1 day or 3. A 1-day ticket also covers the evening of the previous day, as one of the most popular tourist pastimes is watching the sunset over the temples. It’s interesting to note, that only the ticket office has opening hours, Angkor Wat itself is open day and night. The guards with flashlights check your ticket at the entry point, after which, it’s every man for themselves. This is quite amazing, as even in bright daylight the chances of breaking your neck, legs, or other important bodily parts climbing the rather rudimentary fenced ruins, are exceptionally high. At night, in pitch darkness all the above is practically guaranteed. Surprisingly, the amount of people on crutches in the area did not exceed the average statistical numbers…

Having admired the breath-taking sunset, we also decided to join the idiots, desiring to observe the sunrise over the sacred place. Judging by the sheer numbers of people, gathered in front of the main temple at 5 (!!!) in the morning, following the publication of “A Thousand Places To See Before You Die“, this pastime firmly took one of the leading places on the bucket lists of people of all nations and walks of life. The morning sky was overcast, and with the clouds, thickly covering the horizon, the sunrise did not impress. The huge people crowds, gathered on premises for the photo opportunity, however, did leave a disturbing sediment in our memories…

After our unlucky sunrise experience, we attempted a search and scout mission around the area. With the help of our Coca-Cola loving driver, we visited about a dozen temples and ruins in the area, and by the end of this 6-hour long tour, were all templed out. Surprisingly, away from the main temple, the tourist crowds thinned out. Probably because the territory was so huge, they spread out evenly, without forming humongous crowds. All temples we have seen were different, in varied levels of preservation, decay, and unity with the surrounding jungle. The ultimate majority of them had free access, and could be climbed from top to bottom, and only the rare few could be observed only from the distance. I am sure that in the nearest 5-10 years the part with allowing wild hordes of tourists leave their footprints and litter in the centuries-old architectural masterpieces, will come to an end, and the latter will only be allowed to be visited in organised groups, without venturing further than a mile inside the perimeter. Like with the pyramids in Giza in Egypt, which now can only be admired by tourists from the outside. This would undoubtedly be the right thing to do – swarms of tourists on a photo hunt can trample any place and demolish any architectural site, no matter how big or beautiful.

All this considered, there was still something primeval and thrilling about the possibility of walking in pitch darkness (the torch, brought along from Munich specifically for this purpose, was still lying in the bottom of the suitcase in our hotel room) over the bridge built 8 centuries ago, and climbing the gigantic stone steps to the top of the ancient temple, without breaking a neck, a leg, or falling into one of the many clefts and hidden narrow passages below.

Of all the temples on offer, the one, Ta Prohm, partially consumed by the surrounding jungle, left a particularly strong impression. Giant trees grew through the walls, and toppled the buildings, holding the stones with their roots as possessive lovers, and hiding the remains of the ancient buildings from prying eyes with their thick foliage. The place looked like a fantastic, bizarre and almost unrealistic scene from an ancient fairy-tale about the love affair between nature and man’s creations. The trees, sitting proudly on top of walls and buildings, half-crashed by their deadly grip, brought back another memory of the “Lord Of The Rings” – they were those same Ents that Tolkien wrote about!

The question, facing Angkor Wat now, is how to preserve the delicate balance, and not allow the nature to reclaim its space and destroy the architectural masterpiece, while at the same time not to break the temple walls in an attempt to clear them from the death grip of the trees.