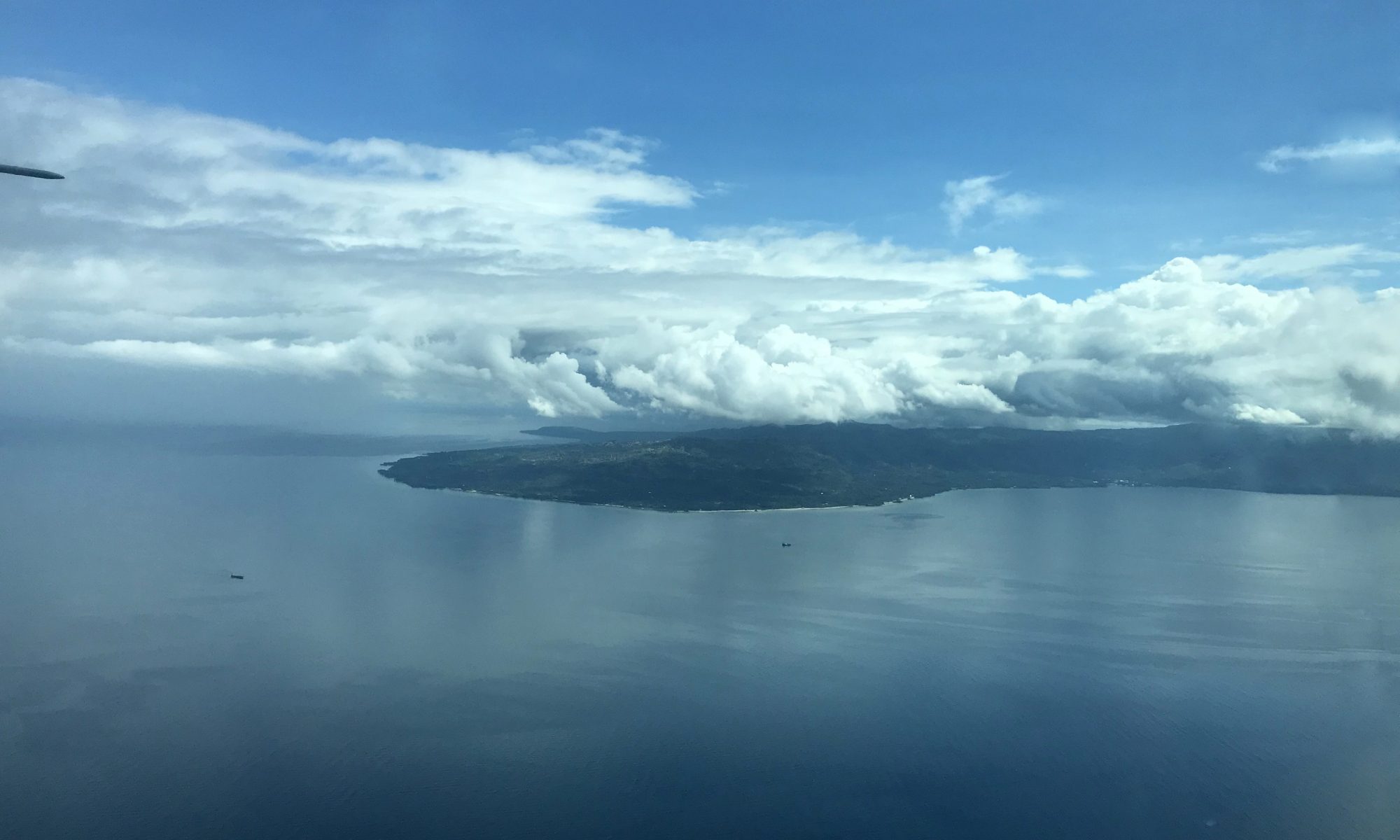 Very chuffed with our organizational abilities, we arrived in Cebu with a quick AirAsia flight from Caticlan, only to find out that the hotel booking I made the night before was for a wrong date.  Exactly 2 months from now.  Fuck!…  Seriously?… Not again!  Unfortunately, I have to admit, that we’ve done similar dumb shit before:

And now we had a wrong hotel booking!…  Just like with Bali, I can’t even claim that I realized it myself – having smugly arrived at reception and dropped our bags in relief, we were met with puzzled glances from the hotel staff, who politely informed us we were a couple months early.  There were no other venues in the vicinity, we had a very vague idea of the topography of the area, and were too tired to run around looking for other means of accommodation.  The only reason we chose the hotel was its relative proximity to the airport, as Cebu was just a pit stop on the way.

Luckily for us, the forces looking after drunks, idiots and small children did not abandon us, and upon further inquiries the hotel managed to find a room for us for the night.  They could not change the booking we already made, so, unfortunately, we paid for our digs twice.  Gotta pay for experience…  To add some warmth to the cold comfort of gaining additional experience, the hotel was very nice, and even had a pool, which we immediately used to cool down our overstretched nerves.

The rest of our trip to Siquijor went smoothly.  Maybe you need to seriously fuck up once at the beginning in order to sail on smooth waters afterwards?…  Don’t know if there is some universal law about this, but it sure worked for us and the rest of the plan of getting to Siquijor worked out flawlessly.

In the Philippines Siquijor is widely believed to be the island of magic, witches and sorcerers.  This makes the local Philippine tourists stay away, and attracts only the craziest of the foreign travelers.  The absence of direct connections to/from major cities also helps with keeping Siquijor off the map of mainstream tourists.  At least for now.

To get there from Cebu, you can take a 2-hour ferry to Tagbilaran on the island of Bohol, stay the night there (as the next ferry conveniently leaves earlier than the one from Cebu arrives), and then travel for 5 more hours on a ferry to Siquijor with a stop-over in Dumaguete on Negros Island (this time at least without the need for an overnight stay).  All in all, the trip will take 2 full days, and you will be at the mercy of unpredictable ferry schedules, weather and waters of the Bohol Sea.

We weren’t too keen on this scenario, and having researched and googled further, found an alternative – a direct flight from Cebu airport to a landing strip in Siquijor with a tiny propeller plane, operated by Air Juan – a local Philippine airline we never heard of before.  Adventure – here we come!  The flights were easily bookable online, the directions on where to find the airline counter at the airport were pretty clear, and a one-way trip for both of us cost as much as the two ferries and overnight stay in Tagbilaran would have.  And – it will only take half an hour instead of two days!

A bit shaken by the whole “wrong date on the hotel booking” experience, we double-, triple-, and quadruple-checked our online flight tickets, made 200% sure Air Juan was flying from Mactan Cebu International airport, and arrived at said airport 3 hours before the flight, to make sure we had enough time for a potential next fuck-up.  The Air Juan counter was located quickly, and our flight was even on the departures board!  The check-in counter was empty though, but several representative of other airlines assured us that it would open 1.5 hours before the flight.  We parked our asses in a coffee shop strategically positioned right opposite the desired counter, and in 1.5 hours on the dot, the staff of Air Juan showed up and without further delay checked us and our bags in.

We were given our boarding passes, and found our gate in a far corner of the domestic departures, from which we had to walk with our luggage to the plane.  The plane was a cute 8-seater thing the size of a mini-bus, dwarfed by the surrounding huge machines of the airport.  The only thing tinier and cuter than the plane was the pilot – a beautiful miniature young lady, who had no problems bossing around the male airline representatives and her co-pilot.  I was in love!…  It’s quite rare to see women pilots in commercial aviation, which even nowadays continues to be a predominantly male business.  The global number of women airline pilots is only 3%, and our plane to Siquijor was going to be piloted by one of them!

Our bags were brought on board, and piled up in the back of the plane, and having taken our seats, we realized that Row #2, proudly listed on our boarding passes was actually the first row for passengers.  The only two seats right in front of us were those of the pilots.  Now, I’ve taken small planes before – from 1-hour flight in a propeller plane between Bulgaria and Romania in Europe, to numerous local flights between small islands in Indonesia.  However, all those “small” planes still had capacity of at least a couple dozen passengers, and there was always the door between the pilot cabin and the rest of the plane.  This was officially the first time when I could sit within a hand’s reach of the pilots, and watch them fly the plane – I could barely contain my excitement!

After the plane took off, I believe I must have giggled and smiled like an idiot child throughout our 1-hour flight over the bluest waters I’ve ever seen.  The plane was flying relatively low, so you could see the boats and ripples of the waves in the Cebu Straight.  All shades of blues and turquoise colors were shining in the bright midday sun, and the islands in the straight were picturesquely adorned by the yellows of the beach sands, and the white puffs of clouds sitting on top of them.

We chose the flight due to its shortness, but once in the air, we were sorry it did not last longer – the views were simply too beautiful and too amazing not to try to admire them for longer!… Alas, after exactly 60 minutes of gushing over the scenery, we were coming to a landing on Siquijor.

If the plane that brought us here was the smallest I’ve been on, the landing strip at Siquijor and the airport that greeted us there (if it can be called as such), were definitely the tiniest facilities of this kind ever!  The little shack with a faded-out sign “Siquijor Airport” has definitely seen better days, and upon closer inspection (when we made a mistake of trying to walk through it) turned out completely un-inhabited and dug out inside. No wonder it did not even had an IATA code!…

What happened next on our trip, and how the Witch Island greeted and treated us, will have to wait till the next part of the story.