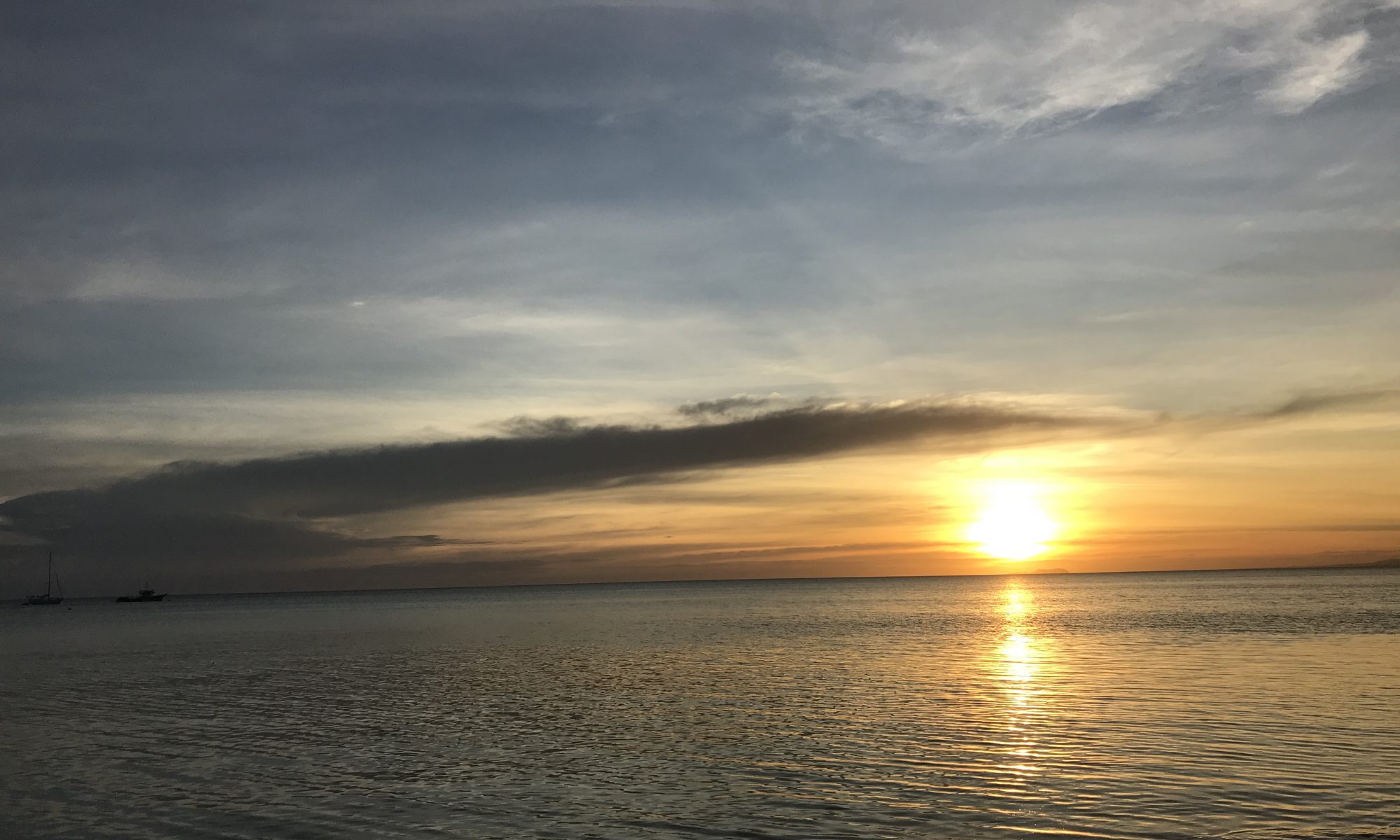 Not being particularly into black magic, shamans, or witches of any sort, we had a different and a rather prosaic reason for our trip to Siqujor – we were going to visit a friend.

Chris disappeared from Munich a couple of years ago.  He signed up for a well-paid job in Bangkok, completed the project ahead of time, and then went down the slightly less-traveled roads.  He met a girl, told his employer who wanted him back in Munich to fuck off, and moved in the direction of the Philippines, his new partner’s home country.  Part of his adventures can be traced here (in German), but after several irregular website updates Chris went off-line.

From his blog, we knew that he had a traditional Basnigan fishing boat built in Cebu and traveled from there through the unsteady waters of the Cebu Straight to and around the Virgin (Pungtud) Island off the Bohol coast, and after several weeks at sea arrived in Siquijor.  This was where any further traces of Chris’ trail ended.  There were no replies from any of a dozen E-mail addresses we had for him, all messages on Facebook were left un-answered, and his phone was apparently disconnected.  Chris has always been a crazy fucker, and has been known to disappear for weeks and even months even when he lived next door in Munich.  However, a year completely off the grid was way too long, even for Chris.

We all silently envied him, of course – giving the finger to the corporate world and setting off into the sunset to live the dream!…  Deep in our hearts we all wanted to follow suit, and were quite curious to see how it all worked out for him.  Many were pissed off at him for cutting off all the ties of friendship, and not bothering to give any sign of life to our increasingly desperate attempts to get in touch.

We were also worried, of course – mad as Chris was, he was a foreigner living in a country the language and laws of which he did not understand.  The islands to the South of Siquijor had a serious ISIS problem, the seas in that part of the world were swarming with pirates, and while Basnigan was probably not the most attractive vessel for them, we did not want the next piece of communication to be a ransom demand, or a beheading video…

Richie, Chris’ best mate was the first to take action.  He booked the flight to Cebu, and with 2 weeks of vacations on his hands, was intent to find the fucker (hopefully alive, and not sold into white slavery or chained to a bed somewhere in a drug den), and give him a good bollocking after hugging the shit out of him.  After leaving Munich, he checked in every other day, as promised, and upon reaching the Witch Island, did find the prodigal son of the Austrian Alps, happily sipping beer next to a relaxed-looking construction site on the beach, soon to be a backpacker hostel.  The “proof of life” photos were duly sent out to all concerned friends and family, and we all breathed a sigh of relief.  Crazy or not, Chris had a heart of gold, and we all loved him dearly, so it was a happy day, when the intermittent communication was re-established.

This was half a year ago.  Despite all promises, Chris continued keeping incommunicado after that first visit, but we hoped that he was still alive, and the hostel must be finished by now.  Much as we loved Chris, we weren’t in the mood of spending our vacations making bricks for building his hostel.  Yes, you read it right – making bricks.  Of clay and sand.  With one’s own bare hands…  Apparently, there was nowhere on the island one could buy bricks (or any other construction materials, for that matter), and said materials had to be ordered and shipped from either Bohol or Negros, at an extortionist (by local standards) price.  Chris has never minded roughing it up, and having moved to the Philippines, lived like a Philippine – simple and tight, not like a foreigner protected by the power of bank savings and credit cards.  So, according to the reports from his mate’s first visit to the island, Chris took the time to make each and every brick for his hostel with his own hands.  The process was long and tedious, and was complicated by the fact that the sun was shining every day, the sea was turquoise blue, the beer cheap and ice cold, and being his own boss now, Chris did not need to watch the clock.

We figured half a year should still be enough to finish a 1-storey shack even at the snail island pace.  In case the construction works were still ongoing, we had a back-up plan of staying somewhere else.

Naturally, we did not breathe a word to Chris about our intent to visit.  Still pissed off at his silence, seeming abandonment of all friends, and his cutting off all ties to Europe, we were fully intent on giving him a heart attack by showing up un-announced right before the New Year.  Richie was going to be on Siquijor at around the same time as well, and was the only one privy to our plans.  He knew the date of our arrival, and promised to pick us up at the airport, but we did not hold our breaths over that.

Back to the original story.  We landed at Siquijor Airport (too grand a name for a little hut with dug-out insides, but still…), hauled our bags from the plane, and having surveyed the surroundings spotted exactly one tricycle driver loitering about.  Needless to say, Richie was nowhere to be seen.  We sprinted towards the only available tricycle, beating the remaining 4 fellow passengers to it, and secured a ride to Chris’ place.  The tricycle driver claimed to know where it was.  We had no idea.

After a quick 15-min tricycle ride we were there.  Sunny Side Bed & Bar with its proud owner lounging in the front with a bottle of chilled San Miquel in his hand.  He looked skinnier and scruffier as we remembered him, but it was him all right!… We asked the driver to slow down and drove past, waving hands and shouting friendly obscenities at Chris.  The look on his face was to die for!  He jumped up from his lounge chair, knocking off the table and his bottle of beer, and just stood there with his mouth open and the look of total disbelief on his face.  Exactly the reaction we wanted!!!  Well, it’s his own fucking fault that he was not reachable by any normal means of communication, and his island was way too fucking far for the pigeon post to reach!…

From then on – it was party time!  After the obligatory hugs, kisses and swears all around, Richie joined in (he was fashionably late for picking us up at the airport), our bags were thrown into the hostel’s only VIP room with en-suite shower (more on that later), cold beers were distributed, and we sat on the deck admiring the views.

Sunny Side, proudly carrying a rainbow flag, was the island’s first LGBT-friendly hostel.  It was strategically positioned on the West part of the Siquijor Circumferential Road encircling the island along the perimeter.  The building was finished, and with its bamboo front, arched windows, big roof-top deck and beautiful palm-trees growing from under the walls, looked every bit a pirate’s recluse from the “Treasure Island” one would imagine.

Chris and his partner Lyka, were the proud owners, and permanent fixtures on premises.  The help staff consisted mostly of bayots (or bakla) – born as men, but identifying with female gender, they dressed and acted like women, and in the Philippines were generally accepted as an official 3rd gender.  They were young, pretty, friendly, and spoke zero to shit-level English, which did not stop them from chatting with everybody within earshot in every language they could muster.

Having quenched our initial thirst with ice cold San Miguel, we realized that solids would be a good idea, especially if we continued partying (which we fully intended to do).  Sunny Side seemed to function on beer alone.  Which presented a slight problem, considering that the last food we had was yesterday.  This time, Richie had a chance to showcase his hospitality talents, as he had everything organized and waiting for us.  He did his home-work during his first visit, and realized that in our advanced age, it made total sense to party in Sunny Side, but sleep somewhere quieter.  The digs he rented through AirBnb were off the beaten track of the Siquijor Circumferential Road, and up on the hill, about 20-min drive away from Chris’ hostel.  He had a lovely room in a spacious house with communal terrace, a large swimming pool in the garden, and a giant penis shower next to it (don’t ask!…)

The owner, Anne, was amazingly welcoming, bubbly, pretty and spoke excellent English.  The house, pool, and penis were all built by her late husband of Finnish origin, and after his untimely death she was trying to make ends meet and improve her social life by renting out part of the house to the tourists.  She and her best friend Cheryl had a fantastic meal waiting for us in the house – meat, vegetables, fruit and chilled wine along with their wonderful company were our 2nd hearty welcome to Siquijor.  Both, Anne and Cheryl were so lovely, so friendly and so cool, that most of our time on the Witch Island was spent between them and Chris, and we continued being friends long after we left.

Anne’s house could boast not only amazing food and pool (well, a huge penis was a nice touch as well…), but also fantastic sunsets.  We admired the bright colors from the top of the hill, before taking a trip back to Chris on 3 unsteady scooters.  We could have probably camped at Anne’s for the duration of our stay on the island (the house sure looked WAY more comfortable than Chris’ hostel…). However, Siquijor’s roads away from the main drag weren’t overly inviting to transport, and doing an obstacle course pissed out of our minds on a scooter in the middle of the night was not in our plans.  We had serious party plans, and decided it was safer to avoid dark potholes in an unknown terrain.

When we got back, Sunny Side’s party was just starting to kick in.  Turned out, it was a nightly event, and all local expats and misfits were drawn to it like moths to the proverbial flame.  Chris’ music was the best on the island (it’s amazing what a good playlist and an iPhone connected to speakers can do!), everybody was happy, chilled and well-lubricated.  Time flew fast – there was drinking, dancing, weak attempts at pyrotechnic exercises in preparation to New Year’s night, more people came, and the rest of the evening was rather hazy in our memories.  At some point during the night we went to a local Italian for food (how we got there – we have no recollection whatsoever), I tripped on a stool and fell, decorating my knee with a huge bruise (which was only discovered the next morning).  On the way back we stopped at a local disco with extremely loud music and what looked like hundreds of people dancing to the beat, and at some point must have returned back to Sunny Side (again, probably using a magic unidentified teleport) and fell into our bed under the slowly circling ceiling fan.

All that was just the beginning – we had 3 more days on Siquijor.

One Reply to “Part 4: Long-Lost Friends and Giant Penises”