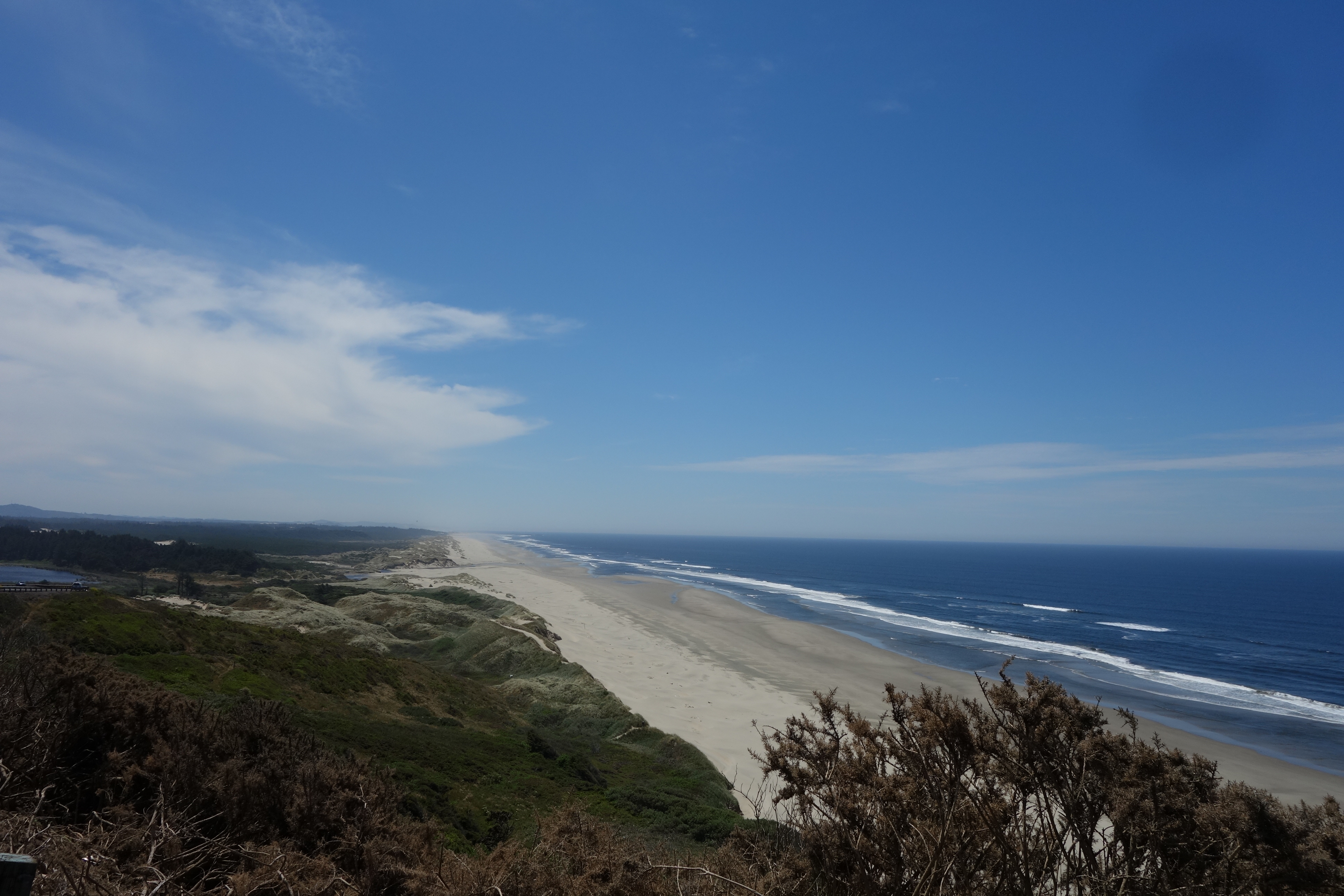 Since our greedy souls demanded stops in San Francisco, LA and Vegas for at least a couple of days each, we had to push it to do 7 to 8 hours on the bikes every day, to accommodate the luxury of these interim breaks.

The next morning, we woke up at 5:30, and by half past six were ready to go. It was cold as fuck, but the rising sun looked promising. Eager to get on the road, we managed to leave several (much needed) items of clothing at Silver Sands, and what’s even worse, realized this only a couple of days later, already in San Francisco. Luckily, the motel did not donate them to Salvation Army just yet, and the nice lady we met at Reception replied to our desperate Email, agreeing to ship said items to Cindy’s Seattle address. Amen, we definitely did not sign up for hard thinking during our vacation…

The morning was full of good intentions, but we had to make a pit stop within the first half an hour of our start – it was simply too cold to ride. The freezing chill was rising from the ocean, sneaking through three layers of clothes (personally, I had four!) and wrapping our bodies in a vault-like cocoon. Besides, we were hungry. Having gotten breakfast tips from a cheerful guy at a gas station, who looked way too energetic for this early hour, we navigated to a little shack further down the road. Three equally awake and immaculately-looking elderly ladies running the place fed us gigantic (this is America, baby – the land of plenty!) portions of mouth-watering hash browns and eggs Benedict. The amount of food was enough to feed the family of five, but it was simply too good to leave. Hats off to Parkside Coffee House – officially THE best breakfast in Oregon!!!! Paired with two deliciously massive cappuccinos, the food warmed us up immediately. We waddled out of the place, and rolled onto the bikes, full to the brim with delicious food and fond memories of the place. If the food program continues at the same pace, our waistlines would definitely stretch wider than the sides of our not so small bikes…

All travel books and websites say that the Oregon coast is beautiful. This was one of the reasons we wanted to ride it all the way from North to South. The beauty, this way, was expected. The surprising part was the sheer intensity of it all. The colors, the views, the air – that intoxicating combination of freedom, beauty of the surrounding world and openness to all its elements – THIS was what life was all about! From the vista points along the coast we could see the ochre dunes of Oregon stretching for miles and miles along the ocean line, the pastel colors of the sand mixing with the light blues of the waters, and looking almost surreally deserted.

We said good-bye to Oregon at Gold Beach, and after a good night’s sleep woke up at another un-Godly hour to continue on our way.

The third day of the trip brought us to the place on Route 101, where a seemingly inconspicuous little road veers off it, leading into the sun-filled coastal woods. Don’t get tricked by the humble start – the little road unfolds into the fabled and magnificent California State Route 1, which did not get called the All-American Road for nothing.

I could have done without the fucking curves, though… At its very beginning, and for about fifty miles or so, Route 1 boasts some of the steepest and bendiest curves, that could easily compete with the hardest motorcycle roads in the States. Every motorcycle enthusiast wants to ride the Dragon Tail in the Smoky Mountains, which 318 curves in 11 miles are considered one of the most challenging bike routes on the American continent. Having accidentally done the Tail only three months after getting my motorcycle license three years ago, I can wholeheartedly vouch that the beginning of Route 1 is no joke either. The road may be famous for its scenic views, but it has some curves to its name as well – many with the official speed limit set at 5 mph. After the rather relaxing 101 part up north, these took a bit of getting used to. Just when you thought you’d get a bit of a breather after a particularly tight and narrow turn, another, even steeper and narrower came up – on a tall cliff with no railing on the side! I liked the ocean, but preferred to admire its beauty from aside, and was in no hurry for a close encounter involving a fast drop into the waters from a tall rock with a motorcycle for company. It took all my strength, concentration, and riding skills not to make that dip.

If the second day’s color was ochre, the third was definitely painted red! One of the must-dos on our list was the Great Redwoods. The Redwoods were close to the state border, so we slowed down right after crossing into California and soon turned off the road, following the Avenue of the Giants sign. Snaking among the magnificent giant trees, the tops of which seemed to disappear into the clouds, the Avenue was the road of a lifetime. The huge sequoias were standing tall and proud on both sides of a narrow path, with the sun barely making it through their thick crowns. The place was absolutely mesmerizingly magical. Empty and quiet (somehow the swarms of visitors we noted at the entrance to the park dissipated within the perimeter without any trace), sunlit bright and mysteriously dark at the same time, it would be a perfect set for an ancient fairy-tale of the olden days when giants roamed the earth, elves fluttered in tree tops, and witches plotted their shady feats in the forests.

The end of the third day of the trip brought us to Fort Bragg, where we decided to explore the local beer culture the residents were consistently boasting about. I wisely stuck to wine, but Nic was intent to test the local produce. Fort Bragg was proud of its brewery, situated across the road from the Tap Room – the dining venue of our choice, and all 20 (!) varieties of local beers were on the tasting menu. Having diligently tried them all (mostly pale ales), Nic’s verdict was harsh, but honest: only one was semi-drinkable. The other 19 left a disappointing sediment, and his tender soul was forever hurt by the unpalatability of the hop & yeast concoctions of the North American continent. The West Coast might have gotten the coffee memo, but definitely missed out on beer. Boston’s Sam Adams will give a 100 points forward to any of the micro-brewery gems of Oregon & Washington. Sad, but true…. But then, again, we have been spoilt by German beer, so anything but Augustiner is considered colored water by the true connoisseurs.

After three full days on the bikes, both our left hands were tightly clutched into chicken-claw grips, and shoulders were aching from the strain. We are office people, used to slaving our days in front of computer screens and much more dexterous with a mouse or a coffee machine button, for Chrissakes!… Our bodies were in semi-shock from the abundance of physical activity (if only localized) they were suddenly experiencing. Well, we had a bit of a surprise for them – we had 12 more days to go! Not all of them on the bikes, true, but the bodies better catch up!