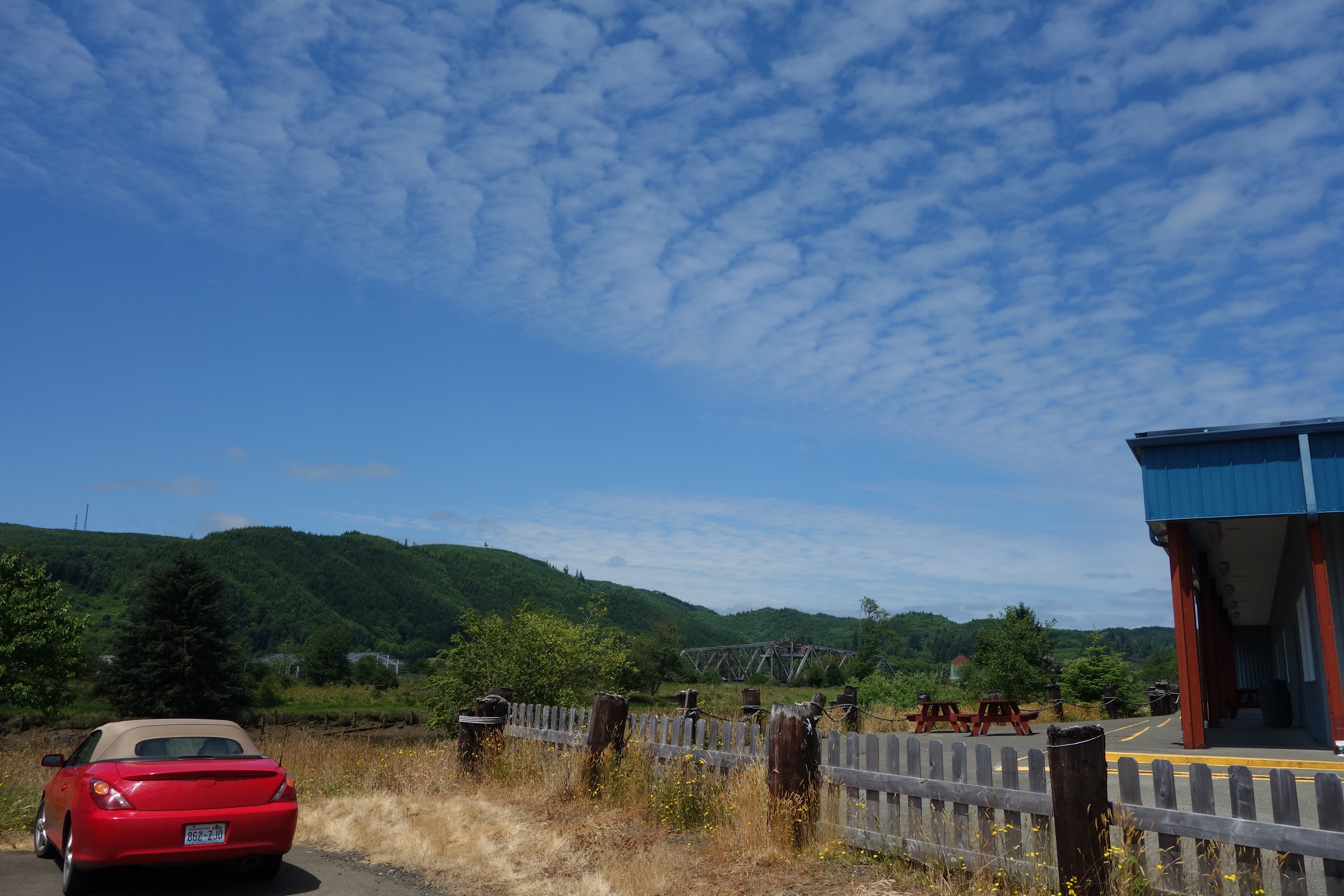 After two days of catching breath and fixing teeth, we were all ready to start our trip. But first, a few more words about Seattle in general and the Pacific Northwest (i.e. Washington and Oregon states) in particular (or shouldn’t it be the other way around?…) Anyway, a few things really stood out.

First, and most important – this part of the West Coast did get the coffee memo! Hooray!!! Unlike in the rest of the country, here you can order an espresso, or a cappuccino without drawing blank stares and getting lukewarm brown water in return. Not only that – they actually took the coffee culture to the whole new level of convenience, and both states could boast numerous Espresso Drive-Ins all over the place. All looked like little garden shacks, painted and decorated according to owner’s (or staff’s?) tastes. They were randomly positioned in empty parking lots, along busy country roads, as well as many other less obvious places, and offered quick and tasty coffee service to the needy masses. Rumor had it that in some areas of Seattle the competition was, apparently, so high, that the fight for clientele brought out a chain of topless espresso drive-ins, to the joy of all morning male commuters. A quick search on the Internet confirmed this information – names like “Cowgirls Espresso” and “Bikini Barrista” were hard to miss. You can get your morning coffee and stare at tits – an irresistible combination for every male starting with an age of zero! Add beer to that, and you would have to beat the customers off with a shovel. Long live American entrepreneurship! Paired with our recent memories of the Solstice Day Parade, the whole thing set us thinking that there was something about Northernes and nudity, after all… I am now impatiently waiting when a competing chain would offer similar edge and joy to female coffee junkies as well. If nobody came up with the idea yet – here it is, I donate it to the world, and vouch to be the first and regular customer!

The second thing was wine. And while everybody heard about Napa Valley, and Californian wines of the bottom shelf variety are generally available in even the most backwater places on this planet, this is where the imagination of the general population stops. Well, I am proud to say that we definitely broadened our horizons and joined the sophisticated in-crowd by discovering not only fantastic Washington State and Oregon wines, but also gorgeous Canadian wines! No matter that the combination sounds like an oxymoron – there IS wine in Canada! Not only moose and winter Olympic Games (that used to be the height of my personal knowledge about the country). Surprise, surprise – not only do grapes grow “up North”, they turn into really good wines. You can’t buy them anywhere but in the area (the cunning Canadians save the good stuff for themselves), but some of the precious bottles trickle through the border to Washington state, and once in a lifetime even end up in the palates of stray visitors from the European continent. Respect and applause to Canadian winemakers! We really should visit…

The third, and a very politically incorrect (although, when did that scare us off?!) discovery, was an abbreviation learned in Seattle and experienced throughout the Pacific North-West: the notorious DWA, or Driving While Asian. Somehow, despite the diversity of the United States throughout, I never heard the expression in other parts of America. Maybe because the phenomenon is localized to Pacific North-West and does not manifest itself so strongly in other parts of the country, or even lower down the West Coast than San Francisco. We already noted the zombified drivers at the Seattle Tacoma Airport upon arrival. Having driven through Seattle and made it through the Washington and Oregon States, we suffered through this regional phenomenon first-hand. Bad driving paired with unbelievably slow reaction times are the two main characteristics of DWA drivers. It might have started as a racial stereotype, but quickly took over the area, spreading like one of those non-threatening, but speedily communicable diseases you catch once, and get for life. A road herpes of sorts, if you wish. We encountered DWA drivers of all creeds, races, sexes and ages – they were all over the place! Alas, there is no cure – you just have to brace yourself, and bear with them…

Back to the main topic, though. The road trip was about to begin!!! Three months ago (yes, we are good at planning like that!) we ordered two Softails with Eagle Rider through our German travel agent. The agent specialized in road adventures, gave us a good discount (the stern German lady behind the counter was positively charmed by Nic’s sweet blue Irish eyes) and swore that the bikes were ours, all but guaranteeing the color. In reality, all those promises turned out to be clear and sheer bullshit. When we pulled into the Eagle Rider‘s parking lot in Seattle, in anticipation of our BIG ADVENTURE, the two bikes waiting for us there were anything but Softails. They were Harleys, all right, but at this the similarity with the ordered vehicles ended. We were looking at a Fat Boy and a Road King – both way bigger than what was ordered and expected. I was a bit skeptical about my ability to handle a heavy machine, and poor Nic already had not been impressed with the Road King during our East Coast adventure last year, and specifically did not want it. Well, looks like you can’t escape the Road King, after all…

To the credit of the guy entrusted with customer interaction at this particular establishment, he was very apologetic, and helpful beyond belief, trying to sell the change of bikes as a free upgrade. He was even ready to throw in two Electroglides (huge motorized sofas with everything but a built-in washing machine) for the same price, but we happened to be the only two freaks who wanted smaller bikes, not bigger, so his kind offer did shit all to calm down our concerns. After a brief disappointment we decided to go with the flow and live with what was on offer. Not that we had a choice – the dealership did not look over-supplied with bikes, so it was these two or nothing.

My Fat Boy was silver in color, and had designer loud-as-fuck pipes – a definite advantage, that made me sound like an aspiring ghetto gangster. It was heavy, but manageable. Californian license plates on it suggested that the change from the ordered Softail may not have been accidental – the bike was going home to Los Angeles, where we were supposed to drop it off.

Nic’s Road King, though, did not support this theory – it was proudly decorated with Florida license plates, making one wonder how on earth the bike made its way across the country to Seattle. We insisted on having its fender and sissy bar taken off, and they stayed in Seattle – how exactly Eagle Rider was going to juggle all this was beyond our understanding. But then, again – we were on vacation, and were trying to make the best of it. Thinking hard was not on our program.

We packed our shit into the side bags, strapped our rucksacks to the bikes, hugged Cindy good bye, parting for the next two weeks, and were ready to go.

The first couple of hours were spent getting used to the bikes, and figuring out the GPS with its totally conflicting messages. A word of wisdom (and this is two weeks of sweat, tears and curses speaking, my friends!): if you have a choice between Garmin and anything else for your road navigation on a motorcycle – choose anything else. Garmins were originally made for boat navigation, and should never have been allowed on dry land. Our particular device had multiple personalities, and every now and then suddenly decided that it was navigating a car or a pedestrian, urging us to turn into nearby bushes. In addition to this rather annoying quirk, it did relatively ok in the middle of scarcely populated areas, but was completely lost even in a village, let alone a city.

On comparison, the bikes were much easier to handle. Having figured out the turn signals, and the ever-evasive neutral, we fell into the road mood. From aside, we must have been an interesting pair – Nic’s bike was bigger and dominated the road, but my pipes were definitely louder. Would have made for a great title of a redneck biker blues – “His Bike Was Bigger, But My Pipes Were Louder“. Definitely sounds like a number one hit!

The main objective of the first day was to reach the coast. Getting out of Seattle turned out to be easier than we thought, and on the border between Washington State and Oregon the road lay through the beautiful Astoria-Megler Bridge. Connecting the two banks of the Columbia River right at its mouth, and stretching to the horizon, the bridge was definitely a sight worth stopping for, legally or otherwise. Elegant in its simplicity, Astoria-Megler stretched over 4.1 miles (6.6 km), and while most of it lay low parallel to the water line, the three spans (out of the total 33) closest to Oregon rose high like a big hump to allow the big ships to pass. We stopped right before the turn to the bridge for a picture opportunity – the bridge looked impressive, and seemed way too long to fit into any photo. Riding along it surrounded by water was a majestic experience. The rise before the end looked like a mountain climb from a distance, but turned out to be surprisingly smooth and almost un-noticeable first-hand.

In the afternoon of the first Monday of our trip, tired but happy, we reached our planned destination – the ocean-side town of Roackaway Beach. Once upon a time it was probably meant to be a holiday town, but the short Oregon summer fills the place for a week a year, if that. In the end of June Rockaway Beach looked utterly deserted, and there were plenty of rooms to be had (true to our nomadic holiday traditions, we did not book anything for the trip). Having surveyed the area, we set our sights on Silver Sands – a lovely motel sitting right on the edge of the sand dunes of the beach. Our room opened up to the ocean, and even in calm weather with no wind, you could hear its quiet but overpowering might.

After a much-needed shower, we walked through the town in ten minutes (both ways), got dinner in the only place open for business, and turned in for the night. One day down, fourteen more to go!