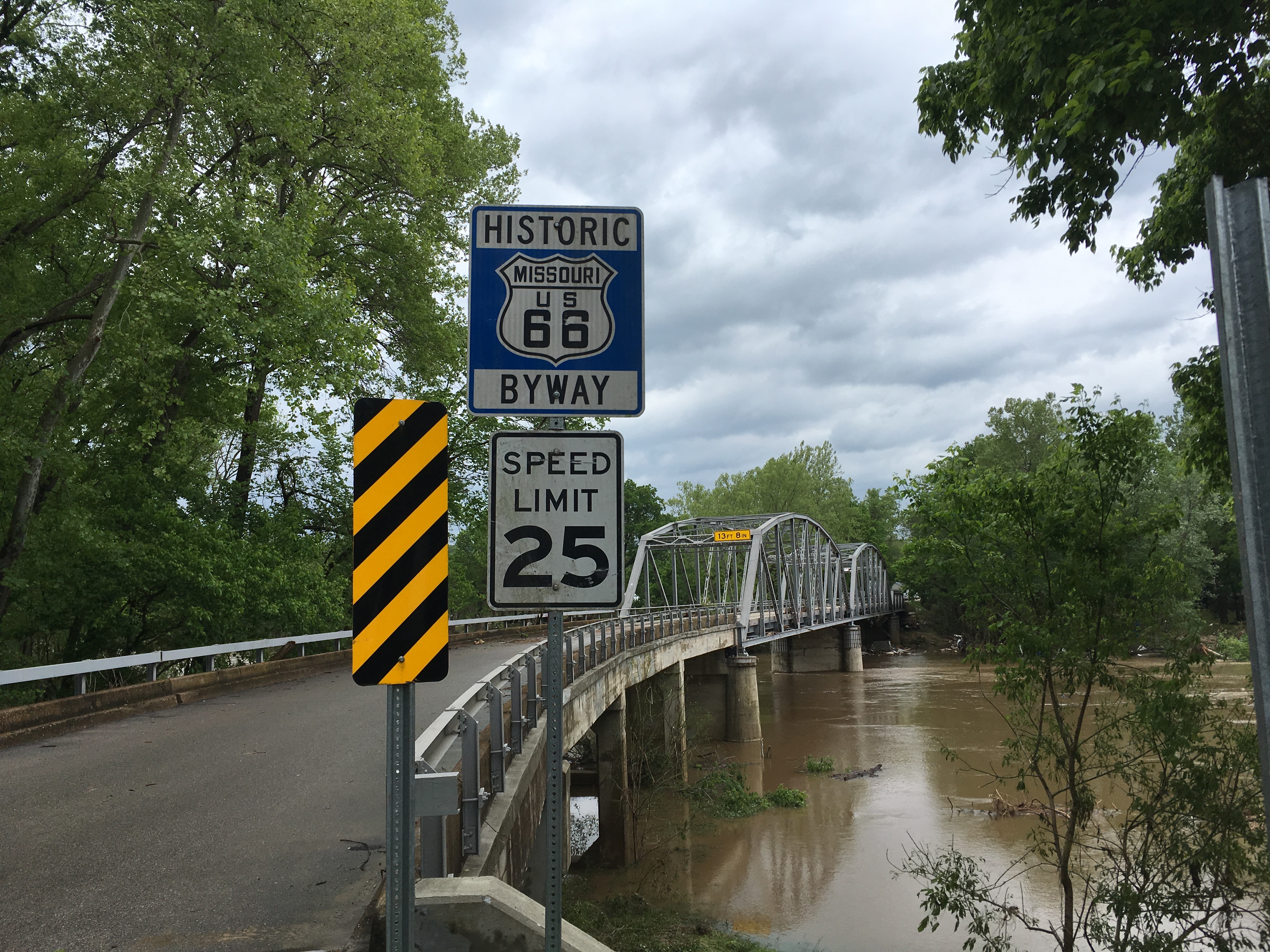 The following morning did not show much change in weather – it was still pissing down…  We impressed yet another Union Station doorman with our intent to ride out in such conditions, and were on our way, with fond memories of St. Louis and the beautiful hotel in our hearts.  The weather made some corrections to our thoroughly planned route – Interstate 44 was flooded over.  We saw lovely footage on the news of an Interstate bridge under water, and incorporated a detour, getting out of St. Louis through 64 and re-uniting with Route 66 at Ellisville.

Getting out of St. Louis could not have been easier – a straight road led us out of town, and we continued on the way with almost zero visibility.  This was a serious downside.  Generally, one prefers to see the road ahead along with the possible bends, hurdles, as well as other traffic participants.  Deprived of this basic motorists’ right, after riding just 50 miles in such inhumane conditions, we pulled over at the next gas station.  Dry environment with hot coffee were very much needed.

Trying to thaw our sorry asses, I vaguely remembered riding past what seemed to be a herd of camels on the side of the road.  The camels were numerous, stoic, and were proudly chewing some shit within spitting distance from the traffic. Camels in Missouri?…  What the fuck?…  I shared my observation with Nic, but was met with a blank and mildly worried glance – he did not see anything of a kind.  Well, considering the almost zero visibility, the camels could have been a group of malnourished cows…  Or just a figment of my tired imagination.  I readily agreed with both options, but secretly stuck to my guns – those were camels all right!  A quick Internet search from the dry environment of a hotel several days later proved my point – camel farming was apparently quite popular in the state of Missouri, and several places were offering not only a variety of dairy produce made of camel milk, but also rides and other socializing activities.  Go figure…

But back to the gas station.  Coffee in America generally sucks (unless you are on the West coast, but that’s a whole different story), and the deeper you go into the continent, the less appealing the brew.  Moreover, gas stations employees have never been famous for their barista skills, so you normally don’t hold your breath for anything you get on the way, and appreciate the gas station coffee for what it is – a nondescript brown anti-freeze.  This time it was paired with a much-needed dry factor, and a friendly elderly lady working there, who commiserated with us and even offered some old newspapers to stick in our soaking wet boots in a futile attempt to dry them out.  Human attention and hot coffee helped, but unfortunately, we could not stay at the welcoming gas station forever chatting with the lady about her long-forgotten Irish roots…

The detour added another 120 miles of wet and miserable Missouri roads to our itinerary, but we had no choice but to brave them.  The rain stopped suddenly somewhere around Rolla, Missouri, but was immediately replaced by torrential side winds, threatening to either push us off the road, or under the wheels of gigantic trucks, overtaking us on all sides… Great!..  On the plus side, having first frozen our wet asses almost to the state of those shrunken fish fingers you sometimes find forgotten in the back of the freezer during annual cleanup, the winds then managed to almost dry our gear, so in the end we could not really complain.

Due to the lovely weather conditions we were forced to miss several sights on our list, but were absolutely intent on stopping by the Devil’s Elbow bridge near the town with a similar name.  The bridge opened in 1923 and served as the river crossing for Route 66 traffic from 1926 to 1943.  The name of the town (and consequently the bridge) came from a nearby bend in the Big Piney River that was so severe it caused massive logjams of railroad ties being floated downriver.  We could witness the jams first-hand, as by the time we reached the bridge, the town was almost swept over by the torrential rains, and piles of debris were stuck in the river bend.  The bridge itself was as picturesque as all the guidebooks promised it to be – with dramatic rain clouds in the backdrop and the storm debris in the fast waters underneath, the bridge stood picture-perfect in all its historic glory.  It looks quite big on the photo, but in reality was a narrow one-way road, and having ridden over it, we could not but marvel at how huge things have become in the modern day – next to the likes of the Astoria-Megler Bridge of similar shape on the West Coast, separated with the Devil’s Elbow by just 40 years, it was but a tiny little baby brother.  We admired the baby bridge, took the obligatory tourist photo, and moved on through the fields and pastures of Missouri.

The stretch of road between Devil’s Elbow and Carthage got remembered by the abundance of pastures, all surrounded by fences with miles-long Bible quotes on them – if only the cows could read!…  They didn’t really seem to mind, and were grazing about with the sanguine looks so typical of the bovine family, without getting overly enlightened.  Although, on second thought, maybe the Bible quotes on the fences made their meat more tender, and the milk more nutritious…  Or just generally more kosher and attractive to the general God-abiding public…

The old Courthouse of the town of Carthage was listed in every single Route 66 guide book as a must-see.  2 hours through the Bible fields, and we were there!  It is, apparently, the 2nd most photographed building in the state of Missouri after the Gateway Arch in St. Louis, and having been at (and photographed) the latter, we were not going to miss out on the 2nd one!  The town of Carthage also happened to have been the sight of the first land battle of the American Civil War, aptly named “the Battle of Carthage” (my knowledge of American history is not that great – I read this all in a book long after we left the state of Missouri, but thought I’d mention it here for the benefit of others…)

The plan for that night was to stay in the town of Galena, not known or famous for anything in particular, apart from being the only town in Kansas that Route 66 went through.  Never ones to miss out on the opportunity to add an extra pin to the extensive world map on our wall, boasting places we’ve been to, as well as my personal list of the US states I visited, we were intent on spending the night there.  Despite the visible absence of places to stay, we managed to locate two lodging possibilities with the help of Google Maps and intensive search of the Internet in advance of our visit.  Upon close inspection, one of them turned out to have burned down a long time ago, which narrowed our choice down to one – The Galena Motel (no website, and having stayed at the place we know why…)  The establishment has definitely seen better days, but it being the only lodging option in town, we could not really complain.  I resolved to spending as little time in the room as possible, and sleeping in my clothes when the night-time came.  I still think this was a safe choice.

We threw our stuff into our questionable digs, and went on a walkabout.  After a lot of cheerful smiles, and the upfront payment for the room in cash, the gloomy motel proprietor reluctantly shared dinner recommendations: there was a Pizza hut, and two Mexican restaurants – one good, one bad.  After additional intensive questioning he coughed up the name of the good one – Mi Torito.

The town was easily walkable, with buildings and streets in varied state of decay, but trying its best to keep up the brave front.  Once a busy and prosperous mining community (the name Galena comes from the primary ore mineral of lead), during World War I it was among the largest producers of lead and zinc in the world, and a population close to 15,000.  The closure of the mines and the construction of Interstate 44 that replaced Route 66 as the main thoroughfare resulted in a downward spiral of Galena.  According to the 2000 census it had less than 4,000 inhabitants, and having seen the place up close and personal in 2017, we can bet the numbers must have at least halved over the last 17 years…  The town was fighting back, though – in addition to the Galena Mining & Historical Museum downtown boasted a series of murals and sights, carefully preserving the Route 66 spirit, and telling the story of the town and its people.

We enjoyed the walk through town (you could literally walk from one side of it to the other in under 20 minutes), in the rays of the setting sun – it was so refreshing to not be drowning in the rain, and the blue sky was a welcome sight!

The nice early dinner at Mi Torito warmed our stomachs in addition to our hearts, and after 320 miles on the road that day (we only counted those made on the bikes) happy and content we turned in for the night.  In full clothes and socks.