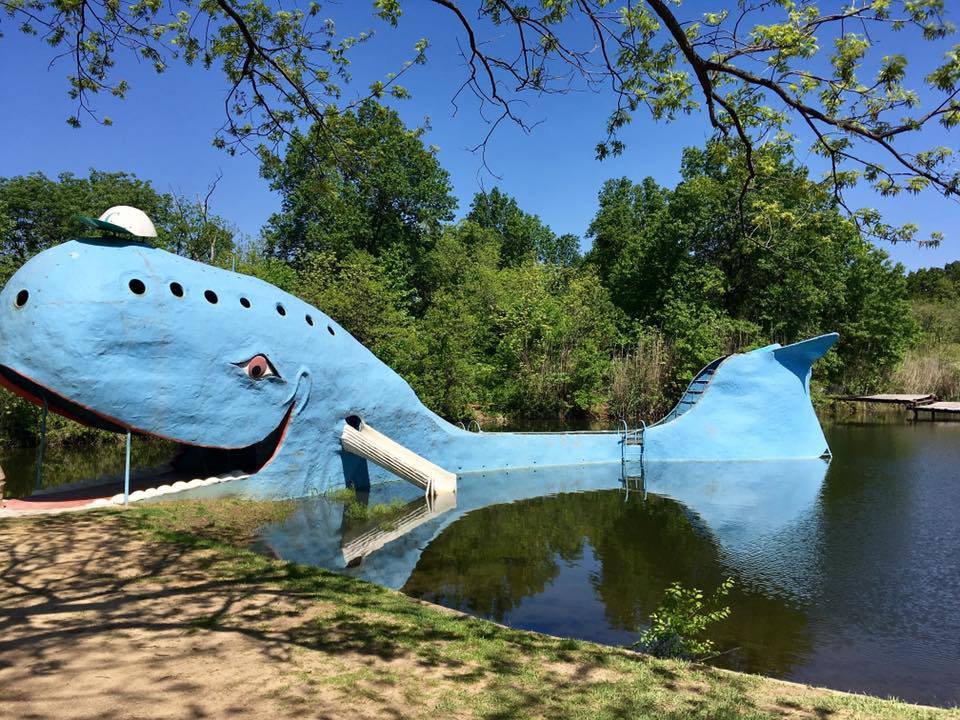 The next morning we woke up to something quite unusual – the blue sky!  So far, every morning greeted us with rain and shit, so not having to put on the waterproofs was a welcome change.  Hoping it would stay like this for at least a couple of hours, we defiantly packed the waterproofs in our side bags, said good bye to our unwelcoming digs in Galena, eat breakfast in the only town’s diner that we could not locate on the map for love or money, but that was pointed out by several friendly locals the night before, and continued on our way.

With the weather continuing in the non-rainy mode, we actually stood a chance of doing the sightseeing plan for the day.  Our first stop, just an hour away out of Galena, was the Ed Galloway totem pole park.  A wacky collection of concrete totem poles, decorated with elaborate and colorful wood carvings was set on a green field off the road. Lit by the rays of the morning sun, with a backdrop of piercing blue sky, the poles looked absolutely magnificent in their grandeur.  Built by a retired manual crafts teacher, the totem pole park quickly became one of Oklahoma’s landmarks and a Route 66 icon.

It’s a tribute to Native American culture, and the imagination of its creator.  The center piece of the park is a giant Totem Pole building, built on top of a huge concrete turtle that seems almost squashed by the weight and size of the main building.  The place was not overrun by tourists – together with us only two other visitors were walking around – a retired couple that tried to park their car as far away from our bikes as the tiny parking lot would allow, and kept shooting us worried looks from across the field.  The looks were totally unprovoked – even though we skipped the shower for purely hygienic reasons this morning (an oxymoron in itself, I know, but the Galena motel did not really call for a more intimate acquaintance with its facilities…), I don’t think we started smelling just yet.  We were also friendly, and smiled reassuringly across the field at the old couple, but maybe just the size of our bikes, and predominantly black clothing made them cautious…  We did not test their nerves, and having taken a couple of obligatory tourist photos went on our way, waving the couple good-bye.  Despite the loud pipes of our bikes I could almost hear their sighs of relief…

Iconic as it became, the Ed Galloway totem pole park can rather be attributed to the lesser-known sights of the Mother Road, known only to the initiated individuals.  Our next stop definitely made it to each and every book about the Main Street of America, and became one of the most recognizable attractions on Route 66.

The Blue Whale of Catoosa

The famous Blue Whale of Catoosa was part of a recreational park, built by Hugh Davis, a wildlife photographer and curator of the Mohawk Zoo in Tulsa between 1970 and 1972, and together with canoe rentals and a small zoo served the entertainment needs of the people of Catoosa.  Initially an anniversary present of Hugh to his wife Zelda, and built on their private property in a small pond, the whale became so popular with the locals, that the Davises opened the place to the public, and adorned it with picnic tables, said little zoo, and other entertainment options.  They only managed to keep it running till late 1980-ies, when it closed to the general public and after the death of first Hugh and then Zelda, fell into disrepair and abandon.

The whale was too good (and famous) to let it disappear into oblivion, though, and at the beginning of the 21st century the local community restored the blue giant to its original glory.  It is now open daily, “from 8am till dark”, has a tiny gift shop, and welcomes visitors and Route 66 enthusiasts from all over the world.  The pond has not been cleaned since 1970-ies and grew over with algae and grass, so even the big “No swimming” signs aside, one would hardly think of dipping into the brownish-green waters, and the whale’s slides have not been used for a long time, you can still imagine how much fun the place was back in the day!

The Blue Whale of Catoosa also got forever engraved in our memories for the best tacos in the world we got from a colorful little shed with the name of “Molly’s Taqueria” perched on the side of the Whale’s car park.  We ordered two helpings, and were so impressed with the amazingly flavorful and beautiful food that forgave the owners for the blatantly pro-Trump stickers decorating the shed and the car parked next to it.  Which was the second oxymoron of the day – considering the man’s views and politics, the last people you would imagine supporting him would be the taco food truck owners…  Yet, here we were – America, the land of contrasts…
But anyway – fuck politics!  We were just here for the tacos.

When travelling through the United States on the road, the easiest way to observe the change in landscape and climate zones is through the roadkill.  Somewhere around Tulsa, the possums and raccoons of Illinois and Missouri started getting mixed up with the armadillos of Oklahoma and by the time we hit Texas, this was the predominant species decorating the sides of the road in a variety of ran over and squashed forms.  But I am getting ahead of myself – Texas was still at least a day ahead, the stop for this night was planned in Oklahoma City.

Not before stopping for yet another roadside attraction – the Rock Café in Stroud, Oklahoma, known to general public by the Pixar Animation Studios movie “Cars”.  Here we blended right in!  A group of large rough-looking men on shiny giant motorcycles, more resembling motorized sofas than transportation vehicles, watched us park our own sofas next to theirs, offered compliments on my parking skills, and commented on how great it was to see a woman riding her own bike instead of being on the back.  Finally!!!!  The validation I’ve been craving!!!!  I was so glad I did not drop the bike, or did anything stupid in front of this appreciative audience! 🙂  While we definitely missed on the body size (it will [hopefully!] be a while till our general physique will fit in with the more mainstream biker crowd), we were accepted and recognized for the riding skills and engine size.  Well done, us!

With the beautiful Trump whale tacos still warming our stomachs, we weren’t particularly hungry, and stopped at the Rock Café for its memorabilia value, but once there, we decided that coffees were definitely on the menu.  Coffee in, we also got tempted by snacks – a chili hot dog for Nic and a portion of fried green tomatoes for me.  Why can’t you find the fried green tomatoes in Europe?…  Is it against some obscure EU rule to cook unripe vegetables?…  I have no clue, but state this fact with regret, as this simple and easy to prepare snack definitely deserves to headline European menus!  Snacks or no snacks, the portions of food we ordered were gigantic.  Nic braved his chili dog, but I barely made a dent in the pile of fried green tomatoes in front of me, and had to apologize profusely to the homey waitress, who was genuinely concerned with my lack of appetite.

By the time we waddled out of the cafe, our biker friends were long gone, and the weather changed.  It was still sunny, but strong winds were blowing at gale force, and we mentally thanked the giant portions that definitely contributed to us not being blown off the bikes on the way to Oklahoma City.

Traumatized with our Galena Motel experience and longing for a proper hot (and hygienic) shower, I scraped together the hotel points, hard-earned over the past dozen years, and booked us a night in the beautiful Skirvin Hilton in Oklahoma City.  In addition to the said hot shower, the hotel also advertised free parking, which cemented the deal in our choice of accommodation for the night.

The hotel was, indeed, beautiful, the parking spacious and free, the room grand and spotlessly clean (which was a welcome change from Galena, and did not necessitate sleeping in our riding gear), and the shower hot.  We were in heaven!

After enjoying the facilities and washing the road off our faces and bodies, we were ready to explore the neighborhood.  A quick walk through downtown, proved Oklahoma City to be a nice and agreeable place, full of wacky sculptures, and a huge botanical garden near our hotel, which was, regretfully, closed.

We consoled ourselves with searching out the nearest wine, bar, and promptly landed our asses in the middle of the local party and dining scene in the Sidecar Wine Bar.  The evening was spent nipping into Zinfandel, watching people and life go by, and later in the evening making friends with the locals.  A couple sitting at the bar next to us, somehow gravitated into the orbit of our conversation (or, maybe, we butted into theirs – after 2 bottles of wine, who remembers?…), and provided the entertainment for the evening.  The guy was chubby, puffy, quiet and paid for the drinks that the girl kept steadily ordering.  The girl was beautiful and loud, spending the better half of the evening (the one that was not dedicated to consuming endless cocktails), trying to prove to the surrounding world that she was not trash, achieving the absolutely opposite effect.  Together, they presented an odd couple, and we could not help but wonder what brought them together.  Even after 2 bottles of wine, we were too polite to ask, of course, but having compared notes the following morning, we agreed that they must have been a stripper and a client on an out of work date.  Good for them!

The evening was definitely memorable, and we were proud to have found the way back to the hotel well past midnight.