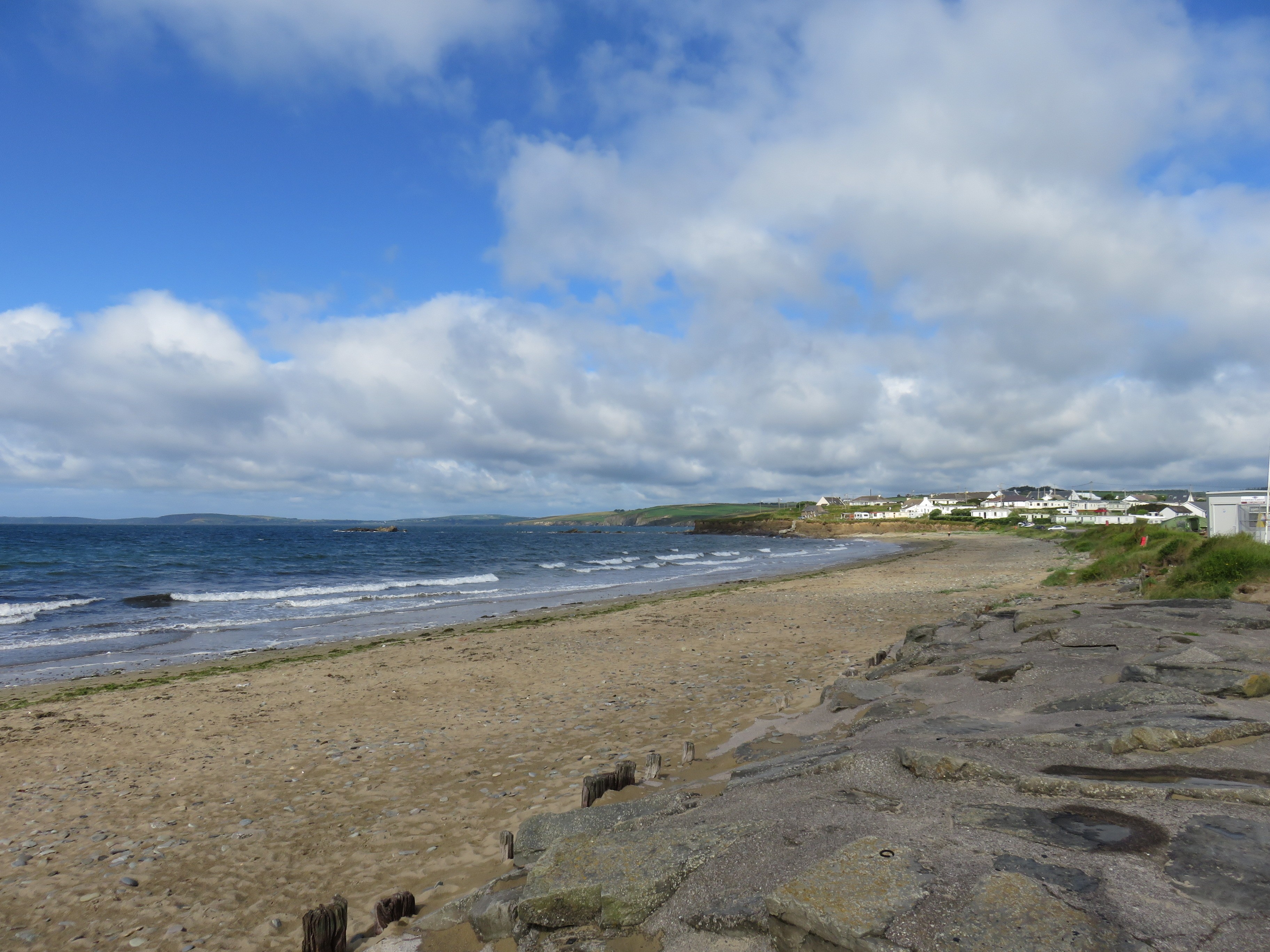 After a hearty breakfast (looking back on our trip, The Waterside House offered the best we’ve had on the road!), we packed the bikes and set on our way. The adventure was beginning for real – we were at the start of The Wild Atlantic Way!

It took us only 10 min to get to the ocean, and we simply had to stop to admire the view! This was not your regular boring beach with turquoise waters and beach-whale tourists peppering the yellow sands. The ocean was dark and stormy, with the white wave breaks temperamentally accessorizing the regal grandeur of the waters closer to the beach. The only beach accessories in view were rocks and shells, adorning the ochre sands. Although the day was sunny, the low morning temperatures (luckily!) kept the tourists away and the beach was beautifully deserted. With quiet determination, big white puffs of clouds were trying to get close to the ocean to admire their own reflection, but the wind was spoiling the fun for them. You could almost hear the clouds sigh in frustration and resign to floating over the waters in restrained dignity of big white and grey chunks of cotton. The dark blues, greys and whites of the waters and clouds, combined with the ochers of the sand, were picturesquely adorned by the emerald-green fields and bright white houses of the nearby village on the hill.

Magnificent as the view was, it was not the surest indicator of the ocean. The scent – that’s what gave it away, long before we could actually see the waters!

Travelling on a motorbike, with only a leather jacket and a helmet visor separating you from the elements, is the best way to experience the world around you. You see and feel everything around you with magnified clarity, and experience the world in an un-interrupted, un-censored and un-filtered way. Sometimes (like when you are riding through a heard of farting cows) this is definitely a disadvantage. Most of the times, though, this is something to be cherished and enjoyed. Like when you are closing in on the ocean, hearing the increasing rumble of the waves and smelling the unmistakable mix of salt water, sea weeds, and sand.

For me riding a bike is a quintessential expression of freedom. Ultimate, absolute, no questions asked, wind-on-your-face, open-to-the-world kind of freedom! Is there any other?…

Having paid our respects to the ocean, we headed on, following the plan hastily drafted over the hearty breakfast at The Waterside House. Following The Wild Atlantic Way, we wanted to get to Ballydehob on the Mizen Ring Peninsular, stopping on the way in Glandore to see the nearby Drombeg Stone Circle, explore the peninsula’s coastal roads, visit the village with an intriguing name of Skull, and then make our way to Bantry, where we planned to spend the night.

On the way to Glandore, we stopped numerous times to enjoy the views. One of the spots called for special attention: on top of a mid-size cliff, we had the ocean on one side, and the endless green fields on the other. The ocean waves were dotted with slim and perky surfers, bouncing on the waves in their sleek neoprene suites. The fields were adorned with big, morose-looking cows, slowly chewing on the grass, sulking at the world and staring at the surfers with big melancholy eyes. The two sides of the road could not have been more different from one another! Yet, together surfers and cows represented a unity of opposites that somehow worked just fine. We paused to contemplate this contrast, and continued on our way.

The next stop was Timoleague. It was not really known for anything in particular, but could boast a 13th century Franciscan Friary with a very picturesque cemetery. We commemorated our visit by having our picture taken by two friendly Dutch cyclists, who were doing The Wild Atlantic Way on bicycles (nutters!), toured the cemetery, and moved on.

While jotting down the itinerary during breakfast and reading Lonely Planet out of a corner of my eye, a “national heritage” sign next to Glandore caught my attention. The guide promised “atmospheric stones of the 5th century AD” and we decided to throw in some culture into our otherwise rather unsophisticated plan. The Drombeg Stone Circle was not as easy to find as the book promised, though. We took a couple of wrong turns on narrow paths that hardly classified as roads, finally noticed the sign, half-covered by the roadside shrubs, indicating the direction to this place of historic and archaeological significance. The stones were nice – some 15 centuries ago somebody neatly arranged them in a circle, throwing a couple random ones on the side in this rather remote place, and the whole ensemble weathered the time quite well. Don’t know whether the sight’s longevity can be attributed to the location or the hardiness of the stones, but I bet they have not changed much from the 5th AD. The fields around them looked quite picturesque and full of life. We could see the ocean in the background, cows and sheep spotted the hills around, and the change of sunlight and cloud shadows provided a very flattering backdrop to the old stones. All in all – a worthy cultural detour!

We skipped the first, unnamed peninsular of the South-West, and with the exception of Castletownshend (which the Lonely Planet described as “one of Ireland’s most enigmatic villages”), we did not bother with the ocean views. Castletownshend was ok, with a big castle towering over the town, but we only rode through it, so there wasn’t much to write home about.

Throughout the whole of our 2nd day on the road (and the remainder of the trip) we were desperately looking for puffins. Those cute little black & white birdies that live on the side of the cliffs (of which there were plenty on the South-West coast of Ireland!), and look really neat with their big orange feet and matching orange beaks. Every guide-book we read promised puffins a-plenty all over the coast. Hard as we looked, we did not see any… I personally even went as far as to ask every friendly local we stroke a conversation with about the birds, and they all readily admitted that yes, there were a lot of puffins around, and we should not have any problems spotting them on the coastal cliffs. Alas, the Irish luck was not with us on the puffin front, and the cute birdies remained unseen…

The Mizen Ring Peninsular was the first one we explored quite thoroughly, religiously following the extremely well sign-posted Wild Atlantic Way, and enjoying the views. There weren’t many bikers on the road, and to our surprise the cyclists outnumbered motorized riders by about a dozen to one. The Dutch nutters were, obviously, not alone.

After all the mad and long riding the previous day, we took things easy, and by mid-afternoon decided to call it a day in Bantry. A nice little town with picturesque houses in the mouth of Bantry Bay. When we arrived in town, the bay was completely empty of water, and all the boats were sitting in the middle of it in yucky mud. By the morning, the picture changed dramatically – the tide waters filled the harbor, brought the boats to their rightful height, making the view splendidly maritime again. We parked the bikes on the main square in the harbor, looked around, and decided to knock on the door of the first building proudly wearing a Bed & Breakfast sign. Barry’s Bed & Breakfast (no website) turned out to be a lucky find – bang in the middle of town by the harbor, with clean and spacious rooms, and big and modern showers, it was a welcome retreat after a day on the road. We immediately took the full advantage of the facilities, and clean and showered went to explore the town.

At second sight Bantry made as good an impression as at first. Clean, cozy, with neatly arranged flower beds, brightly painted houses and friendly smiling locals, it looked welcoming and cheerful. We had an obligatory pint of Guinness (or two) in a local pub, and then dined on mussels and oysters in a classy O’Connors Seafood Restaurant. We only stayed in Bantry for the night, but wished we could spend more time there. If anybody’s thinking about driving around Ireland, and County Cork in particular – Bantry should definitely be on their list!