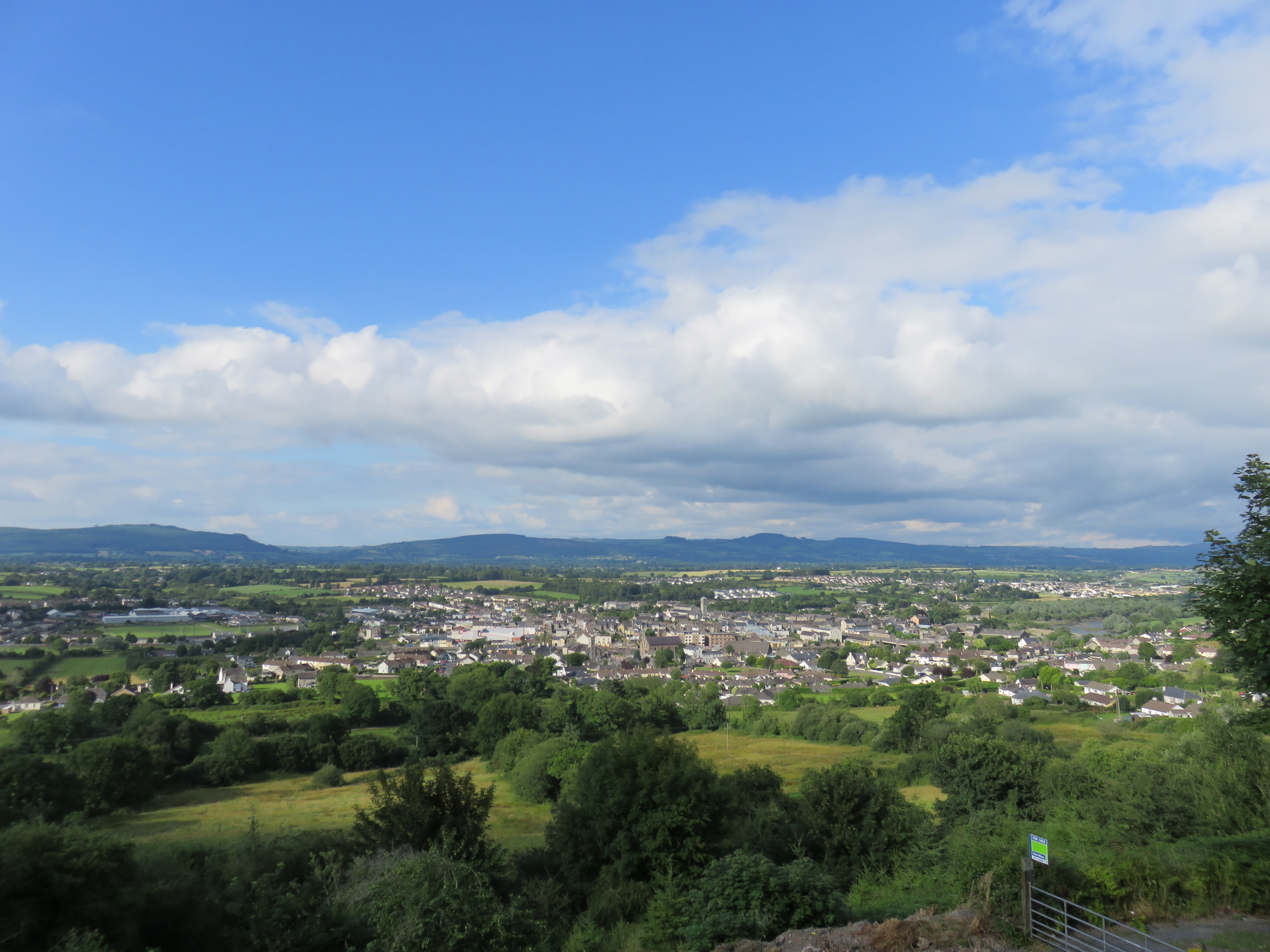 On Saturday morning, we woke up giddy with anticipation – our long-awaited road trip was about to begin! We packed our shit, checked out of the hotel (not before securing it for one more night in a week’s time before our return flight to Munich, though), and headed direction Wexford bus stop/aka Oscar Wilde memorial corner.

The bus came as the schedule promised, and in just an hour and a half (which also included a short ride from the bus stop in Gorey to the warehouse in an unmarked white van with a man we never saw before in our lives [but that’s a different story]) we were reuniting with our bikes and gear at the Overlanders’ warehouse.

We had two geographically conflicting objectives for the day:

I am proud to report that both missions were successfully accomplished.

The memories of the 3rd day in Ireland were mostly of the roadside variety.

With the exception of motorways, every road, goat path and country lane in Ireland is adorned with either picturesque shrubs, impenetrable trees, or a stone wall (sometimes reaching up to your shoulders). These are supposed to keep sheep, cows and other representatives of Mother Nature away from the moving vehicles, and most of the times they succeed. Other times they leave you elbowing the thickets with no room for maneuver when you are trying to part ways with a tour bus, or a construction site vehicle.

Most fields in the countryside were decorated with cows and sheep (for some reason, goats did not seem to be en vogue on the island) of varied colors, looks, and sizes. For fear of sounding overly affectionate, I had to admit that the sheep looked really pretty. Most of them had the color scheme of top-pedigree Siamese cats – beige with black legs and faces. On the backdrop of green grass they looked especially picturesque and fancy.

One other thing all Irish roads (no matter the size/absence of tarmac or animal presence) had in common was a seriously worn-down patch right in the middle. What the fuck?… All normal roads everywhere else in the world are worn out on the sides, where the car tires make a claiming dent to the tarmac surface. Makes sense, as this is where the road is being used the most. Not in Ireland!… Why? God knows!… Are Irish roads being worn down by motorcycles, as opposed to the 4-wheeled transport?… No matter who we asked, the locals made a puzzled face at the question, and could not come up with an explanation, although readily admitted the phenomenon.

Having spent the first couple of hours getting used to the roads, signs, and the general novelty of riding on the other (aka “wrong”) side of the road (much easier on a bike than in a car!), we started noticing some perverse logic with the speed limits identification. Country roads with hard tarmac that could accommodate 2 mid-size vehicles moving in opposite directions inadvertently called for a 100 km/h speed limit. Dirt or gravel goat paths, good enough for a buggy and/or donkey, proudly wore the 80 km/h signs. To the credit of the locals, none of the speed limits were observed, and people were moving as fast or as slow as they wished, regardless of what was signposted. From our perspective, speeding up to a 100 or more on a path where if you happen to meet another motorist, or (God forbid!) a tour bus – you’d be toast, was more than unreasonable.  We saw cars breaking at full speed, and then either nipping into the thickness of the fuchsia bushes on the side of the road, or backing off to the nearest clearance in the thicket. Such feats did not stop the locals, though, so the exercise was frequently and readily repeated.

Speaking about fuchsias… Another observation of the day was of the purely botanical variety. If you thought fuchsias were those nifty little plants your grandmother liked to grow on her balcony – think again! In Ireland we discovered that fuchsias were, in fact, trees. Often reaching up to over 2 meters in height and towering in a grand canopy way over your head. The malnourished ones develop into thick shrubs, still easily reaching human height, and adorning the road with impenetrable pink glory.

Used to the German anal-retentiveness, and Italian cautiousness, we were also taken completely aback by the unpredictability of the warning signs on the roads of Ireland. For the first half of the day we took them at face value, slowing down to snail pace before a sign, indicating a particularly treacherous and steep bend, only to find a slight curve of the road that anywhere else in the world would not necessitate signposting at all. With equal unpredictability, the really deadly and precipitous turns were often not marked at all, or downgraded to a mere mild curve sign.

The notorious Irish weather turned out to be another surprise. Naturally, we expected (and feared!) rain. It did, of course, rain, although just for 1 day. What was really notable about the Irish weather (at least on the coast), and what we were really amazed at, was how volatile and unstable it was. Within the span of one hour, you could experience sunshine and heat, then light drizzle would come out of nowhere, menacingly dark stormy clouds will gather in a space of a couple of minutes, and disappear even quicker, the temperature would drop and rise, and then the cycle will repeat itself in a completely random order.

The family errand in Windgap, brought us to an unexpected event – Faugheen50 Road Race. Every year nutters from all over Ireland and UK, flock to Faugheen in County Tipperary, and for 2 days race classic road racing bikes on the harp-shaped town road, closed to everybody else for the occasion. The town transforms itself for the weekend, padding the sides of the road with old mattresses, hay bells and everything imaginable. We had a chance to watch the pre-qualifications, and the noise and the speed with which the bikes whizzed passed the viewing area was absolutely unbelievable. Next to those machines, our two Harleys looked like old ladies bikes. Well, to each its own – I still prefer to cruise and take in the elements and the scenery, rather than fly over the road at lightning speed.

Since the Faugheen road was closed for pre-qualifications, we got stuck at the race for quite some time, and only managed to escape when they stopped to let the medevac helicopter land to pick up one of the racers who got too carried away on a sharp bend… Our exit wasn’t through a gift shop – we sneaked out through the old town’s cemetery, and hurried direction coast.

It was Saturday night, and finding accommodation turned out to be a problem. Neither in Dungarvan, nor in Cork were there any hotel or B&B rooms to be had. None at all. Apparently, with the tightening of drunk driving laws, and subsequent closing of many country pubs, country folk flock to cities for the weekend, happily spending money in their hotels and watering holes. Cork left us especially disgusted, for by the time we made it there, the city’s tourist information offices were all closed, and the only thing left was a computerized system, proudly displayed in the window of one of them, aimed at helping tired travelers find accommodation. The system froze and hung up on us within the first 3 minutes, and all our attempts to resuscitate it proved fruitless…

Armed with our trusty Lonely Planet, we sat on the side of the road, and diligently phoned what seemed to be every hotel and bed & breakfast in the area. They were all full… The Irish luck was with us, though – the last number we dialed answered after a long silence, and although the place was full, the owner recommended another place nearby, giving us the telephone number and the proprietor’s name. We called, and secured what seemed to be the last available room on the Southern Coast of Ireland. In Kinsale. This meant that we had one more hour of riding to do, but that tomorrow we can start right on The Wild Atlantic Way without any detours!

By half past ten in the evening, after 278 km on the road, tired, edgy and hungry we made it to The Waterside House bed & breakfast in Kinsale. The kind owner not only showed us to our room, but also gave a lift to the pub, phoning them in advance and asking not to close the kitchen. Fish & chips, mussels and Guinness were all balm to our hungry and fatigued souls, and after a hearty dinner and a quick taxi ride back we turned in for the night. One down, 7 more days to go!