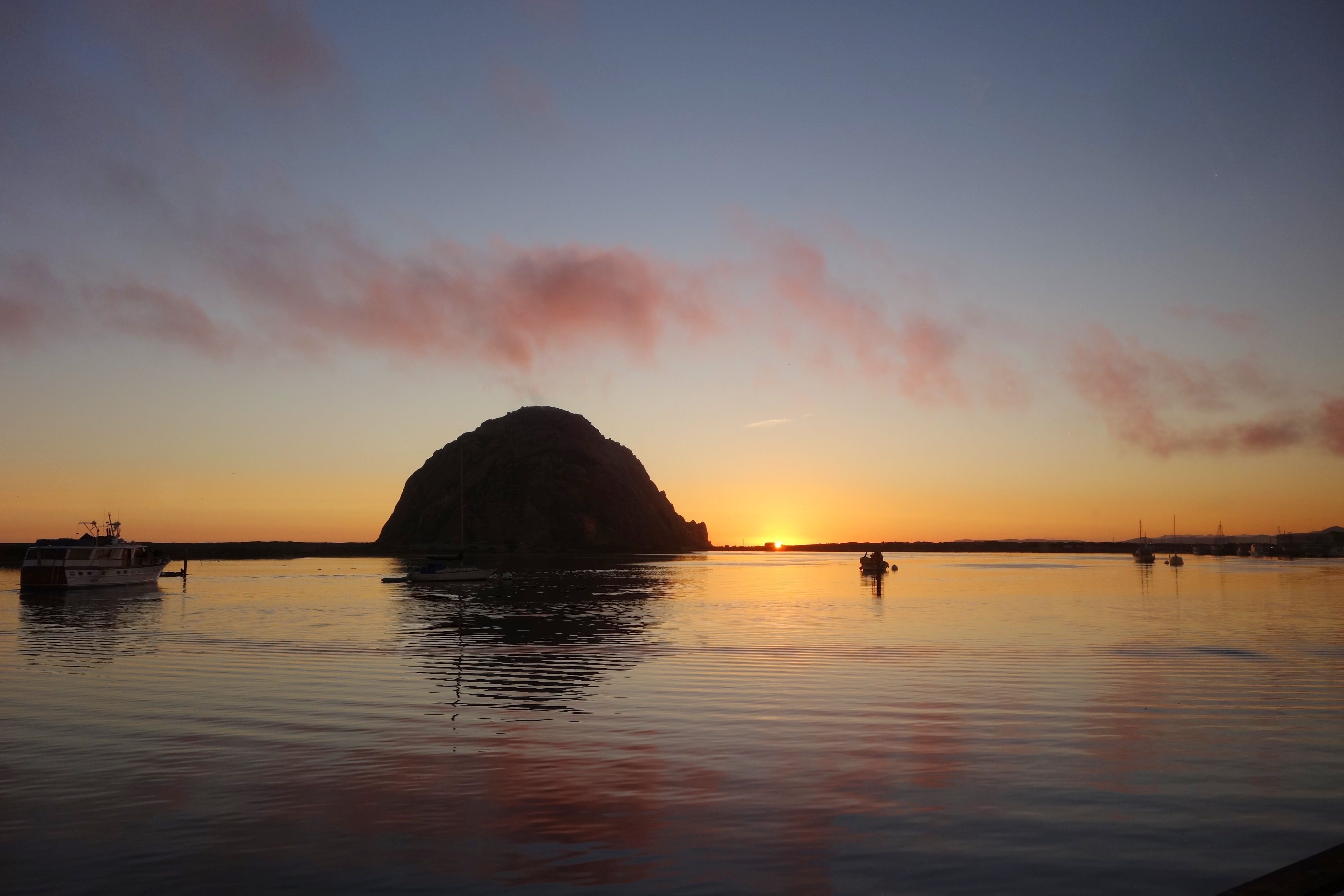 After our triumphant ride down the Golden Gate Bridge (or is it up? Bridges always confuse me with directions prepositions…) we continued moving steadily South. The sore shoulders and tired asses of only two days before were quickly and ultimately forgotten and we were happy to be back on the bikes. The 7th day of the trip was not remembered by much – guess we must have set back into the road trip mode. For some reason the only thing that stuck in memory was the huge thickets of dill (what the fuck???…) on the curbside. For miles we were riding through these unexpected herbal wilds, surprised at the whole out-of-placedness and sheer size of the plants on both sides of the road. I was desperately trying to remember whether Northern California had any particular culinary or botanical claim on this particular herb that would explain and justify its presence on the curb side. Alas, to no avail – the mystery of dill remained forever unsolved…

The stop for the following night was planned at an ocean-side town of Morro Bay, known for a big-ass rock sticking out of the waters right in the middle of said bay.

This was where I stayed for the night on my first ever solo road trip from LA to San Francisco and back some 8 years ago, and I kept fond memories of the place. I remembered the rock, the sea lions on the pier, and huge seagulls savagely watching people with any kind of food in their possession by the ocean-side. The repeat visit to Morro Bay did not disappoint – the rock was as big as I remembered it, and lit by the evening sun setting into the unbelievably calm waters of the bay, it presented itself in the best possible setting. The sea lions must have been away for the holidays, but the seagulls were there all right. Huge birds the size of teenage turkeys, with watchful eyes and viciously yellow beaks were following people around just as I remembered. The presence of fishing boats, busily unloading their catch at the piers on the one hand explained the birds’ presence, but on the other made one wonder at their urbanization: instead of trying their luck with the more natural “catch of the day“, the birds were obviously more comfortable chasing after people with hot dogs and burgers in the hope of leftovers.

One mean-looking bird sat outside of the big glass window of the restaurant right opposite Nic throughout our dinner, watching every bite he eat like a bean-counting auditor. By the look on the bird’s face you would think that it was worried about being stuck with the check in the end of the meal!… I could not resist taking a photo of the two of them, sharing (if only unwillingly on Nic’s part) this ocean-side dinner.

The stretch of Highway 1 between San Francisco and Los Angeles is one of most picturesque and curvy on the whole route. Wide sweeping curves (and none of those tight shitty bends!), beautiful ocean stretching on your right, high blue skies with only an occasional cloud – all presented a perfect setting for a road trip of a lifetime.

Despite (or maybe because of) all this beauty, our ride next day turned out to be surprisingly quick – before we knew it, we were closing in on LA. The signs were unmistakable – even if we tried to pretend we were on the other side of the planet, LA was ready to jump into our faces. Somewhere around Malibu we spotted a petite woman in a white mini sports outfit jogging along the side of the road. She was hard to miss – the boobs fitted onto her tiny frame by some plastic surgeon genius were calling for attention! The woman was jogging to the best of her abilities, but the boobs did not move an inch. She was carrying them in front of her, like a rare prize they were, and the whole spectacle was calling for an applause from every passing motorist. Nic was riding in front of me, so full of emotions I had to honk to him the “Have you seen this?!!!” message, only to be reassured by the wide-eyed glance back transmitting something along the lines of “Are you fucking kidding me? I should have been blind to miss THAT!…” As always, Los Angeles greeted us in style!

LA is not a real city, but more like a studio with a city attached – an appendix that grew out of proportion and metastasized into the valleys and hills around the studio. I am sure there are thousands of people in LA not connected to the movie business at all, yet everybody is permanently talking about movies. And I mean – everybody and permanently. The conversations happening between road construction workers on the curb side, hip executives in trendy bars, as well as hobos on the Venice boardwalk are all circling around the same subject – movies. Every sane person goes to every film premiere, considers it a matter of self-respect to keep abreast of the latest Hollywood gossip, and has a screenplay in the drawer, ready to be turned into the next blockbuster.

Even so, I have always liked the place. True, the downtown is as ugly and nondescript as they come, and Rodeo Drive with its predominantly Arab and Russian clientele must be one of the most fake and depressing places on Earth, but LA can also boast such gems as Venice and Santa Monica. This is where I mostly hung around during my previous visits, and these were the areas that made me love LA, not despite, but because of their craziness. Both towns that long ago merged into the studio/city organism, preserved their authentic flairs – one of shabby chick alternative hippiness, and the other of straight and groomed oasis surrounded by chaos. Once a birthplace of body-building craze, Venice has now settled into a less intense, not-give-a-shit mode. It’s here that you can see people animatedly arguing with themselves on the streets, accompanied by a pet poodle dyed periwinkle blue to match the shade of the favorite suit of the day. Venice can boast the most colorful and verbal homeless, the most original street artists, the most eccentric coffee shop owners and hairdressers, and with this motley crew of extravagant nutters it rightfully claims to be one of the few natural reserves where the crazies flock to nest.

We planned two stops in LA – before and after going into the desert. And we even had a date for the first one – Nika! Born in Moscow, raised in London, Nika was my accidental flat mate in Munich the first year I moved there. Her father was being treated in the local hospital, and Nika came to help and watch over him. We became good friends, and even though her stay in Munich was not long, we kept in touch after she went back to London, to her successful theater acting career. Deep inside Nika‘s delicate frame is a nuclear-engined will of unsurpassed power, and once her eyes were set on Hollywood, it was only a matter of months till Nika packed up her life and moved to la-la-land. Somehow, we never managed to see each other while still on the same continent, but we were fully inclined to make it happen in America. And we finally did!

Nika was just as I remembered her 5 years ago – stunningly beautiful, with a glass of red wine, she was waiting for us at the agreed spot in West Hollywood. Finally a reunion!!! Again, like with Olga, the five years seemed to never have happened, and we picked up right where we left off. The first couple of hours was spent catching up on news and red wine. The name of the bar – “Loaded” – was pretty indicative of what the evening was swiftly unfolding into.

The life that Nika packed and moved onto the new continent included Andy – a partner in life, crime and theater, who dropped a successful directing career in London, and followed Nika across the world. None of us was surprised – had you known Nika, you would have followed her to the moon!… Much as we heard about Andy, we never had the pleasure of meeting in person. Which we finally did, in LA underground of all places.

Los Angeles has a peculiar public transport system, or rather, lack thereof. You see a random city bus every now and then, but you are much better off relying on your own wheels. Nevertheless, the three and a half underground lines cross the studio-city at seemingly random places, and represent a surprisingly cheap and comfortable means of transportation (that is, if you happen to be going where the lines are laid). Nika assured us that the underground was empty, for none of the locals would be caught dead using it, and the tourists simply did not know about its existence. All turned out to be true – the only passengers riding the train were our well lubricated trio, and a tall guy in a hat, solemnly listening to our semi-drunk giggles (“Loaded” was not called so for nothing!…) Just when I was about to point him out as one of the local crazies, he broke into a wide smile and introduced himself as Andy. We hurried forward with hugs and greetings, and the reunion was finally complete.

The rest of the evening spiraled out of control in a swift whirlwind of events: joined by Nika‘s friend Kevin, we continued with designer Chinese food in a fantastic place, more drinks, and by midnight landed at an opening of a trash metal club, where the all-girls band dressed in full-body net stockings was performing on stage in between doing shots with guests. What can I say? Only in LA!… Exhausted, and driven by the sense of duty (we were on schedule, and it dictated that the next day we were supposed to do close to 300 miles into the Mojave Desert), we finally tore ourselves away from Nika, Andy and Kevin, fell into a taxi, and made it back to the hotel.

Turned out, we missed all the fun. The opening party went till the early hours of the morning, one of the performers (by the name of Isabel – I shit you not!) ended up on top of the roof, Andy was trying to talk philosophy with her, and for some reason got fake arrested by the cops who arrived at the scene. To his delight they put him in the driver’s (!!!) seat of a police cruiser, where Andy immediately started pushing the buttons hoping to turn on the siren. After a strict reprimand from officers Nunez and Clark, he spent the next half hour peacefully discussing police brutality in the U.S. with them. Isabel got off the roof eventually, all by herself. Not a single witness was hurt in the making of this perfect evening. Respect, LA – you surpassed yourself!