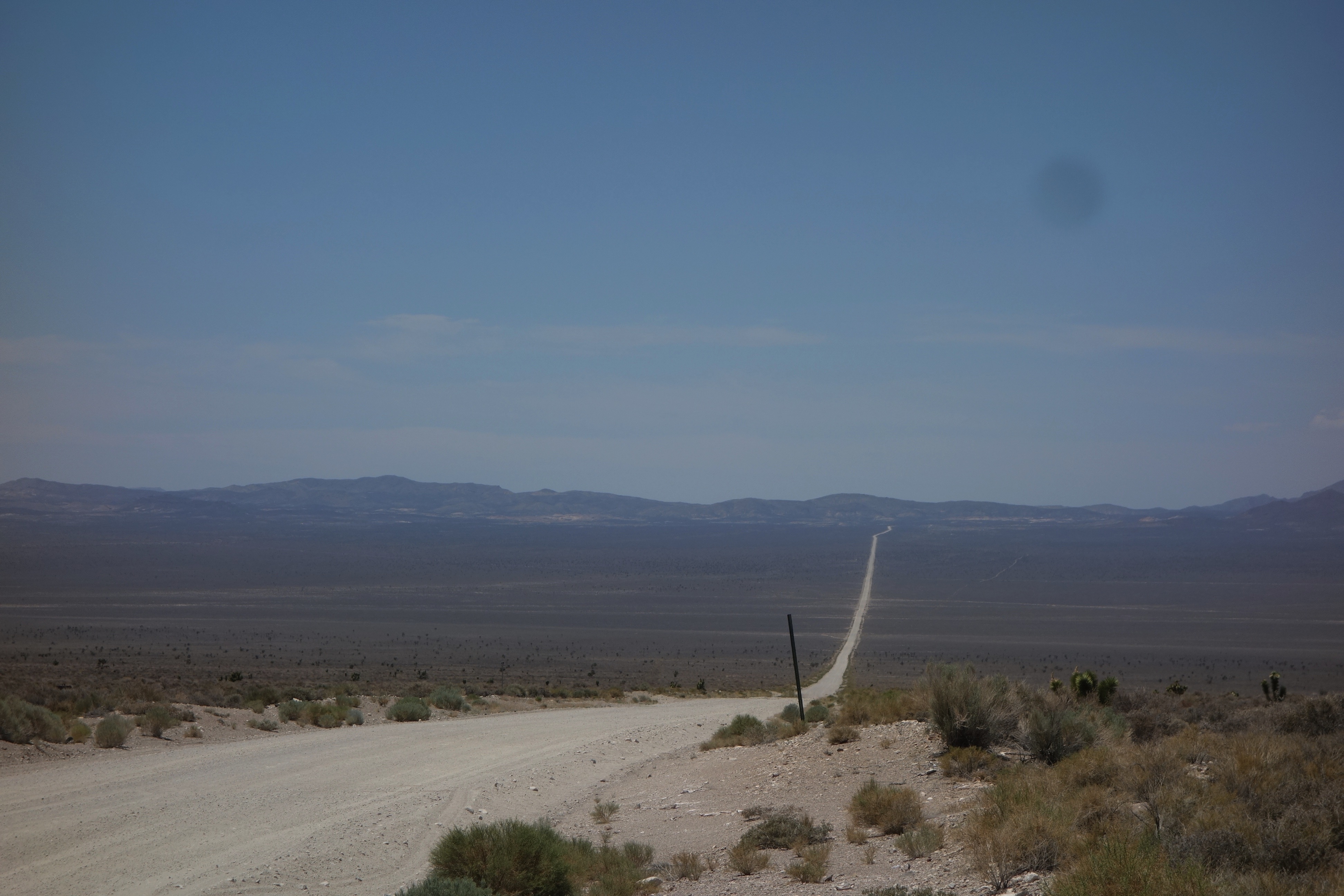 Ok, I have to admit – riding into the desert on air cooled bikes in midday heat was definitely NOT the smartest move on our part. In our defense – the initially planned early start was delayed by the opening of a trash metal club the night before, and we rolled out of LA much later than intended.

We suspected that it would be hot in the desert. Probably even very hot. But just like it’s almost impossible to pack for a beach vacation in the middle of a snowstorm, our brains did not quite got around the whole heat thing.
Normally, on a bike, even in hot weather, you still count in the wind-chill factor. Guess what?… In the desert there is no such thing – only the heat wave factor, which together with the swelter of the sun from the cloudless sky and the heat of the melting tarmac makes you feel like a hot dog on a roaster.

While I kept exceptionally fond memories of the Mojave Desert from the visit of only three years before, even I had to admit that the stretch between LA and Vegas was downright ugly. There was nothing there but the highway. The few random gas stations on the way did not add much charm to the place. Riding through the desert in the vicinity of Death Valley with its average July temperatures of +46C (~116F) was a challenge not for the feeble-hearted. We stopped whenever we could (not that there was an abundance of places anyway), drinking Gatorade and water by the gallon, as well as pouring the latter fluid all over us, and still by the time we reached Vegas I almost collapsed in the driveway of the first hotel on the Strip, as close to the heat stroke as I hopefully would ever be in my life. Thank you, two unknown guys in a golf cart, who stopped and gave me little bottles of cold water, and a pack of ice! Had it not been for them, I may not be having the pleasure of writing these lines… Nic towed my bike to the nearby staff parking, and I was sitting panting in the shade of some meager shrubs by the road, thinking how the hell I got into this mess. While ice and water helped with the initial dizziness, and I soon stopped seeing double, the ride to Vegas made us seriously re-consider our further moves.

The original plan was to continue into the desert on the bikes, stay for the night in Alamo, Nevada, spend the next day exploring the wacky UFO sights of Rachel and Area 51 and return to Vegas passing by the Hoover Dam for a longer stay two nights later. After our close and personal encounter with the desert heat, all of this was out of the question. It was simply too hot to ride… Exhausted and heat-stricken as we were, we weren’t ready to throw in the towel just yet. Two luckily spotted passers buy in Harley T-shirts gave us directions to the nearest dealer who happened to be just around the corner. We dragged our sorry asses and bikes there, and supported by free coffee in an air-conditioned atmosphere resuscitated and regrouped.

Not ready to discard a full day of carefully planned alternative sight-seeing, we decided to sacrifice on the riding. The bikes were left resting at the Vegas Harley dealer’s – thank you, guys – the Harley code of honor did work, and “riders in distress” (aka stupid idiots who thought they would be OK riding into the desert in mid-summer heat) were helped. The rental car equipped with GPS and air conditioning was booked and picked up at the airport around the corner from Harley, our rucksacks were thrown in, and smug and proud of our crisis management skills we were back on the road!

From inside the air-conditioned vehicle the desert looked tame and pretty. Following the instructions of the GPS lady and snapping photos on the way, we reached the Windmill Ridge – our destination for the night. I fondly remembered the place with its beautiful super-comfort cabins and the out-of-this-world steaks from the last visit to Nevada, and insisted we stopped there again. The Windmill Ridge did not disappoint – both, the cabins and the steaks were as fantastic as I remembered them, and I can wholeheartedly vouch that the state of Nevada is worth visiting just for that!

The next day we drove along Extraterrestrial Highway, noticing with surprise how most road-signs indicating the free range area and low flying aircraft were punctured with bullet-holes. This included the couple of those famously adjusted to the specifics of the area, where the cow was complemented with UFO flying over it. Entertainment in the desert must be rather basic and scarce…

We stopped at the Little A’Le’Inn for a drink, a chat with the owner, and an obligatory tour of the gift shop, and took about a hundred pictures with the meager but epic sights of Rachel, thoroughly enjoying ourselves. The place was like a time-capsule: returning there three years after my first visit, I had a total de ja vue of having left it in exactly the same state only yesterday! I won’t repeat here my first-time impressions from Rachel of three years ago – those who somehow managed to miss them, are welcome to refresh their memories here: Mad Christmas Trip – Rachel, Nevada.

Three years later, I was glad to confirm that the general level of craziness did not go down even a notch. The only unfortunate change to the neighborhood was the disappearance of the Black Mailbox (again, the curious-minded can read about this artifact here:
Mad Christmas Trip – Rachel, Nevada.

The owner of the Little A’Le’Inn confirmed to us that, alas, Black Mailbox there was no more!… Apparently, even after the replacement of the original box with an industrial-size and -strength construction, mail heists continued. Mr. Medlin said “Screw this shit!” (or something along those lines), plucked the box out, and re-routed his mail to the nearby Alamo, where his granddaughter now picks it up every day when going to school. Sad, but inevitable… One more legendary landmark succumbed to the bulldozer of time. We still commemorated the occasion by taking photos at the now empty spot where Black Mailbox used to be.

The next day, before returning the car and our rested in the luxury of air-conditioning asses to Vegas, we had one more sight on the agenda – the Hoover Dam. Built in the 30-ies of the 20th century, the Dam is one of the seven modern civil engineering wonders of the United States, and quite rightly so. Even today, it looks incredibly impressive, and considering the technology of 80 years ago, one cannot but wonder how the heck they built the thing, especially in the limited time they had for the job. Blocking the estuary of the Colorado River at Lake Mead, the Dam is huge – definitely too big to fit into a photo – and supplies electrical power to the whole states of Nevada and Arizona, as well as Southern California.

With the Bypass Bridge connecting Nevada and Arizona above it and numerous electric wire towers sticking out of both banks of the river, the whole construction looks impressively futuristic. The incredible green waters of the lake and the Colorado River sets off the color scheme of the area, with the carmine red of the mountains, ochre yellow of the Dam buildings, and the unbelievably blue desert sky. No wonder that millions of people visit the Hoover Dam every year – it is a magnificent sight! And yes, I am aware of the whole eco system of Lake Mead and surrounding area being shot to shit, but from the engineering point of view, the Hoover Dam is still a wonder.