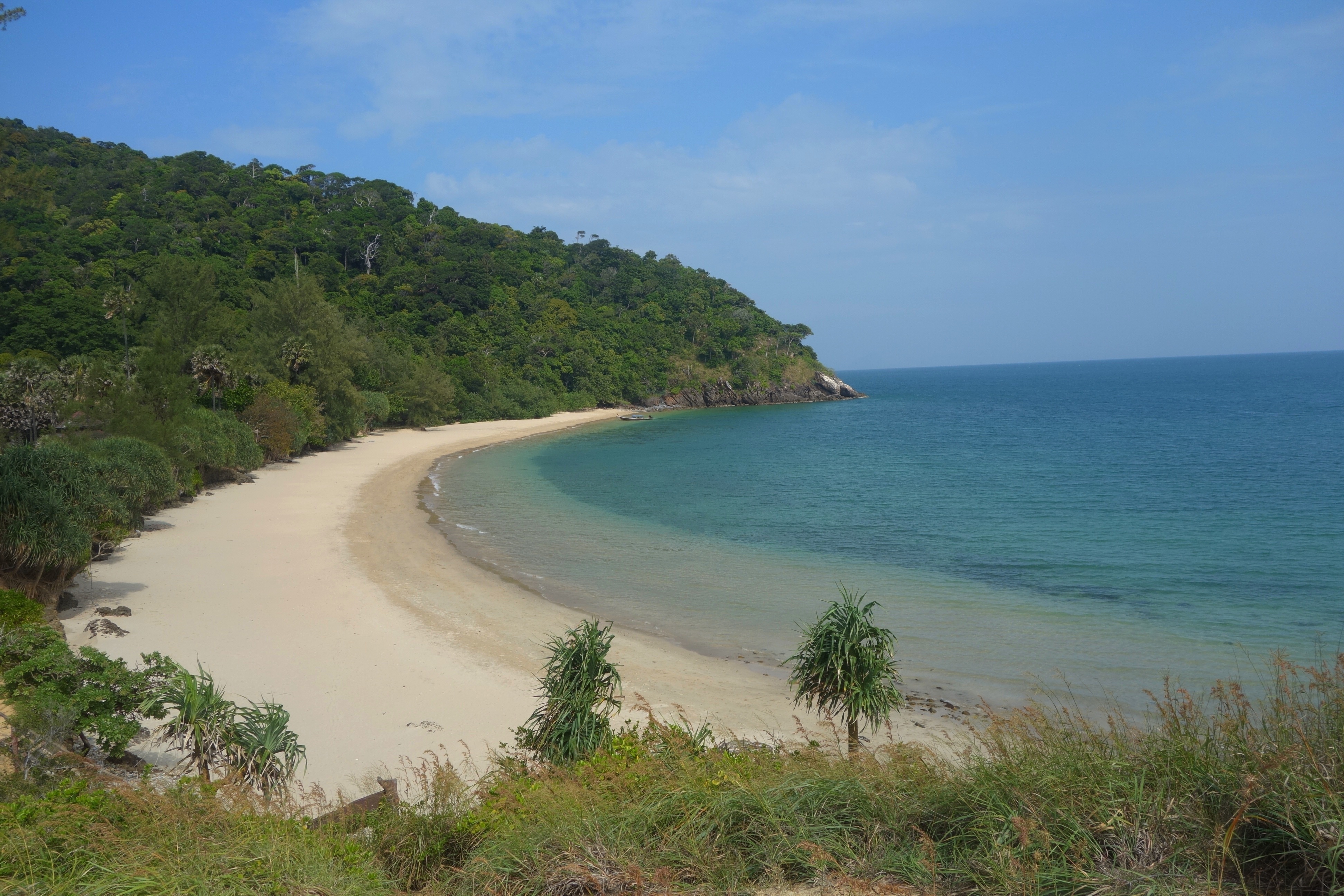 Ko Lanta did not disappoint one bit: white sands, blue sea, huts on the beach, palms and coconuts, and other friendly exotics. Tourists were present, but without excess. Historic compatriots were nowhere to be seen, and most people around were of Scandinavian-German origin. There was no rampage, nobody got loudly or obnoxiously drunk, the percentage of kids was tolerable, and we were quite happy with our temporary place of residence.

The most popular representatives of the island fauna turned out to be cats. They were everywhere – of all sizes, colors and ages, very sociable and chatty, cats were sitting on benches, lawns and verandas, swinging in hammocks, and following you everywhere you went. True to their nature, they behaved as if they owned the island.

Upon closer inspection, our bungalow happened to be equipped with a resident pet – a frog. It appeared in the corner of the shower every evening on the dot, despite the fact that we escorted it off the premises on the lid of the paper bin with matching consistency every night. The frog did not protest, did not make any inappropriate sounds, and generally exhibited quite dignified, although rather persistent behavior.

Alas, not all local fauna was as friendly as cats, or as easy-going as the frog. My tender soul was deeply offended by a local tropical cockroach (a big fella with long wings and serious-looking antennas). He decided to welcome new residents, choosing my very personal toothbrush as a podium for his house-warming greeting. With a loud shriek of disgust that could compete with any trademarked Tarzan yell, and that is undoubtedly remembered to this day by all neighbors woken up in the middle of the night, the unwelcome insect was flushed down the toilet, and the toothbrush was replaced with a new one in the morning. The cockroach family did not come to avenge the drowned relative, but from that moment not a single trip to the bathroom, regardless of the time of day or general consciousness, was done without glasses and a torch.

We spent the first day soaking in the sun on the beach, and strayed away only in the evening to check out the local Irish pub, which did not leave any impressions whatsoever.

On the second day, we rented a scooter with a positive-looking Mickey Mouse sticker on the license plate (which helped to distinguish our vehicle from hundreds of others parked all over the place), and armed with a map decided to ride around the island. Shaped as an eggplant stretching from the North to the South (which turned out to be especially handy in admiring the sunsets, as most huts/bungalows/hotels are located on its Western side), Ko Lanta had two roads on offer – one running along the East coast, the other one parallel to the West coast. For everybody’s convenience, these two roads meet only on the northern tip of the island. Two more roads cross Ko Lanta perpendicularly in the center, and this sums up the general topography of the island.

Even though Ko Lanta is a relatively big island by local standards, covering the total of 80 square kilometers (~31 square miles), it did not have too many sights on offer. The map marked a lighthouse, a cave, a waterfall, and Ko Lanta Old Town. Our first expedition on Mickey was to the Old Town of Ko Lanta – a fishing village of one and a half streets on the opposite side of the island. Apart from the restaurant in the mangrove forest on the waterfront with a majestic sight of the turquoise waters of the bay and nearby little islands the village did not leave many impressions.

The scooter motocross around the island was quite tricky, as some of the dirt roads we conquered ran along the hills with a 19% degree angle. We got the hang of steering our “mighty steed” through those pretty quickly, though.

The following day we ventured out to the northern tip of the island, tempted by the map’s promise of a lighthouse. Mickey did his best, but at times was panting out of breath. The waterfall, marked on the map, was supposed to be on the way to the lighthouse, so our plan was to visit both, leaving the cave for later.

The lighthouse has seen better days, but was situated in a place of exceptional beauty: the bay with turquoise waters and white sand at the backdrop of rocks, with monkeys, sunning themselves in the trees, and minimal human presence, as the tip of island turned out to be a national park with paid entrance.

The waterfall was nowhere to be found. And not due to the lack of persistence on our part… We drove around the area it was supposed to be at several times, but could not spot anything even remotely resembling any water reservoirs… After further questioning of the locals, it turned out that the waterfall was rather nominal, and grew from the tiny stream to something more or less visible only during the rain season.

However, while searching for the waterfall, we stumbled upon the cave. The road, that looked more like a goat path, ended with a big private house, on the porch of which a bored-looking girl was selling entry tickets to “the sight”. The ticket included a guide, in the face of the girl’s brother/nephew/cousin. While waiting for the guide to show up, we were joined by an English couple – a quiet guy and a girl with a huge bag over her shoulder. They, too, conquered the goat path on a scooter, and together with them and the guide, armed with headlights, we moved in the direction of the cave. The path was long, barely visible, winding and curvy, and ran through the tree roots, impenetrable thick growth, ice-cold creeks, and looked like it could have been trodden through the jungle by hedgehogs. Our guide was young, friendly and smiley, with the English fluency of an average Russian tourist – he could say “yes” and “no“, and used them absolutely interchangeably.

In about 20 minutes we reached the cave. Our guide distributed the headlights, and crawled inside the cave. For some reason, I was under the impression that the cave visit would be done from outside…. Hmmm… Nevertheless, everybody followed the guide inside – the whole gang in flip-flops and shorts, the English girl all the way hauling along the bag, that judging by the size of it contained the kitchen sink in addition to everything but. At first everything went well, and we moved quite quick – the family, capitalizing on the cave, not only sold entry tickets, and tread the hedgehog path to the entrance, but also installed wooden ladders for getting inside. The ladders were sturdy, and the ceilings of the cave high. This did not last long, though. At the first turn of the cave, our guide got on all fours, and sneaked into a tunnel the size of a rat hole. We had no other way but to follow suit.

The rest of the way it was not even worth getting up. In a couple of places the walls of the tunnel cardinally narrowed down, making us doubt the general “walkability” of the path. The fact that our guide fit into them did not mean shit, for like most Thai teenagers he was very slim and exceptionally flexible. An average American or a Russian tourist would have gotten stuck already in the first turn of the rat hole. Which made us wonder whether any refunds were offered to those visitors who did not fit into the cave. Or maybe there was a weight control at the entrance, and those who visually did not fit the required norm, were simply refused tickets?…

Covered in clay and dirt and generously sprinkled with dust and sand, we squeezed out of the cave labyrinth (thanks to the guide and headlights), and in thickening twilight moved through the jungle in the direction of Mickey. The whole excursion was definitely a “once in a lifetime experience“, in the sense that it definitely won’t call for a repeat visit.