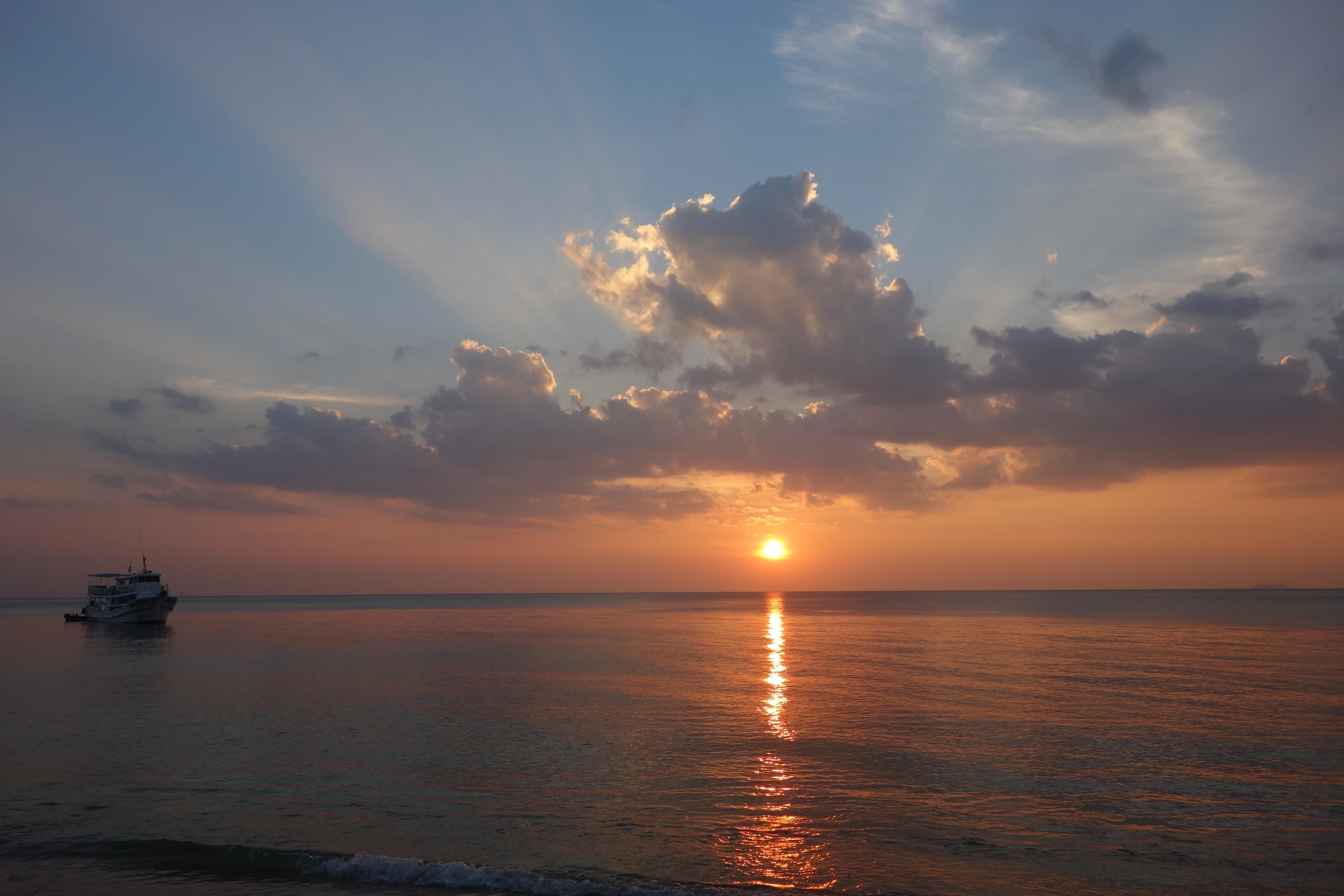 Due to its location and transportation connections, the town of Krabi is a good transit point between mainland Thailand and the country’s numerous islands. Thanks to the passing nature of its tourism, the town managed to not get overrun by the hordes of people in flip-flops and shorts with cameras. However, it could not boast any real sights apart from the airport and the market either.

Krabi was our first experiment on finding accommodation without any preliminary plans. Here’s how the game is played: upon arrival at your destination, get a tuk-tuk, and tell the driver the name of the hotel downtown, or any area you want to be (all the names and locations are sourced from the bottomless well of travel knowledge of the “Lonely Planet” guides), or simply point your finger into the map. One of the participants of the adventure accompanied by all luggage sits down in the nearest café/bar with coffee/juice/beer/wine according to tastes, and the others embark on a scouting mission of the surroundings. Depending on the size of the area, this can be done on foot (e.g. in Krabi), or on a scooter rented nearby (e.g. on the islands). The systems works, and throughout our journey did not disappoint us once. Within a period of time ranging from ten minutes to a couple of hours you are guaranteed to find quality accommodation, and without any Internet scams (when you book five-star luxury lodgings online, and end up in a run-down hut with a mattress on the floor and outdoor facilities).

Our accommodation in Krabi was a newly opened “Grandmom Place“. Grandmom was smiling and personally welcoming guests at Reception. The only minus of our brand-new and spotlessly clean digs with a hot shower(!) was their location on the 5th floor without a lift. Which did not stop us from hauling our shit upstairs, and enjoying a long hot shower.

Due to the day spent on the road, and a late afternoon arrival, the only sight we managed to see in Krabi was the night market. It is a sort of a spontaneous people’s restaurant, when all food carts from all over town gather together in the afternoon on the embankment. They put out plastic tables and chairs, surround the perimeter with colorful lights, and offer everything imaginable on the planet: from classical coconut soups and noodles/rice to freshly caught fish, squid and other grilled seafood delicacies. A total culinary delight, our applause, and other ways of supporting local small business!

A miniature travel agency, tucked in an alley around the corner from Grandmom’s Place booked us transfer and tickets to the ferry that would take us next morning to the island of Ko Lanta. Although, the correct way of saying would be “to the island of Lanta”, since “Ko” in Thai means “island” per se. Based on the information found in travel guides, Internet and supported by hearsay, the island promised to be beautiful, relatively civilized, and not too overrun by tourists. Our transfer to the ferry showed up an hour later than promised, and turned out to be an open pick-up truck, already carrying 4 passengers picked up all over the hotels in the area. We joined the crew and climbed on, sitting on our luggage in the open back of the truck, which turned out to be quite efficient. Having collected five more fellow travelers in the area and packed them on top of us, the driver finally headed to the pier.

Somewhere in the middle of the way, having reached a particularly desolate stretch of the road, he stopped without any warning, switched off the engine, and headed for the bushes, unzipping his trousers in a business-like manner of a person who did not have a moment to waste. While the driver was taking his time in the bushes, a friendly-looking local emerged from behind a nearby tree. He had a wide toothless grin, and carried an axe, waving it in one hand in a rather worrying manner, all the time moving slowly in our direction. Luckily, the driver finished his business before we had a chance to make a closer acquaintance with a friendly axe-waving aborigine. Probably for the better…

Ferries between mainland and numerous Thai islands run regularly, do not cost much (something around 10 euros a head for a 2-hour journey), and are represented by boats of all forms, speeds, shapes and ages. Passengers and luggage get loaded on board (backpacks and suitcases are thrown into the depths of the boat, with remaining ones piled on deck), passengers randomly distribute all over the deck, and the boats head busily to their destinations, offering passengers water, beer and chips at handy prices. It all looks extremely chaotic, but these mini-arcs, loaded to the brim with tourists and backpacks, move around in a very efficient manner, transferring passengers into smaller boats in places lacking piers.

Transit passengers also change boats and ferries in open waters. A ferry slows down, other ones, or a random assortment of long boats move closer to it, the crew throws the luggage aboard a new vessel, passengers jump from one boat to the other (many are not stopped from this acrobatics even by crutches or casts on various extremities), and the journey continues. These mid-sea transfers look weird, but based on our observations work smoothly, and without any unnecessary traumatic bone-breaking or drowning experiences.

Having fried on the deck for 2 hours, we finally reached the desired island, where our ideas about accommodation were also quite vague. We fought our way through the crowd of tuk-tuk drivers at the pier, and having agreed on the price and name of the destination (the only one the driver managed to recognize from the variety we offered), we continued our journey in a cart, hooked to the side of a moped. At first glance, the island did not impress – we took the main road that theoretically ran along the coast, without getting visually close. Shacks, restaurants, chicken coops, souvenir and laundry shops, as well as plenty of other unwanted signs of civilization were plentiful on both sides of the road – all loud, dirty, and unsightly.

However, turning away from the main road and driving through the back alleys of the chicken coops was enough to enter a totally different scenery: beautiful beaches with white sand and lounge chairs, restaurants with lights in the trees, and exotic-looking palm tree huts on the beach. One of these huts seemed to have been waiting for us in the first place we asked for accommodation at. The place had a big communal veranda/restaurant, the chilled out name of “Somewhere Else“, equally relaxed atmosphere, and very positive references in recently published guidebooks.

Our hut stood right on the beach, had a magnificent view of the ocean, giving us a possibility to admire Ko Lanta’s majestic sunsets from the hammock on our porch every night. All authentic, without the 5-star standardization, exceptionally friendly, and international. Filling out the registry upon arrival (no bureaucratic formalities like passports or credit cards), I could not but marvel at the multi-national variety of neighbors – the English, Swedes, Germans and Finns, in couples and families, along with a stray American, who identified his permanent place of residence as “right here, bungalow number 7“. We were overwhelmed with an immediate and strong desire to join the ranks, and register right here on the beach.

All local bungalow businesses are family-owned, and either incorporate, or cooperate with restaurants, grocery shops and laundry services, simultaneously renting scooters and boats, thus providing package services to all customers. Upon check-in every resident at “Somewhere Else” opened a tab, in a shape of a little black book, maintained by the owner and his family. All expenses for the duration of stay were there, which proved to be extremely handy – no need to pay separately for each cup of tea or portion of noodles – all bills settled upon departure. Despite the relaxed atmosphere and the expected tourist amnesia – all honest with no bullshit. You pay exactly for the food eaten/laundry washed/scooters rented. Prices were ridiculously low: for the five days we spent on the island, including accommodation, transportation in the shape of a scooter with a Mickey Mouse sticker, breakfasts, cocktails, laundry, a couple of dinners and tips, we paid a total of 100 euros for two. Our hut/bungalow was rather basic, but included all the required essentials: a bed with a mosquito net, a toilet and shower en suite. It even had a couple of extras in the shape of a terrace with an ocean view, and a hammock on it.

As a side observation of an anthropological (or, rather health-safety) nature: showers, and especially toilets in Asia are rather peculiar. Starting with the fact, that in case of the presence of a shower, in most cases nothing separates the latter from the rest of the space, and when showering you fill the whole area, covering the toilet, the sink, and the walls with water. If the drainage does not work, or works badly – you are in the shit, and every visit to the toilet will call for gummy boots. For the most part we were lucky, and everything worked, even though to this day I am convinced that showering over the toilet is a weird concept…

The story with toilets is slightly different: using toilet paper for cleansing oneself is not overly popular, and is generally considered barbarian. For cleansing there is water. In a sprinkler on the end of a little hose, paired with every commode. Many toilets in tourist places sprouted clear instructions with pictures, saying not to be afraid of the sprinkler, and explaining how to operate the hose. There is another reason toilet paper is not popular: the local sewage system is quite old, and the pipes get easily clogged, inconveniencing everybody around. In every toilet around the country one can see official-looking warnings not to throw toilet paper where it does not belong. Every place has a little bucket in the corner, and toilet paper (if present at all), is meant not for cleansing, but for drying oneself. Having hosed the required parts of the anatomy with water (which is not as easy as it sounds, as the first attempts to use the hose lead to spraying yourself from head to toe and everything around you), patrons are expected to dry their privates with paper, and place the latter in the bucket.

In more rural areas a nice porcelain commode is mainly there to please the eye, as the internal flush mechanism does not work. Instead, every toilet is equipped with a bucket of water and a saucepan, with which you are expected to flush down the “fruits of your labor.” All this said, the hose with a sprinkler will be present in even the shittiest and dirtiest of toilets in backwater villages.

All available systems are quite unusual, and I generally came to the conclusion, that my personal preferences lean towards a localized shower that does not spray the surrounding area, and a toilet able to accommodate toilet paper, no matter how barbarian it might seem in South-East Asia. One more proof of the common banality that to each its own…