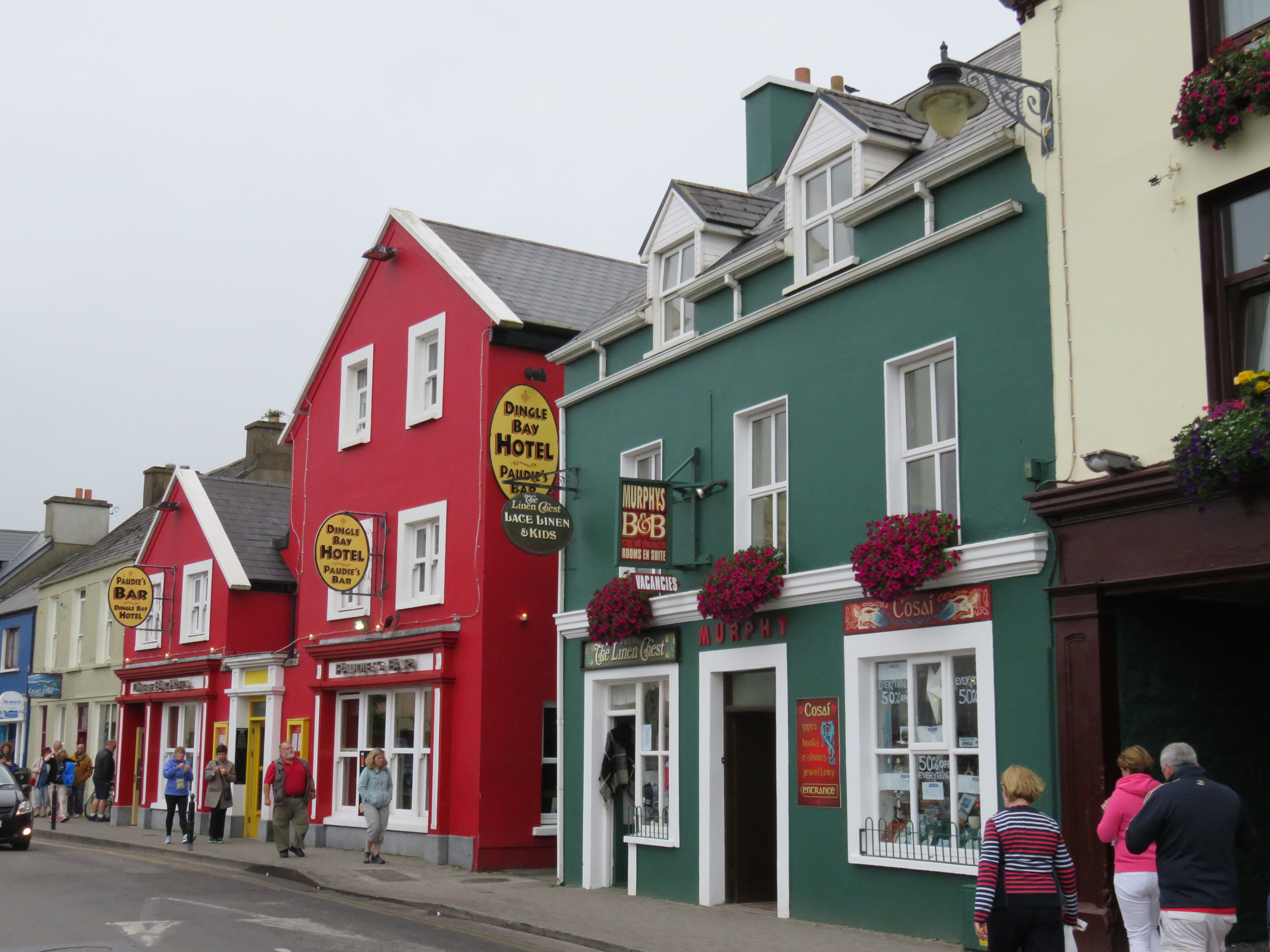 The next day started out positively fine. In the morning, we had a lovely breakfast in The Bank House B&B, said good-bye to our nice hosts, and were on our way.

The sky looked grayish, but it was dry, and after last day’s adventures we were positive that the worse was behind us. The stretch of the Wild Atlantic Way between Sneem and Caherdaniel promised breathtaking views of the Kenmare Bay, and an easy and relaxed ride. We were all up for that! After yesterday’s Eyeries mishap, how much worse could it possibly get?!… Guess what?… The Murphy’s Law was definitely on our side, and made sure we lived up to the name. Well, to be fair, it really did NOT get worse than the goat paths, but the day held adventures of its own…

Within an hour of leaving Sneem, we rode into a dense wall of fog that was getting thicker by the minute. We slowed down to a crawling speed, as seeing anything further than 2 meters ahead was simply impossible. The fog was so thick, it was almost possible to grab and make fog-balls to throw at each other! It also clung on to our clothes, creeping into every millimeter between our rain gear and skin, under gloves and helmets, making us feel like we were riding in some thick white soup. Slightly watered-down French onion, or cream of mushroom, maybe… We snailed on, trying to make the road and not run into any cyclists. For some reason the density of nutters on 2 wheels with no engines dramatically increased just on that day. Was it that much fun cycling in soup?… Needless to say, none of them had any lights on, and hard as they tried to keep as close to the side of the road as the mountains and the road markings (or absence thereof) would permit, their chances of survival seemed to be pretty slim.

Road construction works just added to the fun – in most places the 2-lane road was narrowed down to one lane, while the other one was being covered with fresh tarmac. No road markings or lights could be seen on either lane. Huge road-construction vehicles crawled in front of long queues of cars, bikes, horse-drawn carriages, and what else, causing horrible, snail-paced traffic jams, before gracefully and noisily parking at a dangerous angle on the side of the road facing the cliffs. We barely covered 20 km in 2 hours, and for fear of irrevocably damaging our nervous systems by this “riding” any further, had to stop for a cup of hot tea and a dry break.

Two pots of tea (each!), and some quality dry time somewhere near Castlecove in a coffee shop, which name completely escapes me, but which morning choice of beverages are still warmly remembered, and we were ready to dip back into the fog soup. Needless to say, we could forget the views. They were well concealed and hidden from prying eyes. We did not really mind – semi-dry after our pit stop, we were just glad to be alive, and not hit a single cyclist or a road-construction vehicle. The rest of the day’s ride was not overly picturesque, but at least satisfyingly safe – by the end of it we mastered soup-riding quite well!

An interesting bit of road entertainment was encountered around Killorglin – The Wild Atlantic Way ran through a golf course, strategically positioned on both sides of the road. The foggy soup has partially dissolved by then, and golf balls could be clearly seen flying left, right and center, over the utterly bewildered motorists. We ducked, and sped up to avoid yet another road hazard of the day. We looked up the place later – Killorglin Golf Club. Whoever planned the space, obviously did not give a shit about the road cutting it in half, and had even fewer concerns for people driving or riding through it. Hats off to the unknown genius!… However, as crazy golf courses go, Killorglin is nowhere near the Dong Mueang Golf Course in Bangkok, strategically located between Runway 1 and Runway 2 of the old Dong Mueang Airport. The faces of passengers looking out of planes taking over or landing are priceless, and will beat Killorglin motorists any time!…

Our rather rudimentary breakfast planning had Dingle, the main (and only) town on the Dingle Peninsular, as a possible night stop, and fed up with soup and crazy golfers, this was where we were heading to. Fog, or no fog, we did most of that day, and all things considered, were quite proud of ourselves. We were ready for a well-deserved break, and Dingle seemed to be just the right place. We stopped bang in the middle of the marina parking lot, and looked around. There were no second thoughts or hesitations – the welcoming sign of Murphy’s Bar was staring us right in the face. We asked inside, and there were rooms to be had at a very palatable price in a nice little B&B above the bar. Within 10 minutes of arrival into Dingle (our personal record on this trip!), we were the proud owners of a key to a room with an en suite bathroom and shower, the bikes were safely parked in the back of the bar, and we were ready to explore the town.

Not before paying our respects to the lovely establishment that provided our accommodation for the night, though. It was only early afternoon, but the place was full – mostly tourist families with children craving for an early dinner or late lunch. We spotted two seats at the end of the bar, and quickly landed our tired asses there. Within the 5 minutes it took to pour two lovely pints of Guinness, we were best friends with the barmaid. We won her heart by telling her our names were Murphy, yet, we were not sprouting Murphy’s T-shirts, or ordering Murphy’s Stout, or in any other way trying to claim too much of our Irish heritage. Unlike a group she had just a couple of hours earlier – she shared – a family of 5, all dressed and ordering as described above, and trying to sing Irish songs in a heavy Texas accent all at once… It wasn’t really hard to make a good impression after that, I’d say…

A lovely chat and a couple of pints later (isn’t it ironic how it’s never “just one”?…), we made a conscious effort to detach ourselves from the bar, and do some sightseeing before it got dark. This was only a temporary good-bye – we were full of good intentions to return and enjoy some live music before going to bed.

Dingle made a wonderful and lasting impression – colorful houses, windy little streets, and a nice marina. All downtown streets and the harbor were very busy – crowds of tourists were walking around in search of souvenirs, food, drink and general entertainment, and at times we had to elbow our way through the narrow streets. Yet, despite of these swarms of visitors, Dingle did not make an impression of a tourist trap. Somewhere, in the midst of all this mayhem the town managed to preserve its authenticity, and the tourists only enhanced it. Somehow, the local colors, the local humor, and the general atmosphere of a good craic were strong and undeterred.

According to online sources, the town also boasts a resident dolphin called Fungi (don’t ask why). Well, to be geographically correct, the dolphin does not reside in town, but rather in its harbor, and apparently does not come on shore. Visitors can admire his statue in the marina, and some even brave a boat ride in the hope of a personal encounter. We resolved to looking at the statue, and did not venture into the sea.  Our love of dolphins has its limits…

Dingle also got remembered as the place that I finally OD’d on oysters. I have never really been a huge fan, and for some reason definitely did not associate Ireland with seafood. Before coming to the Green Island, Irish cuisine for me was limited to shepherd’s pie, full Irish breakfast, potatoes, and, well… more potatoes. Somehow, the fact that due to it being surrounded by water, fish and seafood should be a-plenty on the island, completely escaped my imagination. In my defense – not only mine. Few people associate Ireland with oyster country, but these seemed to be on the menu of each restaurant, pub and café we passed by. It took a lot of persuading, but eventually I agreed to try them, and after that – there was no stopping me! Whenever we went, the oysters were huge, fresh, almost indecent in their raw nakedness, and beautiful. I had them for dinner for about 4 days in a row, and the plate I got in Dingle in “The Boatyard” restaurant – a very stylish establishment down the road from the Murphy’s – were particularly delicious. They also turned out to be the last straw in my oyster fight. Luckily, I did not know it that evening (the joys of protein overdose were yet to descend on me the following morning), and having wolfed down a dozen (they went down particularly well accompanied by a creamy pint of Guinness), enjoyed myself to the fullest.

Back at the Murphy’s things were seriously kicking in. There were no seats left at the bar, but after some elbowing through to the end of the pub, we secured two standing spots by putting said elbows onto the bar. Thanks to our previously-struck friendship with the barmaid, we were not kicked out. Just the opposite – two beautiful pints of Guinness miraculously appeared in front of us, and with the full feeling of belonging we were ready for the evening to continue. The band was just setting up: two men whose middle ages were well past them, and both in desperate need of some dental work – one passionately stroking the top of an accordion, and the other one fiddling with the microphone. They may not have looked like much, but it all changed the moment they started singling. Like many good Irish bands, they were not professional musicians, and were probably doing some odd jobs by day. But, man, could they play that accordion and sing!… Even more – they were also great at heckling with the audience, and the bar patrons were as impatiently waiting for the breaks, as they were for the songs.

The band played till 1 in the morning, and happy with our authentic Irish experience in a bar with our name above the door, we crawled upstairs for a good night’s sleep.