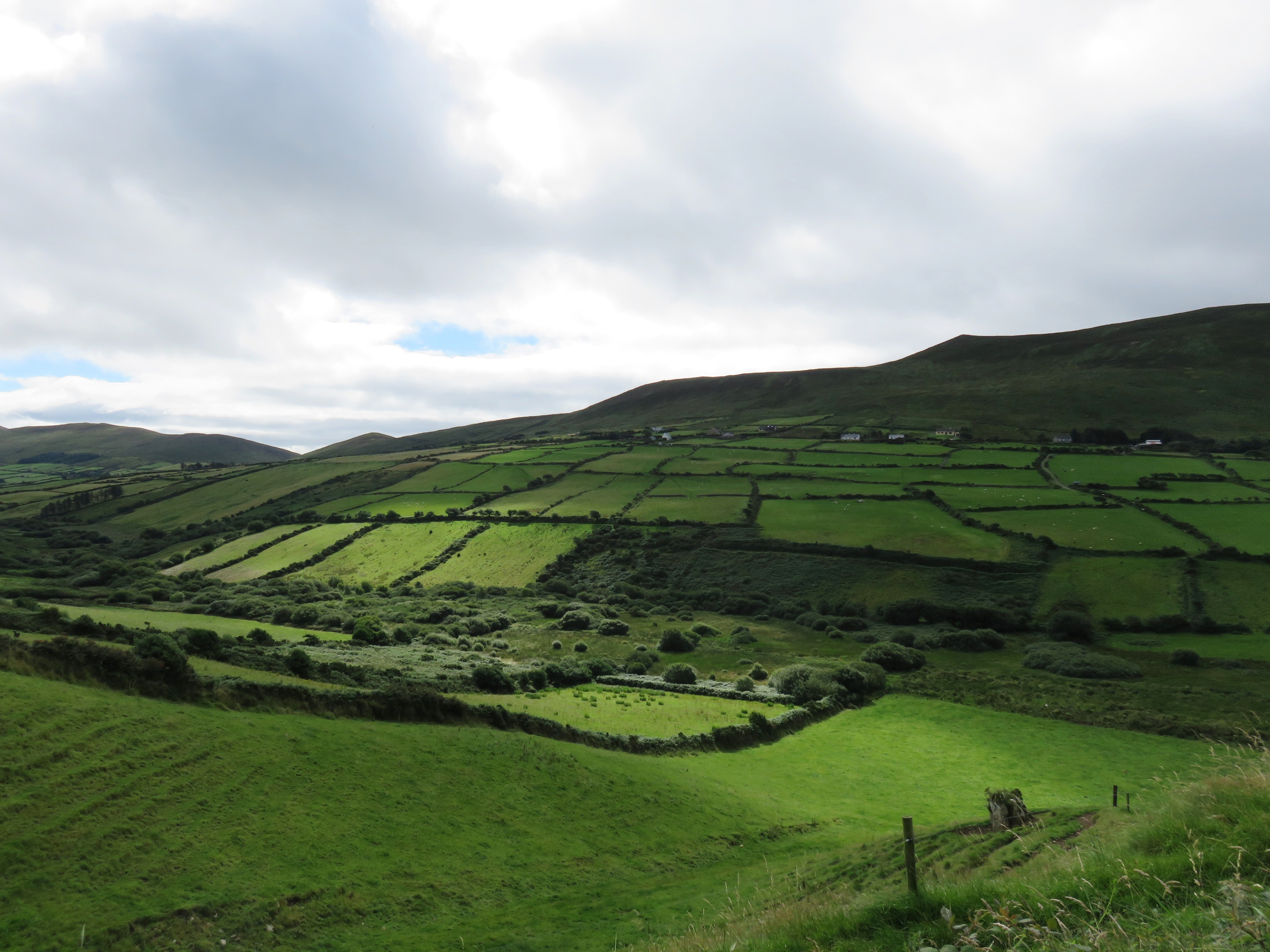 The following morning started bright and early with no severe consequences of a late Guinness night. The air was crisp, the blue skies were glimpsing through the clouds, and the day promised to be dry and gorgeous, if not overly tropical. We started off in high spirits, but after about half an hour on the road the oyster excesses of previous days started catching up with me. No, there was nothing disgusting or outrageous like severe diarrhea, projectile vomiting or any other outwardly unpleasant signs. I just wanted to crawl in under the bike and die. And I could not care less whether this bike was stationary or moving. My head was full of shit, and I felt like there was an alien inside me, trying to rip his way out through my insides. This, probably, was not the best condition to continue riding in, but I sincerely hoped that the fresh air, the cold wind in my face and a change of scenery would help blow the cobwebs away, and calm down the fucking alien. It sort of worked. In a sense that I did not feel any worse staying on the bike, than I did away from it.

Apart from fighting the alien, the most memorable part of that day was driving through cow country. Somewhere between Ballyheigue and Ballyduff, a stretch of road a good 10 km or so long took us through lush green fields, falling into the waters of the bay, that were richly peppered with cows. Of all sort, breeds, colours and sizes, they had one thing in common: farts. Man, could these creatures fart!!!!…. Even through head scarfs and bandanas we used to cover our faces, the smell was overpowering and toxic. And all this in wide open wilderness, where ocean winds blow strong! Needless to say, the alien inside of me was NOT impressed. I tried to hold my breath (which obviously was not possible for longer than a minute or so), nearly chocked on my bandana, had to seriously speed up, and was unbelievably grateful when we put the cows behind us.

Up until then I have always been skeptical about stories that global warming is caused not from the combustion of fossil fuels in cars, factories and electricity production, or gases used for refrigeration and industrial processes, but by excessive cow farming and their farts. The latter did not seem that large-scale to me to have such a global impact on the climate. Guess what?…. I am a convert now! Fucking hell, can they fart!!!…. And if a couple of hundred cows on a field open to all winds of Ireland can do THAT, I seriously don’t want to think what thousands and thousands of their mates grazing on the pastures in Texas and Argentina can produce!

During a brief break in the drizzle, when the sun managed to glimpse through the clouds for the whole 10 minutes, we stopped for photos at a particularly picturesque spot at a place the name of which completely escapes me now. We admired the waves, the scenery and the clouds, while freezing our socks off in the cold wind. Five layers of clothing were not helping much. At the same time, a bunch of frost-resistant locals were happily bathing further down in the bay, obviously enjoying the weather. Go figure…

The cows left a lasting unpleasant impression, the alien inside me continued to rip his way through to freedom, and all things considered, we decided to cut the day short.

A quick ferry ride from Tarbert should bring us to Killimer in County Clair, where we were fully intent to start looking for a pit stop right away. The ferry was almost empty, with only a handful of cars queuing up to board behind us. We struck a conversation with a Swiss guy, travelling through Ireland with a wife and 2 toddlers in a car packed to the brim with diapers, toys, paper towels, and random assortment of clothing, sticking out of all windows and strategically blocking all rear-view mirrors. One little ray of sunshine was running around the ferry like a maniac, trying to escape and dive into the cold waters of the bay, while the other one started crying his lungs out the moment his daddy switched the engine off on the ferry. For a moment even my alien shut up and paused in awe of the chaos that these two tiny creatures were causing.

Killimer had literally nothing to offer apart from a gift shop right opposite the ferry port, which we were not staying in, so we continued on the road in search of a place that would offer not only shopping, but accommodation facilities as well. The next such place was Kilrush, and this was where we landed. Buggle’s Pub & B&B was the first one we spotted, and despite the proprietor’s grim and suspicious looks, he did give us the key to a room with a bed. This was all I needed at that moment! I slept for about 12 hours straight, and when I woke up, the alien was nowhere in sight or feel. He must have quietly left while I was asleep, and invaded some other poor body in Kilrush. I had no problems with that.

In the morning, we had breakfast downstairs, prepared by an even more gloomy and skeptical wife of the proprietor. None of our charms, compliments to the food, accompanying classical music or the beautify of the interior managed to warm her heart or at least bring a trace of a smile to her face. After a stroll through the town we confirmed that, very untypical to Ireland, gloominess and general skepticism towards strangers seemed to be the two predominant features of all good folks of Kilrush. Most of the people on the streets looked grey, unhappy and generally un-impressed with their surroundings. Convinced that there must be a lot of in-breeding going on here, we packed up our shit and moved on.

The skies looked grayish (I was tempted to say “like everything in Kilrush”, but will not), and we timely remembered having brought rain gear with us, which we readily put on before continuing on our way. And just like that – it started to rain! Well, it was not the heavy rain we experienced a couple of days earlier, just an annoying drizzle that crawls under your skin and fogs your helmet visor. Guess what? Not with rain suits! Well, my visor was still fucked, and I had to use the back of my gloved hand as a window-wiper, but there was no “crawling under your skin” bit! Moreover, the rain suits wind-protective qualities also kept us warm. True, they made us look like two inflatable elephants, but we were not aiming at that month’s cover of a biker fashion magazine, and were quite happy just to stay dry.

Our destination for the day was the town of Doolin, where we were meeting an old friend for a drink, which, inevitably meant that we were staying put there. Riding after an Irish meetup, when even walking can often be challenging, was totally out of the question. Before Doolin, however, a huge landmark, and a point of interest for many locals and tourists swarming the country, was on our list – Cliffs of Moher. According to the guidebooks, the cliffs rank among the most visited tourist sites in Ireland and enjoy (or suffer – depending on your point of view) approximately one million visitors a year. We were more than keen to join the hordes!

Unfortunately, nature was not on our side. The drizzle, following us from the morning, has thickened up into an impenetrable wet foggy wall, and although we hoped for the best, bought the tickets at the Visitor’s Center along with hundreds of other tourists, and even walked around the area in hopeless search for the sights, the cliffs were nowhere to be seen. On the plus side, the two of us were the driest people walking around for miles. We caught more than one glance openly lusting over our rain suits – this must have been the only occasion on record when full motorcycle gear and rain protection made anybody look sexy and attractive! Disappointed about the absence of the cliffs, but chuffed over our waterproof irresistibility, we turned away. Only to find out that since the cliffs were a no-show, the kind Irish tourism board authorities allow us to re-use our tickets tomorrow! Yippee!!! We will be back!

Doolin greeted us with more rain, and crowds of lost tourists, aimlessly walking about. Cullinan’s Restaurant & Guest House presented a lovely opportunity for a stop, bed and a shower. Drying ourselves up we though how ironic it was, that before you get dry you have to get more wet… The place was lovely, with spacious, well decorated rooms, modern bathroom facilities and comfy beds. It also boasted an award-winning restaurant that looked absolutely amazing. We were too hungry to wait till the evening opening hour, though, so consoled ourselves with Guinness and steak in a pub across the road.

Our evening plans were set anyway – meeting an old friend in a McGann’s Pub down the road, having a good time together, and hopefully not remembering anything else about the evening. Walking to McGann’s down the narrow and windy road, we met a couple of locals – a cute little donkey with furry ears and huge dopey brown eyes, and a huge fucking bull, decorated with an unfriendly gaze, and impressive family jewels. The only thing separating both from the road, was a low stone barrier and a thin (hopefully electrical) wire, outlining the pasture area. While the donkey did not look overly dangerous, the unsettling thought that if the bull gets really pissed off, the thin wire (electricity or no electricity!) did not look like a sufficient enough barrier to hold him back, kept bugging us. We sped up, trying to avoid eye contact.

The evening program was completed fully and to everyone’s satisfaction! The morning after greeted us with headaches the size of Brazil, and absolutely no recollection of how or at what hour we managed to get back to the hotel. The lonely bar bill listing 16 Guinness, 12 white wines, and more than a dozen ciders (and this was only what we paid for! From what my hazy memories of the night before allowed me to recollect, our friend Mark readily reciprocated with buying us drinks as well…) was lying on a bedside table, as a guilty reminder (or a proud medal – whichever way you want to look at it), of the excesses of last night.

The uncharacteristic white wines on the bill were on me. After a week of Guinness accompanied by Irish breakfasts in the morning and oysters in the evening, I was farting like a horse. There was no stopping it, and feeling absolutely disgusted with myself, I thought I could soon compete with the cows on the global warming contribution front. This had to stop, and I voluntarily decided to stay off Guinness and switched to wine, regardless of the cost or quality thereof. After 12 glasses, though – who cares?!… The evening/night (we were already hazy on the details) was great, and even though we would be paying for it with hangovers and headaches throughout the following day, we had no regrets.