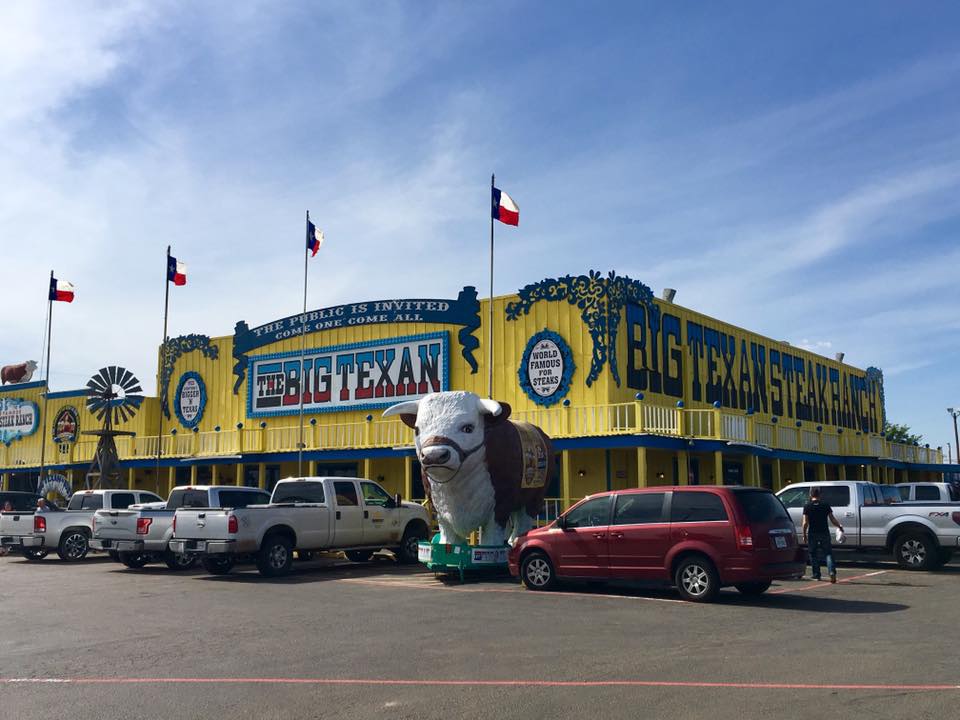 The next stretch of Route 66 was exactly what it was supposed to be – a giant open-door gift shop and amusement park, where you pay with time and miles, and take home priceless memories and photographs.  Had the rain and inclement weather of the first part of the trip not made its corrections to our sightseeing itinerary, this is what it was supposed to have been all along.  We cannot complain, though – even in the rain and wind we enjoyed the beginning of The Adventure, and were hungry for more!

Our schedule after Oklahoma was packed full with places to go and things to see, and the weather was playing along. The skies were bright blue, the sun was shining, and for the first time since leaving Chicago, our rain gear was safely packed away in our side bags.  The next stop on our agenda was the Route 66 museum in Elk City with a big figurine of a Giant Kachina up front.  Truth be told, it was the Kachina that was on our list, and the museum itself came up as an additional and well-worthy surprise!

A Kachina is a spirit deity from western Indian Pueblo mythology.  Interestingly, a Kachina can represent anything in the natural world or cosmos, from a revered ancestor to an element, a location, a quality, a natural phenomenon, or even a concept.  Although they are not strictly-speaking worshiped, each is viewed as a powerful being who, if given veneration and respect, can use their particular power for human good, bringing rainfall, healing, fertility, or protection.  In Pueblo mythology, Kachinas have human-like relationships – they may have uncles, sisters, and grandmothers, and may marry and have children.

This particular Kachina was single and childless, had a nickname of ‘Myrtle’, an unidentified gender and a rather menacing look of a warrior in full headdress.  It was made out of oil drums and scrap metal, and painted in bright cheerful colors.  Despite appearing menacing from a distance, upon closer inspection Myrtle did no look at all scary and was grinning at visitors to the museum with a cheerful semi-toothless smile

We coughed up $5 each for the entrance to the museum, and found ourselves in a meticulously recreated village of the era – complete with a gas station, a school, a prison, a doctor’s house, a pond with a bridge, and a mad collection of old cars inside the main building.  The cars – from an old fire truck to half a Cadillac, from the wide back seat of which one could watch a short horror film (of all things!), were in impeccable state, and definitely added to the visitors’ experience.  All in all, this was $5 well spent!

Most of the way in Oklahoma, and Texas, Route 66 is covered by the Interstate (44 in Oklahoma and 40 in Texas), so this part of the road was mostly not about the journey, but the destinations.  From Elk City, we made it out of Oklahoma into Texas, and within an hour, the route took us to the next destination on our agenda – the U-drop Inn.

A beautifully restored 1936 art-deco building would be the last to be suspected of being a gas station, yet, this was exactly what it was intended for, when first built.  A gas station and a motel – a winning combination in the days of the Neon Highway craze.  The place was operational for as long as 1990, when it was completely abandoned, and subsequently restored.  Nowadays it houses a museum, visitors’ center, an inevitable gift shop you enter and exit the place at, the city’s chamber of commerce, and even a Tesla supercharger, proudly unveiled in 2014.  The diner part of the complex features live-like and slightly creepy wax figure of a waitress, and a carefully preserved fake leather booths with hats on the hangers next to them, and a plaque commemorating the fact that Elvis once sat his ass in one of them.  The place was cool and quiet, and provided a welcome respite to the Texas midday heat.  And they had free drinks!!!!  Nothing of alcoholic content, but hot and cold tea, coffee and water were a nice surprise.

While we were walking around the gift shop and the diner, enjoying our complimentary beverages, a truck with 2 bicycles in the open back pulled over, and two sporty Asian guys in cycling gear jumped out, followed by the scruffy-looking farmer-type driver.  We chatted with the guys, who happened to be from South Korea, and doing Route 66 on bicycles.  The scruffy guy was an occasional help, hauling their bikes in places where the Route wasn’t “cyclable”.  And we thought we were crazy!… 🙂

The Leaning Tower of Texas

The next stop on our agenda was The Leaning Tower of Texas, also known as Britten Leaning Water Tower, on the side of the highway by the town of Groom, Texas.  While many passing motorists attributed the leaning nature of the otherwise most ordinary water tower to tornadoes, earthquake, or other natural disaster frequenting the Texas panhandle on a more or less regular basis, the real cause of the tilt is much more prosaic and straightforward: marketing.  The tower is much younger than your typical Route 66 memorabilia, and dates back to 1980-es, when the Neon Road was already in decline.  Originally, it was meant to serve a very simple purpose – water supply for the nearby truck stop and restaurant owned by one Ralph Britten.  Britten bought it from one of the nearby towns, moved it in one piece to Groom, and proudly painted his own name on it instead of that of the town.  The business must not have been thriving, for Mr. Britten found the need to not use the tower for the originally intended purpose, but set it up as an attention-getter.  Sitting at an 80-degree angle and balancing precariously on just 2 legs without any additional support the tower quickly became the talk of I-40 and the aptly and quickly re-christened Leaning Tower Truck Stop could no longer complain of the business drying out – from that point on, the place was booming.  As years passed by, the truck stop closed down after a fire, but the Tower survived, and can still be admired in all its glory just off the highway, still balancing on 2 legs only.

The next place on our agenda was of a more popular touristy variety, as there hardly is a traveler or resident of the Texas panhandle, who have not heard about The Big Texan, “the home of the free 72 oz steak”.  The source of joy for all gluttons and everybody who was punished for playing with their food as a child, and the source of loathing for everybody else, the place is as cheesy, corny, kitschy and touristy as one can imagine, and an absolute must to visit.  It sits right by the side of the interstate, and is really hard to miss – huge billboards warn about its appearance for miles in advance, and when you finally close in on the place, the giant bulls sitting in the parking lot and on the roof of the building, monstrous lizards in cowboy boots, flags and other super-sized attraction-getters (eat your heart out Mr. Britten!) are right there in your face.  If anything embodies America, “the land of plenty”, in all its bold and shameless glamour – to me it is The Big Texan with its steak challenge.

The rules of the game are simple: a $72 meal of a shrimp cocktail, baked potato, salad, bread roll with butter and a 72 oz (roughly 2 kg) steak must be eaten in its entirety in 1 hour.  The contestants are not allowed to leave the table, or have anyone help them with the challenge.  Upon successful completion in accordance with the rules, the full amount of the meal is reimbursed.

According to the information available on The Big Texan’s Hall of Fame page, some people manage to do all this in under 9 minutes.  I am afraid to think what they look like…  The Hall of Fame records are an interesting read all on their own.  Contestants who finished the challenge are welcome to leave a message to the world, and these range from “Jesus help me do it” and “Sorry, Mom!” to “Where’s the dessert?…”, “All washed down with a diet Coke.” and an honest “I would not recommend this to anyone!” revelation…  An anthropological experience all in its own…

We entered the depths of The Big Texas prepared – it was well past 2 in the afternoon, we did not have breakfast or lunch, and although we were never in our wildest dreams thinking about putting our names into the annals of steak-eating history, we fully intended to sample the more human-sized portions of Texas beef.

Our regular rib-eye steaks looked humongous to an un-trained eye, came with the salads, chips, fried tomatoes and bread rolls, and covered the whole table.  I have to admit, that while the steaks were lovely, I was disappointed – my expectations pictured an out-of-this-world steak experience, but all I got was decent piece of meat.  Unfortunately, it also ended up medium-well instead of the requested medium-rare, but I was too hungry to argue. Well, what do they say?…

While we were struggling with our regular orders, a skinny guy on a podium table was doing the steak challenge.  The piece of meat on his plate looked bigger than the table, but he was going strong.  No idea whether he succeeded in his fight or not, but we were full enough to stay and watch the poor git eat.  We rolled onto our bikes (can people who finish the 2 kg of meat with all side dishes even move????…), and made our way to the downtown Amarillo, Texas.  Parking the bikes, and hauling our stuff up into the room definitely helped work at least some of our meals out.

Warmed up by the evening sun, we waddled to the nearby lovely Crush Wine Bar, where the day ended on a very tasty note.