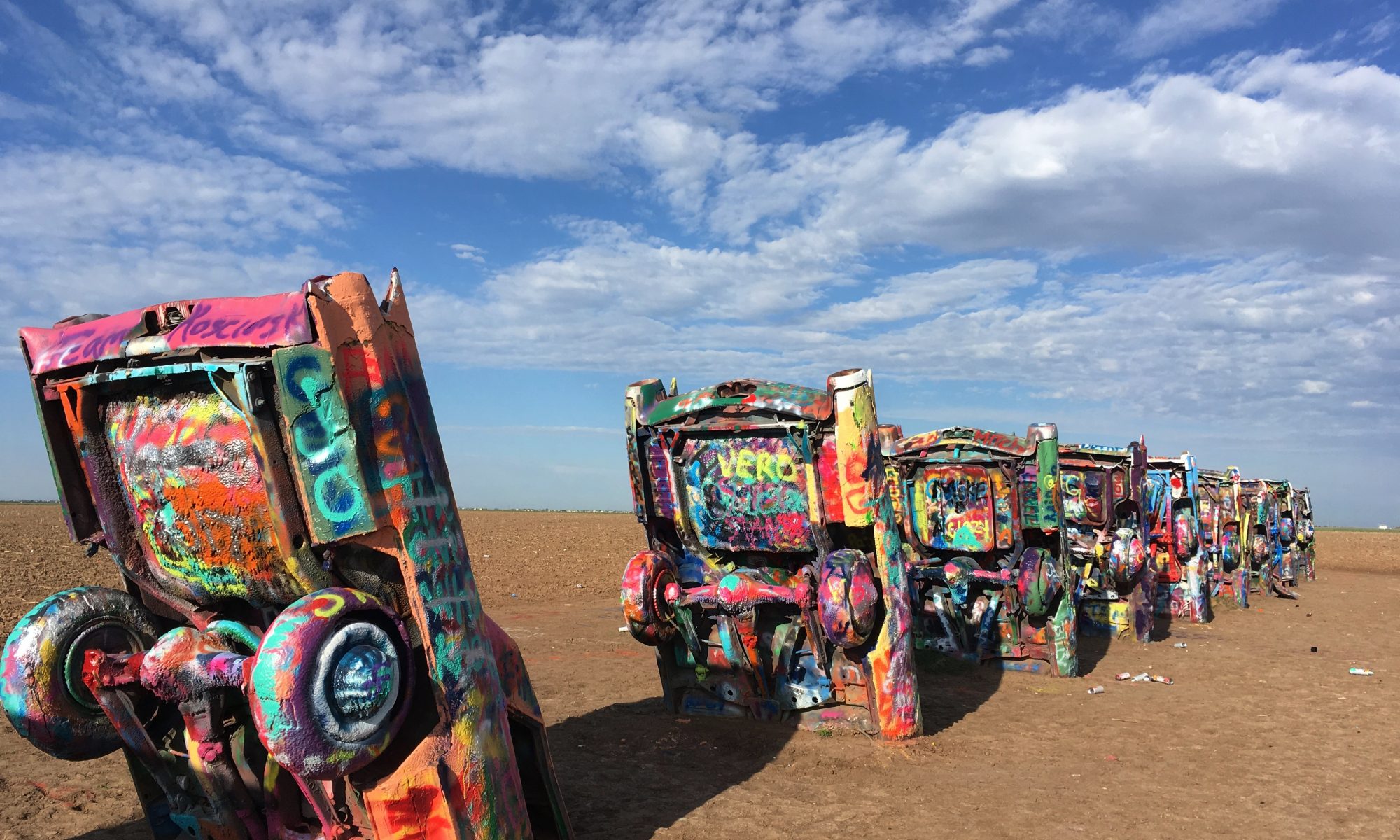 The next morning we were off to the ranch!  The Cadillac Ranch.  Built in 1974 as a monument to the Golden Age of American automobile, this colorful public art installation has been attracting the idle public ever since.  It was created by 2 artists from Ant Farm art collective, who (as often happens to artists) had more ideas than money.  In true American entrepreneurial spirit, however, they did not despair, and looked for sponsorship from American eccentric millionaires.  One of them, a Stanley Marsh, got sold on the idea, and became the patron and the financial drive of the project.  Cadillac Ranch was originally set up in a wheat field, belonging to Mr. Marsh near Amarillo, TX, but 50 years later was transferred to a cow pasture along I-40 to move farther away from the growing city.

The installation is clearly visible from the Interstate, and even though it is set on private land, visiting it is very much encouraged.  Don’t come empty-handed, though – the Cadillac Ranch has long became the set for the public spray-on graffiti competition. Those in the know make a quick stop in Home Depot nearby and come armed with plastic bags full of spray cans. The empty ones are scattered all around, with the contents heartily sprayed all over the empty shells of once-majestic Cadillacs.  Legend has it that before moving the installation to the cow field, the authorities cleaned up the graffiti in an attempt to bring the cars to their original state, but this did not last even 24 hours before the shells were sprayed over again – with a vengeance.

On the backdrop of blue skies with puffy white clouds the Ranch looked very impressive – bright tail fins of 10 massive Cadillacs were sticking out of dusty Texas soil and standing proudly in the air, radiating color and happiness.  They looked tiny from the Interstate, but up close and personal were really quite intimidating – like alien rockets that dove into the field headfirst from the skies high above.  We did not bring any spray cans with us, and admired the installation without the participation element on our part.

We continued along the Interstate (in Texas most of Route 66 went under), trying to make it as fast as possible past the humongous and odorous cow herds.  Those yesterday steaks did not come from nowhere!…

Having experienced a little too much of cows than called for, we were on the lookout for chickens.  Not just any chickens, but giant ones. 🙂 The next stop on our way was The Giant Rooster in Vega, TX.  Made out of metal and painted in bright colors, it was once a roadside decoration for the Roosters Mexican Restaurant.  The restaurant was still there (although closed in the early morning hours when we happened to stop by), but the Rooster has definitely seen better days.  Somehow, it lost its legs on the way, and was now sitting rather sheepishly next to the restaurant’s sign.

Next to the Rooster was another unexpected sight – Route 66 seemed to be full of these little gems – a rusty truck, strategically positioned in the green grass by the side of the road with the Old Route 66 sign next to it.  Another perfect picture opportunity, which we could not miss.

By midday of the 6th day on the road, we made it halfway of Route 66.
1, 139 miles from Chicago, and equal distance from Los Angeles, the Midpoint Cafe in Adrian, TX, marks the spot.  Built in 1928 with the original name of “Zella”, Midpoint Cafe is the oldest continuously operating Route 66 cafe between Amarillo, Texas and Tucumcari, New Mexico.  Now a restaurant, souvenir and antique shop, Midpoint Cafe welcomes visitors and Route 66 enthusiasts for breakfast and lunch 7 days of the week.  Their delicious pulled beef sandwich was just what our hungry hearts and stomachs needed – the weight of yesterday’s Big Texan steaks have finally disappeared, and we were ready to continue with the food program.  Endless cups of hot tea, a chat with the friendly owners, excellent food, and an awesome photo opportunity – altogether a fantastic place!

We were not the only pre-lunch visitors that day, though.  When we pulled in, several more bikes were comfortably parked up front and a group of scary-looking over-sized men were finishing their coffees inside.  Truth be told, after 6 days on the road, we probably did not look much better either…  We struck up a conversation, and the scary bikers turned out to be from Berlin, and were doing Route 66 in the same direction as us.  Unlike us, however, they did not listen to the radio/TV reports when leaving St. Louis, and became the unwilling victims of the flooding, having come up to the stretch of the road with a bridge completely covered with water.  They proudly showed us photos on their cell phones, and they did look scary – not only the road was completely covered with water, but the interstate bridge across Meramec River was nowhere to be seen.  The guys had to go all the way back to St. Louis, and from there look for alternate routes, which substantially slowed them down.  They did not complain much, though – happy to be speaking their native language with someone in the middle of nowhere, they were taking everything as part of the adventure, and having stocked up on T-shirts and souvenirs in the gift shop, they waved us good-bye, and continued on their way.

Happy and sated after our early lunch, we went on direction Tucumcari, NM.  As the first inspiration I got for the trip, the place definitely deserved a stop.  There are quite a few legends, trying to explain the exotic name of the place, with the romantic story of the Indian Romeo & Juliet, Tocom and Kari, being among them.  Appealing as it may be, the legend is complete bullshit, and the name most probably comes from the Comanche word “tukamukaru”, which means “lying in wait for someone to approach”.

Conveniently, Route 66 goes straight through it, so the Blue Swallow Motel was hard to miss.  One of the most photographed sites along the route, and in continuous operation since 1939, the motel offers a great glimpse into the past, and (especially at night, with its sign proudly lit) how bright and glorious the Neon Road used to be back in the day.

Great as the sights and memorabilia along Route 66 are, no road trip is complete without the people you meet on the way.  The good weather of the day definitely contributed to this, and in addition to the Berlin bikers at Midpoint Café, we had another encounter in Tucumcari.  An elderly gentleman politely approached us by the Blue Swallow, asking what brought us there, and shared his own story.  Turned out, his father died several years ago, and when sorting out his stuff, the guy stumbled upon the notebooks his Dad kept over the last couple of years of his life.  The diary contained the notes from the road trips his father did in the US, and as a tribute to his Dad, the guy decided to follow in his footsteps, and travel the same roads his father did.  This was a very personal journey, and the way the guy spoke about his Dad and his notebooks added a uniquely human touch to the day.

It was in Tucumcari that the weather has finally played along, and contributed to the “queen of the road” scenario I have been dreaming so long for.  We were at the Blue Swallow by midday, and by that time the sun heated the air up enough for us to want to shed our leathers, and ride on in but T-shirts.  Finally!

Continuing to enjoy the weather, we wanted to prolong our stay in New Mexico for as long as possible, and planned to stop for the night in Santa Fe.  It was a bit off the way, but we wanted to visit just because we liked the name.  Besides, we read somewhere that the original Route 66 did go through the place before by-passing it through Albuquerque in 1937, and this was all the encouragement we needed.

But not before stopping in Santa Rosa, to enjoy the Route 66 Auto Museum with a fantastic collection of absolutely awesome cars.

With more than 30 amazing cars, all restored to the impeccable condition by the owner of the museum, the place was absolutely great!  A $5 entry fee gets you free access to wander among the shiny, beautiful vehicles, admiring their engineering and aesthetic grandeur.  We wandered there for over an hour, mesmerized.  Somehow, it seemed almost unnatural to have so many amazing cars in one space!…  This set one’s imagination going, thinking of them filling the streets of little towns we passed on the way, and parading proudly along the Mother Road.  If they ever hold parades, or shows outside – this would definitely be the sight to see!

We dragged ourselves away from the beautiful cars, and continued on the way, turning North at Clines Corners onto Highway 285 leading to Santa Fe.

The 2-hour ride from Santa Rosa to Santa Fe was what I imagined and wished our whole trip to be like – in bright sun, open to the winds, riding through the desert in a T-shirt and admiring the surroundings!  I even managed to get a mild sunburn on my arms. The first out of a couple motels we scouted out in Santa Fe ahead of the trip worked, and within minutes we were the proud owners of the keys to our new digs at Sage Inn – a lovely, clean, and welcoming establishment, festively decorated with huge bunches of chilies all over the place.  Our might steeds were parked in the back, and intent on not losing even a minute of sunshine that managed to avoid us for the 1st days of the trip, we headed into town.

Once the capital of Spain’s and then Mexico’s territories North of the Rio Grande, it traces its history much further back – to the times when first Puebloan villages were established in the area.  They had long been gone by the time the Spaniards came in 1607.  Santa Fe is not only the US’ oldest, but also the highest state capital, sitting at an elevation of 7,000 feet.  It also has one of the highest concentrations of arts and music and the 3rd largest art market in the US, after NY and LA.  Considering the relative size of Santa Fe (with the population of just under 80,000) with these two megapolises, this is pretty impressive.  One trivia fact I did not know, was that the Santa Fe Opera ranks among the world’s leading opera companies.  Who knew?…

A lot of buildings in the old town, in the area around the Santa Fe Plaza are built in the old original Pueblo Style – easy and relaxed, yet simultaneously grand-looking, these adobe buildings tower over the old streets and provide the much needed shade to pedestrians.  They also look especially flattering on the backdrop of dark blue skies with white puffy clouds.  This is how we remember them, at least.

A walk in historical downtown with Bacon Bloody Marys in the Thunderbird Mexican bar and great wine and amazing food in a fantastic ambiance at La Plazuela finished this long day off.  We walked back to the Sage Inn and turned in for the night, with lovely memories and full intentions to one day return here for a longer time.