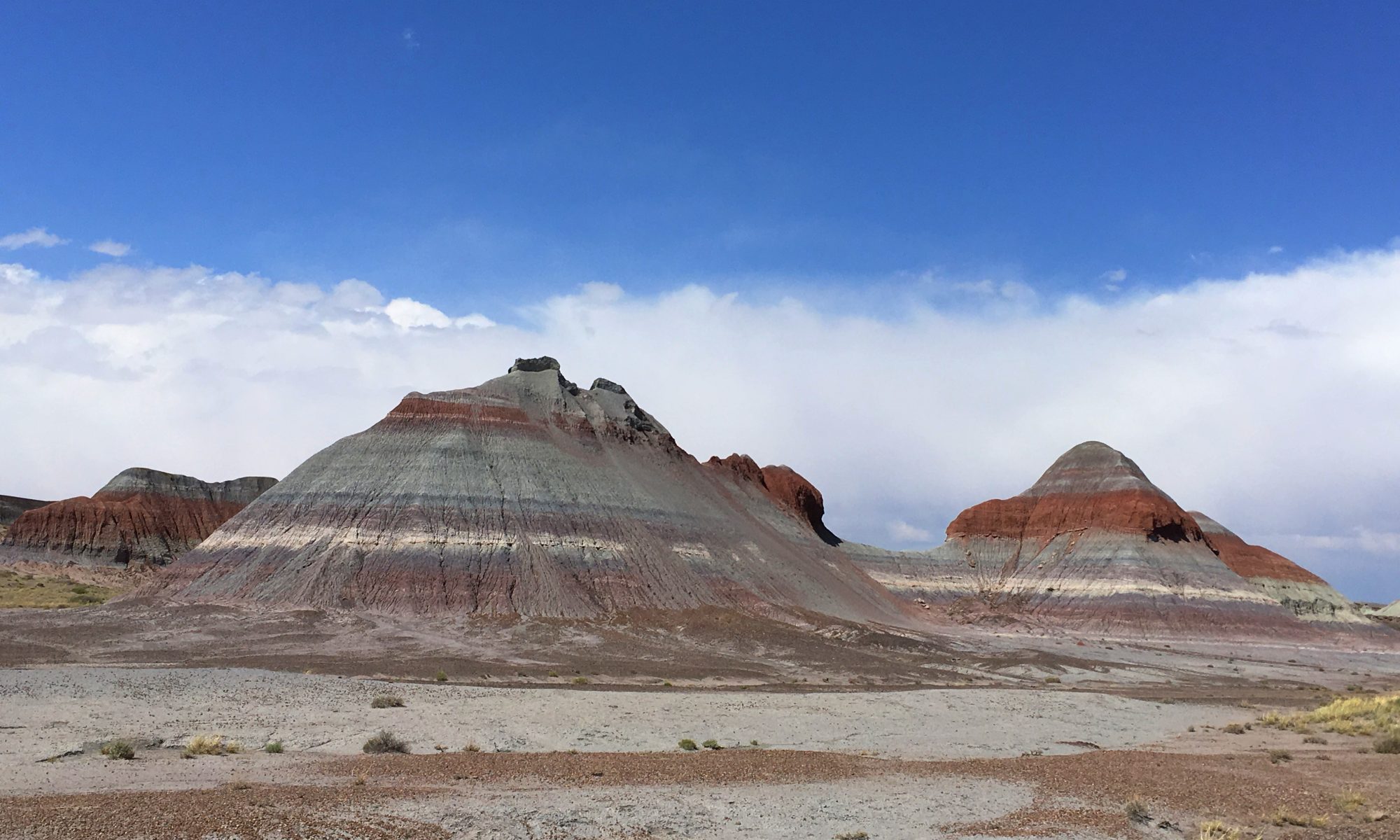 The next morning it was time to say good bye to Santa Fe, and continue on our route. Warmed up by the early morning sun, we repeated the “Queen of the Road” experience driving down I-25 past Albuquerque and further West on I-40.  This day’s goal was not the journey, but the destination, as the stretch of the historic Route 66 between Albuquerque, NM and Holbrook, AZ was almost fully covered by the Interstate.  In good weather it turned out to be not as horrible to ride as in pouring rain and gale-force winds, so we did not really mind the absence of scenic views.

In 3 hours of easy and smooth riding we reached Arizona.  The Grand Canyon State boasts not only 3 big national parks including The Canyon per se, but over 30 state parks, a dozen national monuments and numerous national forests, conservation areas and parks.  One can easily spend several months in Arizona alone, and still not have enough time to see all of the natural wonders the state has to offer.

It’s ironic, actually, that when thinking about visiting the US, so many people think only of big cities, like New York or San Francisco.  A rare breed of tourists may have heard about Yosemite National Park. At the same time, thousands of others, equally beautiful and breath-taking, usually stay out of the spotlight, and get discovered only by chance.

Don’t get me wrong – I am a big fan of New York, Chicago, San Francisco and Los Angeles, and would always come back as soon as an opportunity presents itself.  I don’t, however, think that these megapolises truly represent America.  It’s only after having been to the “backwater” country, visited a fair share of shitholes and traveled throughout the continent, that one can really feel the true soul and spirit of America.  The natural wonders one sees on the way (and the further West one goes, the more numerous and breath-taking they get) truly beat the architectural ones any time, and without the real people populating the small-town America one can’t really form a proper impression of the nation.

With such a variety of everything, it is no wonder that so many Americans don’t bother travelling abroad.  When you have everything your heart can desire in your own country – from a range of climates and different landscapes to natural and architectural sights, monuments and cultures – why bother suffering through the inconveniences of long flights, getting used to foreign currencies, and strange languages?…

Having been to 34 out of the 50 states, I think I have a good general overview of what’s in store out there.  However, if anybody asks me about my #1 place in the United States, it won’t be New York or Chicago.  Not even the dearly beloved Grand Canyon would make it to the top.  Like a true nerd, I would be original, and name the Mojave Desert in winter the place I would want to visit again and again.  Don’t ask me why.  The absence of people, endless wide open space stretching all the way to the unreachable mountains in the horizon hold some very special magic for me, and call to my heart and soul like sirens in the void.

OK, enough of soapy sentiments and back on the road!

Route 66 goes roughly through the top 3rd of the Grand Canyon State, and much as we were tempted, we were on the agenda,and managed not to stray away from the initially planned route.  Luckily, 2 of the 3 national parks, the Petrified Forest and the Grand Canyon were sort of on the way, and we planned to visit and enjoy both.

Holbrook was chosen for the night’s stop due to its proximity to the Petrified Forest National Park, which we planned to thoroughly enjoy and spend significant time at during the day admiring the colorful rocks, prehistoric trees and other natural phenomena the park had to offer.

We stopped at the North entrance to look at the map, and had a friendly chat with the only other person there – an old biker with a grey pony-tail and sideburns on a Triumph.  There’s nothing like a bike to strike up a conversation!  The beginning was promising.

The park consists of 2 parts – the smaller Painted Desert section with its colorful Badlands to the North of I-40 and the bigger Petrified Forest area, one of the biggest deposits of prehistoric wood, stretching South from I-40 all the way to US-180.

The anticipated cool landscapes of the Painted Desert part were, indeed, fantastic!  The real things were even more colorful and humbling than the Internet photos that attracted me in the first place.  We gasped at the bright Badlands, and the deeper into the park we rode, the more picturesque the scenery got.  The Painted Desert was more beautiful than anticipated, but still expected.

What came as a surprise and a total “idiot bonus” was the Petrified Forest part.  If you have no idea what “petrified” forest, or “petrified” wood is – don’t worry, I had no clue either!  I googled the park, and upon seeing really cool landscapes put it on our list.  “Petrified wood” turned out to be an official term for fossilized remnants of prehistoric vegetation, namely trees that grew in this particular area as far back as the Late Triassic Period, or “just” 225 million (!) years ago.

Mind-boggling as the age of the fossils was, it was the look of them that was simultaneously weird and amazing.  Giant tree trunks and stumps lying all over the place looked absolutely real.  Only on closer inspection you would realize that you are not looking at wood anymore– over the millions of years the trees fossilized and turned into stone, yet preserving the look and structure of proper wooden logs with tree rings and all!…  We were mesmerized.  Riding through the park we stopped at every single vista point, and walked around forgetting the time, grinning like two idiot children and getting cruelly tricked by our own minds every time we touched a perfect-looking tree trunk and felt cold hard stone under our hands.

Riding through the park we unwillingly experienced one more natural phenomenon – a desert thunderstorm.  The dark clouds that have been loitering on the horizon throughout the first half of the day, suddenly sped up while we were crossing from one part of the park to the other, covering the skies with an unexpected sprint, and before we knew it, we could barely see the road ahead through the pouring rain.  What’s worse, the rambling of the thunder and bright flashes of lightning scared the shit out of us in no time – being on a moving piece of metal in the middle of the desert during a thunderstorm was just asking for trouble.  Dying at a strike of a lightning would undoubtedly make for an epic ending, but we weren’t ready just yet.

The Irish luck brought us to a rangers’ tool shed on the nearest vista point, and leaving the bikes to be washed by the buckets of rain falling from the sky, we crammed into the shelter, fighting for space with each other, shovels, buckets and other random tools rightfully inhabiting the shed.  The rain was over in 5 minutes, and stopped as suddenly as it started – as if somebody high above closed the water tap.  The sun came out,and in no time the big pools of water collected on the ground and on our bike seats started disappearing.  The storm clouds retreated back to the horizon, but continued loitering menacingly in the background, making us eye them with suspicion and speed up our sightseeing mode.

No idea how long we spend in the park – it felt like just a couple of hours, but must have been the whole day, for when we left it through the South gate, it was already twilight.  There was something about endless colorful Badlands and prehistoric trees that made time stretch if not stop.

The digs for the night weren’t hard to find –the main drag of Holbrook offered a dozen motels on both sides of the road.  We opted for a Day’s Inn, that seemed to be within walking distance of the only visible dining establishment,and ended the day with a shitty pizza and surprisingly good wine in a local Italian restaurant.