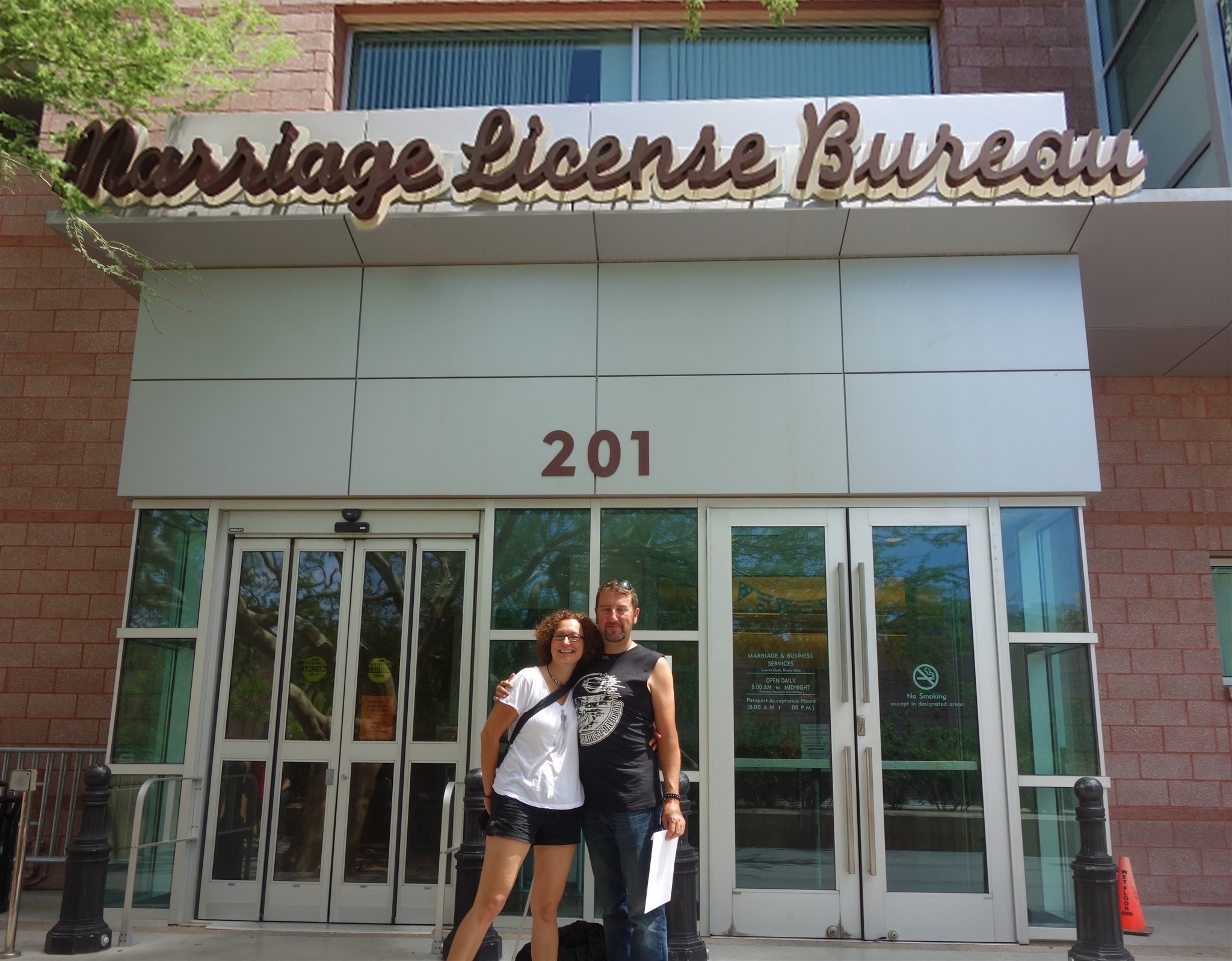 Time for full disclosure: we had inferior motives for our dash into the desert. We were not into gambling, our high school bus trip days of getting drunk away from the parents were long gone, so technically we had no business in Sin City. But the place is famous for something else, apart from gambling – namely, nuptials. Yes, we were going to Las Vegas to get married!

In the best nomadic traditions the wedding chapel was booked on the phone from an airport lounge, the dress bought on eBay, the wedding party assembled on the way, and the marriage license application was filled in during an especially long and boring telephone conference at work. Ok, to be fair, the eBay dress was swapped for an impulse purchase on the day of the wedding, but that only added to the craziness of the moment. We were going to Vegas, and we were going to get married in the best American tradition in a drive-through on motorbikes in the Tunnel of Love of The Little White Wedding Chapel, that had the dubious honor of wedding Michael Jordan, Joan Collins (several times, if I recall correctly) and Britney Spears. And we were about the join the club.

The wedding business, ranking second in Nevada after gambling, but winning over prostitution, is localized to the old Vegas downtown, a bit away from the Strip. Numerous chapels (all operating 24/7), wedding gown & tux rentals, beauticians, and every other imaginable business working on “Cupid call” cater to all sorts of clientele and offer services for all tastes and absence thereof.

Even though the state of Nevada simplifies the whole process to the utmost (online paperwork for 40 bucks, no blood tests, no documents – all at word’s value), you still have to pick up your marriage license at the Vegas Marriage License Bureau in person, with both parties present and armed with IDs. This is where we were heading, having googled the address in advance.

Vegas downtown represented chaos with mild attempts at organization. Around the corner from the Marriage License Bureau a group of women was chatting amicably on the sidewalk. The younger one of the group was holding a newly-born baby up in the air, and pointing to the small-windowed building across the road, was cooing at the top of her lungs “Look at Daddy, look at Daddy!” Our worst suspicions proved true, when we saw “Clark County Detention Center” written in big letters on the gates of the building. Directly across the street, on the side of the Marriage License Bureau building a door, brightly decorated with flickering lights boasted two signs of equal size competing with each other above it: “Bail Bonds” and “A Little Lucky Wedding Chapel”. Only in Vegas!… As my friend Jane said about this unusual symbiosis across the road from city prison “He’s gonna pay that child support one way or the other!“

Inside the Marriage License Bureau a long line of people of varied ages, races and states of intoxication was impatiently waiting for the official permission to get married. The “express lane” for those who filled their applications online was refreshingly empty. Why none of those trapped in the “regular” queue attempted to open an Internet browser on their phones to fill in the bloody application while waiting in line, beats me. Don’t look for logic where you did not put it… Followed by unfriendly gazes from the wrong side of the queue we proudly proceeded to the window through the “express lane”, where a cheerful girl issued our marriage license within a matter of minutes, and congratulated us on the upcoming event. It all seemed to be happening quite fast!…

With a view of the soon to happen event, we did not come to Sin City alone, but managed to drag everybody we knew on this side of the ocean along. The forthcoming 4th of July and the long weekend played into our hands. Fletch & Jane were the only people who knew about our plans all along, all others were surprised with the news upon our arrival at their respectively welcoming homes, and all signed up.

The wedding gang started to assemble on the evening of the 2nd:

The Treasure Island (one of the oldest hotels on the Strip that has definitely seen better days) was accidentally chosen as the center of operations for the following two days. One by one, all arrivals checked in and by some magnetic force gravitated to the bar, where everyone started drinking heavily right away, swapping jokes and horsing around as if they all knew each other their whole lives. The following day was quickly shaping into an absolute blast!

Speaking of old friends – even if not everybody in the party knew each other, some of them were introduced before. Nika, Jane and Fletch all met in Munich, when they all lived there. Jane and Fletch met Andy on one of their trips to London, and even went to one of the performances Andy directed and Nika acted in. Thomas and Cindy were old friends from Munich, and worked Irish pubs together back in the day, when Cindy met Seany. Jane & Fletch met Thomas in Munich at Oktoberfest when visiting after they moved back to the States. I truly believe that all good people in this world should know each other, and will never tire of introducing them to one another!…

The Big Day started with brunch in a fancy restaurant (breakfast was out of the question for obvious reasons – the “get together” evening stretched well into the early hours of the next morning). When everybody woke up, we timely remembered that we had a professional in our midst: our friend Thomas not only worked in gastronomy, supplying the best restaurants with Munich with delicacies, but was a true food connoisseur and aficionado on his own time. He already had a couple of places pinned down for further exploration, and since one of them happened to be within walking distance from our base of operations, the decision was made: we were going to Sushi Samba!

Here I have to make a quick detour and explain something to the audience: while Vegas hotels are all relatively cheap, everything else in Sin City is definitely not. You save on the hotel fare, but they are going to get your money one way or the other: you pay double for everything else, starting from water (logical in the desert, isn’t it?…) to food and entertainment. Besides, most people do go there on a “once-in-a-lifetime” trip, and are fully consented to spending stupid money in Sin City.

This way, we fit in with the mainstream crowd quite well: it was our wedding day, after all, so being stingy was not in the plans. Good so, for Sushi Samba definitely did not belong in the budget variety of lunch/dining establishments. We allowed ourselves to be persuaded into the sampling menu and fully enjoyed it – everything brought onto the table was exquisite! After a lazy 2-hour brunch, we waddled back to the hotel to get ready for The Event.

The chapel was booked for 5 in the afternoon, and even quick dashes from one refrigerated hotel/casino to another in +40C heat called for regular showers in-between. Having spent the previous two weeks on a bike alternating between two pairs of jeans and four T-shirts, there was no way in hell I would be wearing a regular biker outfit for the wedding! Besides, part of the lure of the whole thing was a chance to ride through Vegas in a dress. My last-minute purchase was a black and white (of course!) number with a bow around the waist, and a full skirt with a petticoat long enough to cover my knees, but short enough not to get tangled in the wheels or the engine of the bike – perfect!

I was running between the shower, mirror and hairdryer when I received a cryptic text message from Olga, nonchalantly asking for the address of the chapel. Up until that moment, I was sure that neither she nor Sean would be able to make it. I called back asking what the hell, and was informed that they were driving like maniacs and expected to be in Vegas by 5. I could not have wished for a better surprise!!!

By quarter past four the main group assembled in the parking garage, and moved in the direction of The Little White Wedding Chapel. Seany, Cindy and Thomas led the group in style in a red Mustang convertible. Nic and I followed the car on our bikes, Jane and Fletch were riding right behind us, in solidarity on rented Harleys. Nika and Andy closed this unusual procession in their car with “A Highway to Hell” blasting out of the speakers. The beginning could not have been more perfect!

At the chapel, the four girls locked themselves in the bathroom (one for all), trying to fix the damage made to our appearances by heat, wind and helmets, while the boys passed the time kicking tires of the big pink Cadillac parked at the entrance. Ten minutes before five a nondescript rental car rushed into the chapel’s driveway, brakes screeching, and changing on the way into party clothes, Olga and Sean rushed out to join the gang. The party was finally complete, and the wedding could get started!

Here I again take a bit of a time off, and will continue the epic wedding story in the next installment. Cheap trick, I know, but there simply were too many emotions, impressions and memories to squeeze them all into one chapter! With this in mind – to be continued…