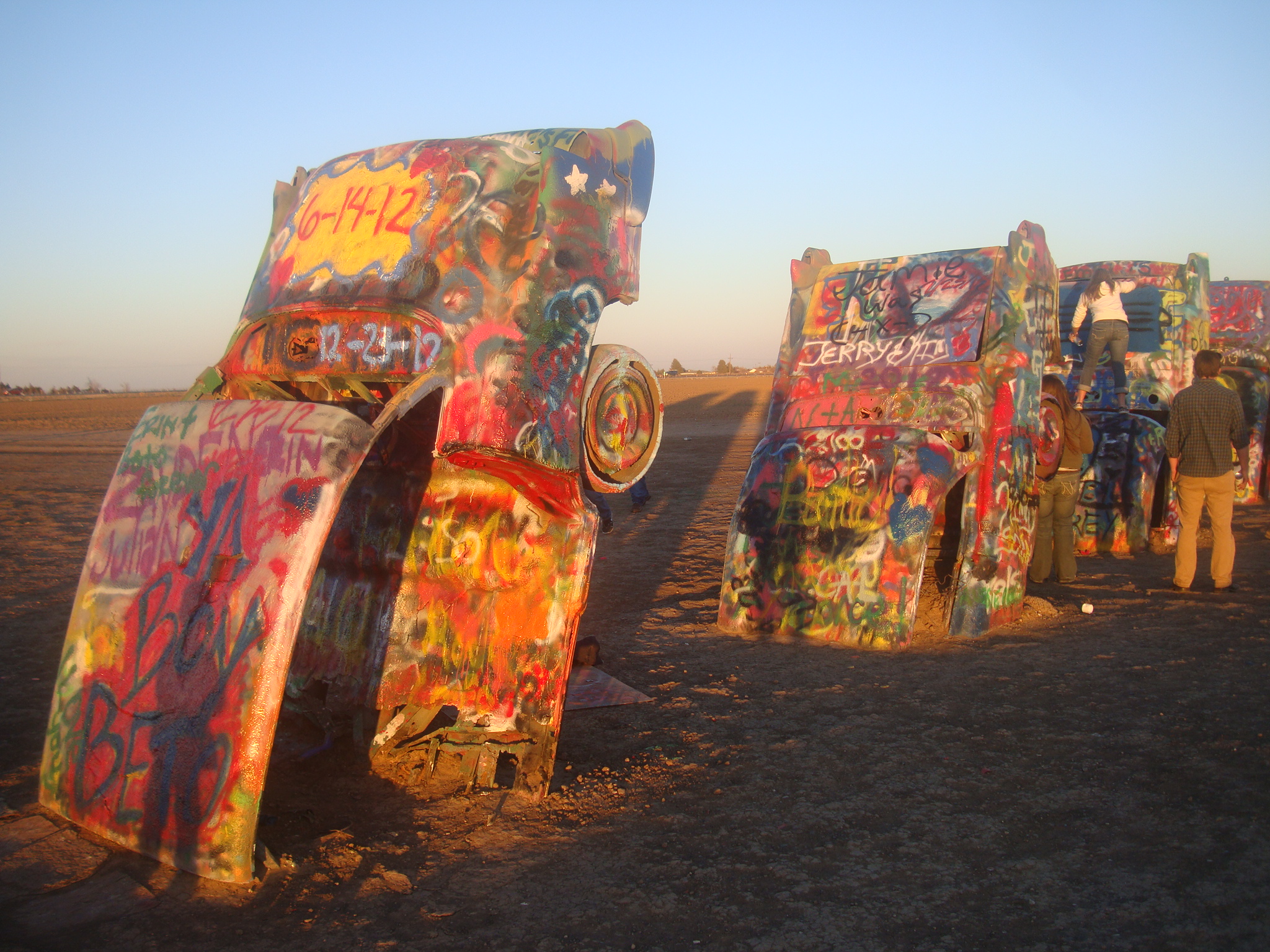 Moving on with the story.

On the second day, we left the city of weatherproof men and the state of Missouri, and made an 11-hour dash in the direction of New Mexico.  The plan was to stay there for the night, and move on to Grand Canyon.  The road to New Mexico went through Oklahoma and the upper part of Texas, which (just like St. Louis) was remembered for completely unexpected things.  But all in its time.

Since the whole of the 2nd day was spent on wheels, the impressions and memories of the day were all of the roadside variety.  First, the semi-cultural and partially historical part of those.

The road from St. Louis to New Mexico goes along the historical Route 66 (also known as the Mother Road), that in its time became the first proper highway, going across the country and directly connecting Chicago and Los Angeles.  In the end of the 20-es, beginning of the 30-es, when Route 66 came about, it became the start of the biggest road trip boom in America.  Everyone and their mother jumped into their big and beautiful (or big and run-down) cars, and went on an Adventure.  Route 66 quickly sprouted the business of roadside diners/cafes/motels/snack-bars that was non-existent before, but immediately became the toast of the day.  Low gas and electricity prices strongly supported this development – in the 40-es and 50-es the Route became “the neon road”, and the brightly lit shitholes that it went through, quickly became if not the center of the Universe, but definitely the center of life.

In the 60-es, it all came to a rather abrupt end, and the millions of diners along the road, just like the road itself, started closing down.  The reason and main menace was the development of the state-wide system of highways (none the less, but the Eisenhower Interstate System), connecting states with one another directly, as opposed to going from one shithole to another.

In some places Route 66 stayed as a country road going along the main highway, and in many places simply got covered over by the bigger and more modern road built on top of the old one.

It was along this road (and partially on it), that we drove.  You can still see the little road-side towns, whose life-support was cut off by the highway – most were already dead, with the sorry few still clinging desperately to life, but loosing the game to modern times.

Some of them try to capitalize on former glory, and attract the tourists and Route 66 fans by the “true spirit of the 50-es”.  In one such place (that turned out to be quite famous), we happened to stay for the night.

While driving along the highway (this isn’t Germany for you – the speed is limited to 75 miles an hour, so you have plenty of time to take in the scenery), you get to know a new genre – billboards.  In America they are big.  Very big.  Literally – big enough to be spotted from miles and miles away.  Not only are they huge, but many are also put on top of big-ass poles, to ensure their definite visibility even on a hilly terrain, and not just your basic field or desert.  The billboards group closer to towns and villages – you can actually tell that one is coming up soon by the appearance of billboards.  However, sometimes, the billboards can be found in the middle of fucking nowhere, right at the center of a local shithole, where you don’t expect anything to be.

The topics of ads posted on billboards varied from state to state, but the everlasting human values prevailed.  Apart from the obvious – food and lodging – toilets were definitely taking the lead.  The fireworks (turns out that an uncontrollable urge to blow up shit for New Year’s is quite universal and international!), antique markets, and adult stores followed closely in tow.  The “antique markets” category could include anything – we did not check, but the sole numbers of those was disturbing.

On the subject of the toilet ads (here we are leaving the historical or even semi-cultural part of the story, and moving on to the purely anthropological one) – having gone through several states, we started seeing certain tendencies.  In (excuse me) Oklahoma, the main advertised aspects were the size and cleanliness.  Every couple of miles the huge “Large Clean Restrooms” billboards were jumping at you.  In some cases, the first word was written in all capitals.  While I am all in favor of the toilets being clean, and definitely believe this to be the winning point when it comes to advertising them, somehow the size was never a point to consider.  Obviously, in case of dear need, the absence of either, or even toilet paper or a door that closes, would not stop anybody, but still…  Makes one think of the size and weight of an average resident of Oklahoma…

In Texas, the topic suffered some variations.  Here cleanliness came first.  The size no longer seemed to be in the picture.  Although, according to the locals (whose attention I immediately drew this discrepancy to) everything in Texas is big anyway, so there was no need to waste advertising space pointing out the obvious.

Oklahoma did not seem to worry about either the cleanliness, or the size of toilets.  The billboards continued, but the main focus here was free access.  “Free Restrooms” were advertised all over the state.  Which was quite strange, as the idea of paying for basic human needs has never been popular in America.  You can use a toilet in any MacDonald’s or a gas station free of charge, without the need of purchasing anything there.  And none of these toilets has an old lady sitting in front of it, collecting your pennies.  I could not quite figure out what the deal with advertising free toilets in the country where everybody pees for free anyway was, so the suspense remained…

The thing with fireworks has not been fully clarified either.  Well, we were on the road right before New Year, when pyrotechnical activity of population increases dramatically.  In the States the same thing also happens around the 4th of July.  But what are all those huge hangars full of fire crackers and industrial-size fireworks doing the rest of the time?…  I doubt they are only open several months a year…  Maybe they partner up with “Antique Markets” or the no less popular “Adult Stores“?  This should definitely help mutual survival.

Moving on from anthropological values, apart from the advertised sizes of toilets, Oklahoma had absolutely nothing else to write home about.  We did not make any stops anyway…

Texas was also paid just a fleeting visit, and we only drove through its top part.  However, the state left quite a memorable impression, which due its passing nature was impossible to capture on camera.  Driving by along the highway we happened upon an epic sight: a cop car with flashing blue lights parked on the curb side.  In front of it, well-illuminated by the headlights, was a policeman in a huge Texas cowboy hat, handcuffing the driver of the stopped car, lying face-down on the hood of his own vehicle.  The scene made us think, slow down, and get the fuck out of the “big and beautiful” state as fast as the speed limit would allow.

Before getting out, however, we had a chance to pay quick respects to one of the lesser-known landmarks of the Lonely Star State – Cadillac Ranch.  In mid-70-es some modern artist had a bright idea of collecting old Cadillac shells from scrap yards all over the country, and planting them into the Texas desert.  Standing nose-down in the ground the Cadillacs almost immediately attracted graffiti artists and those with nothing to do and a handful of spray-paint cans in the household.  The car shells were quickly covered with dozens of layers of graffiti of all shades and colors.  At some point the State of Texas made an attempt to clean the landmark from paint, but the initiative did not even last 24 hours: the graffiti was sprayed back on.  With a vengeance.

Now not a single self-respecting visitor to the Ranch (we were tourists, so off the hook by default) comes to the sight without a quick stop at a nearby Walmart, where they stock up on spray-cans.  Armed with as many as they can carry, people get down to business – a trip to Cadillac Ranch is not for the idle: visitors get to work the moment they enter the premises.  We saw whole families with toddlers, busily spraying paint over the barely recognizable shapes of what used to be a row of Cadillacs.  In the bright lights of the Texas sunset they sure looked colorful.  We stopped by, looked, felt out of place without the spray-cans, and left.  Another unorthodox landmark ticked off the bucket list…