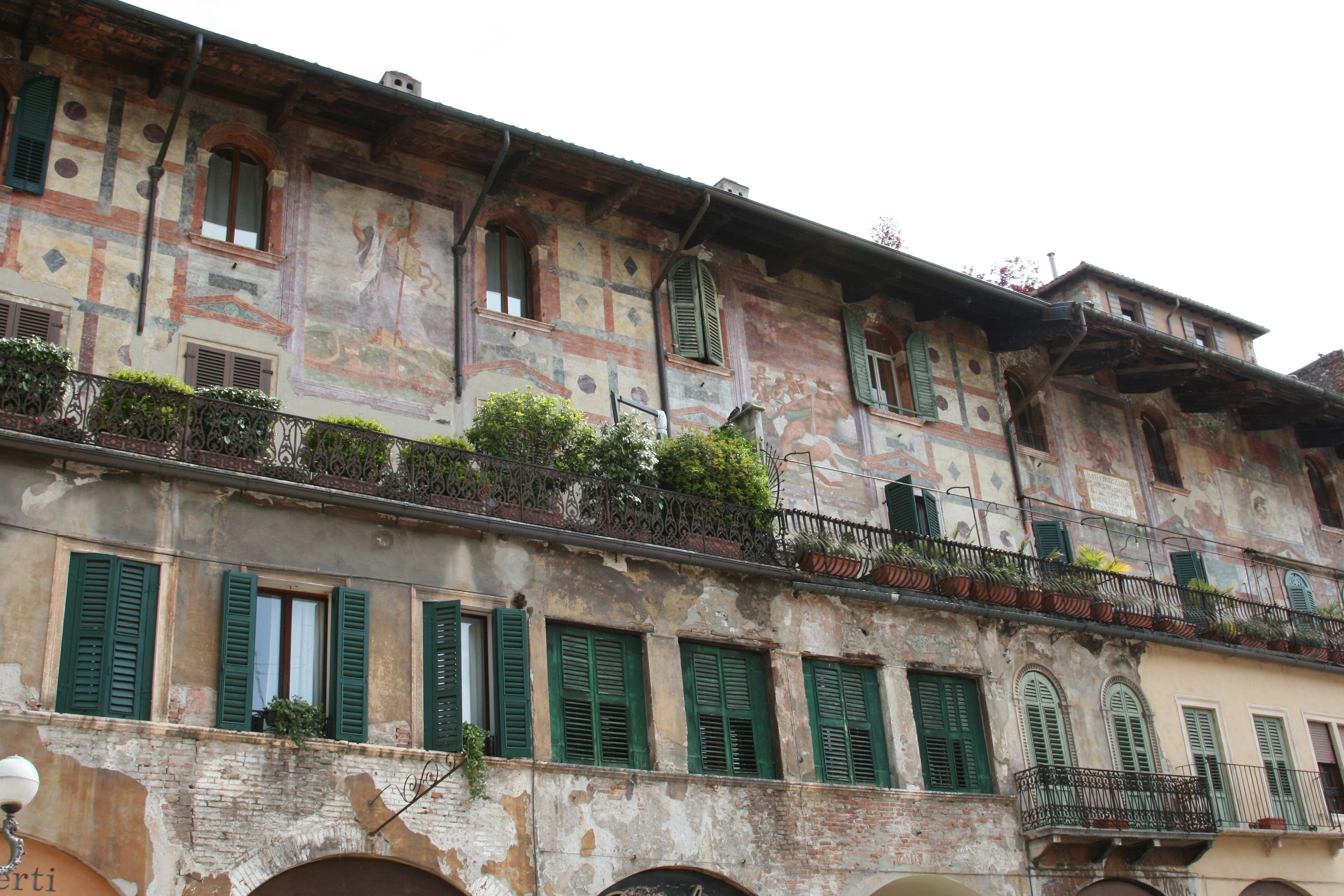 The morning of the next day greeted us with heavy rain, dark skies and winter-like temperatures. The weather forecast for nearby Verona, however, was hinting at sunshine. This raised our sinking spirits, for even bundled up in all the warm clothes we could get our hands on, we already started coughing and sneezing at the first signs of rain. Having checked out of the hotel (none of the guests from the wedding party were anywhere to be seen), we were ready to follow the sun.

Leaving Malcesine with its elephants behind, we moved on towards the new destination. Our plan was simple and prosaic: find accommodation for the night, check out the balcony of Juliette and do some sightseeing without being soaked by rain, drink some good Italian wine, and eat some good Italian food. Looking back at the day in Verona, all objectives were achieved!

The trip from Garda to Verona did not take long – less than an hour. For a change I sat behind the wheel, and confused over the discrepancies between GPS instructions and the realities of landscape, sweated like a dog in Chinatown all the way to the city. By the time we parked the car in the center of Verona, I was way too stressed to be friendly. To our mutual credit, we managed not to crash the car or kill each other, trying to decipher the route in the maze of one-way streets, blocked roads, and general chaos of Italian traffic. By way of calming down and restoring diplomatic relationships, we set on a sightseeing expedition and went to explore the surroundings.

The surroundings looked cheerful – the sun was shining, and the buildings around town sprouted a variety of balconies of all shapes and sizes. The little side-street we took off the parking lot, led us to the main square of Verona, where the market rows of stalls, full of cheeses, salamis and wine, were just being set up.

Speaking of balconies – don’t know whether it was the fame of THE balcony, that projected itself onto the other buildings in the city, or Verona historically focused on this particular architectural aspect, but the concentration of balconies on each square inch of the city surface was impressive. You could see all sorts – from barely visible tiny structures with wrought iron railings covered with vines, to huge balustraded stone monstrosities, growing on the sides of buildings and threatening to tip them over with their weight. Even towers had balconies!

The market became a worthy starting point of our day walk through Verona. It mesmerized with an abundance of colors and gastronomic delicacies, as well as simply tasty, high quality and beautiful-looking food. The bread stall alone was to die for! And I don’t even like bread!… The loafs on display were huge, aromatic, and were piled up in gigantic dough balconies over two tiny girls, slicing these freshly-baked treasures for customers crowded at the front.

The scents, odors and colors of the spice stalls next door could compete with any Turkish bazaar, and huge piles of dried tomatoes were threatening to drive you crazy with their juicy aromas.

Cheese stalls were looming with huge round cheeses, free samples of which were being pushed at all passers-by by the stall owners. Above the cheeses hung rows and rows of salamis of all sorts, prices, and origins. Those were also being offered for free tasting to everybody. All in all, one could easily have a hearty breakfast, lunch, and dinner at the market for free, by simply sampling the foods on offer.

After about an hour spent at the market, we finally noticed a huge ancient Colosseum (aka The Arena) which also happens to be one of Verona‘s main sights, dominating the North-Eastern side of the square.  Nostra culpa, we were carried away and distracted by the cheeses, and almost managed to overlook this gigantic historical and architectural masterpiece. Speak about a pink elephant in a room!… The Colosseum/Arena was quite impressive with an aura of centuries-old ancient stability and grandeur. In warm times of the year it also houses open-air operas, the fame of which made it even to Munich (I vaguely remembered big posters on the streets, advertising the happenings). Considering our generally positive impressions of Verona, I am sure we will be back, and might even risk the opera one day!…

After a lot of walking around we did find the balcony of Juliette, although not without hassle. The hassle was all self-imposed, for we chose not the easiest way of locating the sight. Instead of following the herds of tourists, crowding the city’s streets both in organized groups, led by guides with colorful umbrellas, and in a chaotic “lonely ranger” mode, we did our utmost to avoid them. As a result we almost missed Verona‘s main sight. The absence of a map (which we also refused to buy, following some half-formed pagan prejudices) did not help one little bit. Despite all this, the balcony was localized, visited, and photographed. The impressions and feelings it evoked can best be described as “mixed”. The balcony itself was quite OK – the size of a regular bath tub stuck to the side of the building, big enough to contain two grown-up adults in a vertical position. The fact that Juliette used it alone, and Romeo was confined to the sidewalk underneath it, made it even more spacious.

The house of Juliette’s Dad (and the balcony on the side of it) is situated in a tiny little courtyard, not bigger than 150 square feet (~50 square meters). On busy days a couple hundred tourists squeeze into it in abnormal concentrations, positioning themselves on each other’s heads. The most determined ones make it to the balcony per se, taking selfies with iPhones and iPads in various kissing positions.

Here’s another anthropological curiosity: if you made it to the other side of the world, found the proverbial balcony and after queuing for hours managed to squeeze into it, isn’t it tacky to commit the moment to memory with a shitty-quality picture made by a device not intended for photography?… Why not get a proper camera? Another point to the question about searching for logic where you did not put it…

The Tourist Information Office of Verona, represented by two giggly girls, put us up for the night in a very central Albergo Trento hotel, within walking distance of The Arena, that has obviously seen better days. The owner of the establishment, presiding behind the reception, looked like an excommunicated son of royalty – of advanced age, with respectable grayish sideburns, dressed in a periwinkle blue club jacket, and electric-yellow jeans, matching his Canary-yellow loafers. Full of dignity, he handed us the keys, and wished us a lovely afternoon. His Rubenesque wife, sprouting a fresh perm, about ten layers of skillfully applied makeup, a couture dress, and a mink cape (in late April!) arrived at the hotel when we were just checking in. She dramatically stopped the sports car right at the front door with brakes screeching, and while the junior hotel staff were parking her bright red vehicle out, she threw her mink over the bar in the corner of the lobby and busied herself with an espresso machine, blinding the guests with a smile and a décolleté of an opera diva. Can’t get more Italian than that!…

In search of late lunch aka early dinner, we stumbled upon a brilliant place, called “Osteria Le Veccete“. The place attracted us primarily by gigantic wine bottles, decorating its entrance. The interior of predominantly wine motives supported the idea that we came to the right place. Fantastic food became a bonus to the genius wine selection. We were so thrilled with the place, that returned there in the evening to repeat the wine part of the afternoon program. We would have repeated the culinary one as well, but did not have any free space for that…

Stumbling back to the hotel way past midnight, through the still buzzing downtown of Verona, decorated with tempting lights of late bars and restaurants, we were happily looking forward to further adventures.