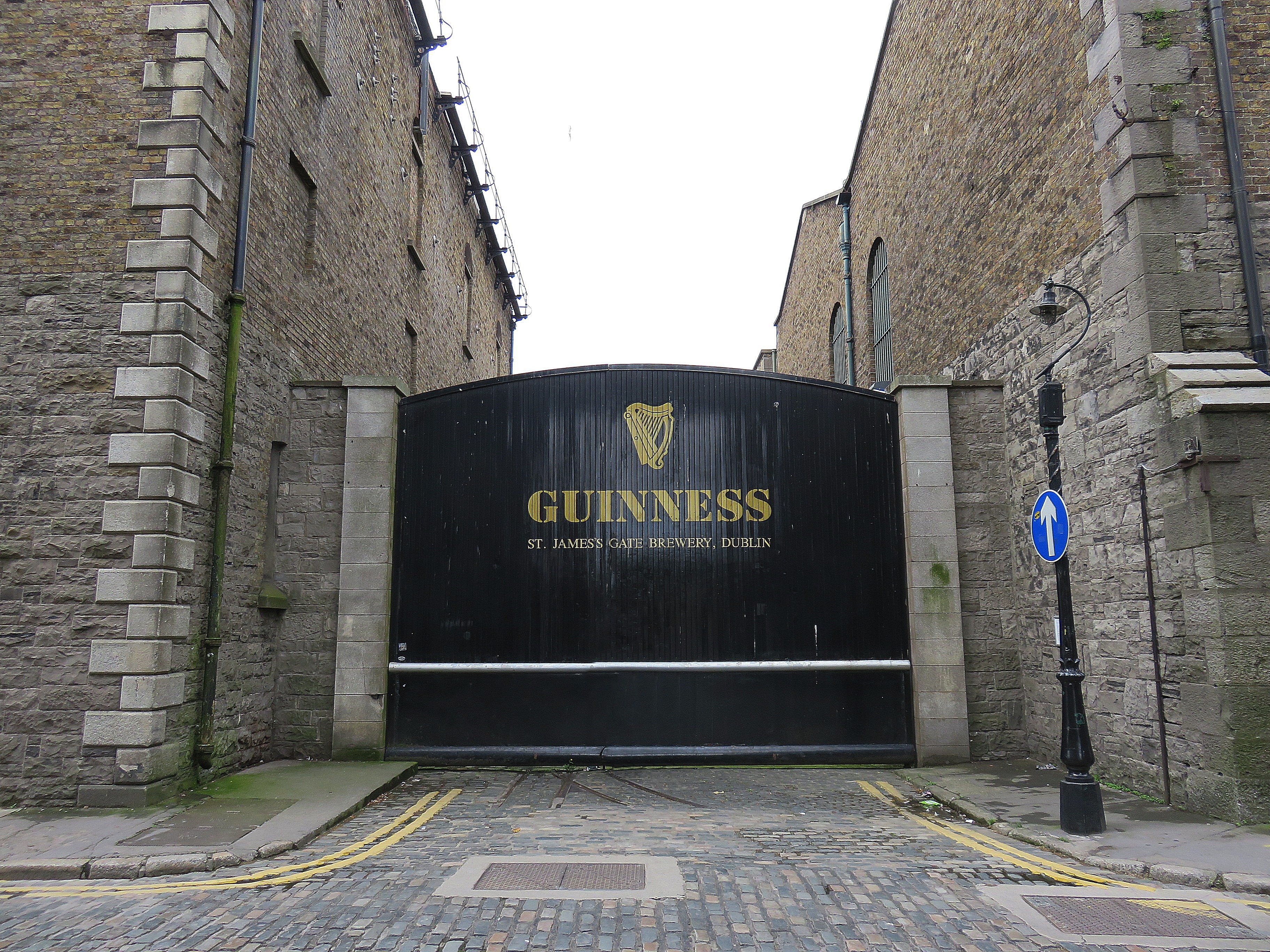 With one more day in Dublin before hitting the road, we had a tribute to pay and a pilgrimage to make.
The tribute was to the beautiful monument to one of the great Dubliners – a writer, a poet, a wise ass, and an outcast aesthete, Oscar Wilde. An intellectual, who was both, marginalized and celebrated in his lifetime, and adored and endlessly quoted after his death, Wilde was born in Dublin, and spent the first 24 years of his life in Ireland, before moving to England, where he met fame and ridicule, and later imprisonment and an untimely death. Not easy being a genius in England, it seems…

The monument, situated in the corner of Merrion Park across the road from the house where the great man was born, definitely does him justice – Wilde is portrayed lazing on a big rock wearing a green smoking jacket with a pink collar and a smirk on his face. The combination reflects Wilde’s famed colorful and flamboyant personality pretty well. The corner of the park, where the monument is situated is surprisingly quiet and represents a perfect spot to sit down, relax, recall one or two of Wilde’s famous witty lines and have a quiet giggle with a great man looking over you.
The tribute to the monument was, in fact, accidental – we had to locate the stop of a Wexford bus that would take us to Gorey and our motorcycles early the following morning. A helpful girl at the hotel reception pointed out several spots downtown, where the bus was supposedly picking up passengers, but was not too sure about the exact locations of said stops. Never the ones to rely on hearsay and risk loosing time and missing the bus, we went on a reconnaissance mission the day before, and located the bus stop right around the corner from the monument. Talk about two birds with one stone…

The main item on the day’s program was far from accidental – it was well planned, eagerly anticipated, and craved for. A pilgrimage to The Mothership, better known to the un-initiated as the Guinness Storehouse at what is probably the most famous Dublin address at St. James’s Gate. No house number, as none is needed – The Mothership takes up the whole neighborhood, and is signposted so well that only somebody completely devoid of all senses can miss it.

Now, we were warned that The Mothership can easily take a whole day off your visit to Dublin, and were fully ready to spend it there. Getting a bit ahead of ourselves – we stood true to our intentions: 6 hours wandering around, in varied states of Guinness intoxication was time well spent!

If the soul of Ireland can be found in a pub, the heart of the little green island definitely beats at St. James’s Gate – a 7-floor Disneyland for grown-ups, shaped as a 14 million pint glass of Guinness: a place dear to anybody whose grandmother owned an Irish setter, and absolutely sacred to those with even a drop of Irish blood in them.

We came prepared. Instead of lamely queuing up with the rest of the smorgasbord of tourists at the main ticket office, we proudly proceeded to the Information desk to inquire if by any chance they still had tickets for the “Connoisseur Experience” tour. Not only did they have the tickets, but the next available tour was starting in just 15 minutes!!!

We read about the “Connoisseur Experience” somewhere, and it was highly recommended by at least 5 of close friends, all born and bred Dubliners with years of Guinness drinking under their belts. The regular entrance price to the Guinness Storehouse is €20. It also includes a token for 1 pint of Guinness at the bar of your choice on premises. For just €30 extra, the “Connoisseur Experience” included a private bar setting, a trip back in time in said bar, tasting all 4 different varieties of the black gold (+ 4 pints!), a lesson in pouring a perfect pint at the Guinness Academy (+ one more pint!), and the standard pint token to use at your delight. At a regular price between €4.20 and €5.00 a pint around the island, you were breaking even AND getting new knowledge, skills and experience!.. We were more than eager to join the enlightened masses!

Our group of connoisseurs was predominantly of American-Canadian origin, with just the two of us representing the European continent and a couple of Chinese girls, randomly thrown in the mix. Two young couples in the group were celebrating a wedding anniversary and an engagement respectively. One of them was accompanied by the guy’s Dad who happened to be dry for the last 35 years and did not drink a drop of the good stuff, which did not seem to undermine his enjoyment from the experience.

The first stop was at a beautiful Connoisseur Bar in the bowels of The Mothership, decorated with various Guinness memorabilia (including the replica of the original portrait of Sir Arthur Guinness), dimly lit, and chilled to perfection. The 30-minute trip down memory lane and history of Guinness delivered by our cheerful and knowledgeable guide with a VERY sexy Dublin accent, who never stopped pouring the drinks and cracking jokes, was delightful and informative.

We learned that the Guinness Draught, currently the best-known, and most widely spread type of Guinness, was a relatively recent invention, created for the 200 anniversary of the brewery. Its creamy taste and the famous layered surge settling of the freshly poured pint is owed to nitrogen, as opposed to carbon-dioxide used in all other beers. Discovered in 1772, nitrogen was put to mass use and into production right before 1959, which presented a great opportunity for the Guinness brew masters in creating the unique new version of their celebrated product.
Even though Guinness firmly holds the reputation of a “meal in a glass”, it only contains 198 kcal per imperial pint, which is only slightly fewer than skimmed milk, orange juice, and most other non-light beers. Now, that’s a relief, because for me personally, Guinness leaves the feeling of being well-sated and having to skip dinner every single time!

Sir Arthur Guinness was definitely a visionary, and a very far-sighted entrepreneur, who signed a 9,000-year lease (who the fuck does that, anyway?!) on the 4-acre (16,000 m2) brewery at St. James’s Gate for an annual rent of £45. The lease, however, is no longer in effect because the brewery property has been bought out a long time ago, when it expanded beyond the original 4-acre site.

The 2nd stop on our tour was the Guinness Academy, where we were all taught how to pour a perfect pint. Nobody needs any instructions on how to drink it – we were all professors at that for sure! Turned out, pouring was not too hard either – all you had to do was position the glass under the tap at an angle that would make the nozzle touch the harp on the glass, push the tap towards you and pour. When the glass is about to spill its contents out, leave it alone, and let the Guinness settle. After a couple of minutes, put the glass straight under the tap, and push the tap in the direction opposite from you (Guinness taps are the only ones that work both ways) for just a couple of seconds till the glass is full. Voila!… We did just that, enjoyed our perfectly poured pints (we were getting slightly tipsy – this was our 5th for the day!), and gratefully accepted the official certificates, documenting our newly-acquired skills. We could not have been prouder!

Tipsy, but still vertical, we decided that a good meal was in order to prevent further drunkenness and consequential irresponsible behavior, and dined at one of the restaurants on premises on Guinness stew served with Guinness bread. It was fantastically delicious! With the food support, we enjoyed the Guinness advertising exhibition, admired the view from the Gravity Bar on the top floor, offering a 360◦ panorama of Dublin.  It was there, on top of the Guinness world, that we were found by the “dry” guy from our Connoisseur group, and presented with two extra pint tokens that for obvious reasons the guy could not use. That left us grateful, but confused – food support or no food support we were well into our 6th pints by now, and the surrounding world was slowly turning into a fuzzy and comforting backdrop… Nic’s Irish pride banner was riding high that day, so he cashed his token out at one of the resident bars, where we were enjoying the dancing show, combined with the meetup of a stag and a hen party – both well lubricated and ready for fun. I chickened out and passed my newly-acquired free pint, but thoroughly enjoyed the show.

The stag party was nothing out of the ordinary – a group of over-age guys in matching T-shirts with the name of the poor bastard who was taking the plunge. The hen party was something to remember, though – all the girls were dressed as old ladies: grey hair wigs, rollers, long frilled knickers, and brooms completed the picture. All were helpfully sedated by alcohol, that eased their pain a bit, and added to the fun of the moment. The meeting of two parties was hilarious – the guys from the stag night eagerly adopted the brooms, and even in their drunken haze looked lustily yet disbelievingly at the frilled knickers. It was a match made in heaven…

This was the exact point when we knew what to do with the extra Guinness token! There was no chance in hell I was drinking a 7th pint of the day, and although Nic was ready to sacrifice himself for the cause, a better use for it was found. We chased down the poor bastard who was about to tie the knot, and gave the extra token to him. How to make an Irishman happy in under 10 seconds?… Free beer is the answer!!!! The guy’s whole face lit up, he snatched the ticket without any further questions, and immediately started dancing and singing out loud the “I got a free pint!” song of his own making. Only in Ireland!…

On this happy note, we left the comforting insides of The Mothership, stumbled back to our hotel, and fell helplessly into bed. Not even the unbelievably loud noise from the pub downstairs could bother us – we slept like two newborn babies. Two newborn babies drunk on Guinness, but nevertheless! We were but hours away from the beginning of our road trip adventure!!!!