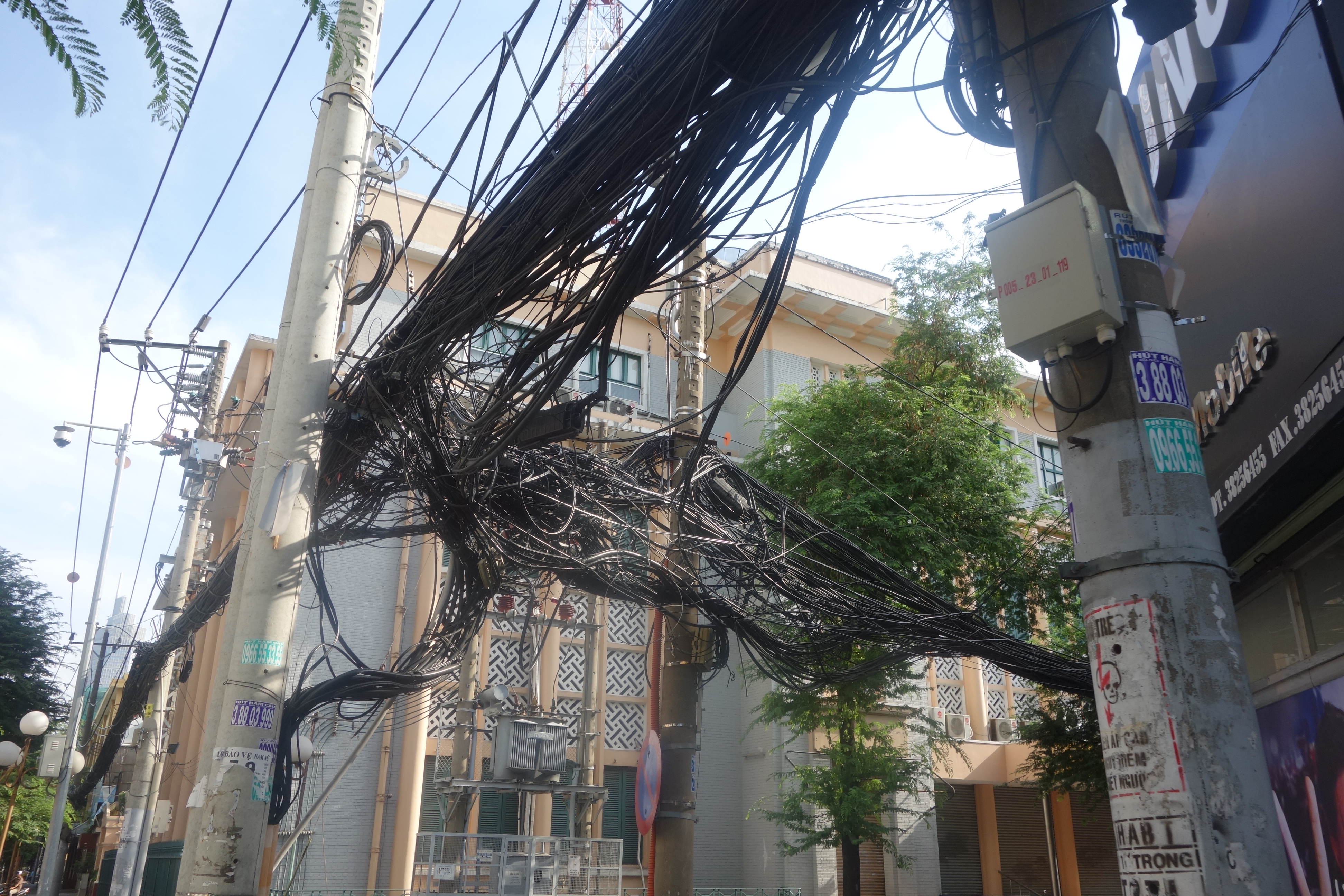 In addition to hard beds and narrow buildings, several other things stand out in Saigon to an observant eye.  The main one is definitely the mad traffic.  The number of scooters, mopeds and small motorbikes on the roads, carrying families, luggage, boxes, gas canisters, cartons and bags full of goods exceeds anything even Bangkok can boast of.  Together with cars, taxis and buses they move in a seemingly random, yet well choreographed chaos, rarely observing road signs or street lights.  Saigon traffic rules were well summarized on a T-shirt we saw in one of the souvenir shops: “Green – you can go, yellow – you can still go, red – you can go anyway“.  Two heavy lanes of traffic can easily flow into one another, and part smoothly, miraculously avoiding pedestrians walking among vehicles and crossing streets in random places.  Surprisingly, nobody gets hurt. Scooters and taxis loaded to the brim with anything imaginable make brave U-turns in the middle of a busy street, without disrupting the overall flow of chaos

The reason why pedestrians are walking in the middle of traffic is simple – pavements in Saigon simply do not seem to be meant for them.  Most sidewalks are filled with scooters parked three and sometimes four rows deep, plastic kiddies furniture of street food vendors, goods layed out outside by nearby shops – there seems to be enough space for everything, but people trying to avoid traffic.

The local telecom systems proudly hold the banner of chaos in support of traffic high, and even exceed the seeming disorganization (if it’s only possible) observed on the roads.  Just like in Thailand and Cambodia – the other two countries of South-East Asia that I chanced to visit by the time of our trip to Vietnam – electricity and communication cables hang along the roads in thick python-like bunches, supported by shaky wooden posts, and weave into a snake-crazed balls around the seemingly sturdier ones on street corners.  Looking at this cable chaos one is left to wonder how come they are not short-circuiting every minute, electrocuting innocent passers-by and leaving whole cities in darkness.  Apparently, this does not happen (or at least does not happen too often), and tele- and electro-communications seem to function. Every hole-in-the-wall place has Wi-Fi, and I won’t be surprised if the hand-pulled carts of street food vendors will soon start offering Internet access as well.

In general, Saigon made a much less commercialized impression than Bangkok.  It’s probably getting there, but not just yet.  Many travel books describe it as a place Bangkok used to be 10 years ago, and it’s probably true. There are people selling fake sunglasses and all sorts of tourist chachka on the streets, but they are not as pushy or aggressive as in Thailand, and on hearing “No, thank you” many even say “Sorry, have a nice day!“. English is generally known and spoken, and the variety of faces on the streets seems to be much wider than in Thailand.  Girls and women are very good looking – again, especially if compared to Thailand – where, as is well known, the best looking women are usually men.

Despite the fact that most people bravely criss-crossing the city on mopeds and scooters were wearing face masks, the air in Saigon seemed quite clean – there was no visible smog, and you generally didn’t breath petrol fumes unless inhaling directly from the exhaust of a city bus.  To be fair, though, this could be attributed to the fact that just a couple of days before our arrival, the tail of yet another typhoon that went over the Philippines swept Southern Vietnam, and substantially contributed to temporary eliminating the pollution problem.

We happened to be in Saigon in mid-December, right before Christmas, and even though we expected Vietnam‘s traditions to be quite far from Christianity, the seasonal bling-bling was everywhere.  Palm trees with fairy lights were lavishly interchanged with fake Christmas trees made out of silver foil, gigantic Christmas balls or (in case of a local McDonald’s) happy meals topped with a golden bow.  Rain deer figures, pulling sleighs filled with presents were seen all over the city, and giant paper-mâché snowflakes decorated the sides of buildings downtown. Why would a country that technically has never seen snow, keep pushing the winter paraphernalia and did not adapt the holiday to local standards, beats me.  They say in Australia Santa’s sleigh is pulled by kangaroos instead of Rudolf & Co…  Don’t know about local Vietnamese animals that can compete with that, but giant snowflakes on the streets definitely looked out of place.  I believe Santa would look quite good in a traditional Vietnamese straw hat, although I would not go as far as let him strip to bikini bottoms…  That would not be a pretty sight.

Thinking of out-of-place decorations, it was not Vietnam, but Cambodia that could boast the weirdest Christmas decoration we’ve seen so far.  When visiting Angor Wat last year, we spotted one of the posh hotels in Siem Riep that apparently ran out of deer figures, trying to decorate the not such a small lawn in front of the main entrance.  The management was far from the faint-hearted, though, and quickly rounded up the Easter bunnies to finish Santa’s procession.  The result was quite surreal, although impressive: Rudolf, leading a pack of deer and bunnies with over-sized Santa presiding on the sleigh – all sumptuously covered in fairy lights and bling-bling.