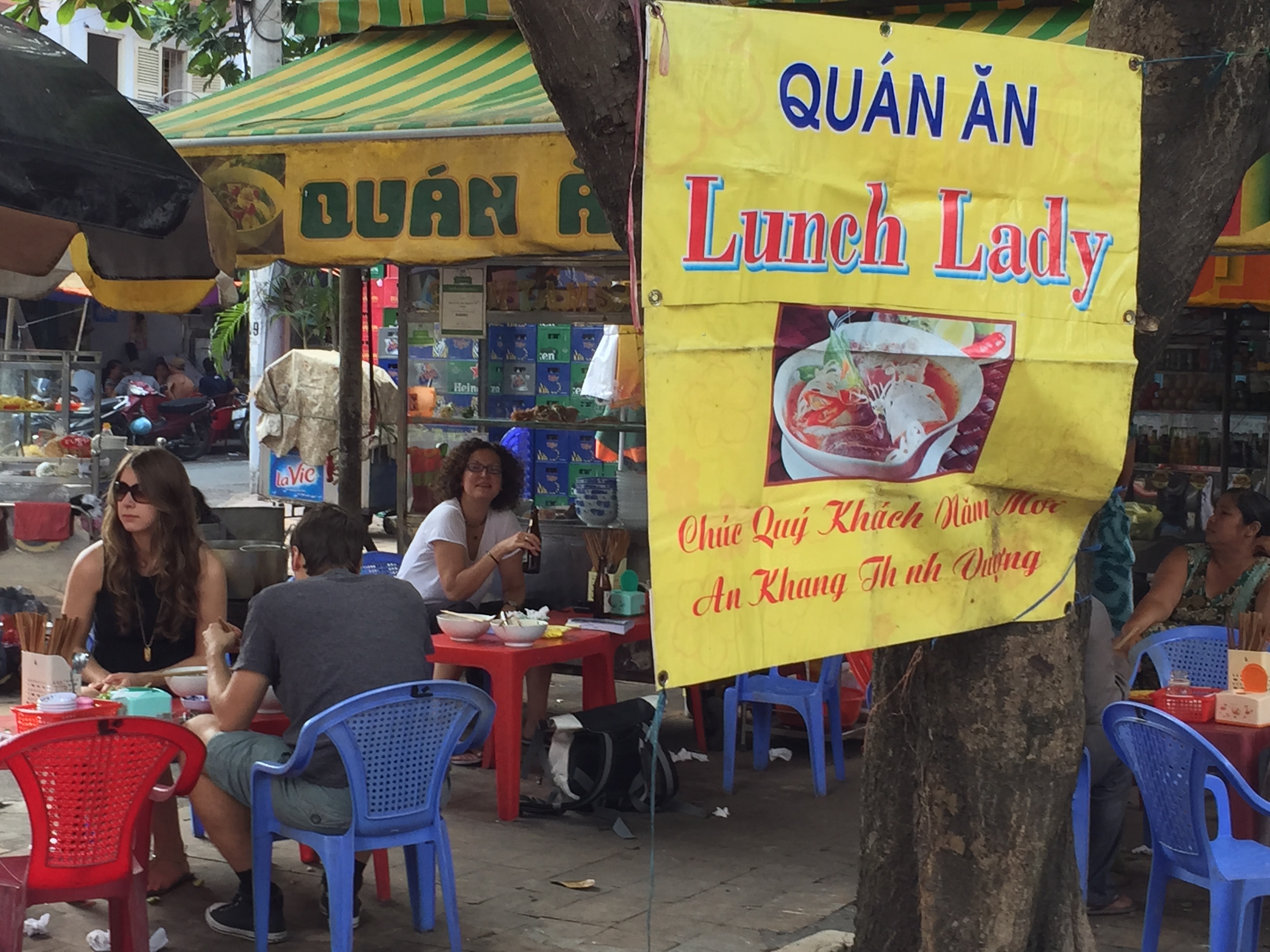 The plan for our first full day in Saigon was simple – explore the downtown and find The Lunch Lady, made famous by Anthony Bourdain, who filmed the Vietnam episode of his “No Reservations” TV show at her humble street stall back in 2009.

With a population of around 8 million people and divided into 19 districts, Saigon is a huge spread-out city, too big to explore in its entirety. Like with every big metropolis, though, you really don’t want to explore all of it.  Most attractions worth seeing are located in Districts 1, 3 and 5, and as we found out, some were more “visitable” than others.

First on the list was The Jade Emperor Pagoda – a must-see according to all travel books. A small “communal” pagoda, made up of several tiny temples gathered under one roof, also had a nice and peaceful garden and a terrapin pond. Terrapins were climbing over one another, and you could clearly see the human traffic rules of “the bigger one gets the right of way” replicating themselves in the reptilian world. One tiny guy was doing his best to climb around a big relative, who was blocking the path onto the narrow step over the pond, seemingly oblivious of his attempts. We watched him for ten minutes, till he successfully overcame the obstacle, and sat panting on top of the step. You could also buy a baby terrapin from a couple of smiley grannies at the gate, and set it free into the havoc of the pond, which supposedly does good things to your karma. Having seen how crowded the pond was, we decided the terrapin babies were better off with the grandmas.

The garden in front of the pagoda was green and peaceful, with inviting benches around the perimeter. The fountain in the middle, though, had a high canopy roof over it, aimed at protecting the fountain sculptures from the elements. A couple dozen pigeons found this to be a fantastic spot to practice synchronized target-shitting, and more than one tourist, not quick enough to admire the surroundings and duck into the safety of the pagoda, was seen fertilized enough to start growing prize orchids on their clothes right away.

The pagoda itself was dark, misted with incense smoke, and beautifully decorated with carved statues of various gods and deities – one per each “communal” temple inside. What spoiled the scene a bit, was the abundance of fluorescent day-lamps, some with coloured strobes, strategically placed over each little altar. They blinded every visitor, and made the interior look suspiciously like a mix between a cave and a disco. Candles, or anything else would have been so much better, but apparently the gods in Vietnam deserved the best, including all advances of civilisation and modern technology.

Next on our agenda was The Lunch Lady. She had already been popular with the locals, when Anthony Bourdain‘s TV crew stumbled upon her food cart in District 3, filming the Vietnam episode of their show. The Lunch Lady does not advertise and is not easy to find, yet culinary freaks from all over the world have been finding their way to her humble street cart ever since the show. I googled the address, located it on the map, and marked the spot in the book we carried around with us. Conveniently, she was supposed to be within walking distance from the Jade Emperor Pagoda, and despite a couple construction sites blocking the direct route, we found her.

Ms Nguyen Thi Thanh, aka The Lunch Lady, a plump smiley woman, known for her soups, now proudly decorates her corner food cart with the big sign with her moniker in English. There are no menus, and the stall is surrounded with little mismatched plastic tables and kiddies’ chairs, where the visitors are sitting with their knees over their ears and eat whatever the Lunch Lady cooked for today. She does not speak English, but that does not pose a problem – she ushers you to one of the tiny red plastic stools, and brings a bowl of soup, along with the condiments of the day.

In Vietnam soups with noodles, meat and whatever come to the table in a bowl, condiments like chili paste, limes, oil, etc. are already on the table, and the bowl is accompanied by a big plate/tray of fresh herbs to be put in the soup. You mix the condiments in a little dish, add them into the soup according to taste, then top it up with herbs, and off you go!

The soup of the day was delicious, and despite a couple of unidentified ingredients we emptied our bowls.  Ms Thanh was kind enough to allow me to take a picture with her – both of us on tiny little red stools: can’t get more Saigon than that!

Speaking of food vendors – you can’t miss them in Vietnam, for many of those selling bread or snacks on the streets have optimised their work in a simple, but rather ingenious way.  You can hear them from afar through recorded messages blasting out of the little speakers attached to their bikes and carts. The announcements are annoying, but effective. The funny part is that the voice on the recording does not always match the sex of the seller, and you have guys driving around on bikes with sweet women voices announcing their merchandise, or little girls with low-pitched male voice messages.

We said good bye to The Lunch Lady and walked back to the hotel through the old part of Saigon, filled with historical and literary landmarks.

Saigon’s central post office, designed by none other but Gustave Eiffel himself (yes, that same one who gave Paris it’s initially well hated and now much loved steel tower) is a sight in itself. Although the middle of the facade was covered with scaffolding when we saw it, the freshly painted wings of the buildings along with the impressive interior were definitely worth seeing. The metal constructions holding the balcony over the main entrance did not leave any doubt as to the authorship of the design. On the right-hand side of the building was a statue, suspiciously resembling that of the monument to “Worker and Kolkhoz Woman” – a symbol of the Soviet era, still decorating the main entrance to the Russian Exhibition Center in Moscow, and known to every person born in the Soviet Union as the logo of the Mosfilm, the main film studio of the USSR. I took a picture in front of the relic – just for old times’ sake.

The Notre Dame Catholic Cathedral next to it (could they have found a more French name?…) was equally impressive, but stuck in our memories not due to its architectural values (after all, you can’t possibly surprise Europeans with another Romanesque cathedral…), but with an unexpected parade of about a dozen Santa Clauses in front of it. Boys and girls dressed in Santa outfits were posing for group photos using Cathedral as a back-drop.  We could not figure out if it was a college graduation, a reunion party, or something else, but the sight of a big group of Vietnamese Santas in full gear in +30C heat was priceless.

We passed by the Continental Hotel, immortalized by Graham Greene in “The Quiet American“, the tall building of the Caravelle Hotel that housed international press corps during the Vietnam War (quite fittingly known in Vietnam as American War), walked through the pungent Ben Thanh Market, and overwhelmed by the variety of sights, smells and experiences reached the hotel and turned in for the night.