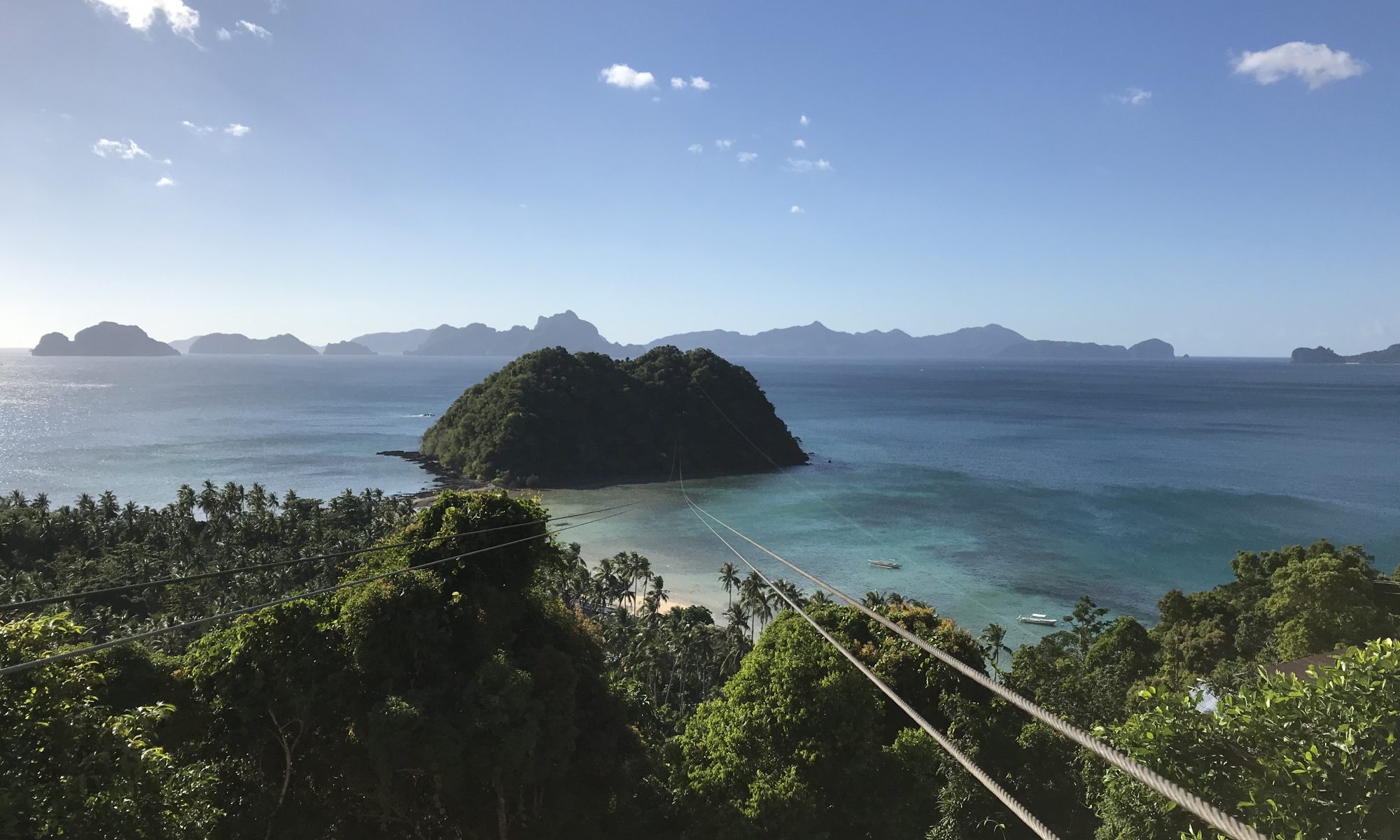 Having decided on El Nido being our last destination on this trip, we fell into the routine of island life quite easily.  A morning swim in the rooftop pool, a lazy breakfast in one of many nice places in town, and doing tourist stuff.  Which for us did not include buying useless shit, but consisted of exploring the area by any means possible.

During the first couple of days we walked around El Nido proper about 10 times (the place really was not that big), and having learned every street and bar, we decided it was time to go a bit further.  Our first venture out of town was on dry land.  The next mighty island steed was not easy to find, but we persisted, and our efforts were rewarded.

A run-down but still alive scooter with two helmets of equally advanced age were found and rented for the day.  We had several places on our list:

It took us about 30 min riding in the heat and relatively chaotic traffic in around El Nido, to get to Lio Beach.  It was, indeed, pristine and beautiful and even a resort, located right on it somehow did not manage to spoil it.  Maybe because mere mortals not holding residence at said resort were still allowed to trod the sand.  Maybe exactly despite of it.  We did not muse too long over the reasons, but were just happy to enjoy the white sand, the blue waters, and the relaxed atmosphere.  We braved the waters, and thoroughly enjoyed the long-awaited swim in the sea.  The water was warm and refreshing at the same time, and the mild wind on the shore kept the few tourists sunbathing on the beach away from the water.  We could not ask for more!

The plus point of the resort being there, was a beach bar/restaurant, where we had some lovely juices and tacos at a very reasonable price.  It looks like he resort was not trying to make all its money on food and beverage, and we were quite happy to allow the paying residents subsidized our snacks with paying heftily for their lodgings.

Refreshed and invigorated by the swim and the snacks, we moved on direction waterfall.  Remembering the lovely waterfalls of Siquijor, we were seriously anticipating this part of the program.  Especially considering the over +40C sweltering heat.  Within 5 min off the beach, the freshness evaporated and was replaced with the already familiar sensation of being in a hot sauna.

The roads of this part of the island left a lot to be desired.  The gravel track leading off the main road to where the waterfall was supposedly located (all maps we had looked quite different from one another, and the exact location of the waterfall differed by miles between them) was expectedly more adventurous.  We were navigating between potholes and huge rocks sticking out in-between them, and it took all Nic’s riding mastery not to get caught in any of huge dents in this track.

Finally, some hand-painted road-side signs indicated that we reached our destination.  The terrain was flat as a pancake, and no waterfall could be spotted with a naked eye, but we tried to be positive.  A cheerful and almost round woman cashed in 50 pesos off both of us for an entrance fee to the waterfall (even though there was no entrance to be seen), and provided essential directions: “cross two rivers, turn right after the 2nd river, cross three more and you are there”.  This started sounding interesting…  Considering the fact that the woman did not mention any boats or canoes, we hoped the river crossing would be done on foot.  But on the Philippines you never know…

We parked our mighty steed in the shade, and set off on our river-crossing adventure.  The first river presented itself shortly – it was a shallow, but wide and fast stream, with clear waters and an uneven rocky bed.  The cold water was a welcome respite for our tired and dusty feet, but we had to watch closely where we stepped, and made sure our flip-flops did not sail away.  Somewhere mid-stream we gave up, and took the flip-flops off – this helped a lot.

The narrow and at times barely visible hedgehog path winding through the jungle was market at places with colorful ribbons tied in strategic locations – without them locating the path would have been difficult, to say the least.

After trekking through the jungle and having crossed the promised 5 streams/rivers, we heard the first sounds of the waterfall.

The jungle cleared up, revealing another cardboard sign for the waterfall, this time quoting the entrance price of 100 pesos for two and an ancient man sitting under it, receiving said money with seeming indifference.  We did not argue, and coughed up the pennies.  We were the only visitors, and happily dipped our sweaty, dusty, and mosquito-bitten bodies into the cold waters of this well-hidden jungle cascade.

I have never felt so refreshed in my life!..  Invigorated by the waterfall coolness, we trekked back through the jungle in no time, and re-united with our mighty stead.  The cheerful round woman was nowhere to be seen…

The Zip Line, advertised all over El Nido as one of the main attractions/fun things to do, was next on our itinerary.  Technically, it was on the opposite side of town from the waterfall, so we rode back to El Nido for another good 50 minutes, past the already visited Lio Beach, and about 10 min outside of El Nido, huge commercially printed billboards left no doubts that the Zip Line was right there.

If we thought getting to the Waterfalls was a bitch, the day had a new surprise for us.  At least the waterfalls were reachable on relatively flat terrain.  To get to the start of the Zip Line, we had to climb up steep cliff on a narrow path with shaky wooden rails until our knees almost buckled and we were seriously out of breath.  On the top of the Zip Line platform we read that we just climbed almost 750 meters – we sure as fuck felt every single one of them!

Now, a brief detour into my personal history.  Somehow, having reached a respectable age of 40+ years, I have never, ever, been on a Zip Line.  Moreover, I had very vague ideas as to what it actually is.  Nic said it was a lot of fun, so I signed up.  After the trip up, that left me almost breathless, I started to seriously reconsider my decision.  Turned out – all for nothing!  Zip lining WAS a lot of fun!  True, you need to “sing for your supper” to climb to the starting point, but after that it was a piece of peace.  We were strapped into harnesses, given colorful helmets, and waved off “into the abyss”.

The abyss was full of light, with bright green treetops underneath, that quickly changed into the turquoise waters, separating mainland Palawan with the tiny Depeldet Island off its Western coast.  The views were spectacular, but the fun was over way too soon to my taste!  The guy on top warned me to keep straight and try not to turn around on the harness, but mysterious forces rotated me right at the very end, and I came to the end of the line back-first.  A huge firm cushion embraced me upon landing (this was not a euphemism for another cheerful and round Zip Line employee, but an actual big leather cushion, strategically positioned to welcome the arriving in the end of the line).  I was ready to go again, but timely remembered the tedious climb up to the starting point.  Probably, some other time…

Getting back onto the mainland Palawan could not have been easier – even though technically Depeldet was a separate island, it was separated from Palawan only by an extremely shallow sandy spit that was very walkable.  We enjoyed a stroll through the shallow clear waters, further up the Marimegmeg Beach, and up to the main road, where our mighty steed was waiting to take us back to our digs in El Nido. We spent another beautiful evening at Subasco, sipping their chilled wine (me) and beer (Nic), listening to their wonderful music, and shooting shit with our newly-found friend (the resident drummer of the band), who spoke great English, wore amazing long dreads, and rode a motorbike (proudly parked in front of the bar).