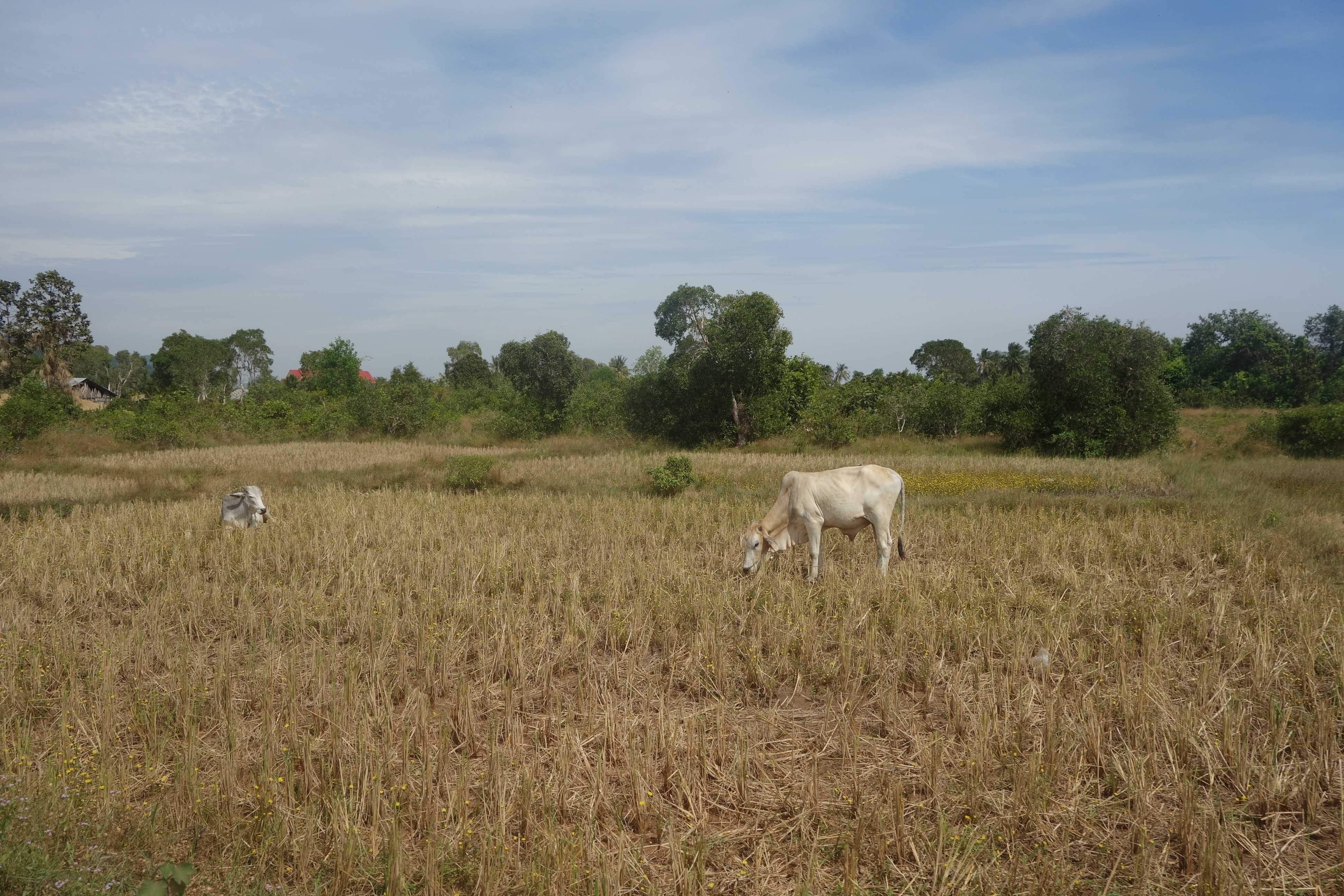 At 7 in the morning the following day together with 10 other passengers and luggage we were again tightly packed into yesterday’s mini-van, with the official seating capacity of 8.  People were sitting on top of each other, hugging their rucksacks and suitcases.  Total lack of any luggage compartment on the van did not help things much.  This gave the Israeli girl a perfect reason to start bitching again. All others were simply happy to be on the bus and pretended not hear her.

Even though the storm had passed and the boats were running again, the sea was still rough, and our morning ride on the hydrofoil was not overly pleasant.  The nose of the boat kept lashing up and down, and within minutes of such acrobatics half the passengers turned a tender shade of green, and rushed for the toilet.  The Israeli girl finally shut up for the rest of the boat ride.

On the coast, all passengers going to Cambodia were promptly packed into another mini-van, with an even smaller seating capacity.  To add to the fun there were even more of us now.  The van had a TV screen on the dashboard, showing soft porn.  This was an interesting change from Vietnamese karaoke we experienced so far.  Unfortunately the bus ride was very short, and we missed on the opportunity to follow the plot of the video.  We were unloaded at a small road-side cafe, that doubled-up as travel agency.  This started to look familiar.  Last year, when getting into Cambodia on a bus from Thailand, our visas were done in a very similar road-side cafe by a girl, stamping them into our passports with one hand, and frying noodles with chicken on a portable gas stove with the other.

This time fried noodles were off the menu, as there was no electricity in the cafe, and they could not serve hot food.  Their Internet was still working, though.  Go figure…

We handed in our passports plus 35 American dollars each, and were told to wait – the bus for Cambodia was leaving in two and a half hours.

The Israeli girl got over her sea sickness and started giving grief to the grandma at the counter, telling her she read in a book the visas should be 25 dollars, and not 35.  Grandma was just smiling and patiently repeating “Visa $35. No $35 – no visa“, which sounded very logical.  This time, all other passengers stood up in grandma’s defense, and explained to the girl that the visas were, indeed, $25, but if she read the rest of the book, in order to get a visa one also required an invitation from Cambodian authorities, and an application form filled out in Cambodian.  She was very welcome to obtain these on her own, or let the grandma earn her tenner by doing the paperwork.  After a brief but emotional exchange in Hebrew with her companion, the girl paid up.

The bus came on time, this time we did not even have to hug our luggage – everything fit in nicely, and we moved in the direction of Cambodian border.  Compared to last year’s madness at the Poipet border point between Thailand and Cambodia, this time the crossing was swift and painless.  We got off the bus, walked to the official-looking building, and waited, looking at the Vietnamese border officials staring at us with boredom through their computer screens.  In about fifteen minutes grandma from the roadside cafe whizzed in from nowhere on a scooter with our passports, which already held Cambodian visas, and bore exit stamps for Vietnam.  She ushered us through the Vietnamese border (the officials kept looking through their computer screens and did not participate in the process), handed our passports over to the Cambodian immigration officer, who simply distributed them to the owners.  The bus with luggage was already waiting for us on the other side.

We left the country of hard beds, smelly streets and litter on the roads, and were now in Cambodia!

Differences between neighboring countries are better observed on the road.  Everybody who ever drove from St. Petersburg to Helsinki will tell you that.  The moment you cross the Finnish-Russian border, the scenery looks cleaner, garbage on the sides of the roads disappears, and the trees and the grass seem combed.  The situation with Vietnam and Cambodia was exactly the same.  Right after crossing the border with Cambodia, the litter vanished, the colors became brighter, the scenery got livelier, and the people smilier.  It was again in stark contrast to our last year’s bus crossing into the North of Cambodia from Thailand.  Compared to Thailand the North of the country looked grey, dirty, people were visibly gloomier and unhappier.  Entering from the South, Cambodia was the new Thailand compared to Vietnam.

After just 45 minutes, the bus delivered us to a sleepy coastal town of Kep.  Or, as it was known in it’s better days, Kep-Sur-Mer.  The formed French resort could still boast white beaches, turquoise waters, lazy grandeur of the bygone days, and derelict empty villas, tucked into the surrounding jungle.  Three beers and one orange juice later, we secured our lodgings for the next two nights: a nice new Saravoan-Kep Hotel with a sea view and a Lavazza coffee shop on the ground floor.  Tomorrow was Christmas Eve, and we decided to treat ourselves.  The two cheerful Dutch guys, managing the place, eagerly shared that in the good old French Riviera days the hotel used to be a brothel, where wealthy Frenchmen and Vietnamese from the capital used to spend “working weekends” away from wives.  Humbled at such historic prominence, we took a much needed shower, and after the sunset with a refreshing cup of Italian espresso, set off in search of food.

The map, provided by the cheerful Dutch guys, had “Crab Market” written in big letters somewhere in the center of Kep.  That sounded about right. We were intent to find it, and eat all the crab we could lay our eyes and hands on. In the dark of the night Kep looked almost deserted.  Come to think of that – it can hardly be called a town at all…  Rather a small peninsular, with only a hint of a downtown at the place’s only beach, random houses scattered all over the area, often tucked away in the surrounding jungle in a not-so-obvious way.

The big road, that judging by the map should have brought us right to the market, looked utterly deserted, and to add to the fun of the evening, after about 10 min all lights in the area went off, and we found ourselves in pitch darkness, surrounded by the jungle.  We bravely continued on, supported by the flashlights of two iPhones.  The blackout did not last long, though, and after another 10 min walk the lights came back, and we finally made it to a turn that led us to civilization. Kep‘s Crab Market turned out to be an assortment of seaside restaurants, all offering fresh crab, proudly displayed in water tanks.  The crabs looked too good to eat – big, with blue legs, scurrying rapidly and hiding one under the other.

There is something stopping you from eating a creature you just looked in the face. Vegetarians might have a point there, after all…  Nevertheless, we guiltily dined on crab – they did look too good to pass on the menu – and walked back to the hotel in pitch darkness in the unsteady lights of iPhones.