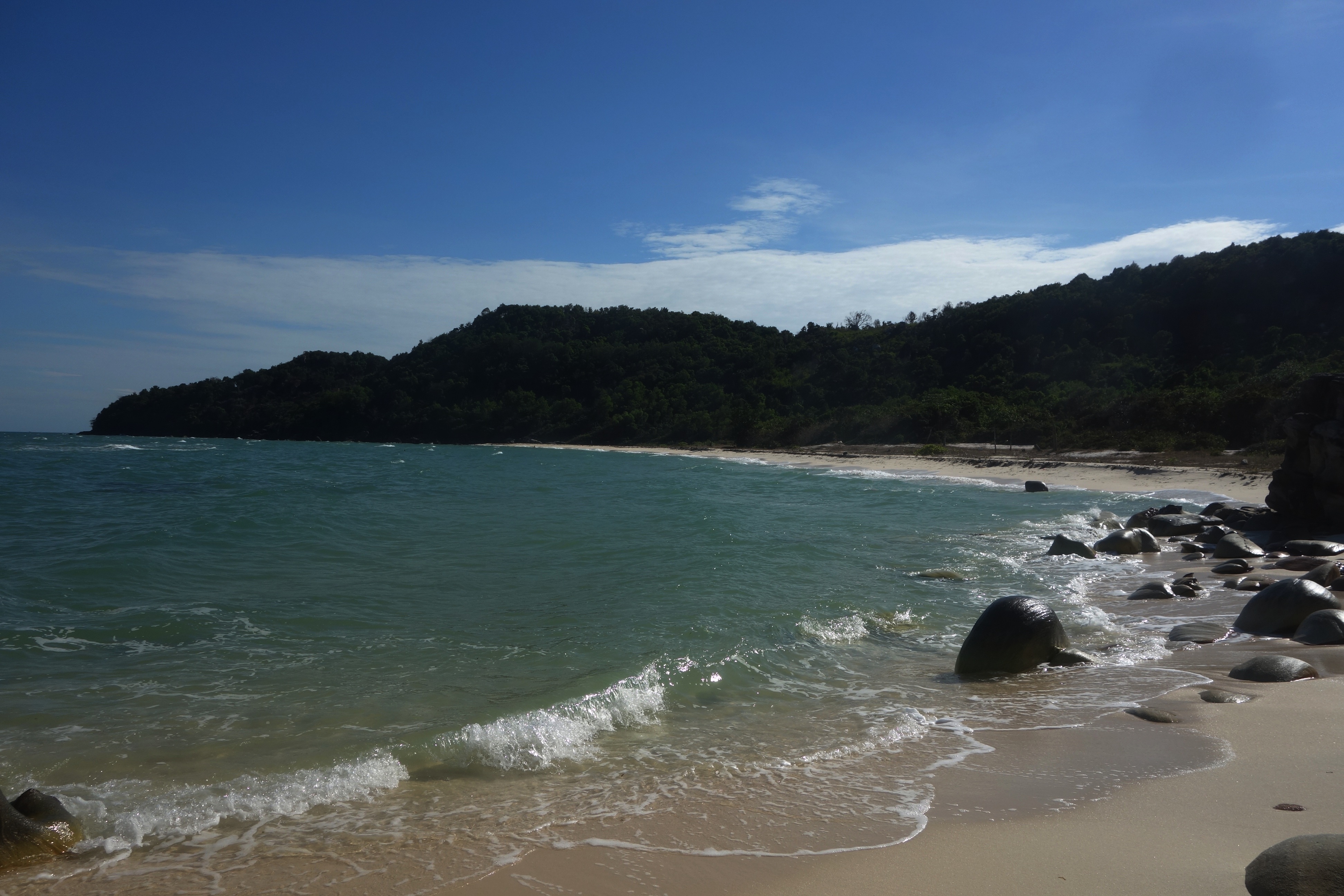 After a day of drinking on the beach with our new friends, interrupted by an occasional half-an-hour swim, we decided to explore the island. The good intentions were there all along, and as of yesterday we even had a scooter – Michele’s pushy sister-in-law, who apparently owned the motorbike side of the family business, badgered us into renting one for two days. We took the scooter just to avoid her pestering, and it spent the first day parked in the yard. On the second day we decided to put it to good use.

Like most rental vehicles in South East Asia our “mighty steed” had the engine power of a hairdryer, was at least fifty years old, and came with a teaspoon of petrol and two helmets. Having spent the teaspoon we had fruitlessly searching for a petrol station in the neighborhood, we were finally offered a big 1-liter coca-cola bottle full of green liquid by the same sister-in-law. Petrol in this part of the world comes in all sorts of containers, ranging from old glass rum and vodka bottles to plastic Coca-Cola and Sprite flasks. It is always brightly colored, and is sold by people piling them up by the side of the road in midday heat under tiny little umbrellas that don’t provide much shade. How this collection does not blow up just from the high temperatures – beats me.

Already on the way from the pier we noticed that in contrast to the rest of the country, the roads on the islands were in surprisingly good condition. This could be explained by the fact of some of them being tolled. However, even the toll roads did not last forever. They would go for quite a long stretch, and then abruptly end into a gravel/dirt path, that would stretch for a mile or so, before suddenly becoming paved again. As if somebody building the road got suddenly tired, said “fuck it!”, and walked the next stretch of the road, before deciding to start again. The gravel stretches were busy with roadworks going on in the middle of the traffic, and tackling big gravel trucks and steam rollers on a scooter was an adventure in itself.

Here a word has to be said about Vietnamese road construction practices. The country may be third-world and all, but somehow, even they figured out that simply pouring oil on the tarmac and spraying it with gravel, hoping that the cars will do the rest of the work and turn this mess into a proper road, would not work. That’s more than you can say about New York State, where, based on my experience, oil and gravel concoction on the roads was a regular practice. That fucks up everybody riding a motorbike, but what do we care – we save on the price of a steam roller!…

We went searching for a beautiful beach on the other side of the island, and after a couple of wrong turns (the map reflected the terrain only in a very approximate way), we found it. The beach was gorgeous, with picturesque rocks scattered around the sand, and surprisingly not overrun by people. It was definitely windier on this side, though, so you felt chilled enough to not want to dip into the water. After taking tons of photos we started on the way back, this time taking a coastal road along “our side” of the island, hoping for more spectacular views. We were in for a disappointment, though.

The whole Southern tip of the island was completely barren. With only a random shack every 5 km or so. It would have been beautiful, had it not been for the litter. Piled on both sides of the road, and scattered all over the beach, paper, plastic and all sorts of shit densely covered almost every square inch of the surface. This must be a socialist thing – the amount of garbage we have seen in Vietnam could only be surpassed by places back home. Somehow, it seems that other types of social/political/whatever structures are much less encouraging of litter. We’ve been to kingdoms, republics, democracies, what else, and even though garbage definitely existed there, it was not so much in your face.

I have to admit that I am not being completely fair here, though. Political structures aside, I guess the main reason is that in places where people have to first think about basic survival and making it through another day, environmental issues are not on the top of their agenda. Making do, and putting food on the table comes first, and nobody thinks twice about throwing plastic bottles and empty cigarette packs out of the window. Back in the Soviet-, and early post-Soviet days, the logic was the same. When visiting foreigners talked about pollution, recycling, or green energy, these issues were viewed as luxury pastimes of rich people, with nothing better to worry about.

The beaches on this part of the island won’t remain littered (or for that matter deserted) for ever. The stretch of land further down the beach was one enormous construction site. Developers have already moved in – Sheraton, Novotel, Sofitel – they were all there, hungry for their piece of action. The posters surrounding development areas were promising tall constructions of glass and steel with roof-top pools, and acres of fancy bungalows. On the one hand, it made you cringe at the “civilization, destroying the last un-touched piece of Paradise”, on the other hand, the Paradise was covered in shit, and people had no jobs or money. Along with standardized luxury and fucked up prices, development is likely to bring employment and clean streets.

On the way back, we also spotted the best Santa of the season – a shop mannequin with fake beard in Santa’s outfit, sitting on a stone horse monument of sorts. He looked proudly creepy and scary fascinating at the same time. So far, most Santas we’ve seen in Vietnam, were all playing sacsophones. No idea why – there weren’t many Sacsophone-playing Santas in either Europe or America. Must be an Asian thing…

It was time to say good bye to the island, though. We bought boat/bust tickets to mainland from the two sisters, running the place we were staying at, being once again amazed at how different they were. The “motorbike” sister was all business-like, and did not mind pushing you to buy stuff off her or overcharging you for it, while Michele’s wife (who was really beautiful, by the way) was sweet, quiet, and almost apologetic when doing business with you.

Anyways, the plan was to be picked up at the guest house at 10:00 by a mini-van, take the hydrofoil boat to Ha Tien on the coast, cross into Cambodia, and be dropped off at Kep – an old French Riviera of Cambodia. As always, plans and real life had much in common, but weren’t quite alike. When we arrived at the pier the next morning, the boats did not run. The storm was coming, and the boat that just arrived from mainland apparently had a rough ride, and weren’t in a hurry to repeat the experience. Most passengers of the van took the news philosophically, and were eager to be dropped off back at their respective guest houses, and try again tomorrow, as the driver apologetically offered. Most did not constitute all, though. A tall and very beautiful Israeli girl, accompanied by a butch and quiet guy, started giving shit to the driver already on the way to the pier. “Why don’t we have tickets to the boat on our hands?“, “When will we get them?“, “Why are we driving around picking other people up from their hotels, when we can go straight to the boat?“, “What do you mean – no boat???“, “We need to go NOW!“, “I want to be on that boat!“, “Take me there!” The driver’s limited English did not simplify the communication process, and both he, and the rest of the passengers were getting visibly frustrated.

The sea did not look too rough, but we were sure the boat captain knew better. We were all on vacation, and weren’t in the mood to tackle stormy seas, or argue. When the rest of the van ganged up on the girl, saying she was welcome to stay at the pier, but we were all going back, she got on the bus, but kept bitching all the way to the guest house. We sure did not envy her butch companion, for he would never hear the end of it. He probably was used to this, though…

Having happily reunited with Stevie and Cliffy on the beach, we celebrated our one more last day on the island with dinner and wine. Two other newly found beach friends, John and Georgina, joined us for the occasion. Dinner turned to after-dinner cocktails, then a pool game in a nearby bar, and before we knew it, we were stumbling back to our bungalow at half past two in the morning. Even Michele was nowhere to be seen, and must have already turned in for the night.