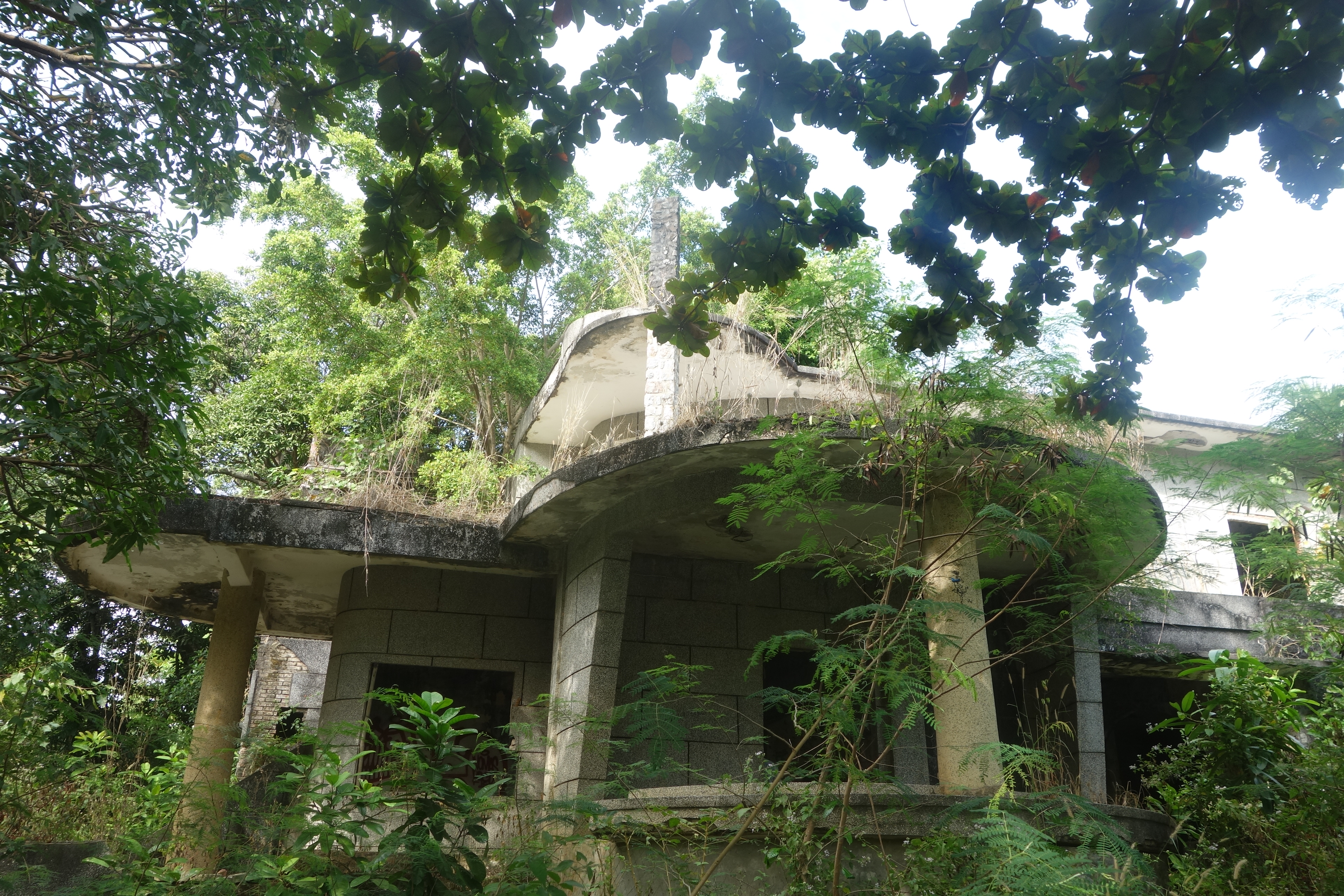 On recommendation of our Dutch hosts, we made reservations for Christmas Eve at the fancy local Sailing Club.  They were throwing a mega Christmas seafood barbecue party in a restaurant on the shore for an exorbitant by local standards price of $20 per head.  We were now officially part of the local dining elite!

But before the evening, we intended to scout out the area.  Even though according to official sources, the town of Kep had a population of 36 thousand people, it was hard to tell where they were all hiding.  The place did not look overpopulated by any stretch of imagination. In addition to the already visited and admired Crab Market, the map promised a pepper plantation, and some sort of a ghost town of abandoned villas.  They were all on our agenda for today.

The hotel boasted a beautiful swimming pool, that we were hoping to enjoy later, but in the morning it became a set for a rather unusual show.  The area was swarming with monkeys, who we briefly spotted the previous evening – they were raiding the garbage cans in the neighbourhood, and stalking people on the road.  In the morning, the three most adventurous ones of the gang came to our swimming pool for what looked like their daily ritual.  They gathered at the corner of the pool, that bordered on a protective wall covered with greens and flowers, and scouted the area.  Not seeing any worrying signs, they each took a refreshing drink from the pool, splashed some water on their faces, and smugly sat on the brim, visibly content with themselves.  The two younger ones started getting fidgety very quickly, though.  They ran along the brim of the pool a couple of times, and then took well-choreographed dives into the pool one after the other.  Refreshed and empowered, they sat on the corner, basking in the rays of the morning sun, chatting amicably.  The older one was still indecisive about a swim.  He kept dipping the tip of his tail into the pool, with a doubtful face of a scientist, conducting an experiment he knew was bound to fail.  He obviously was not convinced that the water was too warm for him just yet.

We observed all this from behind the big potted tree on the other side of the pool.  Our enthusiasm about the afternoon swim diminished slightly, but the monkey swim show was very entertaining.  We moved on in the direction of breakfast, and the monkeys jumped onto the adjacent wall, and disappeared into the jungle.

When we excitedly shared the monkey story over our morning cappuccinos with one of the managers, he did not seem to share our joy, and just gloomily muttered “These bastards!…” Turned out, there was an ongoing war between the monkeys and the two Dutch guys. The former liked their morning swims in the pool, totally ignoring the wishes of the latter to keep the pool for the paying customers. The monkeys were clearly winning, though. Trying to keep them away, the Dutch guys already lost their WiFi connection for a week, when the monkeys, upset at being shushed away from the pool, tore out the hotel’s Internet cables. By the time we arrived at Kep, the feud seemed to have reached the Cold War stage: the monkeys behaved as though they owned the place, and the Dutch guys pretended not to notice them, hoping that neither would the customers.

We took our time enjoying the monkey show and the cappuccinos, and when we were ready to make a move, all the scooters in the area seemed to have been rented.  This did not prevent us from exploring the area, though.  One of the Dutch guys quickly telephoned a couple of neighbors, and secured us a Tuk-tuk for the “not screw me in my ass” price (his words).

On the way to the pepper plantation we stopped by something I never thought existed – the swallow nest factory.  It was a tall concrete building with tiny holes for windows on the very top, standing in the middle of a huge field, with nothing close-by, and upon approach we understood the desolate location.  From within the building came unbelievably loud chirping noise, made by hundreds, if not thousands of birds.  Our Tuk-tuk driver explained to us, that swallow nests were an extremely profitable business.  Chunks of clay and straw, cemented together by the birds’ saliva and shit were sold for up to $400 a kilo to neighboring China, where it was considered a delicacy.  That’s the weirdest business enterprise I have ever seen or heard about!…

The pepper plantation was owned by an elderly German guy, and in addition to pepper per se, had acres of fruit orchards with mango, rambutan and durian trees.  None of the fruit were in season yet, but we were happy at the chance to get to know more about the peppers from the plantation’s agricultural manager, who also doubled up as a guide.  I have seen plenty of paprika and chili plants, but somehow, never thought about what regular black and white pepper corns grow on.  Turned out, that green, black, white and red peppers came from one and the same plant, that looked a lot like a vine.  The color depended on the maturity of the peppercorns.  Green were the youngest, harvested right after forming; red were the medium-aged ones, hand-picked from the peppercorns as soon as they started ripening, usually one or two per cluster.  Black were the ripened and mature ones, and white were the skinned, washed, and dried black ones.  Quite interesting, how such a wide variety of colors and tastes came from one and the same plant.

Pepper vines take 7 years to mature and start bearing “fruit”, but the peppers then can be harvested all year round, as the plants never stop blossoming.  They have to be shaded from midday heat – completely when they are young, and at least partially after they mature, so the whole plantation was covered by elaborate sheds made of palm tree leaves.

However, the strongest impression of the day was yet to come.  It was the ghost-town promised by guide-books, integrated into the town of Kep.  In the good old days, Kep was the French Riviera of Cambodia, attracting the rich and wealthy, that streamed there for their weekends, summer vacations, and retirements.  It was that same thing, however, that brought in the town’s demise in the dark Khmer Rouge years.  Embodying everything the new regime hated and wanted to destroy, Kep took a serious blow: the wealthy residents were rounded up, and shipped to the Killing Fields of Phnom Pehn, and their villas were looted, burned, and blown up.  The few that remained were in a pitiful state, their darkened carcasses sticking out as sorry remnants of former grandeur.

All villas in the area were built around mid-20th century, and some boasted very modernistic lines.  Several of the better preserved ones were occupied by squatters, who tried their best to make their adopted residences look deserted to avoid any problems.  Some buildings have been taken over by the jungle, and the trees and vines sprouted through the empty window frames, spreading their roots all over the remaining floor surface.  These new invaders made the villas look surprisingly alive – even if the intended residents were no longer there, life continued between the walls of the buildings, and the jungle embraced them as part of itself in an endless continuation of the circle of life.  In their best days the villas must have been impressive with all the swank and glitter of the parties they housed.  However, even in their demise these architectural gems managed to keep their face, and reinvent themselves in all the pride and glory they could summon.  The sun setting over the eerie villas, primly propped against the jungle backdrop in the afternoon heat spiked with the mad buzz of crickets and cicadas was one of the most cherished memories of the trip.

We dined on spectacular seafood barbecue spread at The Sailing Club, with Christmas songs sounding exceptionally out of place on the tropical beach, and a poor skinny Cambodian guy in a fat suit desperately posing as Santa Claus.  He gave up trying to sing to the music, and instead was teaching the kids the moonwalk dance.  The restaurant was decorated with fairy lights, tables spilling out into the sandy beach adorned with candles, and big fat geckos hiding behind doors and ceiling lights were accompanying the music in their surprisingly loud voices.  You can’t wish for a more perfect Christmas Eve than that!…