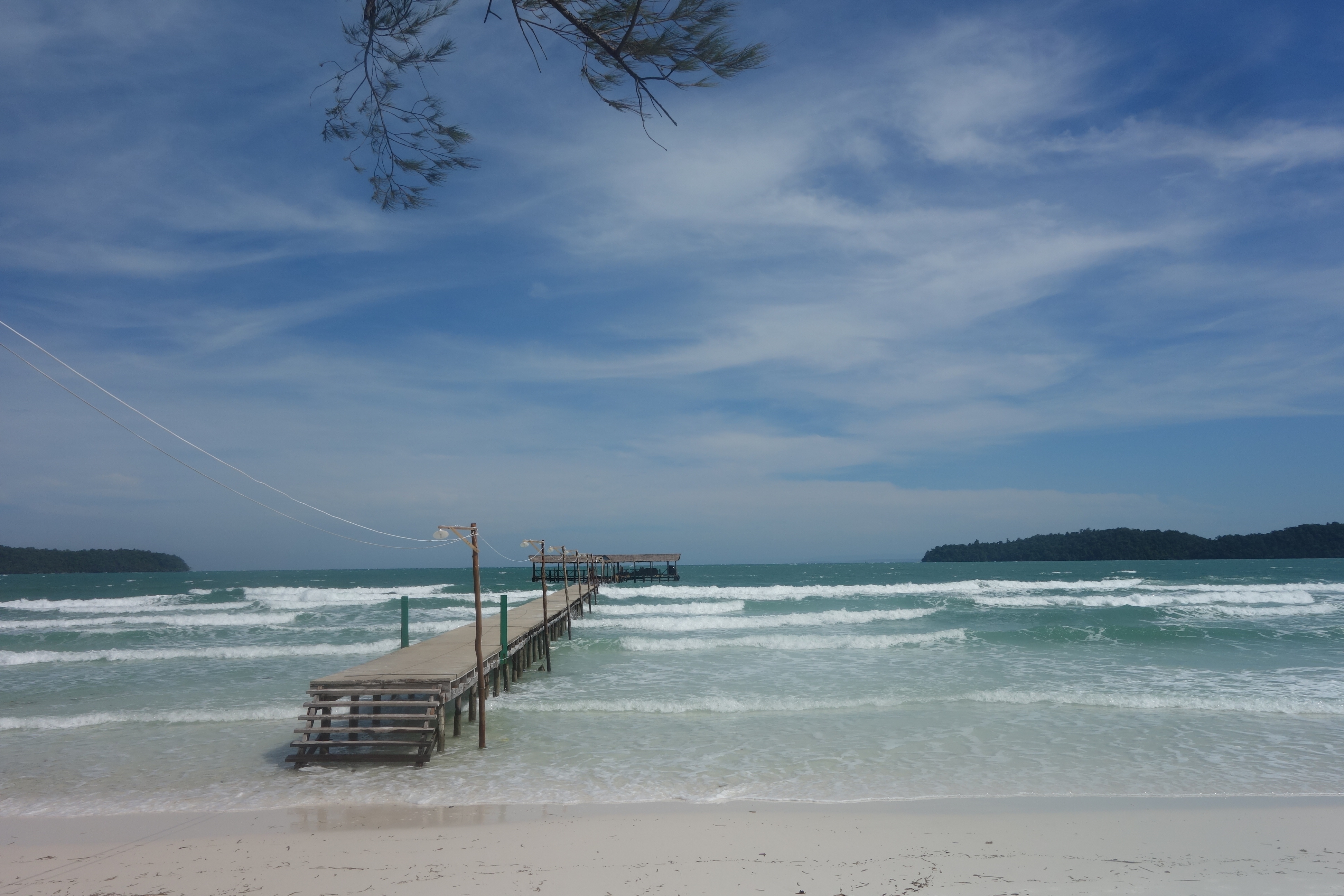 Even though Otres Beach seemed to have rehabilitated Sihanoukville in our eyes, we were still in search of THE ultimate beach spot. With tourism and development embracing Thailand in a tighter and tighter death grip, these days it’s at the less-traveled destinations of Vietnam and Cambodia where one can still find islands with pristine desolate beaches and breath-taking sceneries. We intended to find those before civilization moved in at full swing.

Twin islands off the Sihanoukville Coast, a bigger Koh Rong, and a smaller Koh Rong Sanloem, seemed to hold just the “Lost Paradise” promise we were looking for. We put our money on the smaller island, packed up, and boarded the speed boat the following morning.

Koh Rong Sanloem did not disappoint – the horseshoe-shaped island boasted a long stretch of snow-white sand called Saracene Beach, three piers (of which only one could be used in windy weather), and only a handful of places one could stay for the night at. The island was privately owned, had no Internet, and electricity from 6 pm till midnight only. Private ownership definitely stalled the development a bit, for in order to rent the land and build anything one should first get the permission. Judging by the current situation with hotels on the island, only about ten people managed to track down the owner and get their permits. Hats off to persistence – much as we googled, we could not find any information on the identity of the owner. But then, island-owners probably don’t advertise much…

Even though we landed on Koh Rong Sanloem in the peak of the tourist season, right between Christmas and New Year, luck was on our side, and we again found very decent accommodation for the two nights to come. Our straw-covered bungalow stood right on the beach, had a big bed, functioning shower, and even boasted a resident pet – a colorful decent-size gecko with inquisitive eyes, sprouting red and green spots on grey skin, living on the shower curtain. He was a quiet and well-behaved neighbor – kept pretty much to himself, never setting foot outside the bathroom, and mostly sticking to his favorite spot on the shower curtain, happily munching on mosquitoes and flies, careless enough to fly by.

I have to admit – falling asleep in darkness to the sound of the waves was extremely soothing, and there was something unbelievably and ultimately decadent to waking up looking at a white sandy beach with no signs of civilization, and clear blue skies mirrored in the turquoise waters of the South China Sea!… If only every day could start like that!…

Saracene Beach faced East, and there were no spectacular sunsets our side of the island. Judging by the maps, though, a sketchy path going through the jungle that covered most part of Koh Rong Sanloem, led to the Lazy Beach on the opposite side, full of romantic sunsets. The path was not easy to find, and was even harder to follow: snaking through the jungle for miles, with tall trees completely blocking any daylight, it was intersected by a number of streams, with only shaky wood planks for bridges. The jungle was also slowly but steadily creeping back in: roots of the nearby trees were coiling across the path, and tree stumps were sprouting new growth right in the middle of it. Dark and inaccessible as the jungle seemed, it was full of life – as we moved in, we could hear millions of crickets going at it at full swing. They seemed to group around certain trees, and the sound would increase and subside, as we walked on. Starting at a high pitch of an over-boiling whistle kettle, it progressed to the levels of a car alarm, before dying out at a low annoying squeak of a cell phone.

The sunset on Lazy Beach was spectacular, but we had to hurry back – even though we had our flash lights, the prospect of walking back through the jungle at night did not seem too appealing. Something was telling us that crickets were not the only inhabitants of the forest, and we were in no hurry to meet any others, be they monkeys, coconut scorpions, or any other of the exotic, but unwanted variety.

The two days on the island passed really quickly – we woke up to the sound of the waves, walked along the beach, read books in hammocks, and dined in the island’s only restaurant. The restaurant had surprisingly good wine on the red/white variety menu, a breath-taking view of the Saracene Beach, and a ceiling populated by a couple dozen colorful geckos. Dishes were coming out of the kitchen in a randomized order, and on both evenings we eat there, they were cooked completely differently, often not resembling the description on the menu at all. The food was delicious, though, geckos provided steady entertainment, and a beach bar on the way to our bungalows, offered great drinks with a fantastic sea view.

After two days in Paradise, we were back in Sihanoukville. It was two days to New Year, and we decided to stay put, before venturing into the capital, Phnom Penh. Turned out, Sihanoukville was the place to be. Apparently, all locals have gotten the memo, and the town was swarming with holiday-makers from all over the country, coming for New Year celebrations on the coast. Cambodians celebrate New Year long and loud. Festivities start on the 29th, and last for three full days, before culminating and terminating at midnight on the 31st. We came back right in the middle of the big party, and were surprised at the town’s transformation. Over the two days we were away, its population quadrupled, and the amount of Christmas bling-bling reached dangerous proportions. This time accommodation was in high demand, and the only place we could find was downtown (The OC Boutique Hotel), uncomfortably close to the main party zone. The moment the sun went down, the loud tums-tums of the party beat could be heard even by the clinically deaf. People were partying, eating, drinking, dancing and picnicking all over, with thousands more arriving every hour. Families of ten were packed into regular-size sedans, giving a lift to a dozen neighbors sitting in open trunks in the back.

Closer to midnight, the town turned into pyrotechnical mayhem. I am sure those people were stocking up on fireworks throughout the year, saving up on food in order to buy the best and the loudest petards, rockets, and what else. At around 11pm on the 31st the mayhem reached levels at which you could no longer hear yourself think for the non-stop loud banging of petards, and could barely see the surroundings for all the smoke they produced. Miraculously, at exactly one minute past midnight it all stopped, and people started leaving the area, blocking all streets, roads, and goat paths for hours to come. The party was officially over.