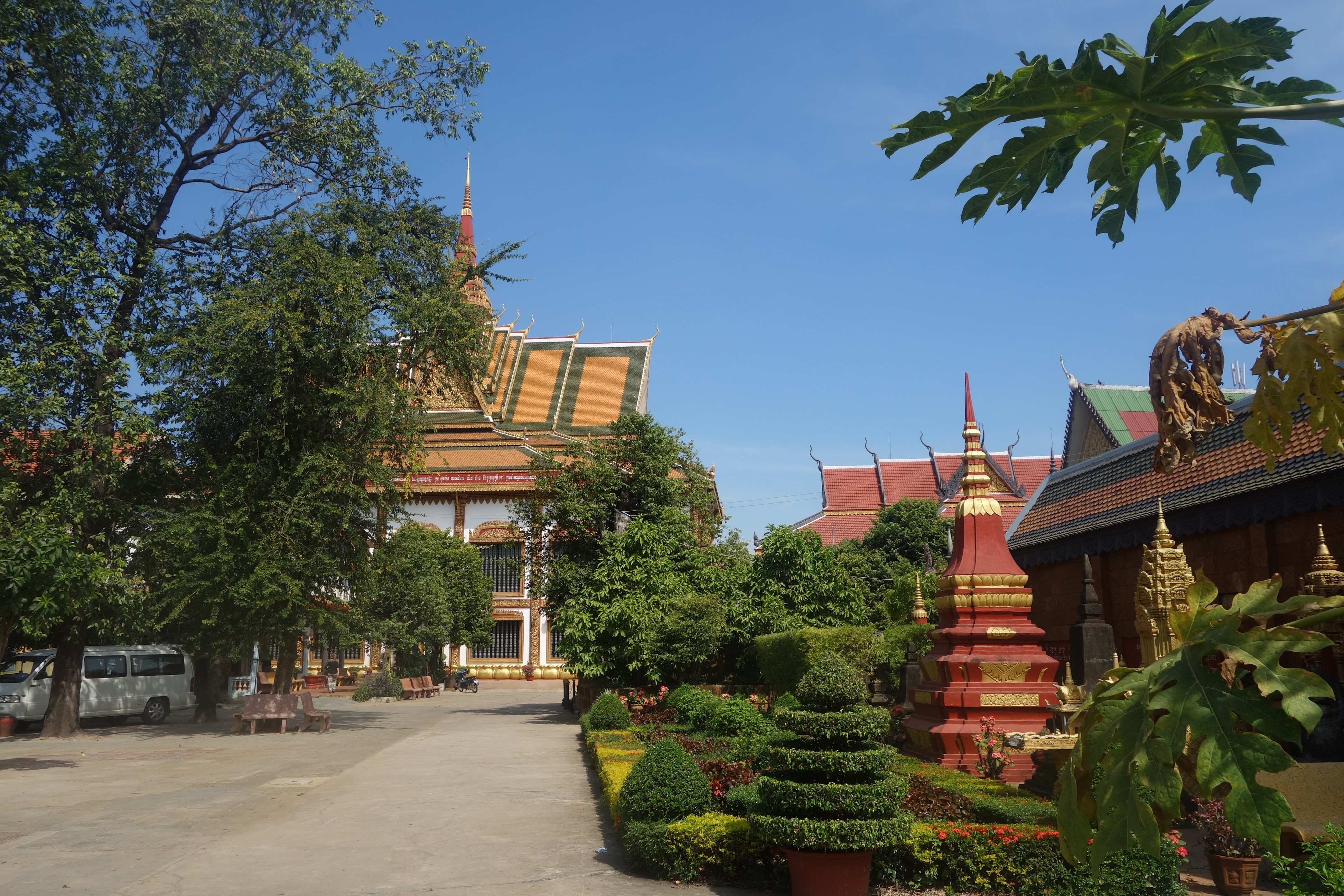 On New Year’s Day, we boarded yet another bus in the town that looked suddenly deserted, as most party-goes departed during the night. Our destination was Phnom Penh, the capital of Cambodia, laying inland, 3 hours away from the coast. With vacation time running out, we had to start zeroing in on our departure destination, Bangkok, and make sure we catch our return flight at midnight on the 4th of January. The easiest way to do so was to fly there, and Cambodia had two airports on offer – the capital, Phnom Penh, a 3-hour drive away from the coast, and Siem Reap, a more daring 8 hours away. We opted for the capital, and from there moved by air to Siem Reap, where we said good-bye to Richie and Andrea, who had four days more and planned to explore Angkor Wat that we visited last year. From there, in order to avoid any mishaps, we already had a flight booked, that would take us further to Bangkok.

The luxury mini-bus that we paid extra for, picked us up from the hotel, but was quickly exchanged to a regular run-down vehicle, with luggage piled up at the front, and passengers sitting on top of it. No amount of protests from the motley international crowd collected from nearby hotels could change anything – we were welcome to take the bus offered, or stay in Sihanoukville. Ok, we were pretty lucky bus-wise throughout the whole trip, so one minor hiccup was not going to spoil it.

The promised 3-hour drive stretched into 5, of them at least one and a half was spent crawling through the traffic in the capital. By the end of it we were very glad this was our last bus ride this trip. Having been uploaded in the middle of nowhere, we skillfully located ourselves on the map, calculated the Tuk-tuk price to the nearest cluster of hotels, and successfully negotiated the ride there. After that the story repeated itself: girls sat at the bar with luggage and drinks, boys scouted the area, and half an hour later returned with the keys to the rooms. The hotel (Hotel Landscape) looked a bit run-down, but the rooms were surprisingly nice: spacious, and the beds seemed to be made of a softer type of concrete, than in the rest of the country. Hooray! Radio and disco lights in the shower cubicle were a bit of an excess, but overall, we were very happy with the newly-found accommodation. Turned out, it was also within walking distance of the Royal Palace – the main attraction of the capital that was on our agenda for the next day.

But before starting on a beaten tourist track, we had a rather unconventional thing in our plans. Our Lonely Planet said that those who really wanted to help the country and the people living in it, were much better off not giving five dollars to a kid on the street, but should rather help Cambodia’s medical system by donating blood. Apparently, there is a strong stigma in the country associated with blood donation, with most Cambodians believing that it would make them weak and unfit for days and weeks, so the hospitals in the country experience permanent shortages. The guidebook encouraged everyone to do their bit, and assured that there was nothing to fear. This sounded like a really good thing to do, and we even responsibly stayed away from drinking the night before.

The Blood Transfusion Center was not hard to find, but looked utterly deserted when we showed up. We walked around, making as much noise as we possibly could, and after about fifteen minutes of knocking on doors, a surprised lady in a white coat emerged from behind one of them. She obviously did not expect visitors, and looked almost shocked when all four of us expressed readiness to give blood. After about a dozen questions as to why we, foreigners, would want to do something that most locals shied away from, she seemed convinced in our good intentions, distributed forms for us to fill out, and throughout the whole process continued to look like a kid, who just got her Christmas, New Year, and birthday presents wrapped up in one. The two nurses, performing the procedure, looked equally happy and amazed.

We filled in the forms, answered several basic questions to the happy lady in the white coat, and then were carefully placed on surprisingly comfortable couches in the blood donation room. Everything was sterile, the nurses drawing blood were careful and skillful, and after less than five minutes we were taken to a waiting room and offered cookies and lemonade by a cheerful granny, watching a Cambodian soap-opera on TV. To add to our celebrity-feeling, a Japanese lady, working as a volunteer in the center’s laboratory, rushed in, demanding to see the “crazy foreigners” who were kind enough to donate their blood to Cambodian people. She asked to take our photos, and said she would post them on the center’s FaceBook page, and everywhere she could think of. We were starting to feel a bit dizzy with all the fuzz everybody was making about us. Don’t know how many Karma points we earned that day, but we sure felt like a million dollars! Doing good gives you such a high!…

Having lost at least half a liter of blood each, we were intent on getting it back in whatever form we could find. An Irish pub, spotted on the way to the Blood Transfusion Center, seemed like a proper spot to replenish our lost liquids. The brownie/Karma points earned earlier turned out to be fully transferable to Guinness!

By the time we were finished, the Royal Palace (open to visitors only a couple of hours in the morning and afternoon each day) was ready for us. The palace looked and felt like the younger sibling of that in Bangkok, and we enjoyed walking through the nicely combed green grounds, but not more than that. Call us nerds, but the main highlight of the day was definitely the Blood Transfusion Centre!

In the evening we dined at Lotus Blanc – a “training restaurant”, where kids from the streets were trained in gastronomy by some French charity. The whole “doing good” thing turned out to be quite contagious!.. The restaurant was nice, though – not easy to find, for its location was marked on the map only very abstractly, but we had a good time there. The staff were all young kids, incredibly nervous, but doing their best taking orders, bringing food and pouring drinks. To their credit – Lotus Blanc was the only restaurant during the trip where all our dishes arrived together, and we could have a proper meal without waiting for one another.

The next morning, the propeller plane of Cambodia Airlines promptly delivered us to Siem Reap. The flight took just 45 minutes, as opposed to potential 8 hours by bus – no comparison, air travel any time!!!! Anybody who can afford a $100 flight should not even think about any ground transportation longer than a couple of hours in Asia. I like the whole backpacking style of travel, but I draw a line at a 5-hour bus ride and a bathroom anywhere but en suite. In our advanced age – definitely air travel!

Siem Reap was just as we left it last Christmas – busy without being too kitschy, full of people, yet cozily anonymous. We even found our favorite bar of last season – Charlie’s. He moved to a nearby street, and the motorcycle proudly decorating the wall over the bar was now parked in the back, but we found it! And Charlie, the owner, was sitting on the corner of the bar just like we left him a year ago. The reunion was celebrated by drinks, and more drinks, and then even more drinks. Gin and tonics were consumed by the bucket, Jägermeister cocktails (yuk!) followed, marking the evening’s point of no return, and the rest of the alcohol of the night could not be remembered or identified later. At some point we were joined by a motley birthday party that have been on their feet celebrating since early morning, half the street moved in, and even though we had no recollection of how we managed to find our way back to the hotel – this was a proper and memorable good-bye to Cambodia!

The next day, a fancy plane of Bangkok Airways, Thai “boutique airline” took us to Thailand, where a big 747 Boeing was waiting to take us back home.

Planes, travelling to Europe from Bangkok, probably have the weirdest passengers, most of whom look (and smell) like they have not seen a shower in months. Many were traveling back into winter in flip-flops, tank tops, shorts, or paper-thin harem pants, ugly as sin. Those were mostly crazy-ass Europeans. To their credit, none of the Asian passengers were seen inappropriately or un-washingly dressed. They were definitely in the minority, though… You could not help but feel for the crew. Smelly and wild-looking as the passengers were, most of them seemed too tired, drunk or high to be loud, though. Most did not even eat – they collapsed into their seats, buckled up, and fell into an uncomfortable coma for the whole of 11 hours that it takes to reach mainland Europe.

Watching them dissipating into the underground at the Munich airport upon arrival, looking utterly out of place in their summer drag, we realized that the vacations were officially over.