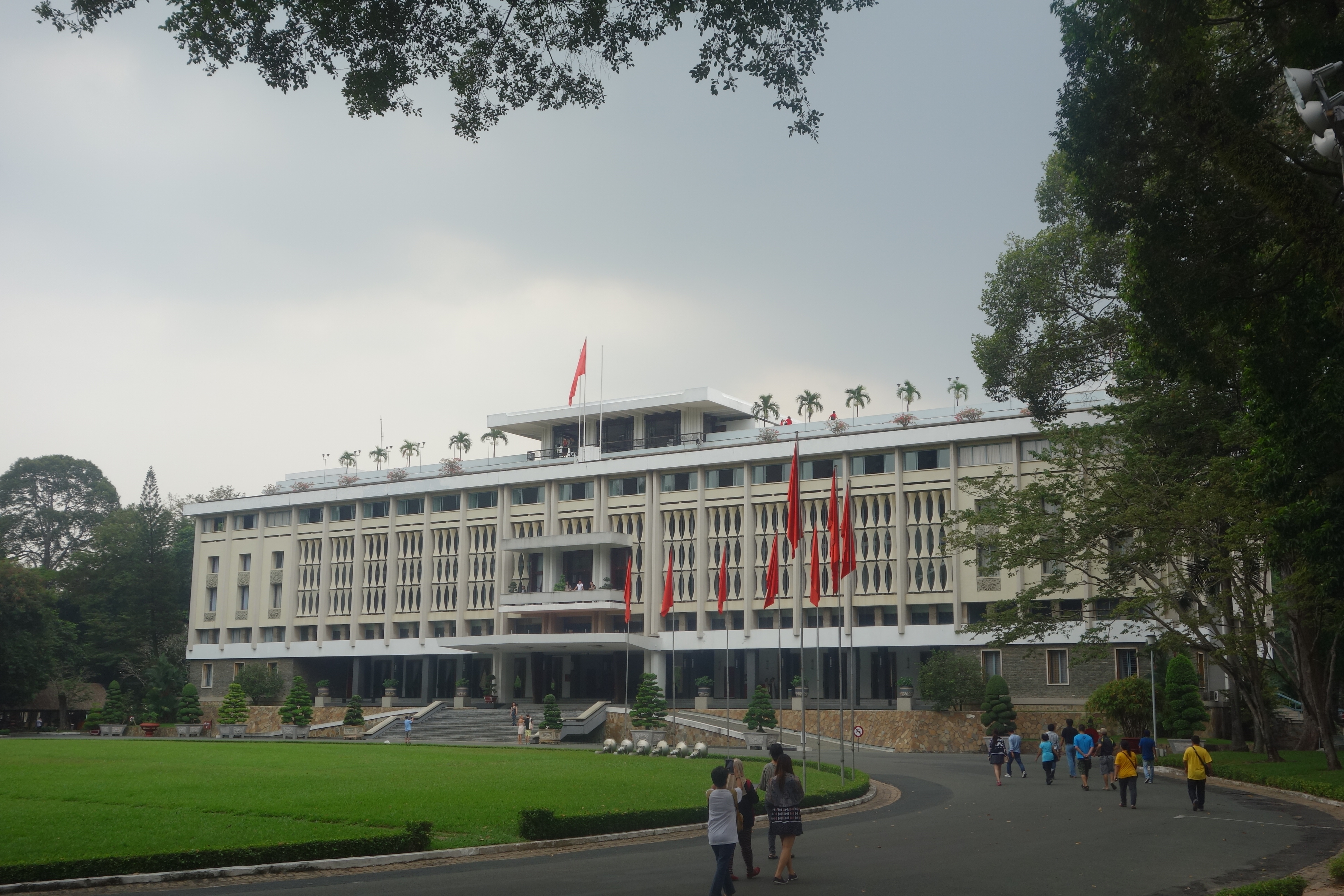 The title line, shamelessly borrowed from an old Soviet movie, probably best explains today’s Saigon.  Each one of the 19 districts comprising the city is different, and often even moving around the corner in the same area you find yourself on a completely different planet.

The best example of such dichotomy can be seen between the former China town area of Cholon in District 5, and the downtown old Saigon in District 1.  Despite the name, the old part of town boasts modern steel and glass sky-scrapers, Versace boutiques, and fancy colonial-era hotels, renovated to mint condition.  Cholon means “market” in Vietnamese, and the whole area is just that – one big (and I must say, quite dirty) street market. Hundreds of street shops selling cloth have their goods displayed right on the dirty pavements, shop owners measuring the yards of silk or cotton by stretching them out in the middle of the street.  Shops next to them will be selling plastic dime-toys and tiny Santa Claus outfits, and all this will be sprinkled with fruit stalls, spice shops, inevitable odorous food carts, and motorbikes with broken exhausts, dashing in-between people munching on their noodle soups on the side of the street.  The air in Cholon was heavy, grey and dirty, and you could almost feel the exhaust grime collecting inside your lungs.  All this gives the area an uncombed and unwelcoming feel, very far from your regular “China Town” anywhere else in the world.

We went to Cholon in search of architectural attractions – the Lonely Planet guide promised a dozen pagodas tucked in-between the chaos of the district.  We found most of them, even though it seemed they were built with every attempt at preventing people from seeing them.  Some were so overcrowded by nearby food stalls and cloth shops, that you needed a magnifying glass to locate them.  After about ten, we were all pagoded out, and were happy to leave this part of town for a bit more air.

In general, I regret to say that even though Vietnam is a great country with fantastic cuisine and exceptionally friendly people, and I am definitely glad I had a chance to visit and get to know it at least a bit – I will be in no hurry to return.

What it stuck in my mind for, and what eventually made us leave after only ten days, was three things: the already mentioned rock-hard beds, street odors and dirt. I am not being nasty or snobbish here, but I am extremely sensitive to smells, and in Vietnam you encounter a lot of them, mostly of the unpleasant variety. The mix of food being prepared, garbage rotting on the streets, motorbike fumes, and God knows what, creates a concoction that turned out to be unbearable to my nose.

Dirt is another thing.  I cannot say it’s specific to Asia in general or Vietnam in particular – a while ago it was the dirty streets that made me leave my own country in the first place without much looking back.  Maybe dirt, grime and garbage are socialist things, but just like I hated the streets of Russian cities full of litter, all the places we have been to in Vietnam bore a painful and unattractive resemblance to my home country.  In Vietnam, though, due to much higher temperatures, garbage covering the streets, had a chance to rot much faster, and odorize the atmosphere in no time.

To add contrast to our experiences in District 5, on the way back we happened upon the cleanest public toilet in the world. Located in a park, it was free of charge, spotless, and you were expected to take your shoes off when entering it (!!!). You were provided with a pair of slippers to wear instead, and the place looked absolutely sterilizingly clean, and in contrast to the streets, did not emit any unpleasant odors. You could eat off the floor, if you wished! This oasis of cleanliness was in an unexpected and rather stark contrast to everything else we have encountered in the city so far.

After overdosing on pagodas, we decided to get a taste of more modern architecture, embodied in the Reunification Palace located in the center of Saigon.  Originally built as an Independence Palace for the president of South Vietnam during the American War, with the arrival of communist tanks pushing through its gates in April 1975, it became the main symbol of the fall of South Vietnam.  Ngo Dingh Diem, the president of South Vietnam, who the palace was originally intended for, was so unpopular with the people, that not only his own air force bombed his previous palace (resulting in his designing a reinforced bomb shelter in the basement of the new one), but he did not have a chance to see his new digs finished, as he was killed by his own troops a year after the bombings, and three years before the completion of the Reunification Palace.

The building itself is grand, but rather typical to the architectural style of the 60-es in its plain, concrete simplicity.  Complete with an in-house movie theater, library, games room, disco bar and a helipad on the roof (eat your heart out, James Bond!), the building also boasted an underground part, that was probably the most interesting place to visit.  The basement has not only a bomb shelter, commissioned by Diem, but a whole intricate system of tunnels, communication rooms, and command posts, complete with war maps and the terribly outdated by today’s standards communications equipment.  The visit to the Palace was definitely time and money well spent!

Due to the specifics of the audience, we had one more item on our agenda.  The Lonely Planet guide mentioned an Irish pub, located somewhere in the vicinity of the Reunificaiton Palace, and we were inclined to find it, and put it on the “worldwide list of visited Irish pubs”.  Having combed through the area we realized that the pub mentioned in the book was long gone, but by lucky coincidence stumbled onto another one, proudly displaying the Guinness sign above the door.  They only had canned Guinness, but sitting in a chilled interior with a cold Guinness was a very welcome addition to the day.

Having spent the whole day walking, in the evening we could only venture out in the neighborhood for a nightcap before going to bed.  Having ducked into a parallel alley in search of a place that would sell wine by the glass, we were in for another cultural surprise.  In one of the buildings, tucked between restaurants full of people and bars with loud music, we saw an old woman lying on the floor with a bunch of monks chanting behind her, and a group of relatives sitting in silence in the front.  We weren’t quite sure what it was all about, but the freaked-out faces of the next-door bar staff where we parked our asses, confirmed our worst suspicions: the woman was dead, and the family was sitting vigil. In a small temple opposite the place you could see more monks preparing food and flowers for the ceremony.

We were rather shocked to see all this out in the open, in the middle of a bustling backpackers district, with no attempt to hide the overly private ceremony from the eyes of the onlookers and passers-by.  However, having read a bit about the country and its traditions, and spoken to a couple of foreigners living here, we realized that Vietnam was not big on privacy.  Religion-wise it’s a weird mix of Buddhism, Thaoism, Catholicism and Confucianism. Even people considering themselves Buddhists or Catholics, would have borrowed bits and pieces from other religions, especially Confucianism (which technically speaking is not even a religion, but rather a system of beliefs) with its collectivism, the importance and prevalence of the group over individual and respect to elders.  People live as a group, and their lives are often laid out there in the open – privacy is not something to strive for, but rather something to avoid.  This easily explained the dead body in the middle of a bustling street.  The bar staff were only freaked out that the scene might scare away the tourists.

Nevertheless, we finished our wine as soon as possible, and retreated back to the hotel.  The story of the vigil does not end there, though.  The chanting continued throughout the night, and was so loud that could be heard through the closed windows in our hotel room a street away from the temple.  Hard beds now paired with vigil chanting throughout the night, and we were very ready to leave Saigon.

We had, however, one more item on the agenda, and this was planned for the following afternoon.