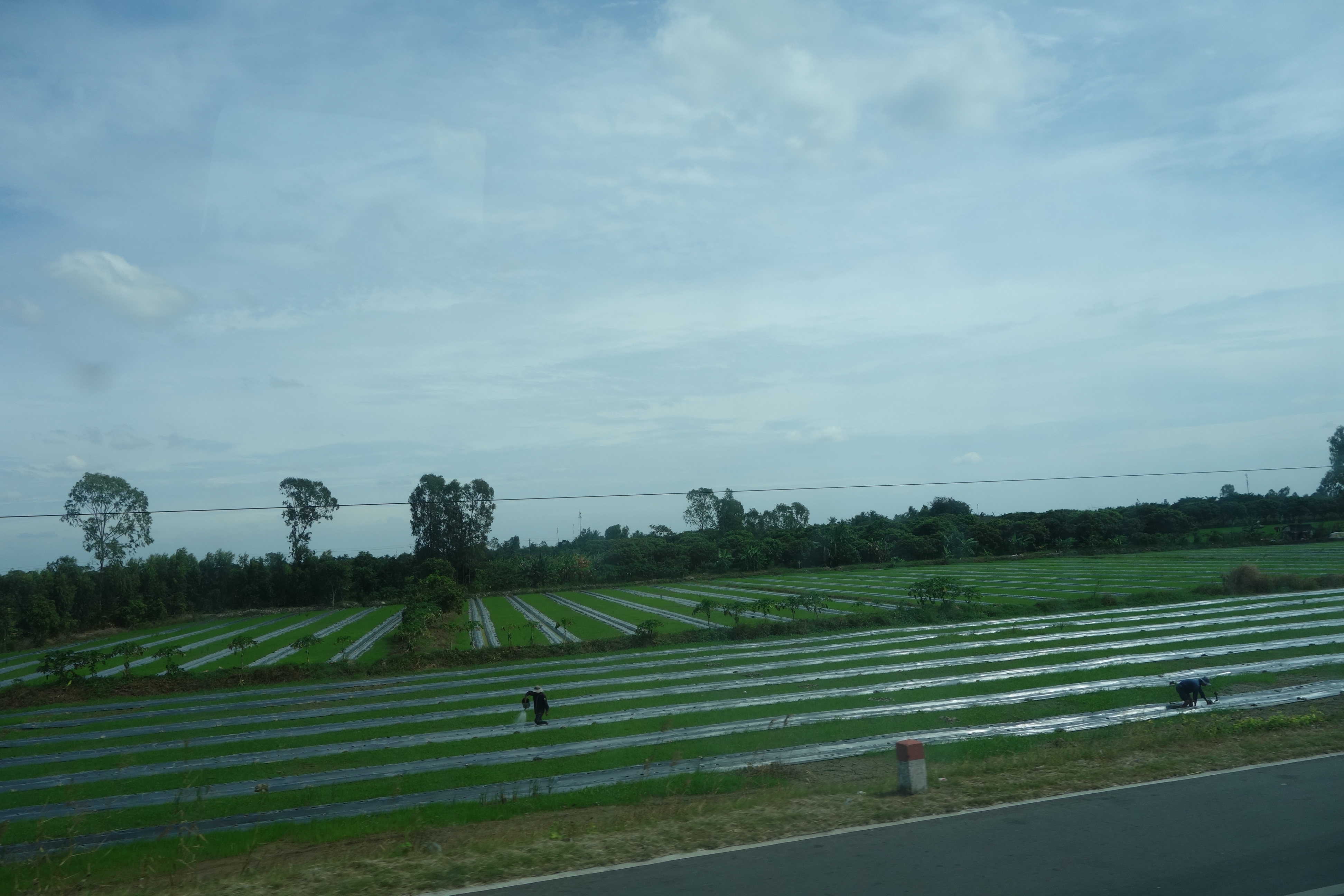 Turned out, Saigon was not so easy to say good bye to. As luck would have it, our last memories of it were going to be not the drinks with a view, but a completely unexpected oompah band that started playing outside of our hotel at 5:30 the next morning. Judging by their sound, the band could use a bit of practice, but preferably not at our expense.  We were not planned to leave before 9, so this loud and out-of-tune wake-up call was not very welcome, to put it mildly.

Our first reaction on hearing the first loud brass accords of the band at full pitch, was “What the fuck???…” But so is Asia – annoyed as we were to lose our morning sleep, we could not help but be amused at this totally out of place happening. No idea what it was – an after-wake party, a morning rehearsal for a wedding, a Wednesday morning special, but the band was going at it in full swing for the next two hours with half hour breaks in between.

The sounds were, again, coming from the next alley, and my curiosity made me run down in an attempt to check out the band. Unfortunately, the hotel door was locked up and barricaded with a dozen scooters brought into the lobby for the night. The hotel manager was sleeping peacefully on chairs behind the reception desk with a T-shirt over his face, and I simply did not have the heart to wake him up. The mystery of the oompah band remained unsolved…

It was that same hotel manager – an extremely likable and helpful guy – who a day earlier volunteered to give us a hand with our travel arrangements. Everything seemed to work perfectly: we had the confirmation receipt (in Vietnamese) in our hands, and we were picked up from the hotel at 9 in the morning, as promised. Then the adventure started.

I have to say here, that in our experience, everything in Vietnam runs on time. If you were promised to be picked up at 7, it would be 7 sharp. If the bus is scheduled to leave at 10:15, it leaves on the dot. The Thai “ten minutes” that mean anything and can stretch from the actual ten to half a day, apparently did not make it as far as Vietnam.

A guy who picked us up walked us from the hotel to the nearby travel agency, where two girls with telephones glued to their ears gave us tickets (all in Vietnamese), and ushered us into a taxi. The taxi took us to the downtown bus depot, where we were very quickly re-potted into a mini-van together with 5 or 6 Vietnamese passengers. The mini-van delivered us to the big inter-city bus depot with a couple dozen big red buses, surrounded by a big crowd of people, waiting to board them. This relay bus transfer sounds quite complicated and elaborate, but to our amazement everything worked like clock-work, and without much effort on our part we were gently herded off into the right direction at every place of transfer.

We must have looked lost at the big bus depot, for the official-looking guy walking around the area, came up to us, asked to see our tickets, and reassuringly pointed out to a nearby bus, repeating “fifteen minutes” several times in broken English. Even though all signs on the bus were in Vietnamese, none of them resembled Dalat, and we started getting slightly worried.

Next time the official guy was passing by, we gently tugged at his sleeve, and made an attempt to communicate.

– This bus,” we said, pointing out to the one he identified to us earlier, “is it going to Dalat?”

The guy’s face registered surprise, he double-checked our tickets, and said:

He kept pointing at the bus, though, and the numbers on the ticket matched those on the bus, so we figured this Can Tho must be another name for Dalat in Vietnamese. After all, it used to be a French city, so maybe there were two names to the place.

In exactly 15 minutes the bus pulled over at the depot entrance, we presented our tickets to another uniformed official, our luggage was thrown in, and we took our assigned seats inside. The bus started at 10 sharp, just as was indicated on the tickets. It also had free Wi-Fi! For the first fifteen minutes of the trip we were busy logging in and admiring this technological advance, so when the conductor came to check our tickets, we were already well on the way. Yes, the Vietnamese long-haul buses have conductors, travelling with them! They announce the pit stops and destinations, distribute the complementary water (each ticket comes with a small bottle of water and a disinfection towel), and make sure the TV plays the best of Vietnamese shlagers for passengers’ pleasure throughout the trip.

The conductor was the second person who did not share our belief in Dalat being the destination of the day. He kept saying Can Tho, Can Tho, and after about ten repeats our story about it being the Vietnamese pronunciation of Dalat started to wear quite thin. We finally decided to solve the mystery, fished out the map, and pushed it in the conductor’s face, pointing at Dalat, located about 300 km North of Saigon. The conductor shook his head, looking at us as if we were a bunch of retarded children, and pointed out to a place on a map about 300 km South of HCMC, which, was, indeed, called Can Tho. That caused the second big collective “What the fuck?!…” of the day.

Ok, we had to accept it: we were on a wrong bus. And we were going in a wrong direction.  All we could do was make the best of it.

We quickly regrouped and decided to spend the 5 hours on the bus reading up on our unintended destination. We were going down South into the Mekong Delta and were intent to enjoy it.