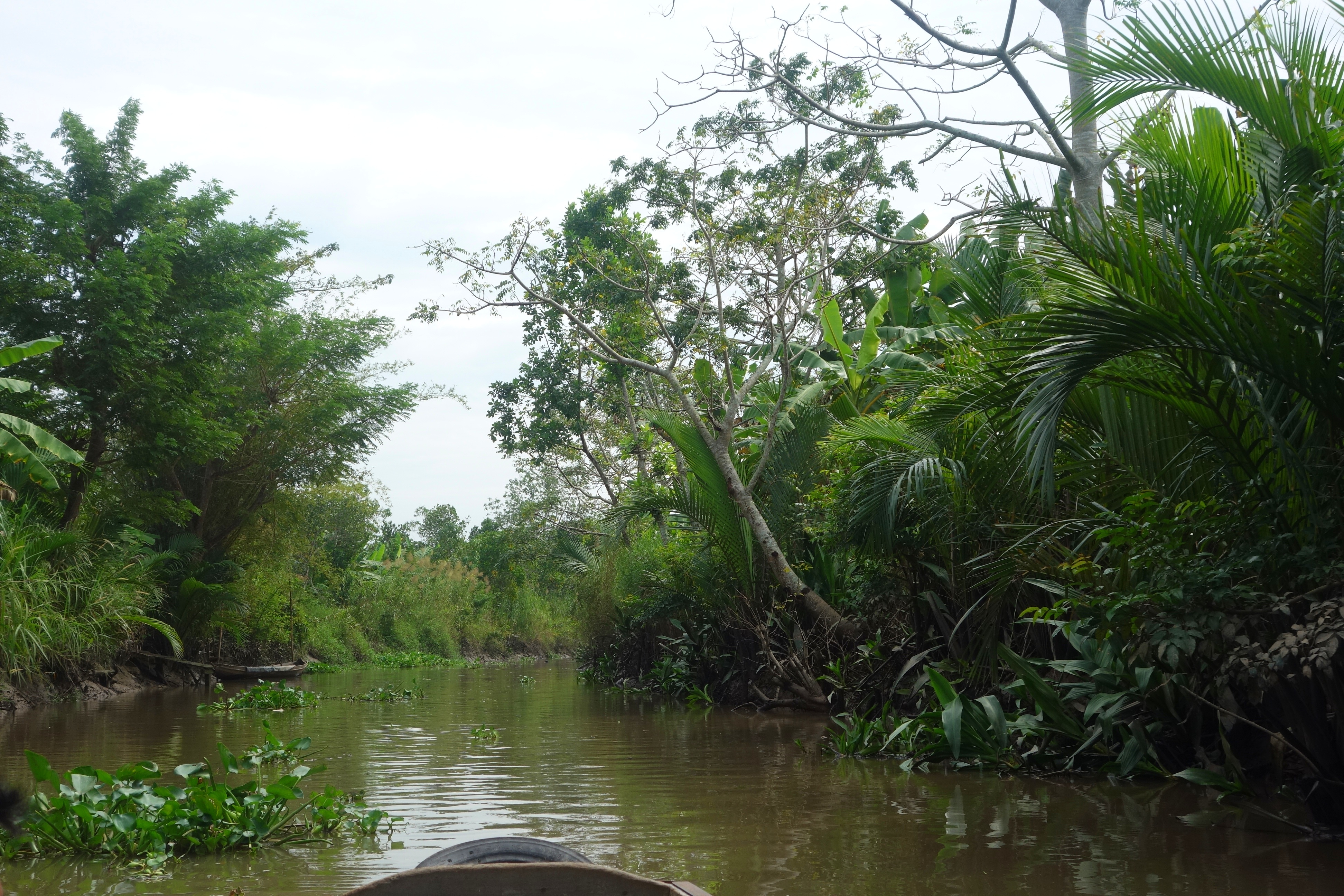 Can Tho, our unexpected destination, seemed tiny, but according to all guide books it had a population of a million and a half, which technically made it bigger than Munich.  It definitely did not look it.  We ended up there in early afternoon, and the place had a slow sleepy feel to it.  Sitting on the banks of the Mekong river, it could boast a big lazy promenade with a huge leninesque statue of Ho Chi Ming in the center.  We landed in the first open bar, enjoyed a well-deserved beer, and the boys went scouting around for accommodation.

After a half an hour duty round, we became proud residents of a hotel with an unpronounceable name (Ngan Ha Hotel).  Can Tho was not overrun by tourists, and accommodation was not really in abundance.  Our room smelled of wet mop, but was clean, had a bed, hot water and air conditioner, which helped eliminate the mop odor when switched on.  We weren’t planning on lodging there long, anyway.

When walking around downtown, we could not help but notice, that most local teenagers were wearing a rather peculiar and distinct hairstyle.  It can best be described as “Kung-Fu Elvis” – with hair on the sides and the back of the head cropped quite short, and the hair-sprayed long top part proudly standing up.

Since we ended up in the area, we allowed a tour agent, who miraculously materialised in the hotel lobby, to talk us into a half-day boat tour on the Mekong Delta the next day. Planned to start at a scary hour of 5 in the morning, it included two floating markets, rice noodle factory, shitloads of water and scenery, an English-speaking guide and a boat.

The Mekong is one of the great world rivers, that starts as a little stream in Tibetan mountains, and flowing through China, Burma, Laos, Cambodia and Vietnam, gaining weight and power the further it goes, floats into the South China Sea.  But not before splitting into 9 big arms and innumerable little rivers, canals and streams that form the Mekong Delta.  The Delta is a true water world, where people, boats, houses, restaurants and markets float on the water and live on and off it.

We started off still in the dark, in an attempt to make it to the market right after sunrise, before the main hordes of tourists arrive.  Even in twilight you could see that both banks of the river we were on were densely covered with shaky huts on tall wooden stilts, little river gardens growing some sort of floating greens for pig food.  With the sunrise more and more boats carrying food, goods, and construction materials started appearing from every nook and cranny of the river.

The floating market was an extraordinary sight.  Dozens and probably hundreds of boats from all over the area sail in to trade.  Most were selling all sorts of fruit and vegetable, but there was also rice, meat and other foods on offer.  Every boat advertised their products by tying a sample on a mast or a tall pole, visible from afar.  Some had turnips, lettuce, watermelons, and everything imaginable on their “advertising pole”, others specialized in just one product.  All boats were free-floating and moving constantly, busy with an ongoing sale and barter.  We saw boats filled to the brim with pineapples, boats with chickens and little gardens on decks, boats driven by tiny ambidextrous women handling them with surprising ease, and kids jumping from boat to boat delivering purchases.  It was chaos on water, but smooth and easy chaos, again very well-orchestrated and organised.

Most boats come from nearby for their morning weekly shopping, but some arrive from other provinces, and dock in on the banks, or sometimes in a wider part of the river for several nights.  The market was definitely a worthy sight!

As part of our half-day tour, we stopped at a rice noodle factory – a small family business, producing (mostly by-hand) an amazing amount of rice noodles that they sell not only to shops and restaurants in the area, but also to whole-sellers.  Having seen how much work goes into the process, I will never look at my rice noodles bought in the Asian shop at home in quite the same way.  If anything, the visit to the factory will make me respect them even more.

By about 9 o’clock there were visibly more tourist boats on the river, all following roughly the same routes, so we soon started recognizing fellow travelers, and our boat driver was staging fake races with other captains.  One of the boats had a big Vietnamese Mama for a captain, who had 4 young and serious-looking German guys from Hamburg as passengers.  All four were sleepy, chain-smoking, and wearing typical Vietnamese cone straw hats, which, as our guide explained to us, were worn normally only by women.  The Big Mama obviously forgot to mention this to her passengers.  It was not clear if she spoke any other language than Vietnamese, but she smiled and giggled all the way, driving the boat with one hand and both feet, all the while making nice roses and crowns out of palm leaves and waving to other boats.  When we caught up with her at the next river turn, all four German guys were wearing palm tree crowns in addition to their women’s hats, and started looking quite bizarre.

By means of a break from water, we walked along the banks of one of the side canals for about half an hour, past the local farmers’ houses with rice fields and fruit orchards.  There was papaya, Jack fruit, durian and God know what, growing in abundance on both sides of the stream, ducks and chickens were running around, and the area made a relaxed and quite well-to-do impression.  To add to our education in Confucianism, many places had tomb-stones of relatives integrated into the landscape of their gardens.

Chickens in Vietnam is a whole separate story. Cock-fighting is one of the most popular national sports/pastimes/whatever you call it, and fit-looking roosters ready for the fight are running around in abundance. The long-legged muscular prize winners are a valuable commodity. They are kept in straw or metal coops on the lawns, and fed separately from their envious harems. The losers, I guess, end up in a soup.

On the way back, we caught up with the Big Mamma and her serious passengers once again.  And just in time: the propeller of her motor, sitting on a long pole in the back of the boat that doubled up as a rudder, got caught in a wire, hanging from the nearby lamp/telephone/whatever pole.  A skinny guy in a telecom company uniform, working the wires on a nearby pole, tried telling Mamma off, when hearing her wailings, but got such a mouthful bank, that immediately shrunk in size even more, and hid behind his telephone pole.  Together with our guide and driver, we disentangled Mamma’s boat from the wire, that luckily was not live, and accompanied by her cheerful giggles and thanks moved on back to where we started from.  It was only 14:00 when we docked at Can Tho, but after our early start it felt much later.

Happily exhausted after all the sights and impressions, we slept for the rest of the day, and woke up briefly to walk across the road to the local travel agency, where two cheerful girls booked us transportation to our next destination – the island of Phu Quoc.