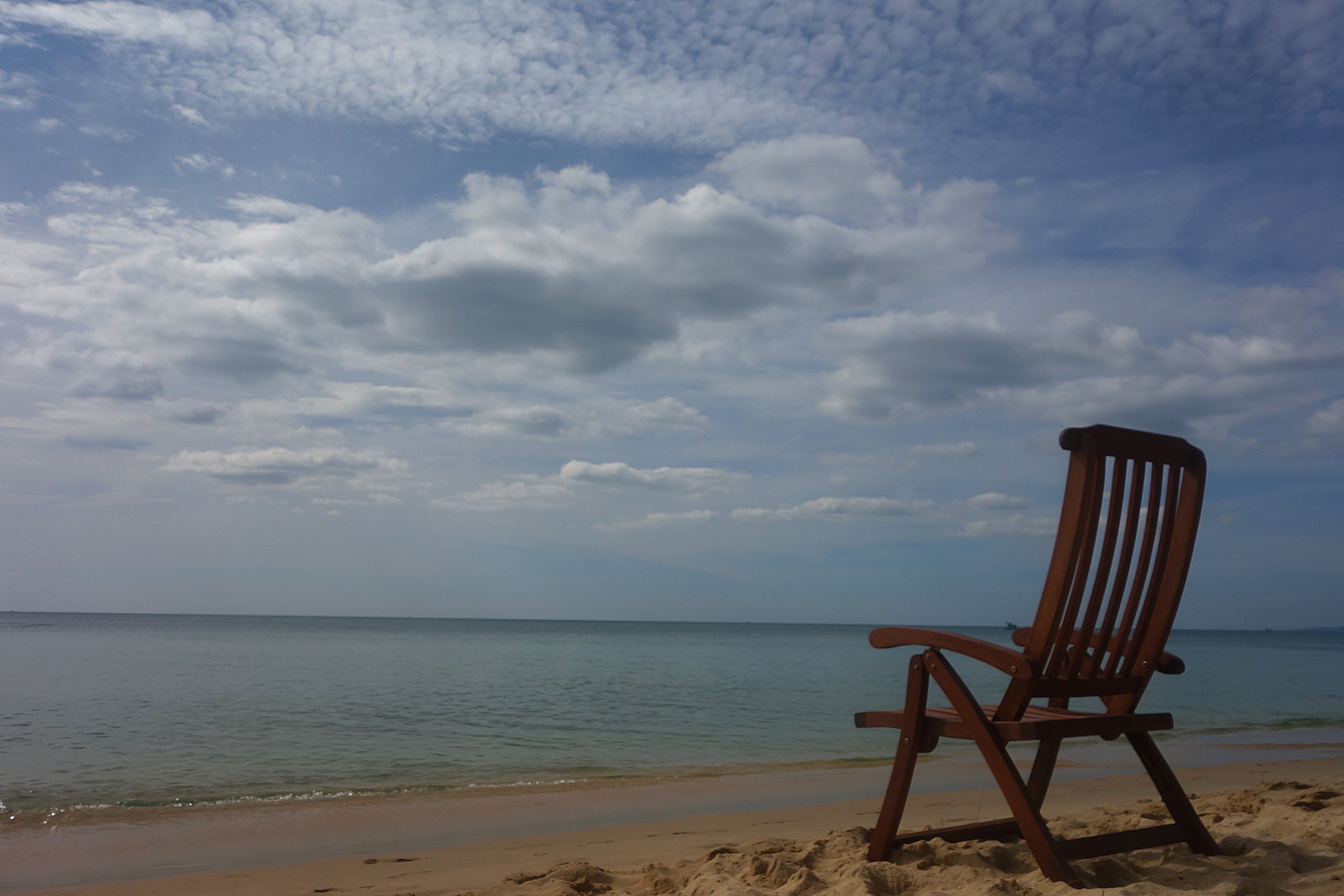 Having booked our travel for the next day, and triple-checked that the name of our destination was clearly registered on our bus and boat tickets, we landed in a corner bar for a nightcap. The bar had beer, cocktails, snacks, and music. Actually, a little too much music than we were used to.

Somehow, Vietnam did not get the memo that it’s ok to talk to each other in bars, and they seemed to be doing everything possible to prevent this from happening. The volume of music blasting out of every place in the evenings is unbelievable – even when sitting outside you need to shout at the person sitting next to you to be heard. The decibels seemed to be the main criterion for trendiness. The bar of our choice definitely seemed to hit all the top scores, for the music was knocking you off your feet within a radius of half a mile. Inside, the volume was unbelievable. Nevertheless, a group of teenagers, each sprouting the Kung-Fu Elvis hair, was sitting around a small table right under the speakers, with phased-out looks, all nodding simultaneously to the beat. They must have been comatose, or deaf already, for every normal person’s eardrums would have blasted within minutes of being inside.

All things considered, our unexpected destination did not disappoint: we got to see the Mekong Delta, and moved with the weather. Everybody we met on the way coming from the North, said it was pissing down with rain there, and the weather forecasts supported the story. Turned out, we got a better deal than we planned for.

Our morning pickup showed up on time, promptly delivered us to the bus, that took us to the hydrofoil boat, and after three hours we were on Phu Quoc. Metered taxi dropped us off at the most hotel-populated area, and we parked ourselves at a restaurant with a worrying amount of signs in Russian on the walls and in the menu. Judging by their size and absence of smiles, the family of four eating at the next table were the target audience of those signs. The boys went out on a scout.

They returned within half an hour, having secured us two bungalows in a place with unpronounceable name (Thanh Kim Nga) just around the corner from the restaurant base camp. The place was within a couple minutes’ walk from the beach, had a lovely garden, and nice cozy bungalows. By the time we moved in and showered it was late afternoon, and we were ready for dinner. It was while sitting by the guest house with beers and contemplating our next move, that we met Michele.

Michele definitely deserves a complete chapter in these notes, but I am afraid my writing skills have not evolved high enough to fully describe his colorful character. He materialized out of nowhere with a beer mug half full of dark honey-colored liquid, inviting us to join him in for “tea”, that suspiciously smelled of whiskey. When we started joking around, Michele quickly came to a landing, simultaneously flirting with the girls, bantering with the boys, drinking, telling us his life story, advertising the book he had written, and piling up loads of lies, myths and just random miscellaneous crap on top. He was absolutely, mind-bogglingly fascinating and bat-shit crazy. We were starving, but were afraid to let Michele go, fearing he would disappear into thin air and turn out to be a figment of our imagination. We invited him to join us for dinner, if he showed us a good place to eat.

Throughout this mad evening, that lasted well past midnight, and was accompanied by great food and loads of drinks of varied alcoholic content, we learned a bit about Michele’s colourful biography. He was born in France 83 years ago, at some point moved to Australia (which did shit all to his still heavy French accent), married a beautiful Vietnamese woman younger than his daughter, came to Phu Quoc, and happened to be the proud owner of the hotel we were staying at. 27 years ago Michele was also abducted by aliens, who turned out to be quite friendly, showed him around their very advanced 9th level planet, and opened his eyes to the wisdoms of the world. Upon return from his intergalactic travels, Michele founded a religion, and wrote a prophecy book that got translated into numerous languages, making him a well sought-after celebrity. The island marriage (in addition to womanising and investment opportunities) was also a chance to escape spotlight.

Before leaving for the restaurant, Michele checked that his wife (who conveniently owned a liquor store at the guest house) was away, fished out a bottle of vodka from under the counter, threw in an almost full bottle of gin for us, and announced that we were ready for dinner. The gin, that he said he could not stand as it made him puke, was left by some of his previous guests, and he generously donated it to the dinner cause. In the restaurant around the corner we eat wonderful food, drank chilled white wine from Dalat, and laughed with Michele. After five bottles of wine, Michele downed a bottle of vodka with obvious relief (to his credit, the bottle was only half a litre), and encouraged us to nip into the gin. All the while he kept winking at a beautiful 18-year old Philippine girl, singing in the restaurant, not forgetting to flirt with all other women within earshot.

By the end of the evening, when we wished each other good night, and parted our ways, he was much steadier on his feet than any of us.

When we crawled out of our bungalows in search of breakfast at about 10 the next morning, Michele was already up and about, walking around with an obligatory liquor beer mug. We fought away his generous offerings of whiskey, rum and other strong liquors for breakfast, and opted for tea and eggs. Visibly disappointed, Michele moved on to his next victim – a gloomy-looking French guy hugging his coffee cup at the table in the corner. But not without giving the female half of our party a couple of winks.

We saw him every day that we stayed on the island, always energetic, inexhaustibly flirty, permanently drunk, unfailingly crazy, and enjoying every minute of it. Michele’s prophecy book documenting his abduction and detailing his new religion, Taiooba, is available for free on the Internet, and I made sure to download it for future reference.

Michele was undoubtedly the island’s most colorful character, but he was not the only new friend we made there. Stevie and Cliffy, two middle-aged London brothers with kiddies names, stumbled upon Phu Quoc during their 6-month vacationing in Vietnam, and loved it so much, that they refused to leave. They made friends with everybody in the area by sitting in the beach bar from morning till evening every day, consuming beer and mojitos in amazing quantities, and partying through the nights. They moved from one guest house to another, never straying outside of the 500-meter radius from the beach bar, living a localized nomadic life in the area. We met them the morning after our dinner with Michele at the liquor store of the guesthouse, where the brothers were stocking up on six packs of Heineken for breakfast.

Friendly and down-to-earth, Stevie and Cliffy were always ready for a hearty laugh, a good conversation about anything – be it movies, music, history or night life – and, of course, a drink. We spent our second day on the island at their table in the beach bar, but exhausted by our escapades with Michele the night before called it an early night.  We planned to leave the following morning to mainland, and even had tickets for the boat, but as always, reality planned something else for us.