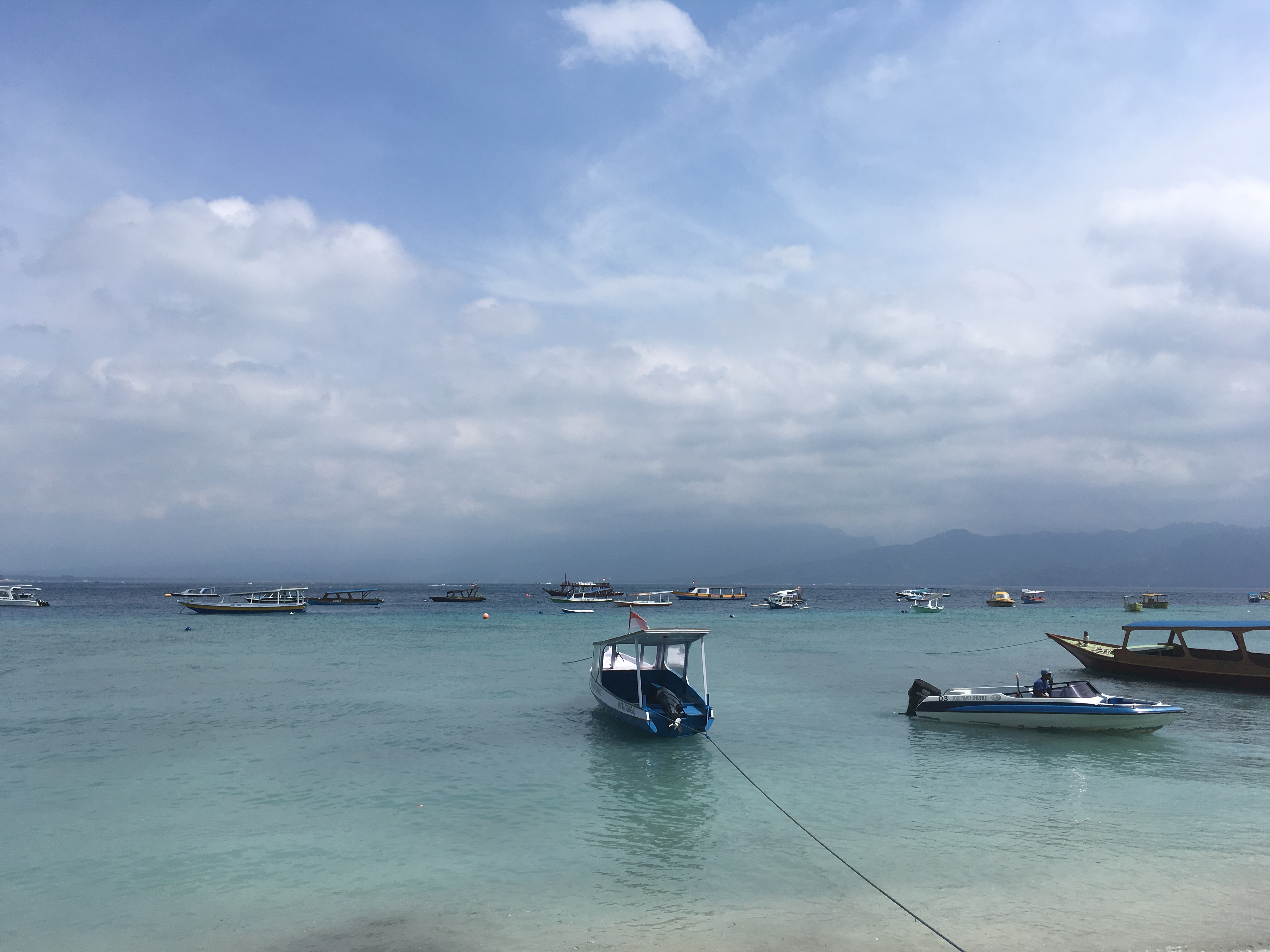 Indonesia is comprised of about 17,000 islands, and I don’t think anybody (including people living in the country and even the craziest of backpackers) has ever visited all of them to make a comparative analysis.  But based on our very biased and very limited experience of visiting 3 out of these 17,000, we can wholeheartedly say that they are very different, indeed.

Our next stop was Gili Trawangan, aka “the party island” of the 3 tiny spots off the coast of Lombok that at closer inspection of the map turn out to be actual land masses.  Gili Trawangan is specifically known for the absence of any motorized transport – you are welcome to explore it on foot, on bicycle or in a cidomo – a rickety buggy pulled by one of the local tiny but sturdy horses.  Gili Trawangan also boasts to be the smallest island in the world with an Irish Pub.  We did not know that before going, but were sure happy to find out this trivia fact and experience it in person!

All three of the Gili Islands (Trawangan, Meno & Air), are easily reachable by a quick boat ride from nearby Lombok, and by a little less frequent and much longer boat trip from Bali.  We have never looked for easy ways, so arrived on Trawangan from Bali in a throw-up boat through stormy seas.  Somehow most other passengers on the boat either had a very delicate constitution, or heavy hangovers (judging by the looks of many – probably both), and the almost 3-hour ride through the stormy waters of the Lombok straight pushed them to the limit.  By the time we disembarked on Trawangan, we seemed to be the only two standing firmly on our feet.  This definitely gave us advantage in beating the arrived crowd in securing accommodation, as following the nomadic holiday traditions we refused to book anything anywhere in advance, and relied on good luck and chance.

Compared to Bali, Gili Trawangan was tiny, and easily walkable in about 1.5 hours (at a ve-e-e-ery slow pace), and rather un-evenly populated.  All the locals lived in the middle.  All the tourists were on the perimeter, near the beaches.  The Eastern side of the island was overpopulated with the latter, while the Western side was as good as dead, with only a random super-fancy rental condo stuck in the middle of nowhere, or a tiny exclusive resort tucked away in the hedges.  Needless to say, we stayed on the Eastern side, where all life (not all of which could be accused of excessive intelligence) was.

On the day of arrival, we made the same mistake so many visitors to Trawangan do – we turned left from the boat landing spot, and quickly secured a room in the shabby-chick “Buddha Dive Resort” in the middle of the bustling island scene.  Turned out – the bustle never stopped, and the Eastern side of the island was as clearly divided as the island itself – party zone to the left from the boat landing, and a more quiet and relaxed area to the right.  The Irish luck landed us right in the middle of the party zone.  Which was OK for when we wanted to party, but when we wanted to sleep, the super-duper stereo systems of the two night clubs strategically positioned on both sides of the “Budda Dive” did not contribute to the tranquility of the night…

In the bright light of the morning sun our room also turned out to be more shabby than chick, and absence of running water, door handles that had a better grip on your hand than the door, combined with the just experienced night entertainment forced us to search for new accommodation.

There was plenty to be found, and now familiar with the East coast topography, we aimed our gazes to the quieter side of the beach.  After a lazy walk on the main road, we happily moved into a spacious, air-conditioned and relatively modern room at “De Ja Vue” by the Big Bubble diving school to the right from the boat landing.  All our remaining time on the island we lived the way one should – partied on the left, and came back to a comfortable (and quiet) bed on the right.

Tir Na Nog or simply “The Irish” definitely brightened up the bar scene on the island.  At the time of our visit there was not a single Irish person working there, but the food was great, the music good, the local staff fun and quick and the Indonesian-style craic was as good as the Irish.  We happened to be on Trawangan on Christmas Eve, and the choice of the place for celebration was really simple – of course, The Irish!  They exceeded themselves with the Christmas grill of all sorts of meat, seafood and vegetables – all freshly cooked, beautifully presented, and absolutely mouthwatering.  The Guinness was in a can, but you can’t have it all – local beer and wine complimented the food just as well!

We finished the Christmas Eve celebrations well past midnight in a random beach bar on the way back to “De Ja Vue” (the name, as well as the location of the bar completely escapes us both, due to hearty celebrations at The Irish) with a great DJ, and well-lubricated clientele.  Several of them unfortunately lingered in our memories for longer than they were welcome to:

As always, Christmas/New Year parties in Asia did not disappoint!  We fell onto our bed at the early hours of the morning, and slept till midday.

Another great find on Trawangan was “The Banyan Tree” – a vegan café right on the main drag, where we stopped for coffee on the Christmas day, but seduced by the air-conditioned environment and the terrace open to the ocean’s winds, decided to stay for longer and try out the food.  Now, I have to say that “The Banyan Tree” took vegan cooking to an unprecedented height of art – everything we had there tasted fantastic, looked great, and definitely made us change our previously strongly-held believes that vegan food was all raw, plain and ugly…

True to our more or less set tradition of not only eating the local food, but trying to learn how to cook it, we also took the advantage of a cooking class at the Sweet & Spicy cooking school on the island.  This time, it was also a last attempt to if not love, but at least like Indonesian food.  Everything local we had so far boiled down (pardon the pun) to fried rice with this or that additional ingredient thrown in.  We were inclined to (hopefully) discover that Indonesian cuisine had more to offer!  Having signed up for the class, we turned out to be the only students in the group that evening, and the cooks Tom & Jerry (I shit you not, and sincerely hope those were NOT their real names!) dedicated all their time and attention to just us.  We learned how to cook tofu and tempeh, did the inevitable rice dish, steamed fish in a big banana leaf and put together a sticky bright-green desert that worked out to be surprisingly tasty.  All that said, with all our work, all the skills, fun & jokes of our two teachers, our faith in Indonesian cuisine was not restored – it was plain, boring, and could not compare with the scents, tastes and spices of Thailand.  Well, “horses for courses” as our friends from the foggy British Isles would say, and the courses on our plates of choice were definitely of a more spicy and fragrant variety.

We had a lovely time on Trawangan, but other destinations were calling, so the time came to leave.  Our departure date coincided with the celebrations of the birthday of Prophet Mohammed, and the locals were running around the island with a mobile mosque.  A little kid, full of himself, basking in the honor and importance of the moment was sitting on top, representing the Prophet.  Definitely an interesting sight, but the boat back to Bali (yuk!) was waiting, so it remained only a fleeting memory.

The boat back was surprisingly non-puking, and although we already braced ourselves for another (just one!) night on Bali, Kuta, where we landed up due to its proximity to the airport, turned out to be a shithole of even more epic proportions that the previously visited Seminyak.  Never again!  We could not escape from Bali fast enough!!!!

The following morning, our escape was clouded by an unexpected and unpleasant surprise.  Having arrived at the airport 3 hours before the flight (Kuta was simply too awful to experience it any longer), for the first time in more than 15 years of travelling, I realized that the tickets we were holding in our hands were for a wrong date.  More precisely – for a week later.  I can’t even claim that I realized it myself – having smugly approached the counter and dropped our bags at check-in desk in relief, we were met with puzzled glances from the airline staff, who politely informed us we were a week early for the flight we were fully intent on boarding.  What the fuck?????….  One more WEEK on Bali?…  No, thank you very much! Death before dishonor!  Anything, but THAT!!!  Mental note to self – booking flights on a cell phone amid the Christmas celebrations in an Irish pub on a remote Indonesian island was probably NOT the best idea…

Fast forward to a (very stressed and sweaty) one hour later – we managed to exchange our tickets to today’s date and the actual flight we were planning to take, for a handy price of $20 at the airline counter at the airport, ditched the luggage at check-in, and like two rabid dogs who only an hour later got a chance to scratch their fleas, sat in the airport sweating, panting, cursing, and taking in the day… Our Nam Air flight was delayed for only for 4.5 hours, so we had more then enough time to catch our breaths, and study the roof and the ceiling of the departure gate long enough to burn holes in them.

The “Let us take a quiet moment to pray together for a safe flight” in the end of the safety lecture on our Nam Air flight was a refreshing (if only slightly disturbing) incorporation into the familiar and stale announcement, and with these hopeful words we took off, direction Labuanbajo.  Giant pre-historic lizards – here we come!