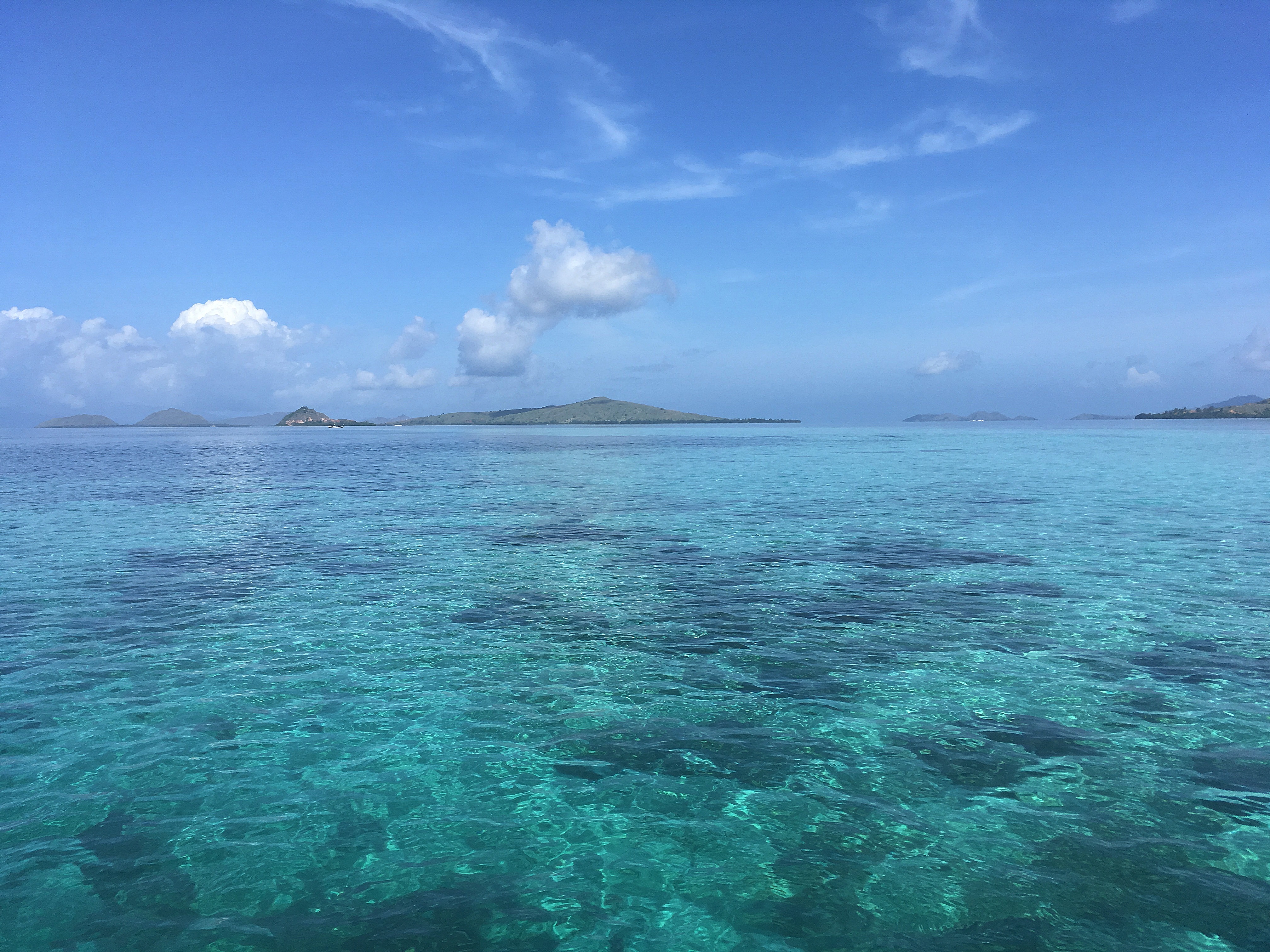 We had one reason and one reason only to fly to Labuanbajo – Komodo dragons!  Being so near the largest living lizards on Earth (rumors and the Internet sources quote specimens up to 3 meters (10 feet) long and weighing up to 70 kg (150 lb)!), we were not going to pass on the opportunity to see them up close and personal.

Strictly speaking, dragons do not live in Labuanbajo, but it is the closest starting point to the areas favored by the famous reptiles.  As many tourists coming to the area, we mistakenly thought that Komodo dragons live only on Komodo Island (which seemed logical, judging by the name).  Turned out, they actually inhabit 3 big and about 26 smaller islands in the area that comprise the Komodo National Park.  Komodo itself, while being the largest and most well-known of them, is by far not the closest, or the best to visit.  Having spent our first evening in Labuanbajo going up and down the main street and talking to every single travel agency and tour operator organizing lizard trips, we got all the information we needed to make a plan.

Most travel shops offered package 2-day trips to Komodo on a big boat in the company of 15 to 20 other fellow travelers, with several stops for snorkeling and/or diving, and a night sleeping on the boat deck.  Our days of roughing it up long gone, sleeping on boat deck seriously did not fall under our idea of fun.  To quote a good friend of mine, who used to be a roadie for a number of big rock bands of this and last century and had his share of sleeping in weird places in varied stages of intoxication, “At my age, “roughing it’ for me means staying at a place, where room service shuts at midnight”…  We could not agree more!  Besides, to me personally snorkeling (let alone diving) has never seemed like a fun pastime – excited as I get about everything up in the air and above ground, going underwater has never held any excitement for me.

Package day trips to Komodo could also be had, but would take about 4 hours getting there and another 4 hours back, which would mean waking up pretty fucking early, not having much time for lizard-spotting at destination and wasting said time on completely pointless snorkeling with random strangers.

We decided to skip on both – package tours and Komodo island proper.  In addition to being relatively remote, the island’s size of 390 km2 (150 sq. mi) worked against it – as several main street tour operators admitted, it was not really easy to see the dragons on Komodo – they had way too many places to hide.  In contrast, a mid-sized Rinca island presented a better opportunity for personal acquaintance, and pretty much everybody we spoke with absolutely guaranteed we would not leave the island without seeing at least a dozen much sought-after reptiles.  Another strong advantage of Rinca was its proximity to Labuanbajo – only about 2 hours by boat.  A small private one could be had at an affordable price for the day, and in this scenario we would be the ones calling the shots, and deciding whether or not to waste time snorkeling.

The choice was made – we will start at 8 the following morning, have a boat take us to Rinca island, see the lizards, stop on one or two smaller islands on the way, return back to Labuanbajo at a decent time of around 6 or 7 in the evening, and the next day get the fuck out of there.  The final touches to the plan were made at Le Pirate – a relaxed bar with an open terrace overlooking the bay, and our center of operations for 2 nights in Labuanbajo.  There we used the free Wi-Fi and the power of our mobile phones and credit cards to secure 2 tickets from Labuanbajo to Kuala Lumpur with a lay-over in Bali.  Looks like Bali was inescapable for love or fucking money, but to our relief the lay-over was supposed to be short – only 3 hours or so.

The next day we woke up giddy with excitement about the soon-to-be-encountered lizards.  The guy from the travel shop was true to his word – he showed up on time, took us to a boat, which was only in a mild state of decay, and went as far as to accompany us during the whole trip.  We did not really mind, as the guy was friendly, spoke the lingo, and kept pretty much to himself most of the time.  The 2-hour boat trip was sublime – the white clouds and blue skies reflected in the turquoise waters of the Flores Sea provided tranquil, if only slightly noisy atmosphere.  The boat’s engine, that in its previous life must have served a couple decades on a farm tractor, would not have passed any noise-pollution tests, but steadily powered our dingy, pushing it direction Rinca.

In the Komodo National Park you cannot walk about on your own, but have to have a local trained ranger to show you around.  The rangers were sitting at the pier, waiting for the arriving boats, and the matches between the tourists and the rangers were made in seemingly random, but mutually consensual order.  I don’t remember how we got paired with ours – I guess the tour shop guy must have chatted him up, or something, but the whole process did not take more than 3 min.  Before we knew it, our 3-people group was teamed up with a family of 4 from Canada, and was led by a tiny local guy with a huge stick that all rangers carried.  Not sure how the stick, no matter how long, could stop a 70-kg dragon from eating a particular juicy tourist of their choice, but the rangers obviously knew more than us, and we have not seen one of them without this weapon.

The first dragons were spotted right after the National Park sign, lazing en mass around the rangers’ kitchen.  They were lying in the shade of the building built on stilts, and even though they were obviously relaxed and sated, you could see the little yellow reptilian eyes following everybody around with purely gastronomical interest.  Even in repose the dragons were impressive – big ones easily reaching 2 meters in length, claws bigger than a brickie’s hand, and satisfied smirks on their otherwise expressionless faces.  Our travel shop guy from Labuanbajo looked positively chuffed – he guaranteed that we would see a bunch of dragons, and now we could see his word was as good as gold.

We were also lucky to spot several giant lizards walking around in the surrounding jungle, while trekking through the area with the ranger, and listening to Komodo dragon stories he was telling non-stop in an English that could easily beat in fluency and range of vocabulary quite a few of my colleagues with a bunch of PhDs…

All rangers (and we chatted with a couple while observing the lazy dragons by the kitchen), treated the lizards with reverence and respect.  “The dragons were the first here”, they explained, “and will be here long after we are gone”.  This deserves respect.  Besides, the lizards may look slow and stupid, but they can be very quick and cunning when they want to be, so underestimate them at your own risk.  They routinely kill deer and water buffalo, so dealing with a couple of pokey tourists would not present the least bit of a problem for them.  Komodo dragons have long been claimed to have a venomous bite, but the toxins in their jaws would not be strong enough to immediately kill a large prey.  However, together with coagulants contained in their saliva, the Komodo bite, if not treated, will eventually lead to death.  After the dragon bites its prey, it follows it with purely reptilian determination and indifference for days until the animal dies, and allows for a peaceful and uninterrupted feast.

Komodo dragon in action (not hunting, but just walking purposefully through the jungle) is definitely a sight worthy of reverence.  We saw one just minutes away from the rangers station – full of stately demeanor of a pure-bred, if only grossly over-sized English bulldog, he walked through the grass quietly with royal indifference in his gaze, yet still a cold-blooded “I’ll eat you and the horse you rode in on” reptilian attitude.  The rangers and tourists parted respectfully, admiring the giant prehistoric lizard, and acknowledging it as a force to be reckoned with.

The Rinca island itself (or at least what we saw of it during our 2-hour trekking), came straight out of the Jurassic Park films.  The jungle was cool and quiet (although full of blood-thirsty mosquitoes), and the fields with tall and skinny palm-trees in the background, called for dinosaurs to be running through them, and pterodactyls gracefully gliding through the skies above.  They would fit right in!

True to our word, on the way back to Labuanbajo we skipped the snorkeling part altogether.  We did, however, stop at a paradise island of Kanawa for a quick swim in the clear turquoise waters, and a stroll on a beautiful and empty white sandy beach.  Yes, this is the life we ordered – bring it on!  The island had a pier and we could see a couple of bungalows scattered around under the trees, but beautiful as the island was, I would not want to stay on it longer than we did.  A quick dip, walk and a look of admiration, and we’d rather return back to even relative civilization, where we could talk to people, drink home-made palm rum drinks at Le Pirate, (which we should have declined!) and pack our bags for the continuation of the trip.